At a press conference, Schwarzenegger’s comments were short, but hit a sour note among California’s pier anglers.

“You are mine now! You belong to me!” exclaimed Schwarzenegger. It was not clear if Schwarzenegger was speaking about the Balboa pier collapse, or if he was simply quoting lines from the 1990 film, Kindergarten Cop.

What is clear is that the Governor has called for the immediate closure of all piers in the state, until such time as they can be inspected and deemed safe.

When asked when the piers might be reopened, Schwarzenegger only stated, “You forgot the second rule in a crisis situation…”

He did not comment further, leaving many pier anglers and residents of the quiet Newport Beach community to wonder about their beloved pier.

Another run of Humboldt Squid occurred in 2011. 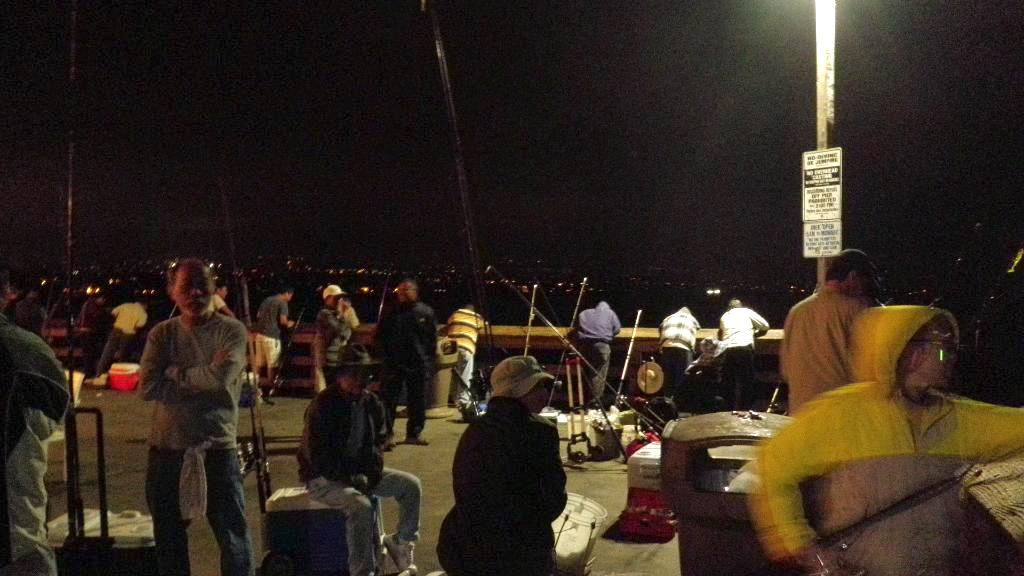 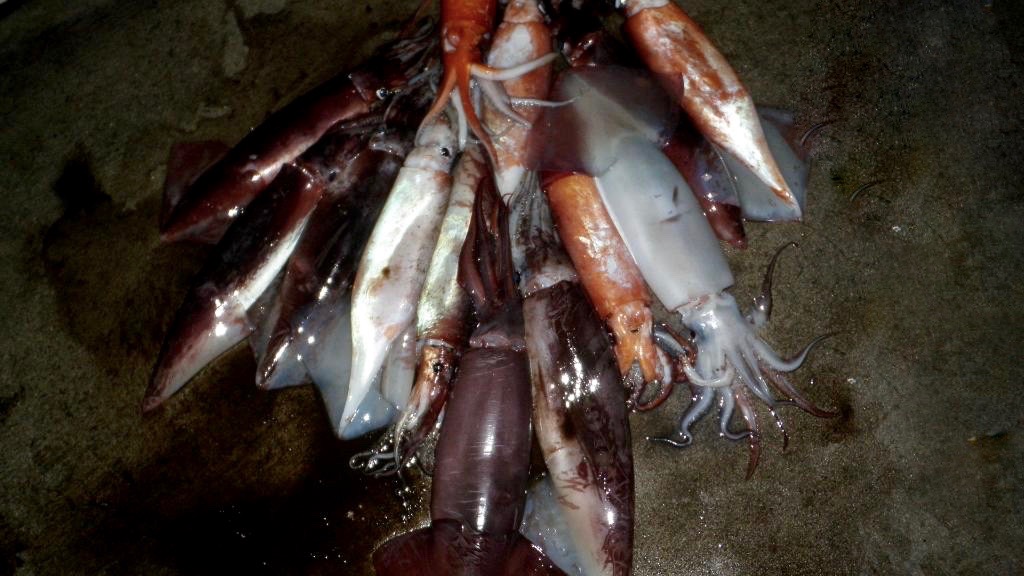 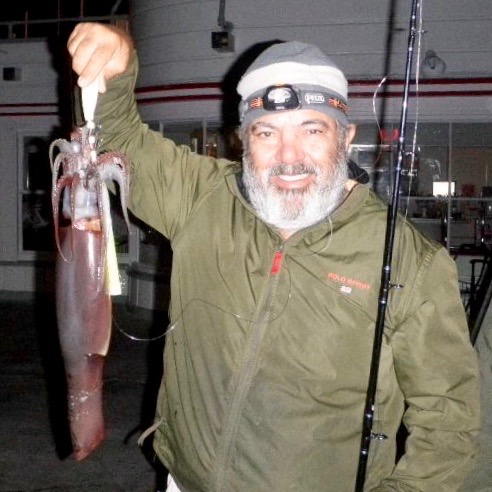 <*}}}}}}}}}>< — During the 1930s and its big band era, the Balboa Pavilion became a favorite stopping spot for bands such as the Benny Goodman orchestra, Count Basie, The Dorsey Brothers, and Phil Harris. It also saw its share of marathon dances during that crazy period. One dance step called the “Balboa,” the “Balboa Hop,” or the “Balboa Shuffle,” originated at the pavilion and apparently swept across the country for a short period of time.

<*}}}}}}}}}>< — It’s always nice to have a restaurant or snack bar on a pier where you can get a bite to eat without walking off the pier. Ruby’s Diner at the Balboa Pier is special given its status as the first Ruby’s and the fact that it replaced the old bait and tackle shop out at the end of the pier.

NEWPORT BEACH — During Doug Cavanaugh’s 18 years as a Balboa Island resident, he spent a lot of his time exploring the area. He frequented the beach and took long runs along the shoreline. Little did he know that his love affair with a dilapidated, abandoned structure at the end of the Balboa Pier in 1980 would later house the first diner in the Southland phenomenon known as Ruby’s Diner.

At 26 years old, Cavanaugh convinced longtime high school friend Ralph Kosmides to venture into a new dining experience that focused on good food at low prices in a 1940s setting. In 1982, Cavanaugh convinced the city of Newport Beach to allow him to build a diner from the existing 1940s bait shop. The terribly neglected facility had been vacant since 1977.

Costs associated with the building’s rehabilitation would leave Cavanaugh and Kosmides penniless. Prior to the diner’s grand opening, the two business partners nervously wondered if they had made a mistake. The smiles from curious passersby would later ease their minds. “It was the first indication that we had a success on our hands,” said Cavanaugh, now the president of Ruby’s. “People were looking for a simpler time.”

And they found it in Ruby’s, Cavanaugh said. Cavanaugh named the diner after his mom, Ruby Cavanaugh. Ruby, who lives in Tustin, resisted when Cavanaugh first told her he would be naming the diner after her. Ruby’s love of the 1940s era was the inspiration for the restaurant. She gradually became comfortable with the idea. “She really likes seeing her name in lights,” Cavanaugh said. He said his mom never hesitates to sign a place mat in crayon for a child. The black-haired woman adorning the menus is a carbon copy of a youthful Ruby.

Today, there are more than 30 Ruby’s restaurants nationwide. Diners can also find a RubyBurger in Terminal Six at Los Angeles International Airport or Terminal D at the airport in Las Vegas. Changes coming in 2000 include new breakfast and dinner items.

Ruby’s will be temporarily closed for three weeks starting in November while the city replaces some of the wood pilings holding up the pier. Many of those pilings went up in 1940 after storms in the late 1930s destroyed the original Balboa Pier.

When Newport Beach Chamber of Commerce president Richard Luehrs joined the chamber in 1982, he said one of his first duties was to welcome the new business team of Cavanaugh and Kosmides. “I have watched them grow up over the years,” said Luehrs. “And I have had more than my fair share of RubyBurgers.” Luehrs said the management at Ruby’s has been very proactive and supportive of the Newport Beach community. Cavanaugh said the secret to success for Ruby’s is the food. “Why do people go out to dinner?,” Cavanaugh said. “They go to get a good meal.” Cavanaugh said a lot of restaurants go out of business because they rely too heavily on environment and entertainment. Both are important qualities, Cavanaugh acknowledged, but if the restaurant is not focused on food and service, it won’t make it.

The Newport Center-based company plans to open several more Ruby’s locations nationwide in the future. And what is Ruby’s favorite item at Ruby’s? “Just a good old-fashioned RubyBurger,” Cavanaugh said. 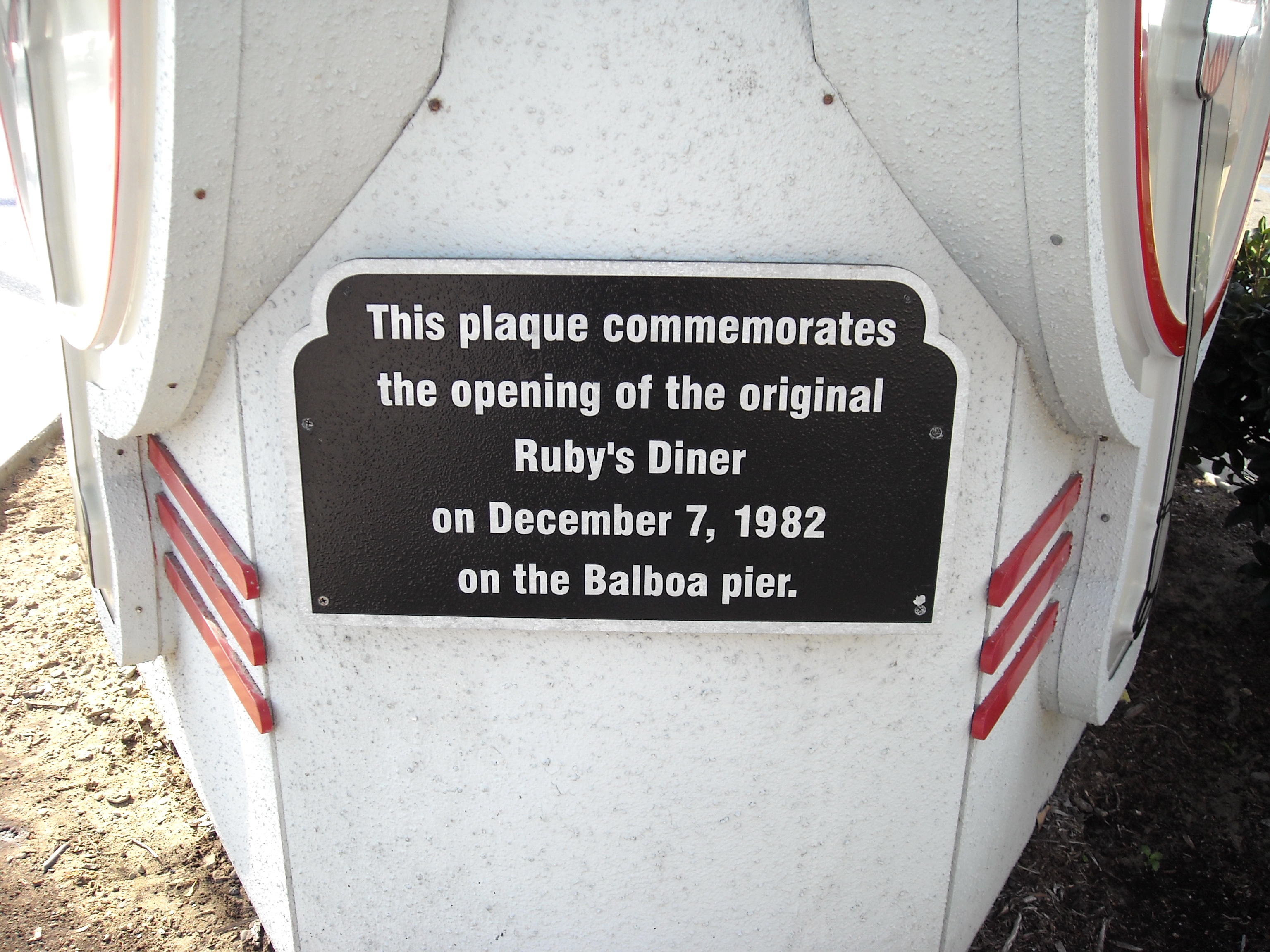 <*}}}}}}}}}>< — When this 35-pound yellowtail were reported to the PFIC Message Board in 2003 the report generated quite a bit of comment since the angler had falsely reported previous catches (including this report of catching an albacore tuna in Newport Bay). Although the catch was verified it did turn out more than one angler had fought and caught the fish. Still, it was an excellent catch. 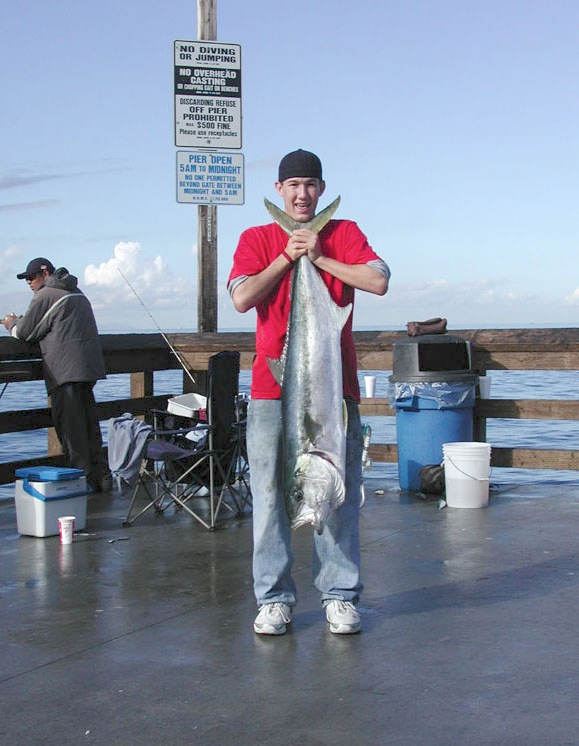 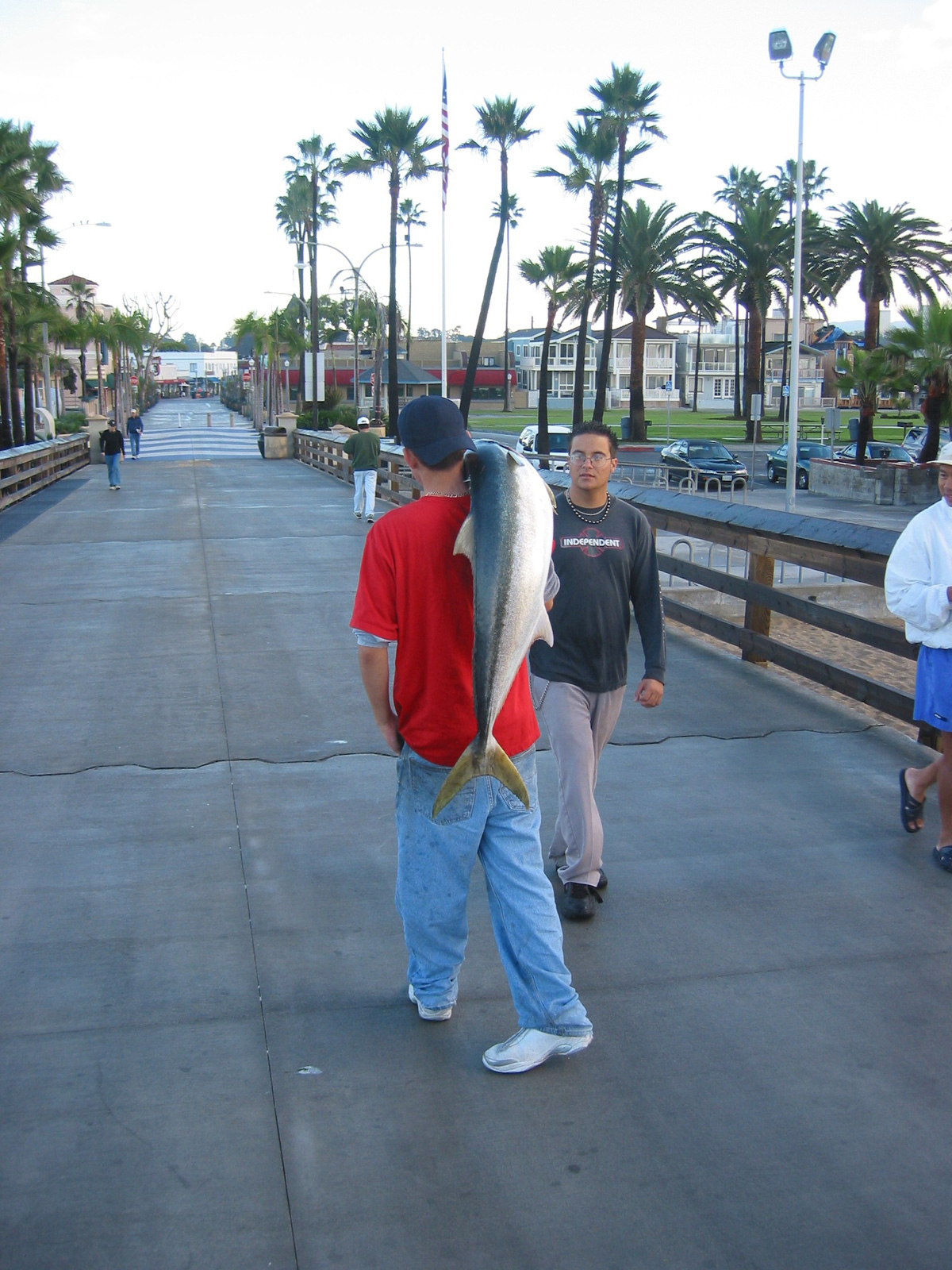 <*}}}}}}}}}>< — When I discuss the species of fish found at individual piers I use my own anecdotal records going back to 1962, traditionally published reports (DF&G or newspapers), and, most recently, reports submitted to the Pier Fishing in California (PFIC) website. I feel my information is fairly extensive and accurate. Nevertheless, it cannot be as complete as information that is compiled by a person or group who visits a pier on a weekly visit—especially if the visits have taken place as long as mine—nearly five decades. In the case of Balboa and Newport we do have such a record.

Snookie and Bob Anderson, who is part of her group, are both naturalists that, like me, keep detailed records of the fish they catch and see. In 2007 Bob was kind enough to share with me a list of the fish that he and Snookie had seen at the Newport and Balboa piers. The list includes (1) species that he or Snookie personally caught, (2) fish that were caught in the bait nets they use to capture their halibut bait, (3) and fish they have seen others catch. Many times Snookie has had to identify pier-caught fish and by use of her well-thumbed Peterson Guide to Pacific Coast Fishes she’s been able to identify what might be an uncommon or even fairly rare species.

As for the list itself, I think it reflects the fairly unique fauna of the area, one influenced by both the nearby Newport Bay and the deep-water Newport Canyon. Bob’s list includes 87 species. However, a new species as noted on PFIC was caught from the pier in April of ’08, a big skate (Raja binoculata). In addition, there are several species that I have caught at the Newport Pier that are not on the list. KJ species—calico rockfish/1976 & 1977 (Sebastes dallii), olive rockfish/1976 & 1977 (Sebastes serranoides), starry flounder/1962 (Platichthys stellatus), longjaw goby or mudsucker/1962 (Gillichthys mirabilis), silver surfperch/1962 (Hyperprosopon ellipticum), and basketweave cusk-eel/1962 & 2002 (Otophidium scrippsi). Taken together, the total number of species would now be 94.

Lastly, I note with interest the recent change to the listed southern range of sand sole. According to the Resource Inventory of Marine and Estuarine Fish of the West Coast and Alaska (Love, Mecklenburg, Mecklenburg and Thorsteinson, 2005), the southern range for sand sole is the Balboa Pier. This is in contrast to most (older) guides that list the southern range as either Port Hueneme or Redondo Beach. It my belief that the change is due to a 15-inch-long sand sole caught at the Balboa Pier by Snookie on February 3, 2005. She reported the catch later that night to the Pier Fishing in California Message Board and I believe that report led to the change to the southern limit. 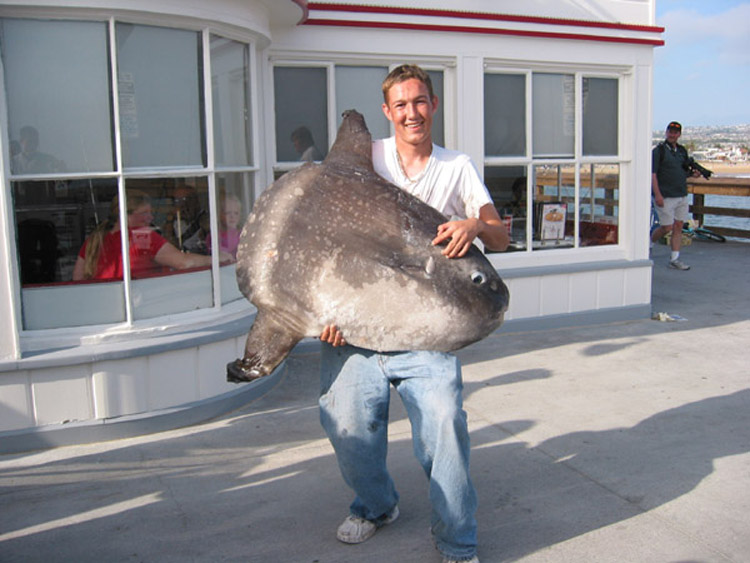 Mola Mola are occasionally seen from the pier and sometimes snagged. Since they are basically inedible there’s no reason to hook one.

February 1999 — We’ve got a new reporter for the pier, Snookie, who says, in her own words, “I fish Balboa two times a week, every week of the year. I have done so for 55 years. Yes, I’m a fishing addict.” Welcome aboard Snookie! Her first report, on January 19th, said, “today was awful. It’s typical a January. There’s not much in the way of live bait. The fish being caught are small mackerel and sardines. One thornback and one barred surfperch were the catches today. At least the city is replacing the missing pilings from last spring. Once that is done, we will have peace on the pier again. Balboa Pier is one of the best whale watching piers. It has deep surf and they come in to shore regularly. If the fishing isn’t good, the whale watching is.” A later report said much the same—“as to a report from the Balboa Pier this month, it is not going to be encouraging. There have been the usual mackerel and big sardines, but the halibut and the surf fish have been far and few between. If you like thornbacks, there are plenty of those. It’s just that time of year. The live bait situation has been terrible. There have been some smelt in the surf area. They were small schools of a dozen to two dozen. Hard to get them excited about the chum to get them into the net.”