Many anglers looked into our buckets as they headed out toward the end. Since they didn’t see any fish they assumed we hadn’t had much luck. However, nearly everyone in the group had caught at least one halibut, which brings up points four and five. Point four is that regulars like these know how to catch the fish and do so on a regular basis.

Point five is that the mid-pier area of the pier, the area where Snookie’s group always fishes, is usually the best area for halibut. It may not produce as many pelagic species as the end areas but it definitely is the best area for the elusive, good-tasting and most-prized flatfish. 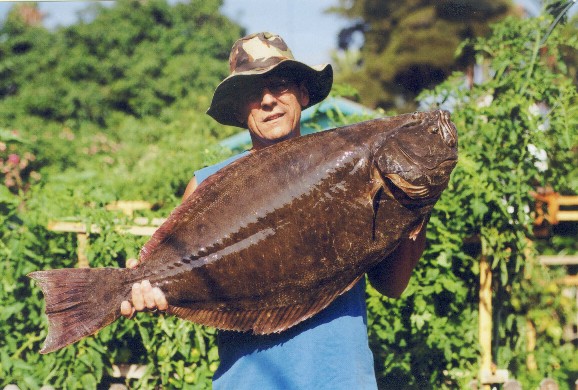 A point I should repeat is to make sure you have a net (or pier gaff) with you in case you do hook a big fish. Earlier on the same morning that I met Snookie’s group, I had tried fishing the end area. Not too much was going on except for an occasional mackerel. One of the meat fishermen out at the end seeking mackerel was tossing out a multi-hook outfit that had a heavy line and about eight-ten size 2 hooks. On the bottom was a 3 or 4-ounce sinker and a couple of feet above the top hook was a heavy float that kept the rigging floating near the top of the water. The fish (mainly mackerel and a few lizardfish) would hit the bait, his float would disappear under the water, and he would pull in the fish. Since he was using a fairly heavy rod there usually wasn’t much of a fight. However, that would change.

One hit yielded resistance that he hadn’t previously seen and it took several minutes before his rig was near the top of the water and the fish could be seen. Imagine his (and my) surprise to see two mackerel together with a beautiful salmon that I estimated to weigh 10-12 pounds. Unfortunately, a net wasn’t present and he tried to hand line the fish to the top of the pier. About half way up to the pier the fish gave a shrug and the line broke. Fish: one, angler: zero. With a net he would have had a rare and distinguished prize for a southern California pier (although I’m not too sure if it would have been a legally caught salmon). As it was, he was left only with the memory 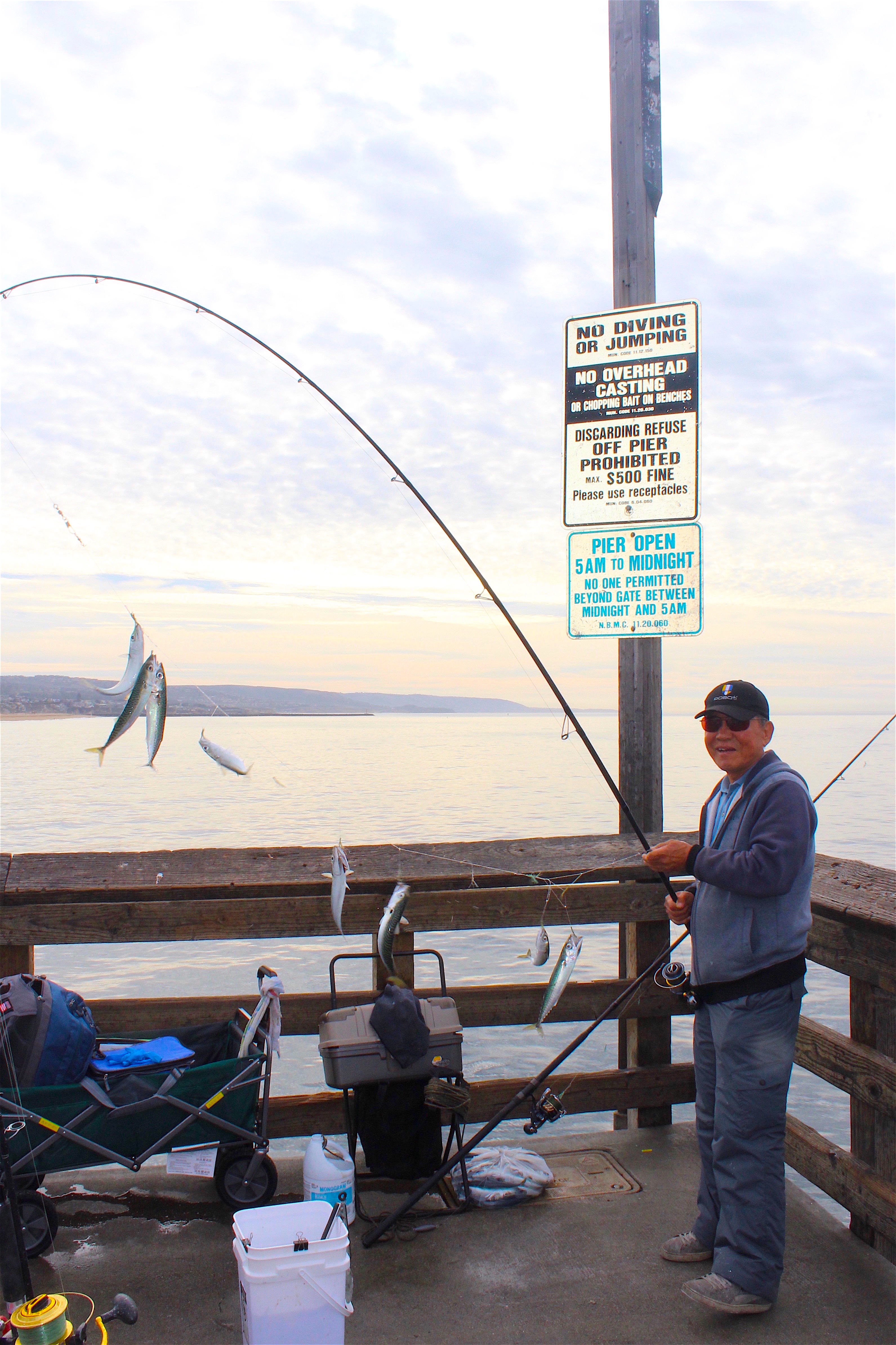 A plethora of mackerel caught on a Sabiki bait-rig; I am not a fan of using the Sabiki’s  for mackerel but I seem to be in the minority

Fishing Tips. Check out the far end of this 920-foot-long pier when you begin to fish. As mentioned, because of the water depth, this can be an excellent pier for the pelagics—Pacific mackerel, jack mackerel and bonito. Most of the mackerel are landed on Sabiki/Lucky Lura-type bait rigs or on strips of squid (or pieces of mackerel) fished under a float.

Most bonito fall to feathers trailing a cast-a-bubble or similar float. This deepest water is also typically the best spot to pick up Pacific and longfin sanddabs if they enter the catch. 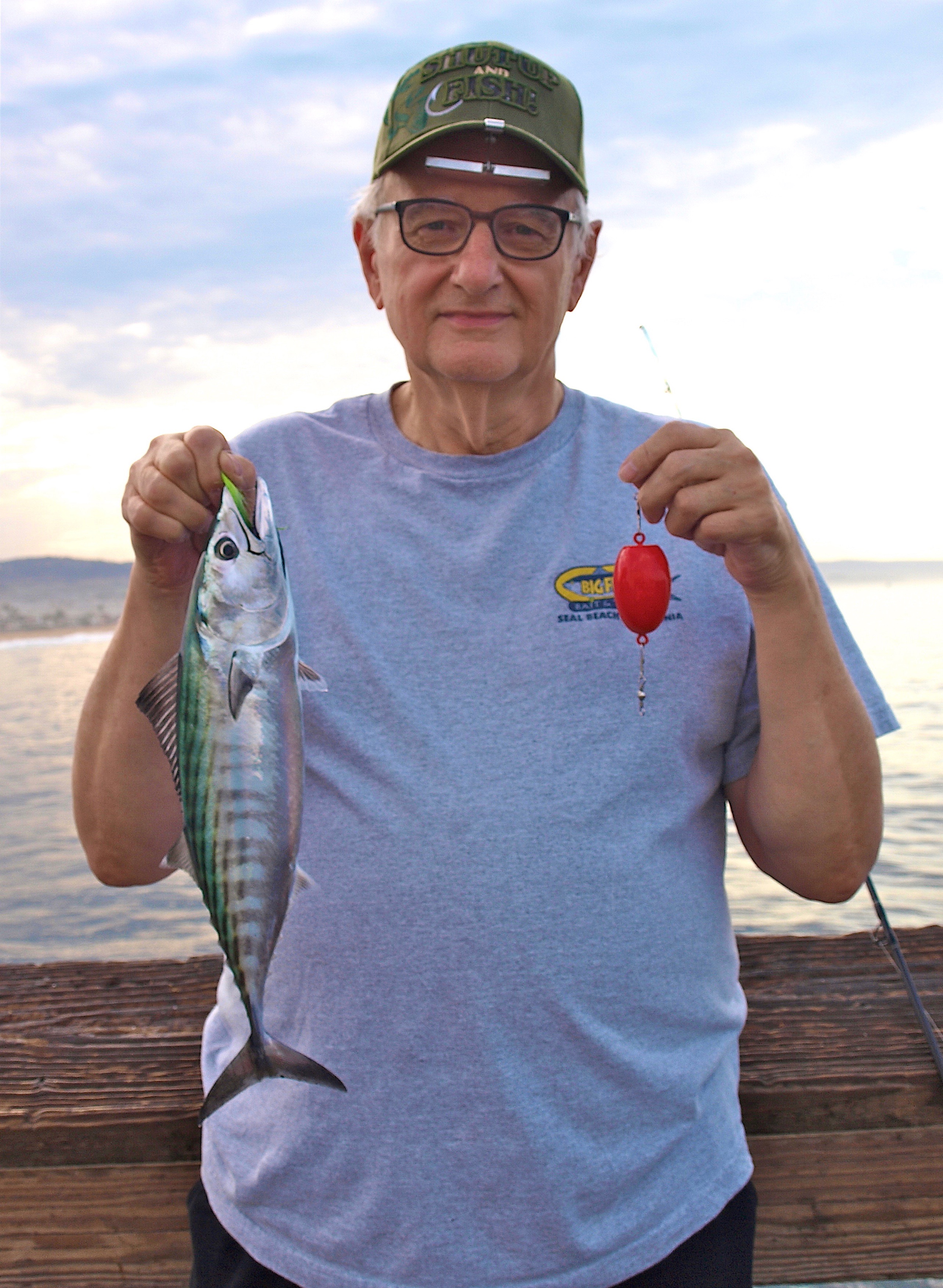 The far end is also the best area for the larger sharks and rays and many good-sized shovelnose sharks (guitarfish) and bat rays are landed at the pier. In addition, this is where you’ll occasionally encounter the pelagic species of sharks, species like thresher sharks and blue sharks. Although the threshers may show up at almost anytime, late spring seems best. May of 2009 saw quite a few of the tail thumpers landed with the largest at around 8-foot in length and 80 pounds. Several much bigger threshers, some estimated at 150-200 pounds were hooked but not landed that year; most were lost at the pier, which is often the case with big fish. The standard rigging was a live mackerel on a slider. 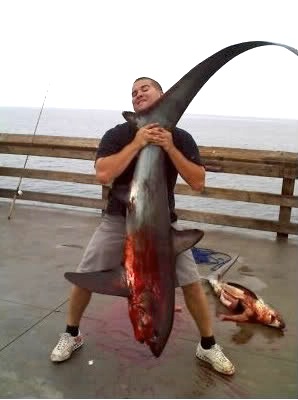 I’ve never personally seen any of the larger sharks caught at the pier but Snookie has caught threshers to 36 pounds and witnessed several LARGE sharks swimming by the pier. Most impressive were a 30-foot-long basking shark that leisurely cruised along the pilings one day, a great white estimated at 20-feet, and a pair of hammerheads, one 8-foot-long, the other estimated at 10-foot-long, that also checked out the Balboa action. All sound pretty interesting. 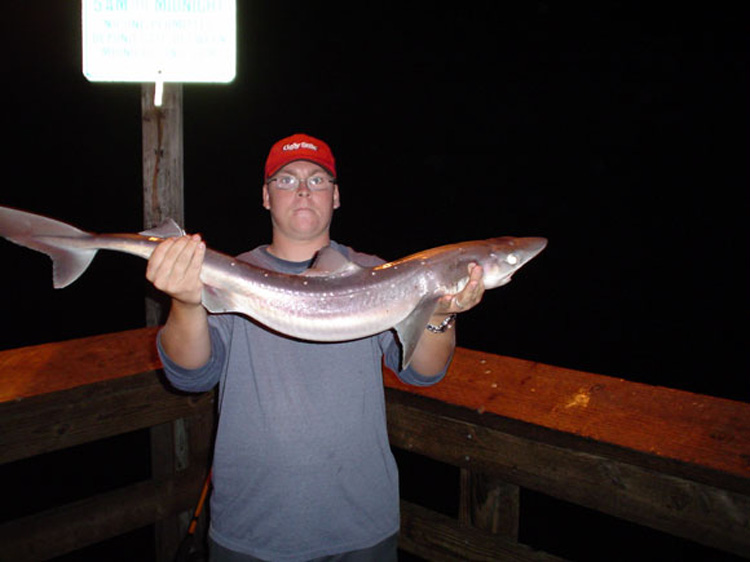 Spiny Dogfish are an occasional catch

Probably the most famous (and perhaps controversial) shark at Balboa was a fish that wasn’t actually caught from the pier although it was close—approximately 100 yards out from the end of the pier. Ted Phegley, a local commercial fisherman fishing from his 16-foot dory boat, took the shark, an estimated 12-foot-long, 1,400-pound great white, on January 29, 1960. Although Phegley was fishing for white sea bass, he managed to net and capture the huge great white which, at the time, was considered one of the largest “whites” ever taken along the Pacific Coast. It was soon hauled into shore and hung up on block and tackle near the Crab Cooker Restaurant in Newport Beach.

That weekend, crowds estimated at 20-50 thousand people swarmed to Newport Beach to see the “man-eater.” I say controversial simply because part of what you just read may not be true. It is based upon newspaper accounts that appeared at the time of the capture (and which are posted on the wall at the Crab Cooker). When I asked “Snookie,” our local Orange County expert to review the section on Balboa Pier she sent me the following: “Ted Phegley’s shark was actually 11 feet, 2 inches long and weighed 775 pounds. He was assisted in the landing by the 40-foot commercial fishing boat Crusader who passed by, hove to and helped Phegley land the shark. They used a winch to get the shark to the top of the water and then looped a rope over its tail to make it immovable. It was taken to McCarthy’s Dock in Newport and hoisted and weighed still alive. It almost snapped a 4 x 6 dock rail in two with its teeth in a last effort to escape. 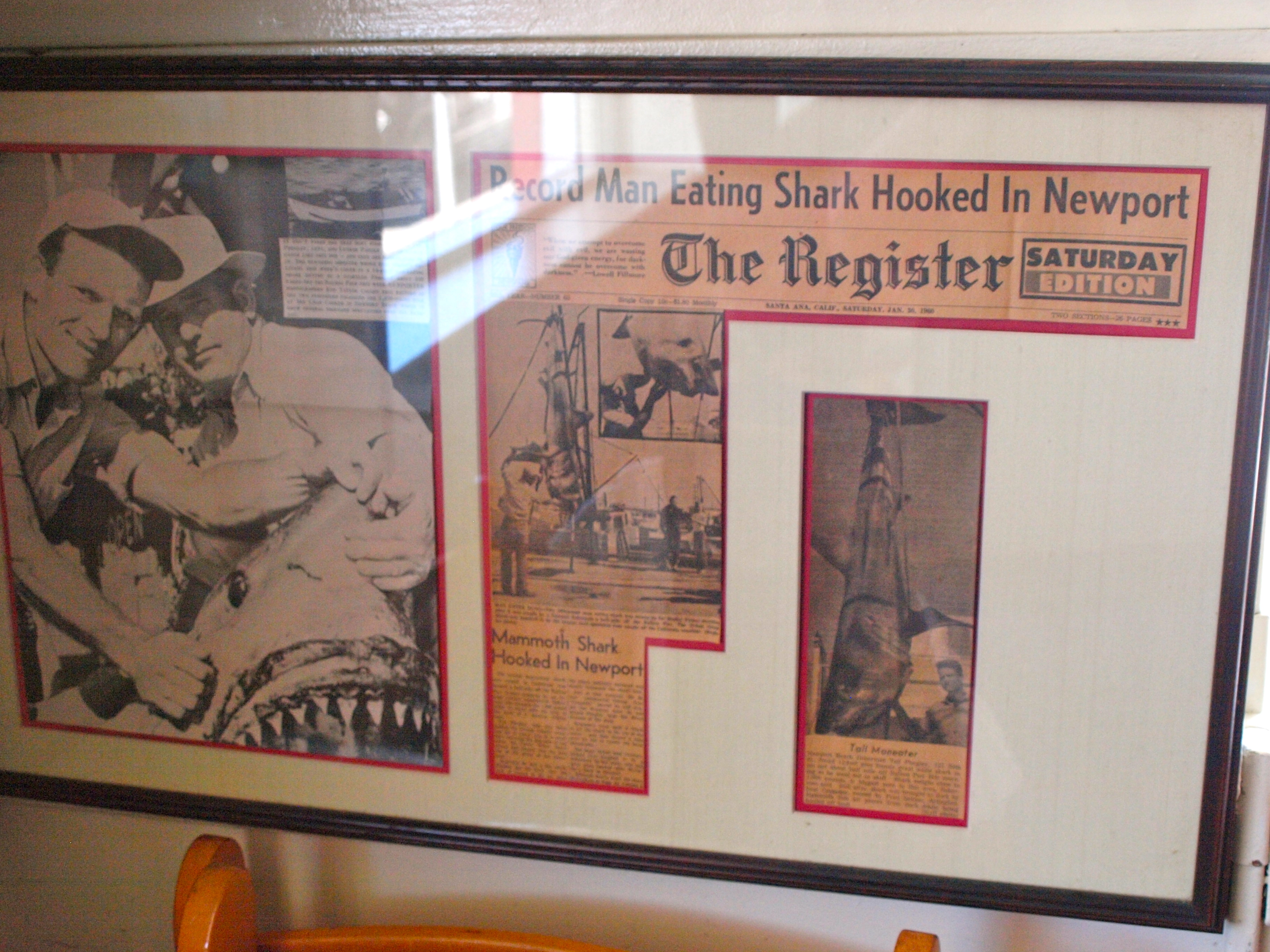 This was the second great white for Phegley. The July before he hauled in a smaller one in approximately the same location.” Now I know that some of you good readers think that newspapers are always accurate and filled with stimulating, factual information (which is, of course, never biased) but I have a lot of faith in “Snookie.” Whatever the size of the fish, (and there’s quite a measurable mathematical difference between 775 and 1,400 pounds) there is no disagreement that the fish was huge.

Today the fish is stuffed and hangs in the main dining room at the Crab Cooker. Sort of a stuffed fish watching human’s stuff themselves on fish. If you visit the restaurant do make sure you view the fish and also look inside the mouth at the rows of teeth. Behind the main row of teeth are several other rows of teeth ready to slip down and replace teeth that the white has lost for whatever reason. 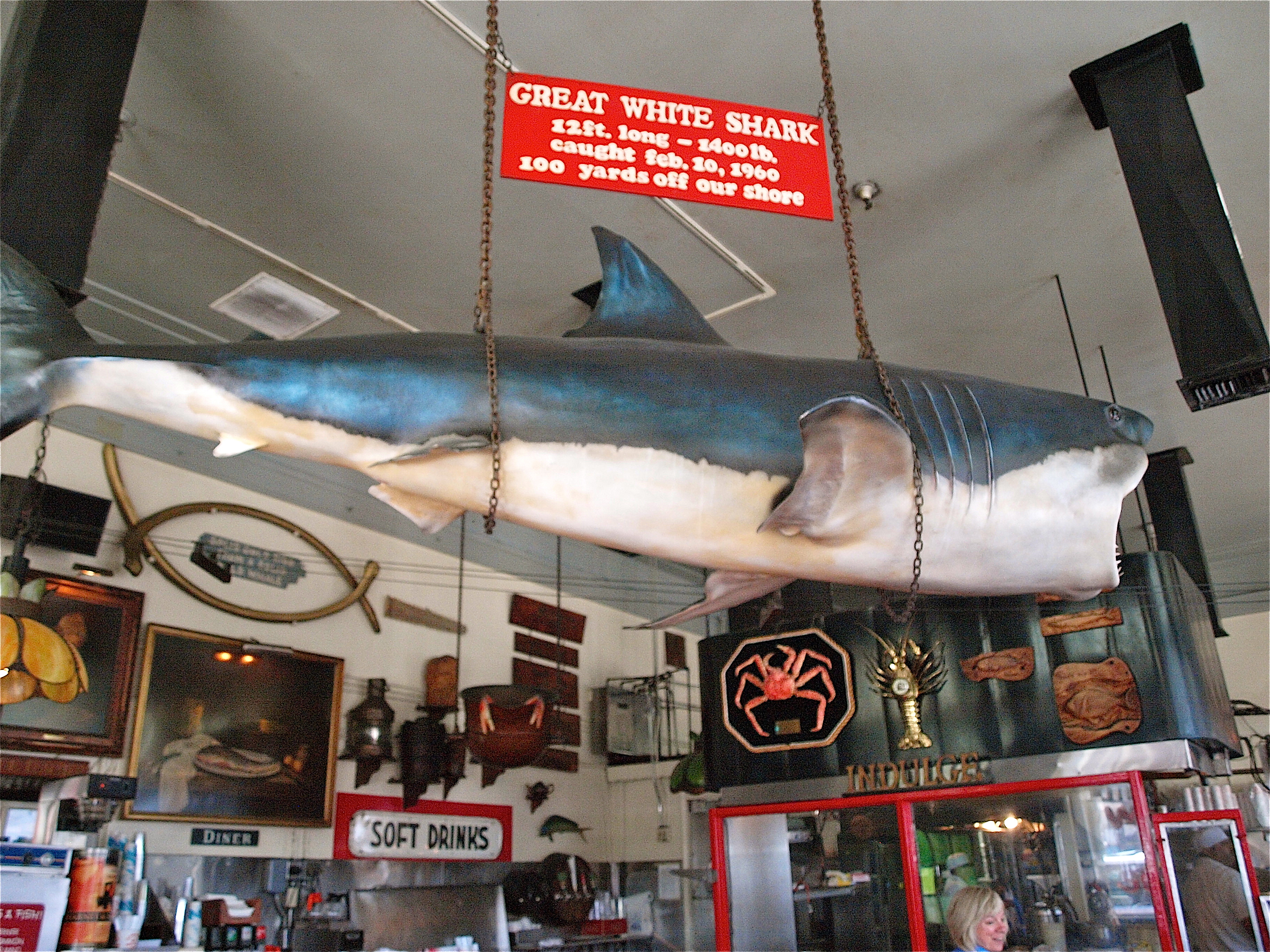 Back to fishing! A few bass will also enter the catch, both sand bass and kelp bass (calico bass), and most of these will be taken from the mid-pier area to the end. Live bait on the bottom is the best bait for the bass but they will also hit on cut anchovies, strips of squid, and occasionally on lures.

Gray smoothhound sharks can be taken from the inshore area to the end while leopard sharks are more common from the mid-pier area to the end. However, neither species is really that common at the pier. Horn sharks are also uncommon although a 32-inch-long horn shark was reported in January of 2004. What are sometimes too common are thornback rays, a fish that has kept many an angler from being skunked. The inshore waters may also yield some round stingrays and an occasional butterfly ray but both are far less common than the throw-‘em-backs (which do not contain enough meat to save). 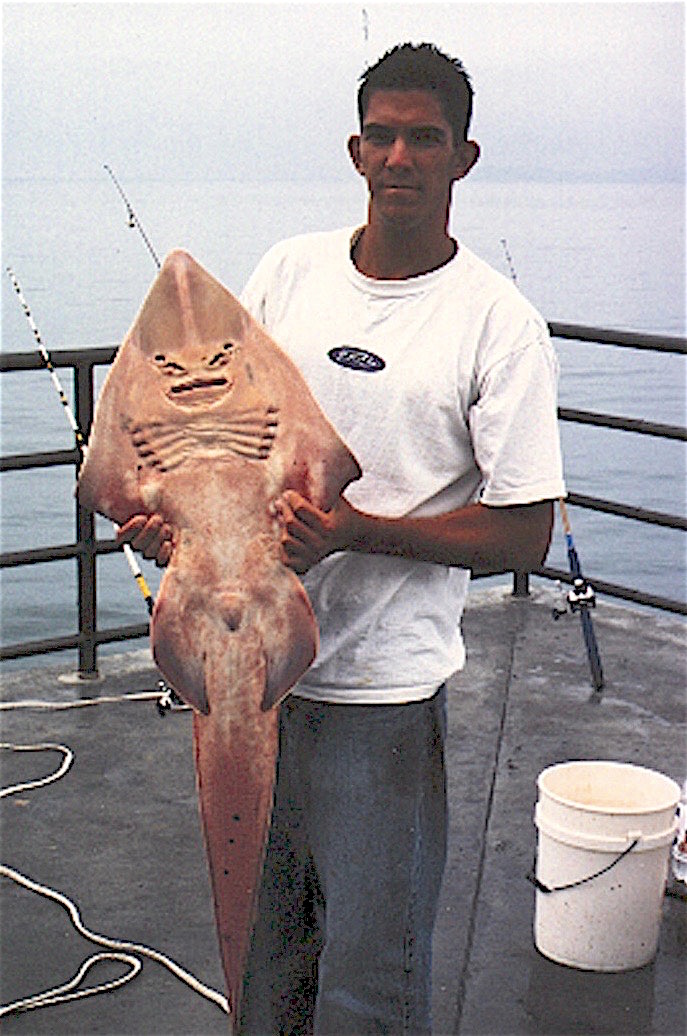 For many anglers, especially some of the “regulars,” the mid-pier area is Shangri-La. Disinterested in mackerel, this group is primarily after halibut and this area offers the best chance for the tasty flatfish. The best rigging is a typical halibut rigging, a Carolina-type sliding leader baited with a live smelt, grunion, anchovy (if you can net some), or small queenfish. If you can’t get live bait, use frozen or salted anchovy. Use a whole (small) anchovy, or cut anchovy if the bait is large. Hook the bait through the rear portion of the bait and be prepared to let the halibut mouth the bait a while before striking. While the majority of the halibut that are caught are too small to keep, legal fish (some over 20 pounds) do enter the mix. Some extra large, “barndooor-size” fish have also been seen—but few have been landed. 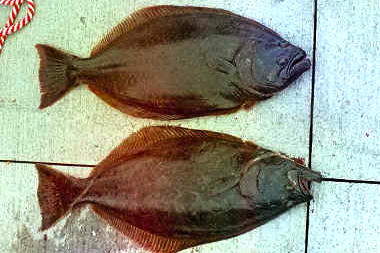 Artificial lures can also produce some hallies although they are best used when the pier isn’t too crowded. Regulars use a variety of swim-bait-type lures and while Scroungers once were favored many have switched to Big Hammer and other varieties. I’ve been told that the larger-size lures, especially the bright green colored ones, can be deadly on winter halibut, the fish that are often the largest of the year.

The same mid-pier area and the same live baits (especially small queenfish) can at times also yield white sea bass but unfortunately most that are caught are (just like the halibut) too small to keep.

This mid-pier area is also usually the best area for the smaller croakers, sculpin and perch. For medium-sized tomcod (white croaker) and the larger herring (queenfish), use a high/low leader with size 4 hooks, and small strips of anchovy as bait. The same rigging can be used for sculpin (California scorpionfish), but squid is better bait for these good eating fish. Records, by the way, show that the best time to catch the sculpin is at night, and that the winter through spring months offer the best fishery for these fish. Balboa is one of the best piers to catch these scorpionfish.

Use small snag lines (self-made) or the Sabiki/Lucky Lura/Lucky Joe-type bait rigs for the smaller queenfish, walleye surfperch, pompano (Pacific butterfish), topsmelt and jacksmelt. Schools of the larger jacksmelt typically show up October through February and when they do many anglers will specifically fish for the hard fightin’ and good eatin’ “horse smelt.” In addition, reports indicate some halfmoon (aka Catalina blue perch may occasionally show up, usually in the summer, and they too will be taken on the bait rigs. Ditto zebraperch; Snookie reported getting a 12-inch zebraperch in August of 2002. 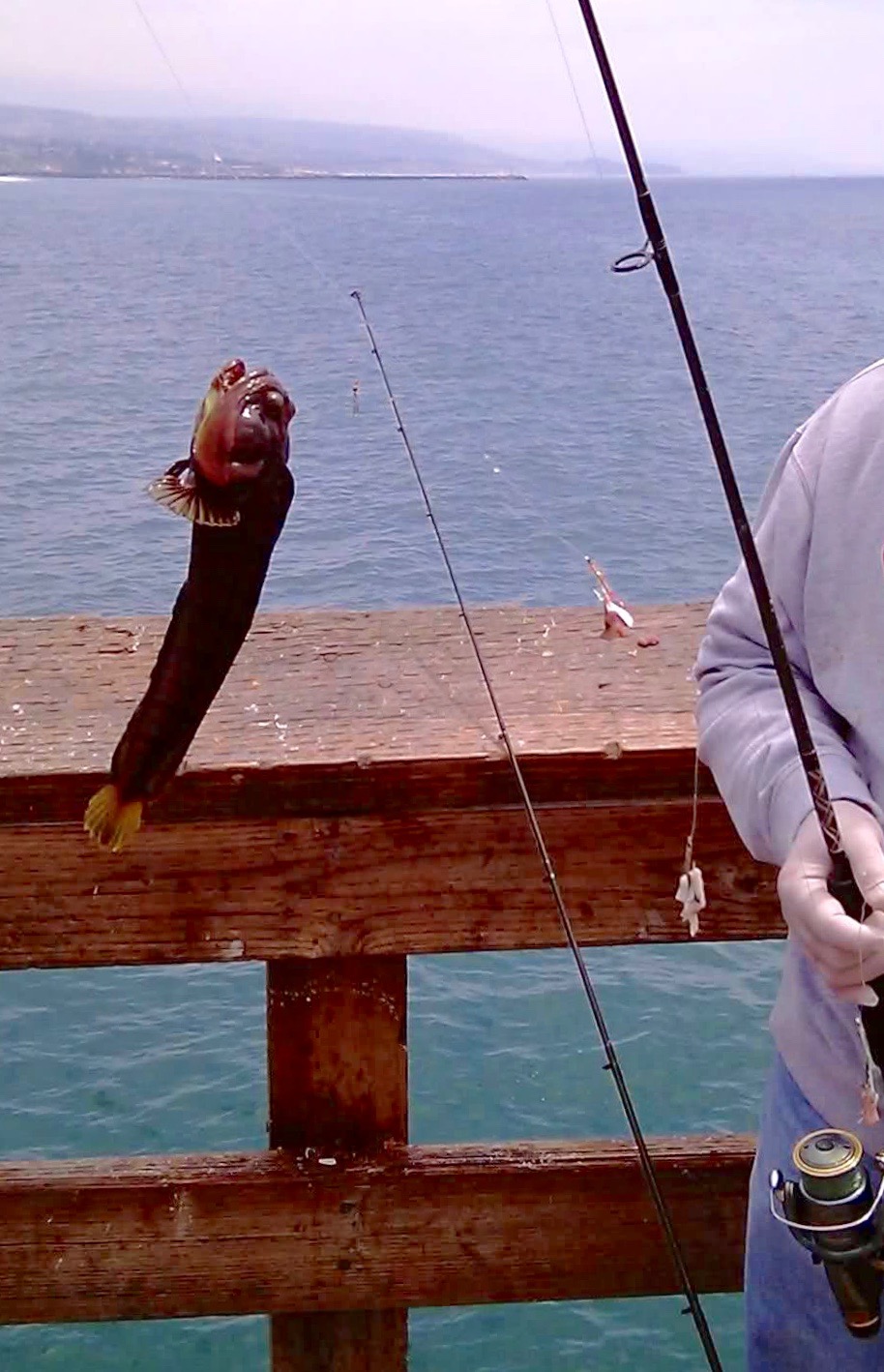 Sarcastic fringehead are much more common in the bay

This is a also a pier where you may occasionally encounter small, juvenile rockfish, especially if you’re using a bait rig set-up and make the mistake of letting it get down near the bottom in the deeper water. In fact, I even caught some baby bocaccio here back in 1974. Although I only caught a couple of the small fish, they were the same fish that (in those years) invaded the waters around central California piers each year and provided hours of fun for the “snapper” fishermen. With the drastic decrease in the number of bocaccio along the coast, they are much less common at piers today (although I did catch two bocaccio at the nearby Newport Pier in June of ’99.) Balboa Pier is, by the way, the southern limit for my pier-caught bocaccio. Citizen’s Dock in Crescent City, up near the Oregon Border, and nearly 900 miles away, is the northern limit. A larger rockfish, a grass rockfish, was landed by Snookie in July 2003.