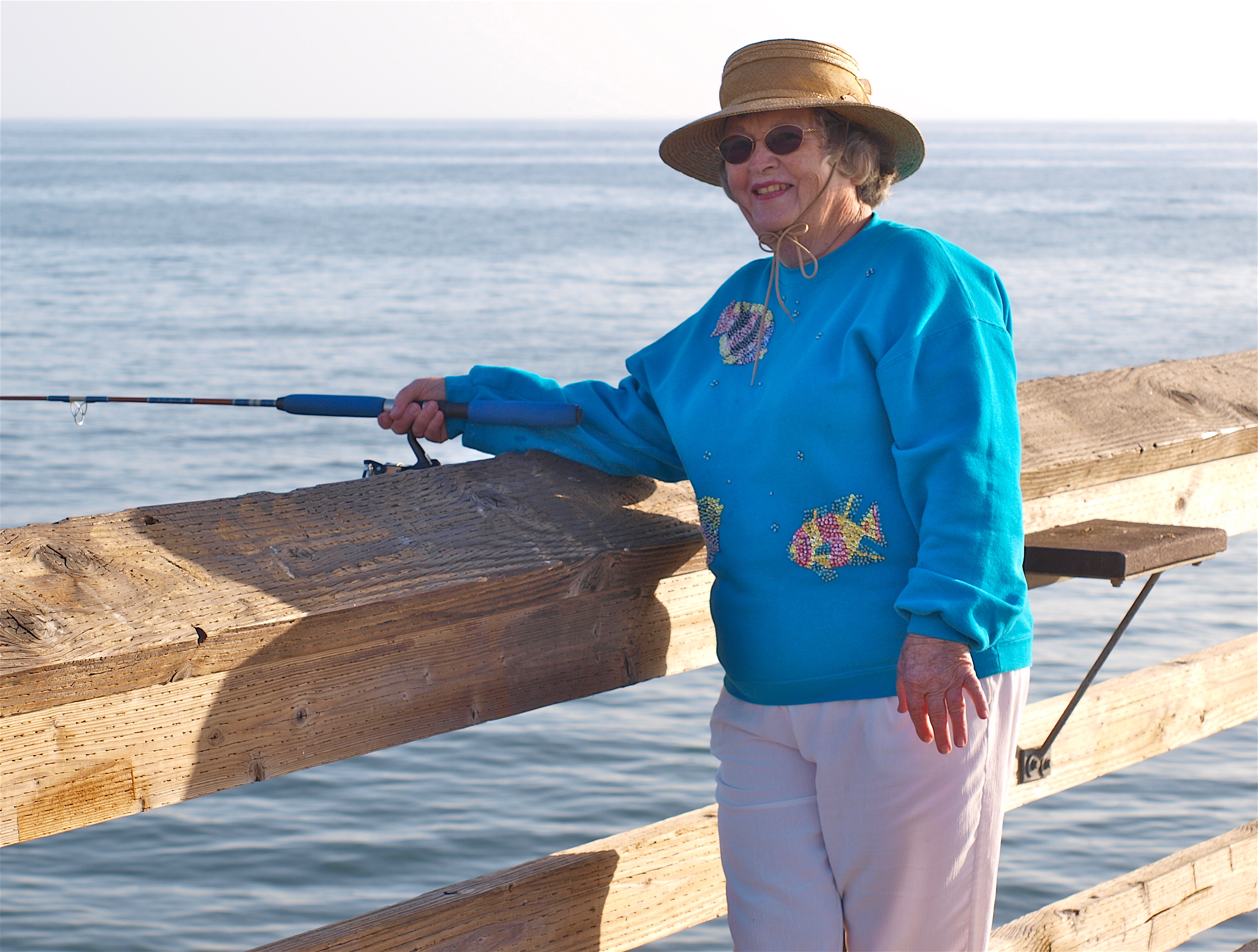 These Folks Fish for the Halibut

Vernona (Snooky) Fath has been fishing off the Balboa Pier since 1945, when she was 9 years old, dropping her line from the pier two to seven days a week in pursuit of her favorite, halibut.

Fath was taught to fish by her mother, Sunny, who is now 76 but still never misses an outing. They are both a part of the regular Balboa bunch, a cooperative crowd that works together in keeping the bait buckets filled and netting their neighbor’s catch.

“Our group tends to share,” Fath says. There are about two dozen regulars on the pier, folks who, like Fath, have been fishing there much of their lives. “We have a terrific camaraderie,” she says.

It’s been a tough year for halibut, largely because of the cool weather and rough waters, and Fath has yet to catch a halibut legally big enough to keep (at least 22 inches) this season. But her mother caught a 12-pound keeper last week. Fath might catch three legal halibut in a typical season, although she can bring in as many as 15 undersized halibut in a single outing.

“Here in recent years,” legal halibut “come few and far between,” says Ed Dillon of Baldy’s Tackle Shop at the foot of the Newport Pier. 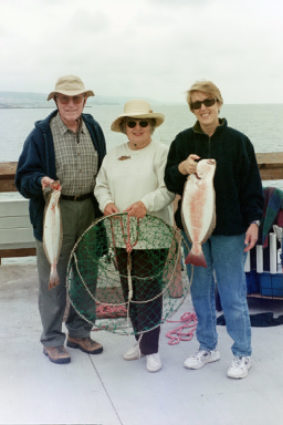 Snookie, Bob, her daughter and a couple of Snookie’s favorite fish—halibut, 2003

Besides halibut, fish caught from local piers can include mackerel, bonito, sand shark, sculpin, surf perch, corbina, herring and jacksmelt, and a few rarities such as barracuda, yellowtail and even salmon. Some fish appear only seasonally.

These days, many people on the piers are lower-income families fishing for food rather than sport. They tend to go after such plentiful fish as mackerel and herring.

Dillon said a good basic outfit might include a medium-weight rod (“You do have to lift the fish 15 to 20 feet up out of the water”), 20-pound test line, and a shrimp fly for most of the common fish. The equipment can be rented at tackle shops. At Baldy’s, rental for a rod, reel, line, hook and weight runs $2 an hour, $7.50 for the day.

Fath has her own recommendations, which include a lighter line (12-pound) and live bait such as sardines, which she catches herself with a “snag line,” a line with a series of small hooks that is bobbed up and down in the water.

Reeling in the years

You should have been at the pier the day Warren hooked a near-keeper halibut. Oh, Warren has hooked plenty of keepers in his time, but he’ll tell you fishing isn’t about what you take, it’s about what keeps you coming back.

Anyway: This one halibut a couple of weeks ago–turned out to be 20 inches, two short of legal limit–had Warren moving. Bad hip and all, dang thing, he raced that halibut, staying just ahead of the hooked fish’s efforts to reach the pylons and wrap itself to freedom. Thirty feet below Warren’s bowed fishing rod, the young feisty halibut with the white belly challenged the 81-year-old fisherman, tanned like leather from so many long days in a sun that precocious halibut wouldn’t survive a minute.

Noble had a line dropped several feet up the pier (toward Ruby’s) and had to hustle to raise his rig to let Warren and the halibut scamper underneath. Snooky abandoned her reel and went for the drop met. She lowered the net in sync with Warren raising the halibut. Reeling, lowering, reeling, lowering until the flopping captive popped from the water and into the wide, circular net fixed to a thick rope, Snooky’s good with the net. Snooky’s good with everything out here.

Out came the measure, up-short came the halibut, over the edge went the 20-incher and back for more bait went Warren, his old, small face lit as if a boy again.

Milton was there that day. Cass might have been. Bob wasn’t though; he’s off fishing his way toward Washington or something. And Sunny. Well, she’s not out much this summer. Came out a lot last year and fished from her wheelchair, but even the Queen of the Halibuts has to give it up at some point, and this may be the summer—her 82nd—marked as Sunny’s retirement. 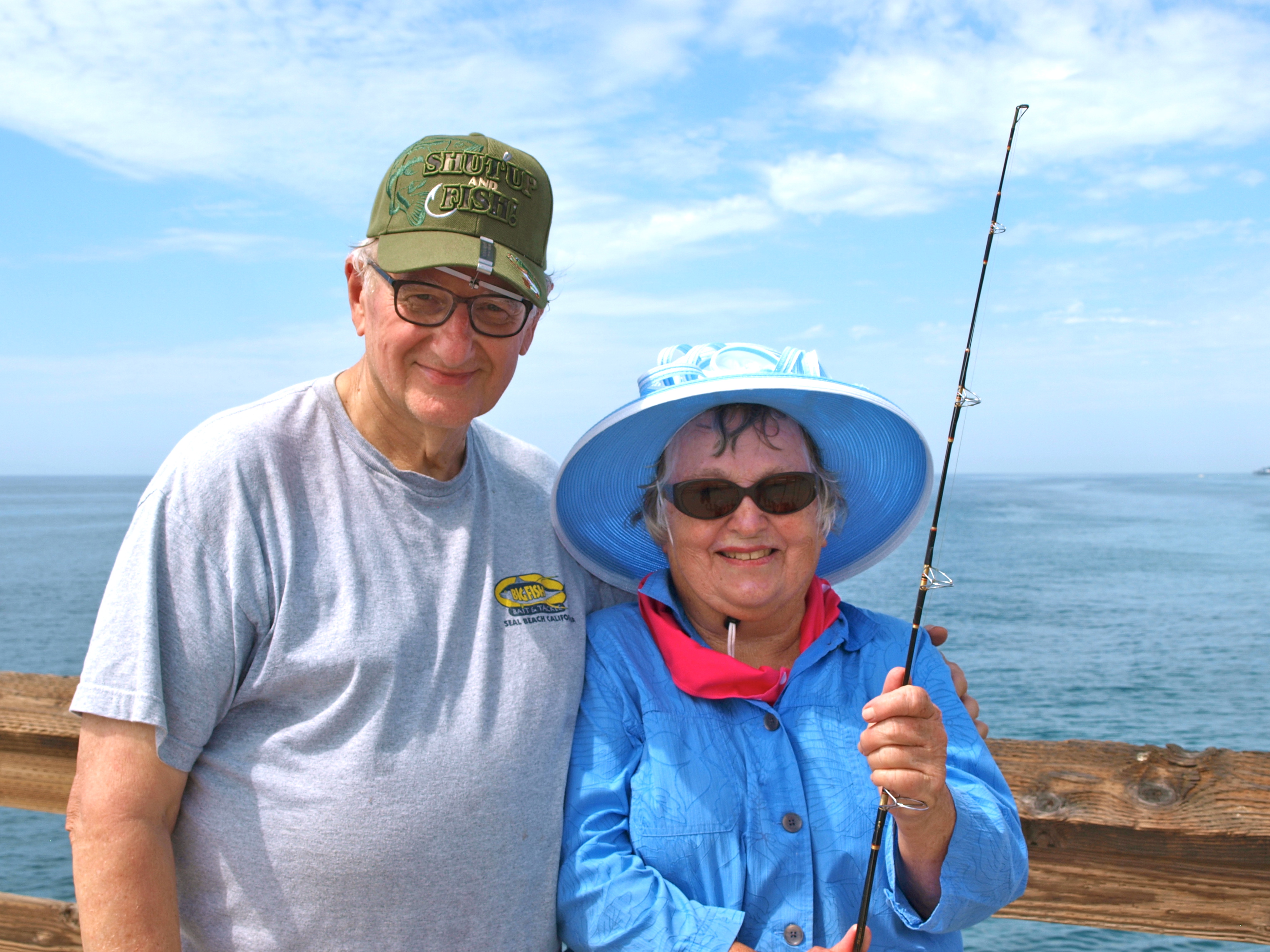 If it is Tuesday or Thursday, and if the Balboa Pier is standing, this bunch will be on it. Usually gathered near the second “T” with carts and coolers and buckets and memories that go way back, to the days, even, before sardines got fished out; back to when barges were anchored three miles out and a water taxi would take you to them for two bits and you could catch barracuda so big they called them logs. Oh, yeah.

This summer there are about five or six regulars: Snooky, Noble, Warren, Milton, Cass. They all have last names. But not out here. Snooky’s thick photo book shows the whole gang that has grown over the years to about 20, sometimes—if the scene of past Christmas parties is accurate. And, being that it’s Snooky’s book, you can bet it is.

She’s got another book, without photos but with as many memories. It’s the record book she keeps— the one that cost $12.95 but is worth it because it has tide information for each day of the year. Even shows what time of day is best for fishing, although as Warren says: “I’ve never seen a halibut wearing a wristwatch.”

Every summer, Snooky records each halibut caught by her pier peers, and at the end of the season, the person who has caught the most keepers gets…nothing. Midway into the summer Warren and Snooky have four apiece; Cass, two, Noble, three. Milton mostly comes to visit.

Most are retired: from real estate, insurance, nursery management. They get here about 10 A.M., break for their lunch precisely (well, as precisely as retired fishermen) at noon, stay sometimes till late afternoon. This is not a hobby for any of them. Hobby? No. Something else. Something more life giving. Or so it seems.

“The camaraderie,” Snooky says she comes for. Which is something, considering how much she likes fishing and how good she is at it. Can’t remember a time when she didn’t fish. Goes to Vegas for international fishing conventions. Said Milton: “I come down to see the gang as much as anything.” Among the gang there are about 300 years of fishing experience, gathered on piers from Belmont Shore to here at Balboa, where they are a well-known sight. After all these years, a pool of anchovies can still excite them. Like last week, when the waters near the pier were darkened with thousands of the smelly baitfish.

Milton and Noble and Warren and Snooky left their main rigs propped on the pier railing and gathered their bait-catching lines, aiming leaded monofilament laced with tiny hooks into the school and yanking up cigar-shaped silver that shot sharp reflections at the midday sun.

See, game fish like anchovies best, it seems. Better than smelt, anyway. Maybe, Snooky figures, because anchovies have a softer scale. So, when the anchovies come through, the excitement of getting bait is nearly as good as the thrill of a keeper catch. Nearly.

You need a lot of bait out here. Not that it’s anything like it was 50 years ago, mind you, but a person who knows what he’s doing can keep busy, This pier fishing is not as passive as you might think. There’s bait to be caught, leaders to be strung, territory to be guarded against the occasional fisherman who wanders out here not knowing that the second “T” is the crowd’s unofficial squat. 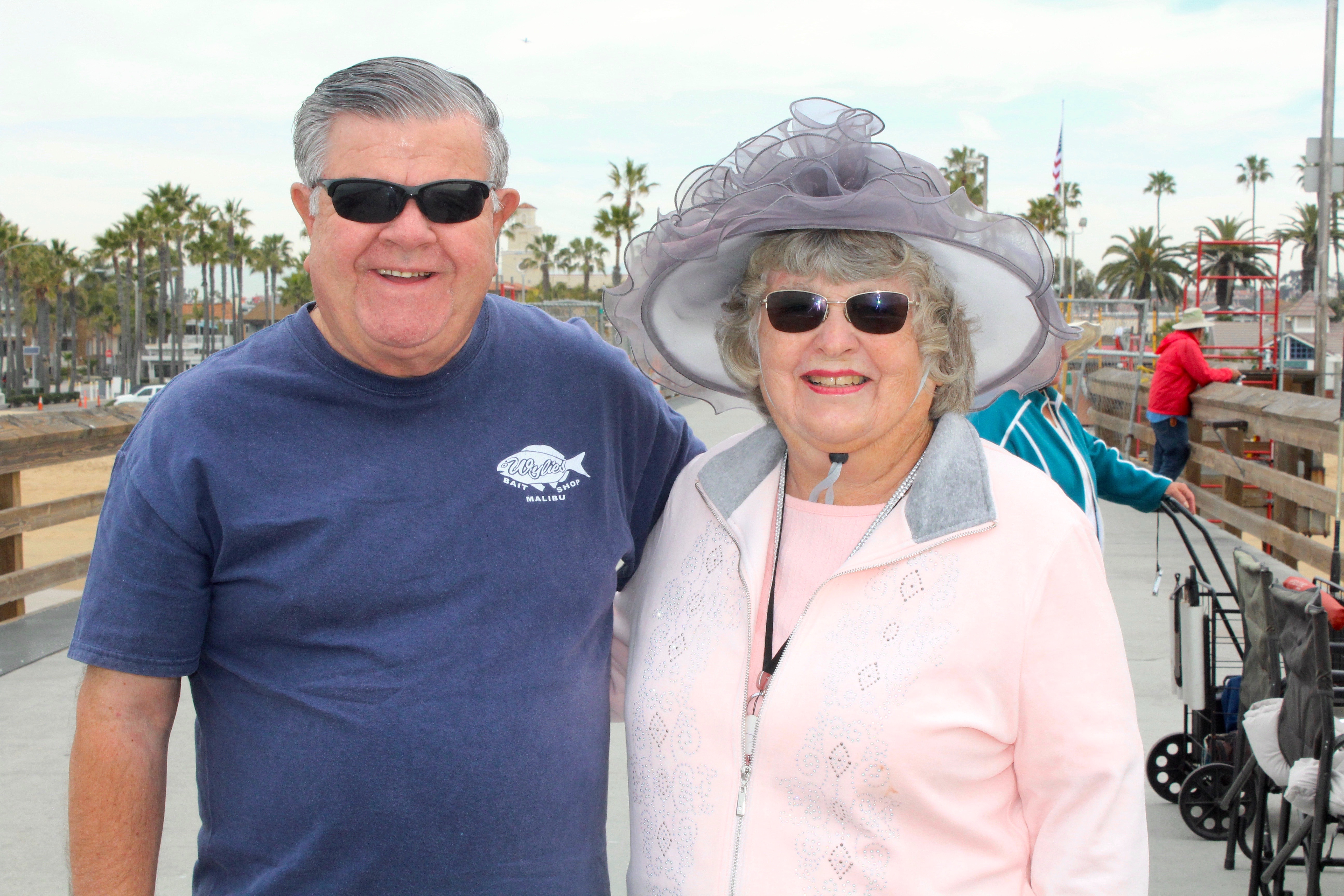 They watch after one another in this group. A few years ago, Snooky says, it got so that if you didn’t keep an eye on your equipment, it would disappear. So now, they all look out for one another and take lunch at the same time so they can watch their gear while they eat.

Things change. Things don’t. Warren’s been fishing these waters 72 years and says the thrill at 81 is the same as when he was 9. The same it’ll be at 90.

He’s seen a lot out here. Still, he dreams. “It’s always been a dream of mine to go to the Florida Keys and fish for those big tuna,” he says. “Man, to get ahold of one of those big things, boy, oh boy…” Man, Boy oh boy.

Warren says he wants to die fishing. Almost did. In 1993, he’d just landed a 27-inch halibut, and Snooky was taking a picture when Warren collapsed. Noble and Snooky took him to the hospital. Heart attack. He was back in two weeks, more convinced of how he wants to go out. “I want to die with a 100-pound fish at the end of the line,” Warren says. “For a fisherman, that’s the way to go out…But I’d be happy to get a 10-pound bonito out here.”

Snookie says most of the group has been together for over thirty years, although some members have known each other for 55 years. Sunny, Snookie’s mother, was the matriarch of the group (until she died in 2001) and fished on both the Balboa and Newport piers before Snookie was born, a time when you “had to have a license just for catching yellowfin croaker.” Snookie’s daughter also grew up on the piers. “When she was in a stroller on Newport Pier, Grandma Sunny would make her play with live anchovies so she wouldn’t be afraid of them later,” said Snookie. Although all had fished the local piers, they more closely banded together back in the ’80s when thievery was at its height on the piers. Today, as seen in the article, the group is sort of a nurturing, extended family whose togetherness exemplifies what I sometimes affectionately call the Loyal Fraternity of Pier Rats. Their group should serve as a good example for other piers.

By the way, my first day of fishing with the group, in June of ’99, highlighted several points that have been mentioned before but bear repeating. When Snookie arrived around 10 A.M. she brought with her the nets, live bait buckets, and other materials necessary to be a successful halibut angler these days. Soon Snookie had made some bait—lively small smelt—and the group was fishing. Snookie quickly caught a sub-legal halibut, which was returned to the mighty Pacific. A few minutes later a second halibut was caught, and then a third, while I was still fishless and hoping I wouldn’t be embarrassed.

But then my bait, which was patiently swimming in the depression down between some pilings, began to act up, followed by the characteristic strike from a toothy halibut. I hooked the flattie, quickly realized it was a good fish, and asked Snookie to get the net ready. Soon the fish was headed toward a waiting net, it made a final run after spotting the net, and then it was guided into the net. Within a couple of minutes a beautiful, 27-inch keeper halibut was sitting under a wet towel on the pier. 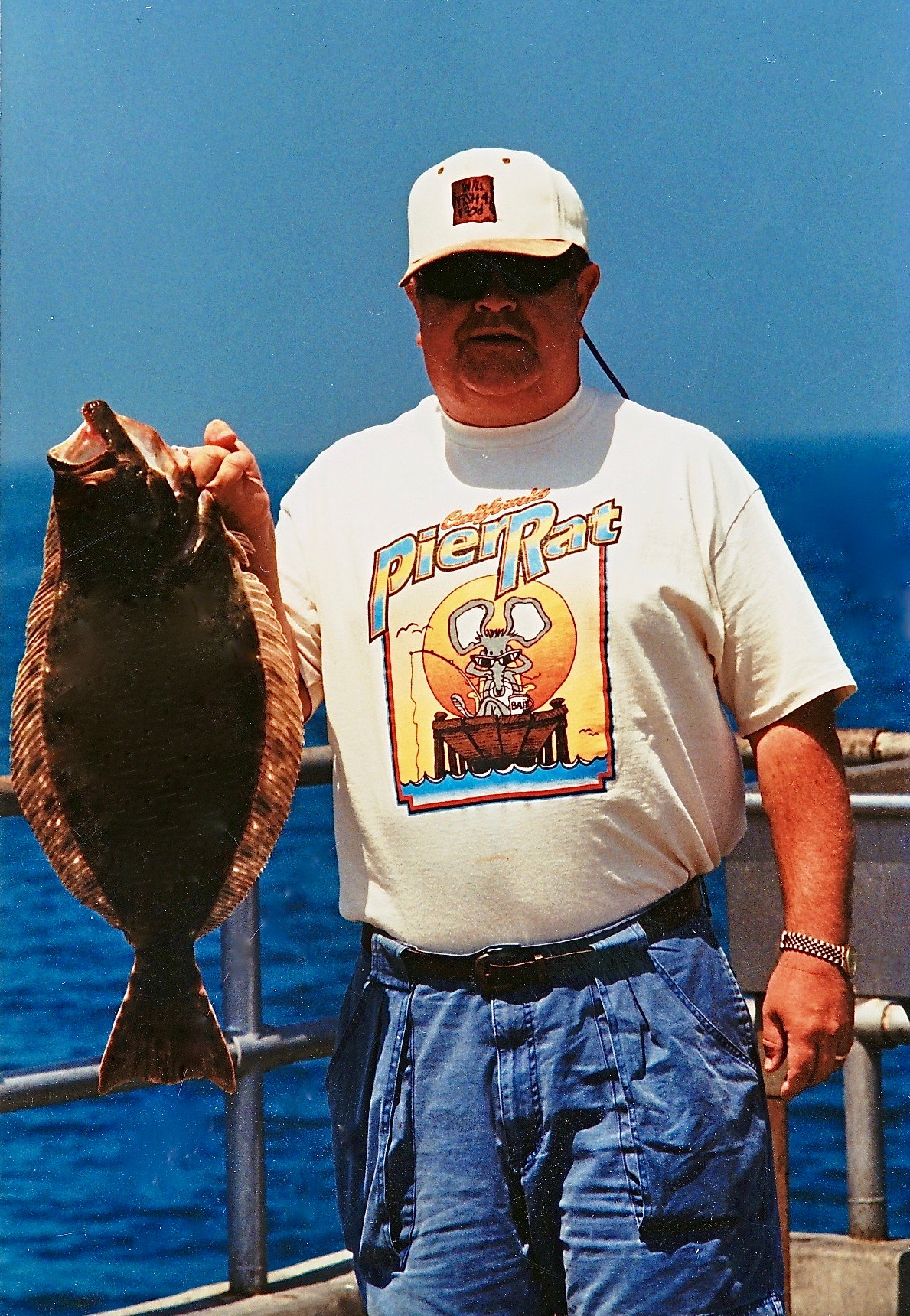 Point one was to always have someone present who knows how to correctly use a net or pier gaff to get the bigger fish, and Snookie was an expert at the task. The second point was the great advantage of using live bait. Within a three-hour time span the group of six people caught 10 or 11 halibut (including two by this lucky angler). I didn’t see another angler using live bait, nor did I see another halibut caught. Point three was the simple fact that looks can be deceiving. Most of the halibut were 12-17 inches long and all were returned to the water with the exception of my fish described above.