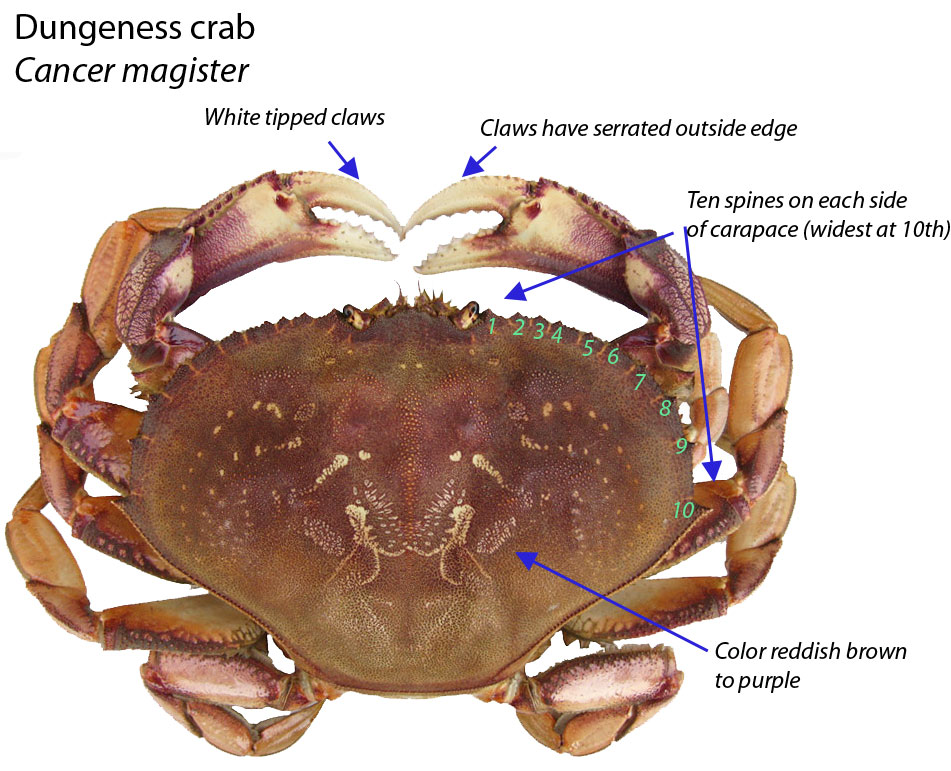 Photo ID courtesy of the Oregon Department of Fish and Wildlife

Species: Cancer magister (Dana, 1852) Some scientists, based on the shapes of the teeth of the carapace, have called for a new genus name Metacarcinus which would mean a scientific name of Matacarcinus magister. Until clarified, this is the traditional classification.

Identification: Dungeness are trapezium-shaped crabs with a wide, long, hard carapace (shell), and five pairs of legs. Unlike most of their cousins, Dungeness have white-tipped pincers on the claws (chelipeds). The top edges of the claws, and the upper pincers have sawtooth-like serrations that contain more than a dozen teeth along each edge. The crabs use these claws for defense and to rip apart their food. They use their smaller appendages  to pass the food particles into their mouth. Once inside the crab’s stomach, food is further digested by a collection of tooth-like structures called the “gastric mill.” The last three joints of the last pair of walking legs have a comb-like fringe of hair on the lower edge, and the joint previous to these has hair on both top and bottom edges, but with a much greater amount on the top edge. In both male and female, the tip of the last segment of the tail flap is rounded (unlike other crabs in this group). The color of the Dungeness is generally light reddish brown to gray on the back (often with light streaks and spots), with a purplish wash anteriorly; the underside is whitish to light orange, the inner and upper sides of the anterior legs with crimson or purple. 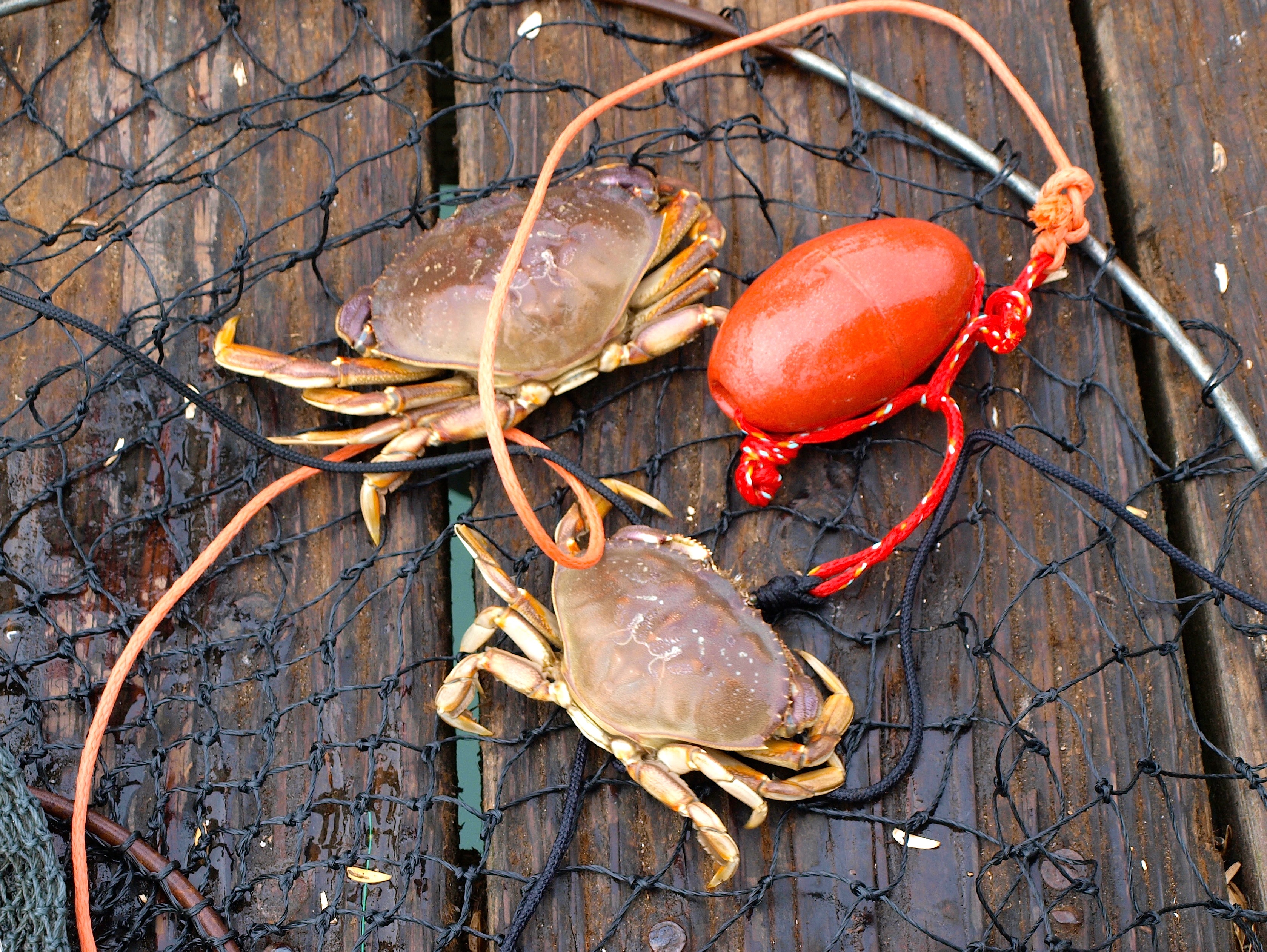 Small Dungeness crabs at the B Street Pier in Crescent City

Range: Bahia Magdelena, Baja California, to Unalaska, Alaska in the Aleutian Islands (some sources say to the Pribilof Islands in Alaska). In California, adults are rarely seen south of Point Conception; most common from Monterey Bay north. As a general rule, the farther north you go the better your chance for netting crabs. 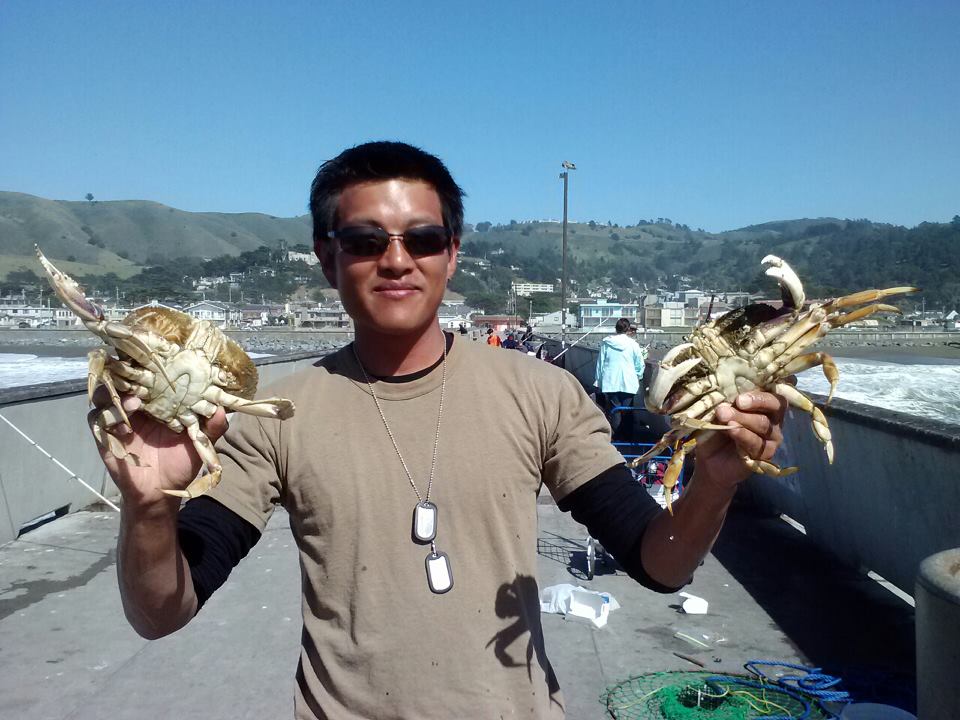 Dungeness crabs at the Pacifica Pier taken by Matt Shockley

Habitat: Recorded from intertidal depths down to 750 feet but are most common on sandy and mud bottoms from 60 to 300 feet deep. Inhabits eelgrass beds in bays. Estuaries are important to their life cycle and they inhabit all such areas between Morro Bay and Puget Sound, Washington. Dungeness are scavengers that will almost anything; their preferences are clams, other crustaceans and small fish. 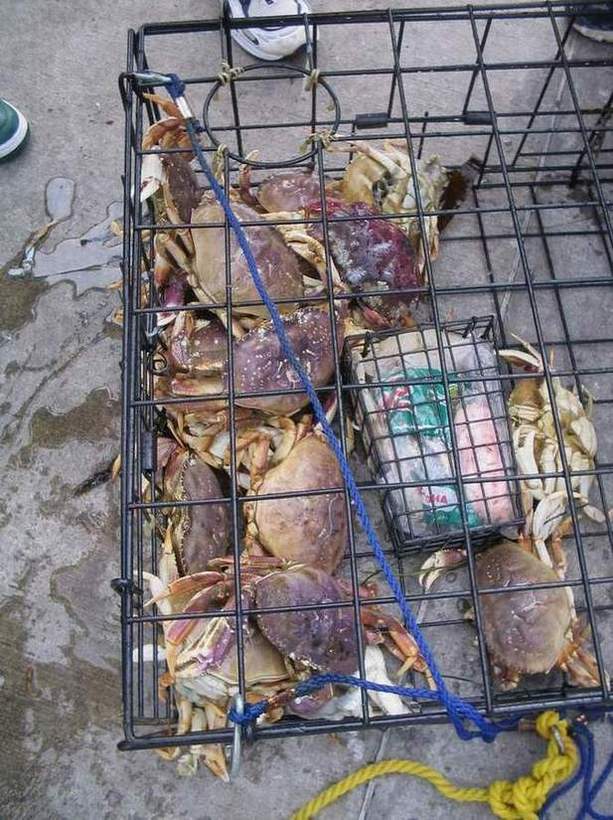 Piers: Most commonly found on piers that sit over a sand or mud bottom. Most pier-caught Dungeness are taken on piers from Pacifica north. Many rivers along the north coast see an influx of Dungeness during late winter and early spring months, and harbors and bays are active spawning grounds for Dungeness. In these far northern waters Dungeness are common and at times a nuisance. On one of my trips to Eureka nearly every cast saw a crab latch on to the bait. I finally had to switch to artificial lures to keep the crabs off my line. Of course if I had been crabbing (which I wasn’t) I would have had no complaints. Best piers seem to be the Pacifica Pier, Lawson’s Landing Pier (Tomales Bay), almost any pier in Humboldt Bay, and either of the two piers at Crescent City. Although a common catch at piers inside San Francisco Bay, and even into San Pablo Bay, it is illegal to keep Dungeness in these bays. 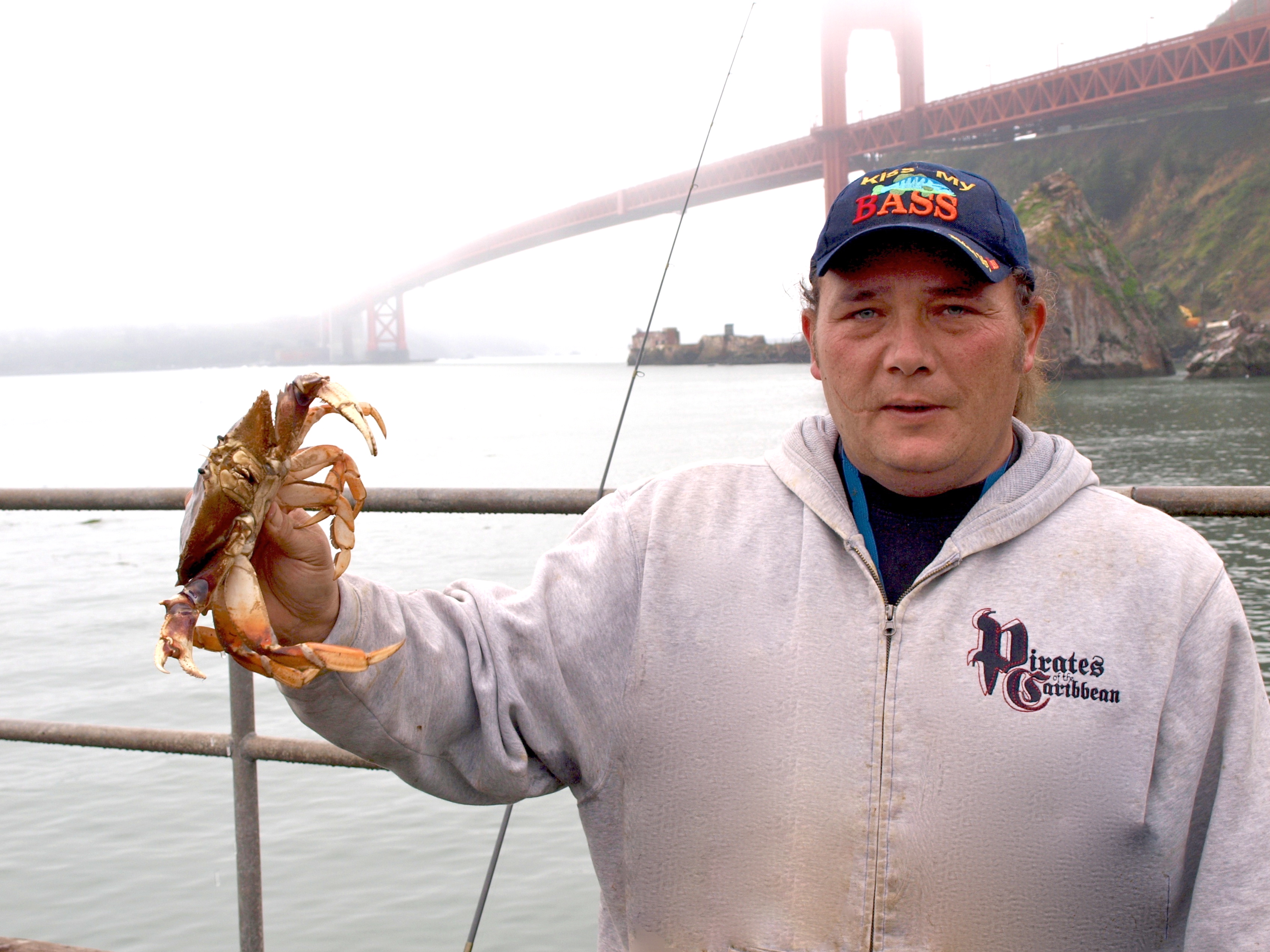 A Dungeness taken by illcatchanything (Brian Linebarger) at the Fort Baker Pier that sits inside San Francisco Bay. Given the pier’s location, the Dungeness was illegal and was returned to the water.

Shoreline: Almost all sandy-shore beaches north of Half Moon Bay will see Dungeness, as will areas inside of bays from Tomales Bay north.

Boats: An important goal for boaters from Half Moon Bay north. As regulations have changed and made it more difficult to keep some species, i.e., rockfish, many Sportfishing boats in central and northern California have begun to run seasonal combination fish and crab trips.

Bait and Tackle: Traditionally taken with hoop nets but more and more people use crab snares each year. 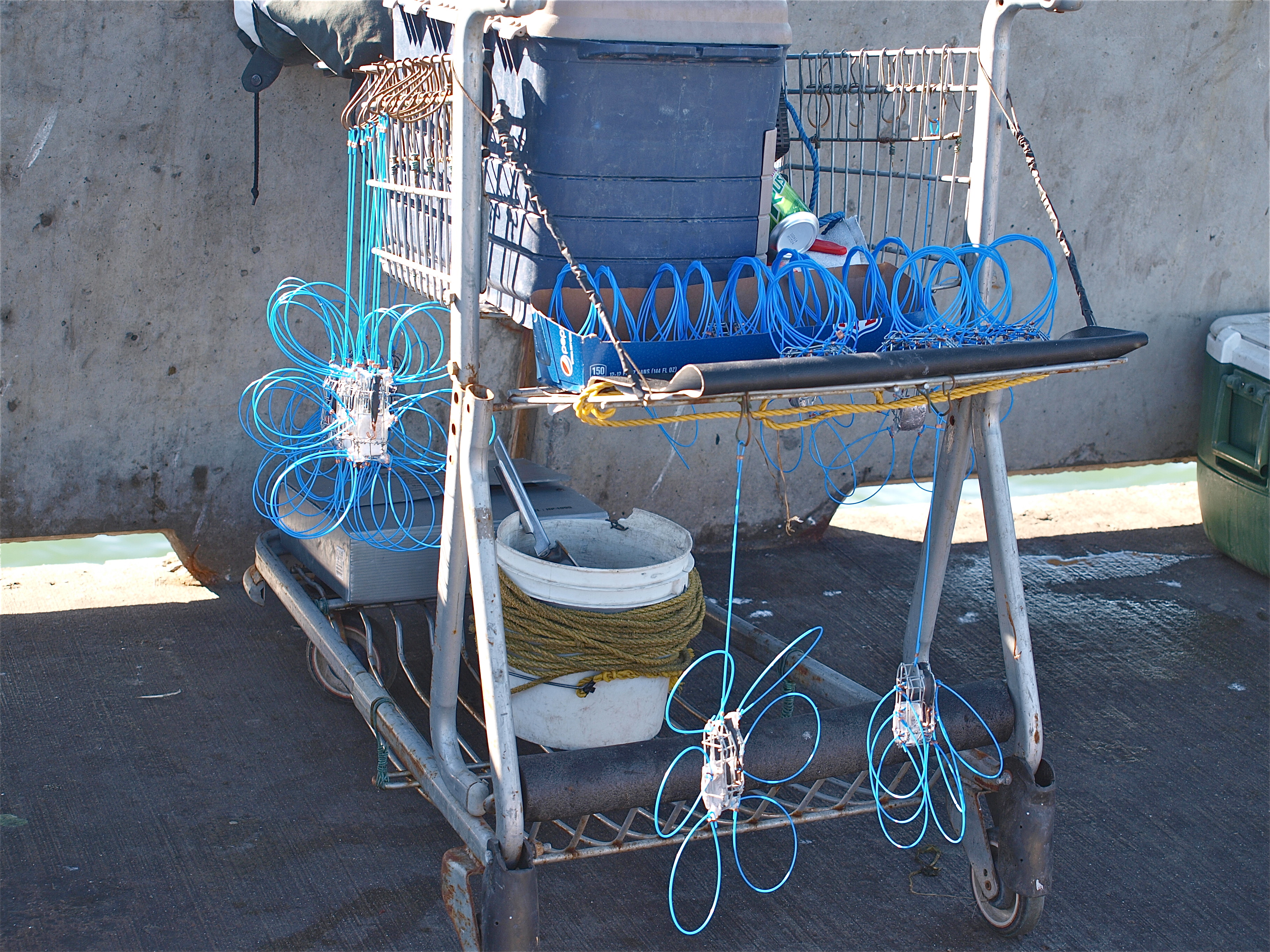 Crab snares at the Pacifica Pier 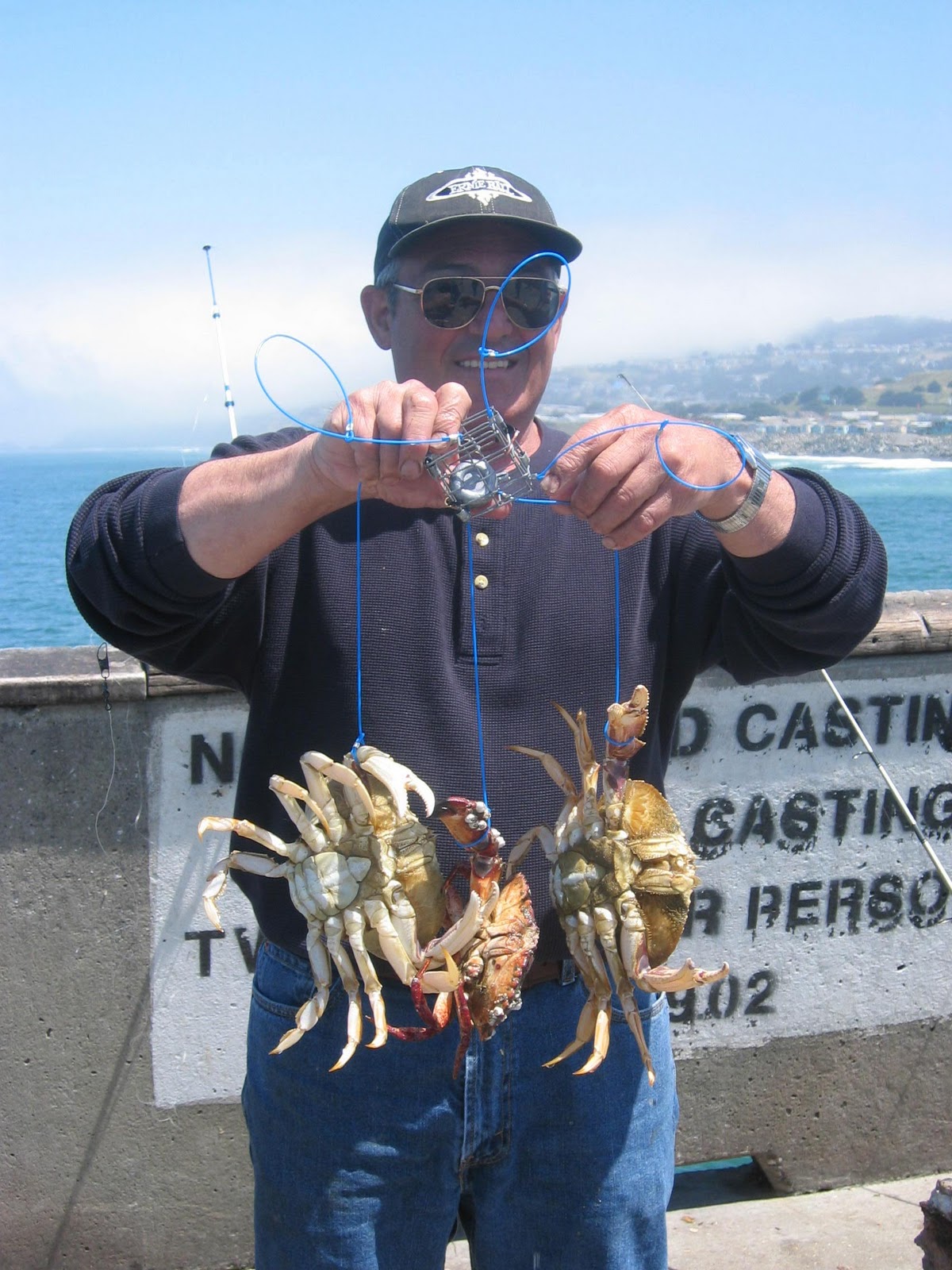 A mix of Dungeness and rock crabs 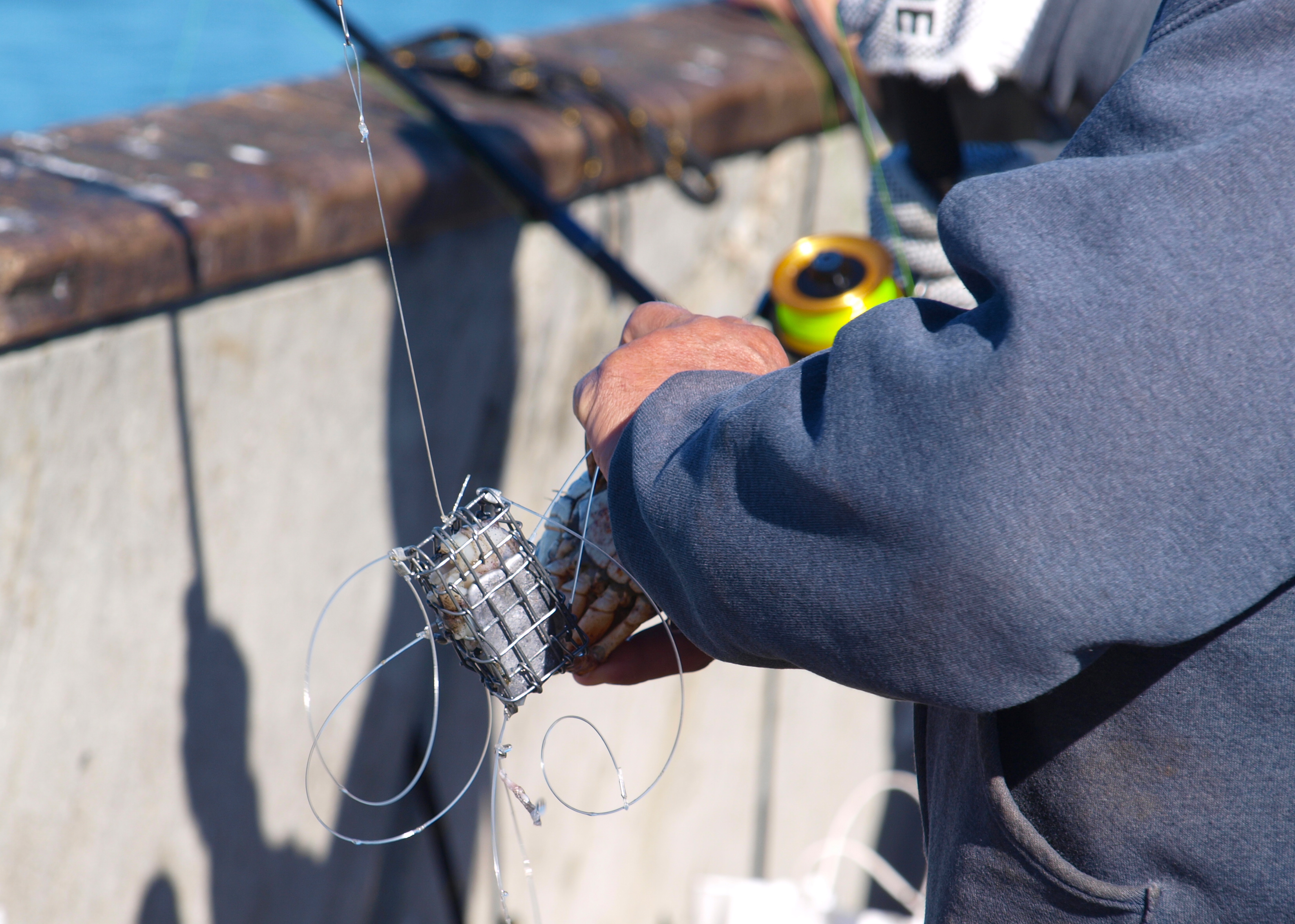 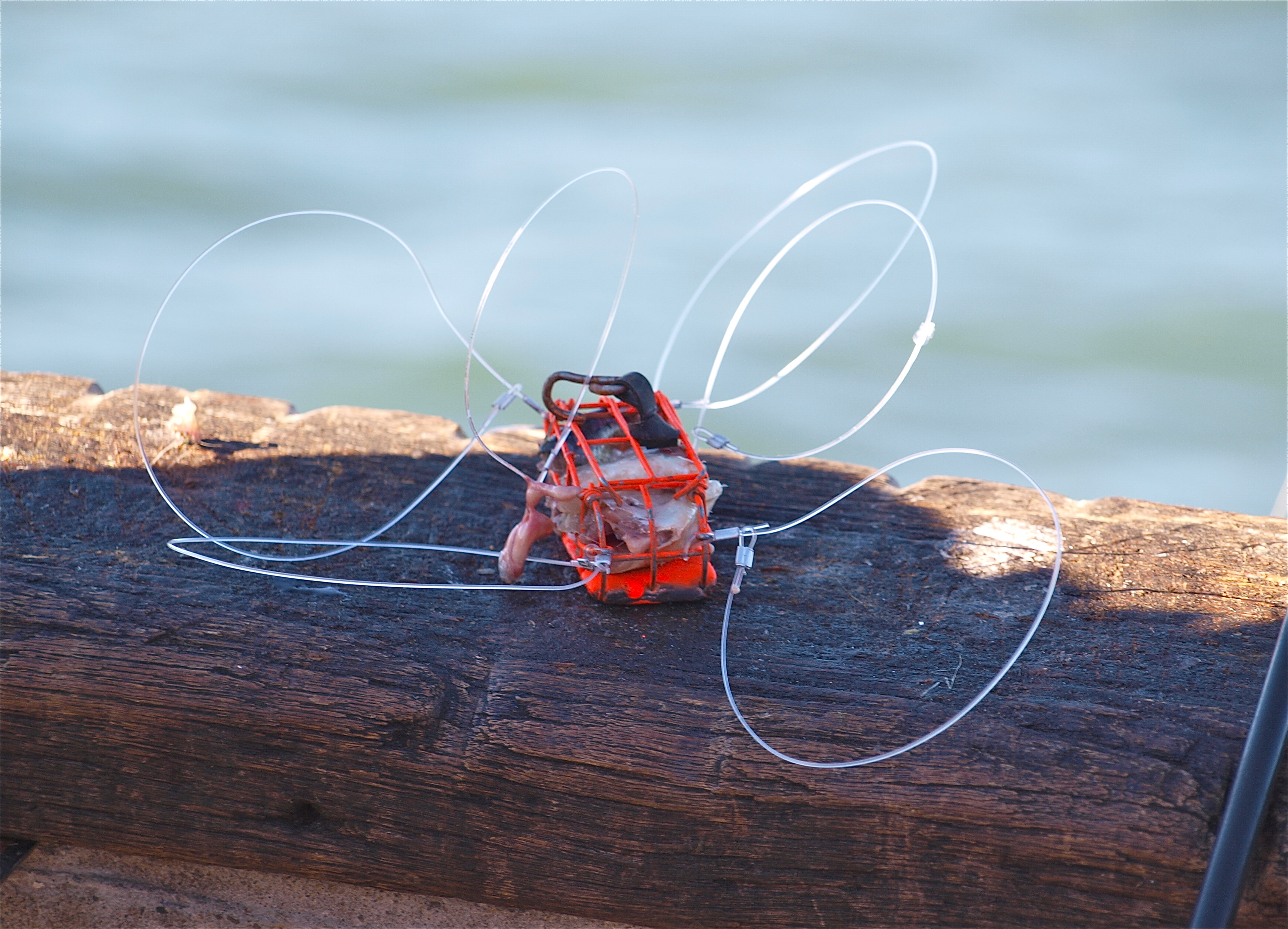 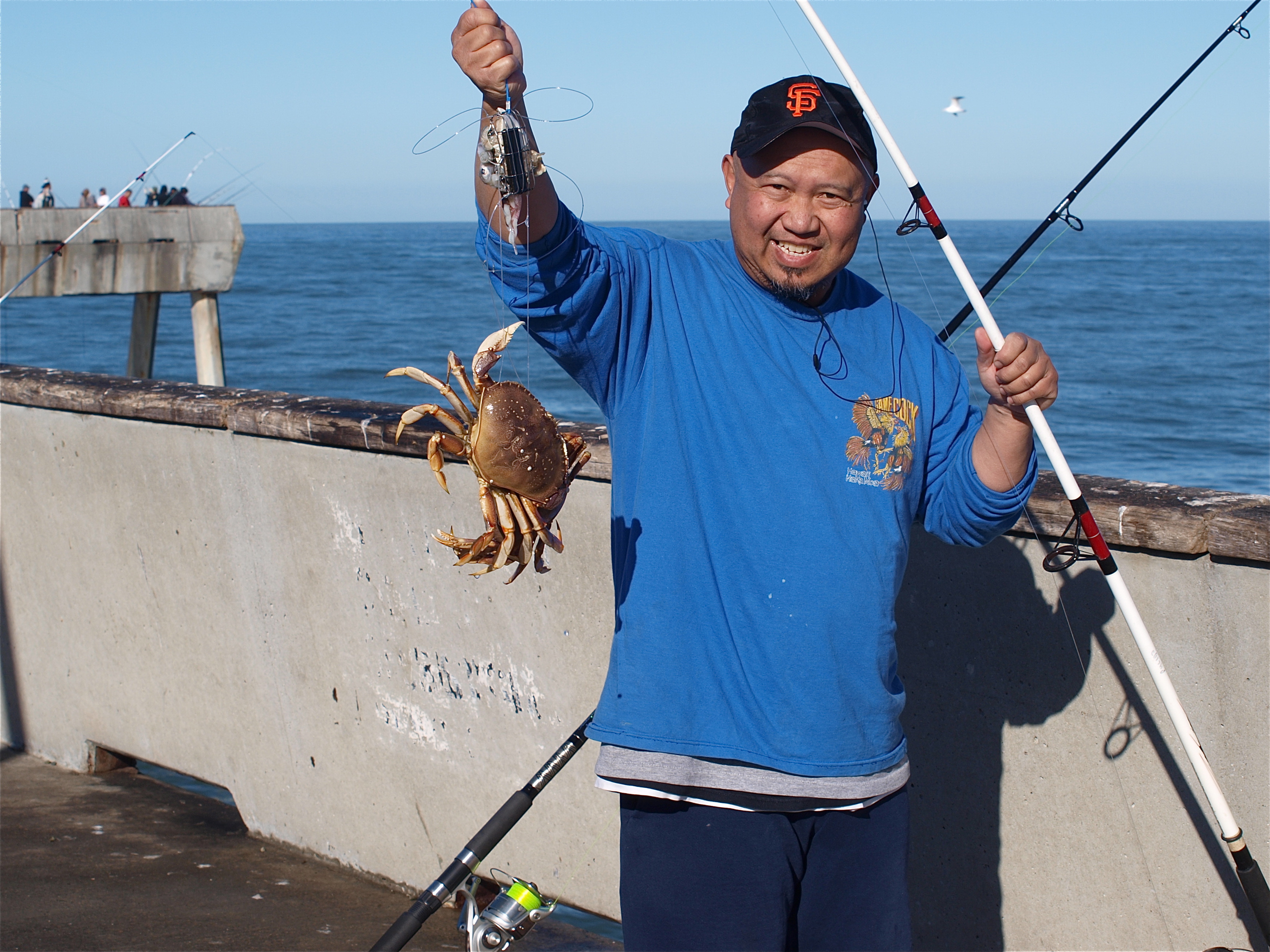 A Dungeness at Pacifica 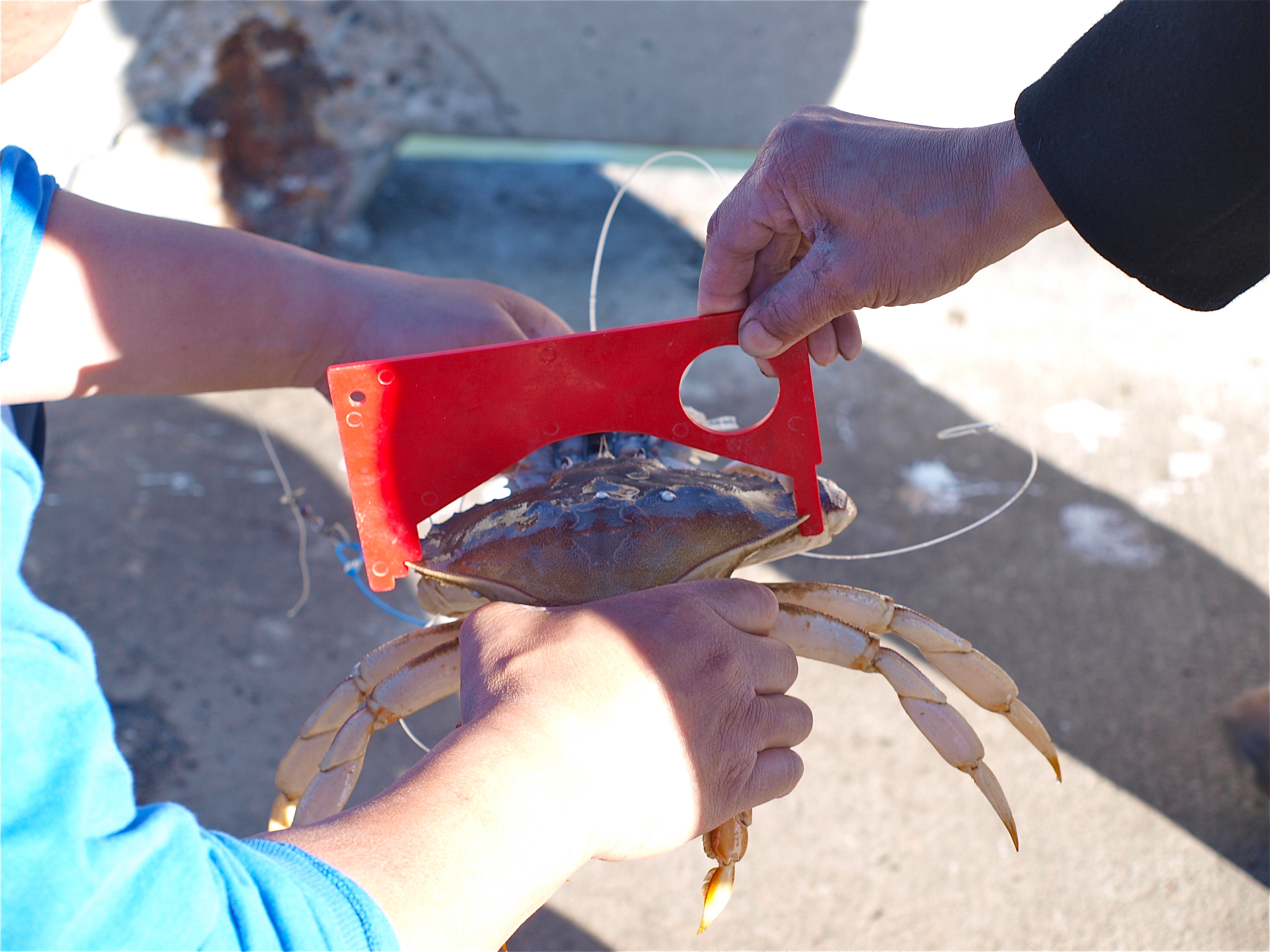 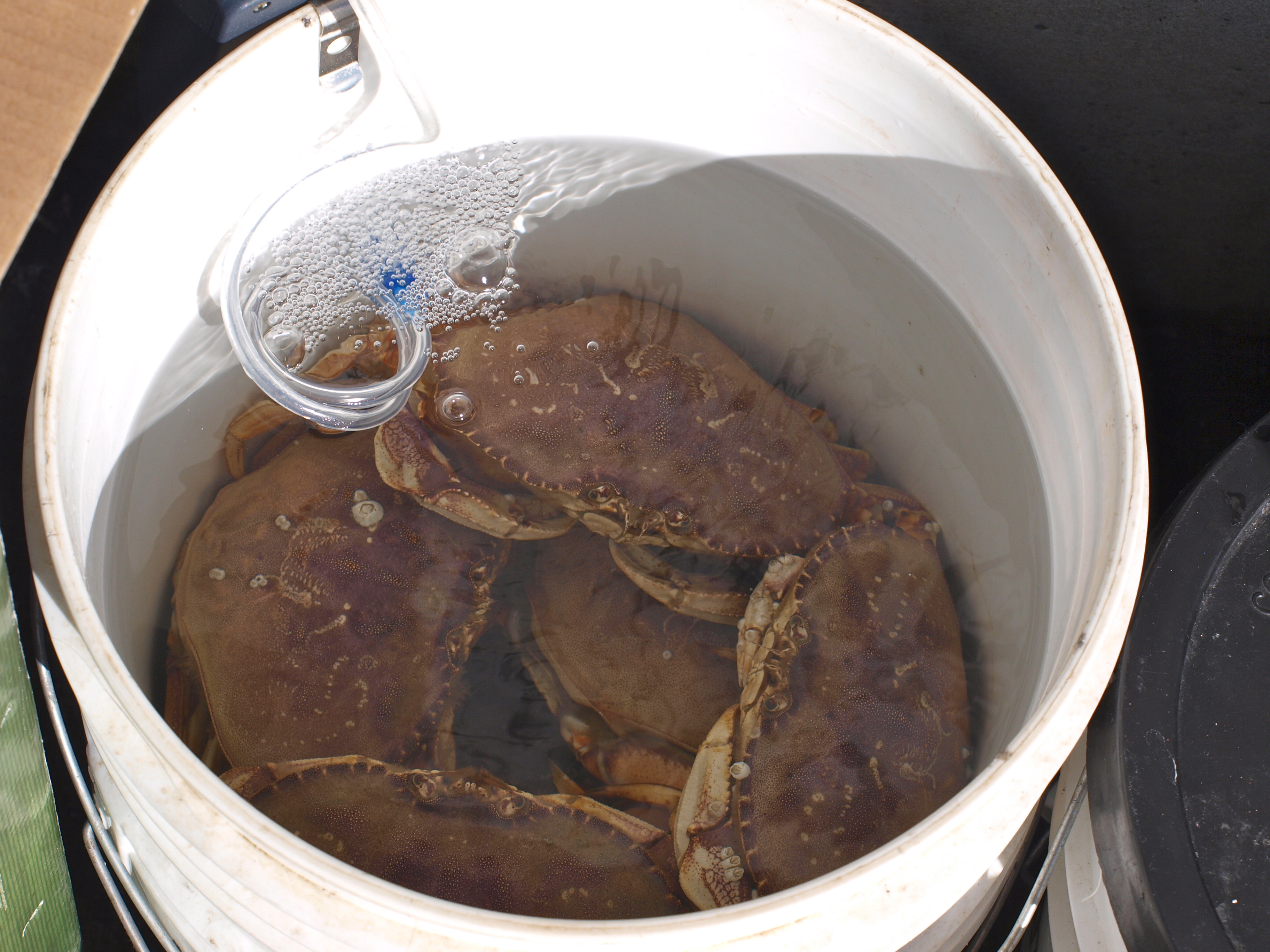 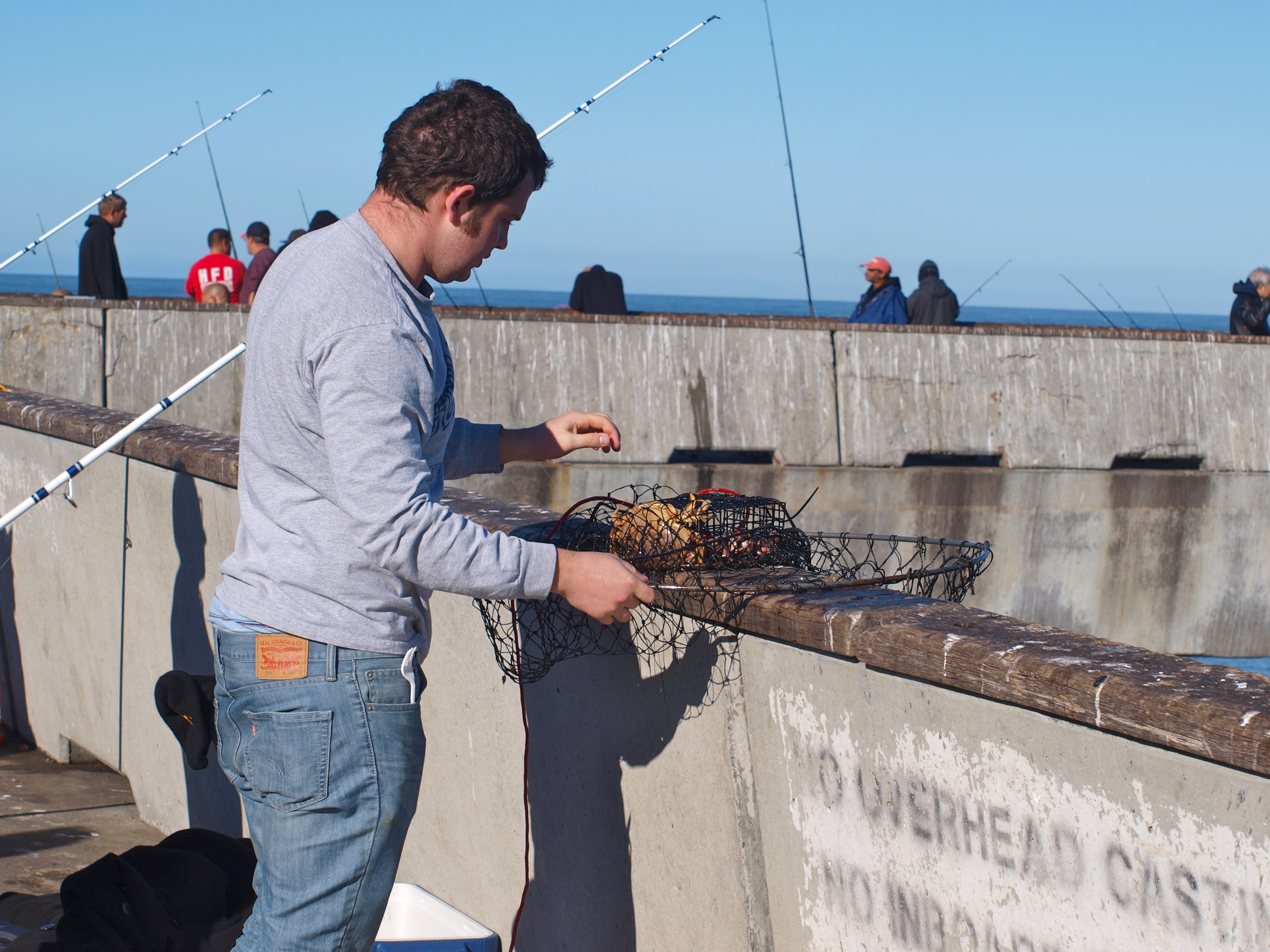 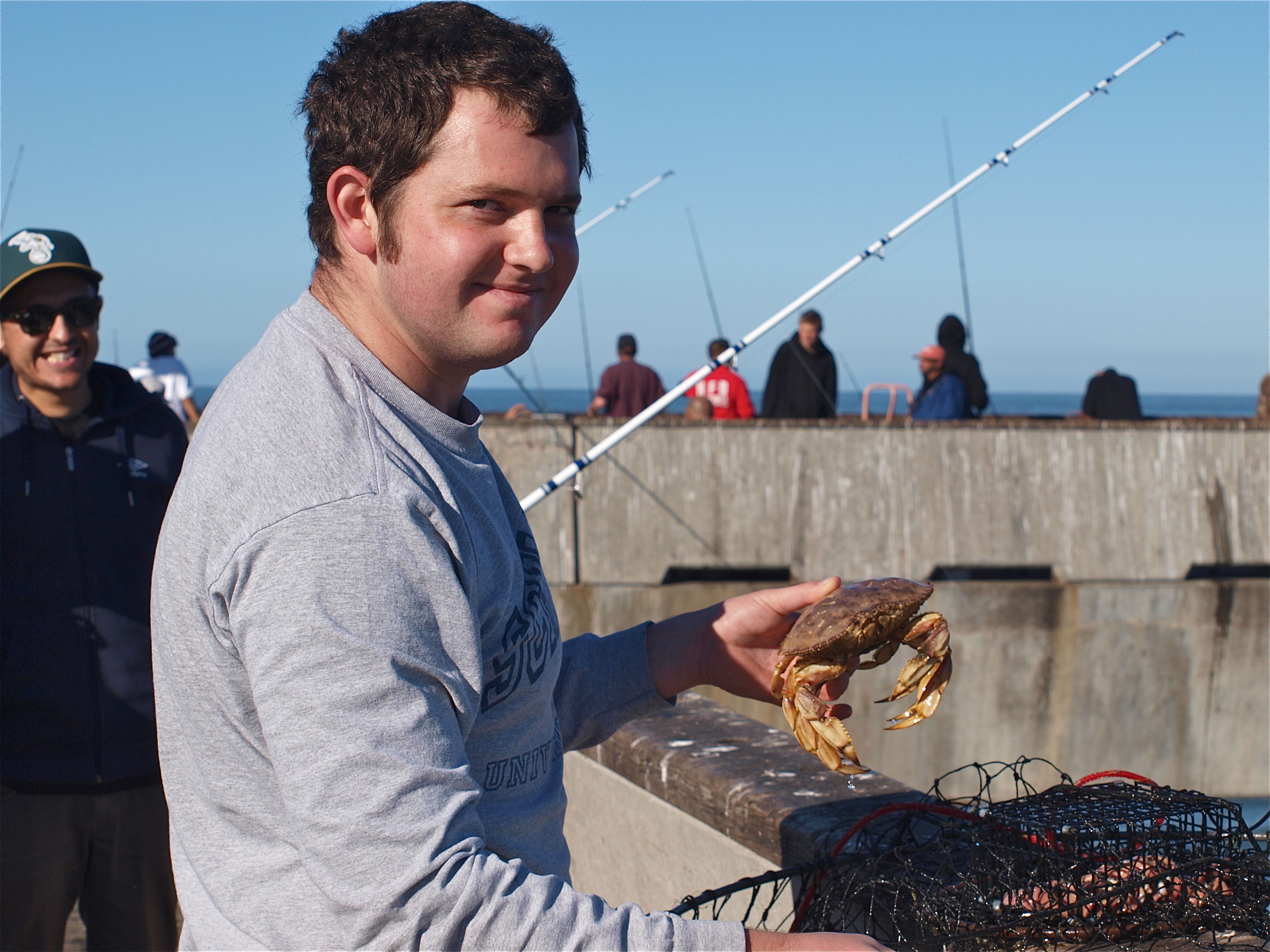 Food Value: About one-quarter of the weight of a Dungeness is meat with the bigger the crab the larger the percentage of meat. The flesh has what is considered to be a delicate flavor that is slightly sweet. Live crabs are cooked by dropping them into boiling salt water, waiting for the boil to return, and then cooking for another 15 minutes. The crabs are then placed into cold water and cleaned. Two common tools for removing crabmeat from the shell are a crab cracker and a shrimp fork. Sometimes a cleaver, a mallet or small hammer is used for cracking.

See the following for additional information on cooking crabs: https://www.pierfishing.com/msgboard/index.php?threads/recipes-for-crabs-%E2%80%94-dungeness-red-crabs-rock-crabs-and-spider-crabs.275/ 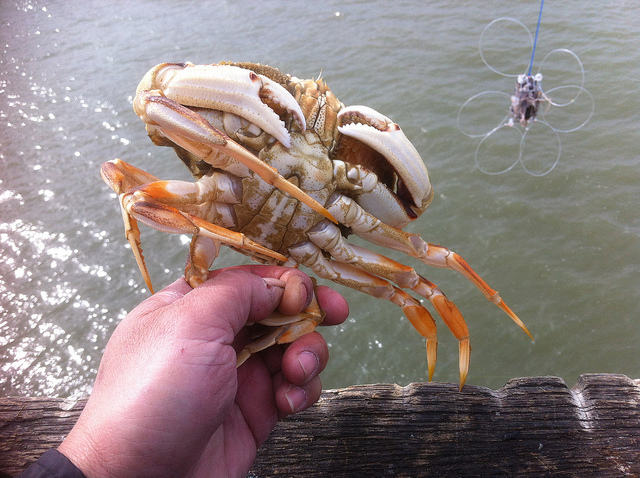 Dungeness taken at the Pacifica Pier

Comments: Generally considered the most desirable of California crabs. It is also known as the market crab and is familiar to anyone who has visited San Francisco’s Fisherman’s Wharf. The crab reaches a good size, yields more meat per crab than most other species, and the meat is firm and delicious.