Species: Myliobatis californica (Gill, 1865); from the Greek words myl (a tooth or molar), io (an arrow or poison), batis (a skate or ray) and the Latin word Californica (referring to location). Apparently called aetobatus californica at one time in California: CA Fish Bulletin #28.

Identification: Bat rays have a very heavy raised head and a dorsal fin at the base of a long whiplike tail with a stinger just behind it. Their coloring is blackish or blackish brown above and white below. Beware of the stinger.

The stinger on a bat ray can be very painful

Size: Reported to reach nearly six feet across and over 200 pounds. Most bat rays caught from piers are less than fifty pounds but many in excess of a hundred pounds are caught every year.

Although we’ve had several reports over the years of bat rays weighing 200 pounds or more, the official state (and world) record remains a fish that weighed 181 pounds 0 ounces. It was caught at the Huntington Beach Pier on July 24, 1978 by Bradley A. Dew, a senior at Huntington Beach High School. Records indicate it was 23 pounds over the prior record and, according to the Dept. of Fish and Game, the fish had a 5 1/2-foot-wingspan, a 3-inch-long stinger, and the width across the bat ray’s eyes was an even ten inches. 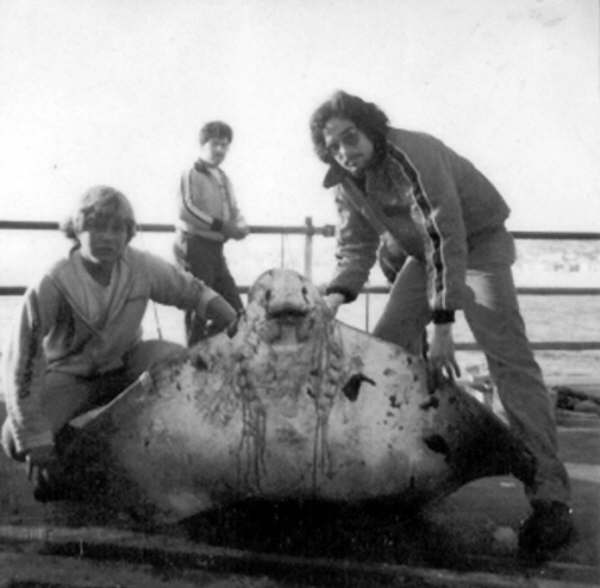 Another fish, this one weighing 203 pounds and measuring 54 ½ inches wide was measured and weighed on a certified scale. It was caught at the Stearns Wharf in Santa Barbara on April 24, 2004. The fish struck a live smelt bait and was landed after a fight lasting one hour and twenty minutes. The fish was hooked and fought by James Elledge, and gaffed by Ron Maxell. With the help of bait shop owner Ray Angel (how appropriate) the fish was carried over to the Santa Barbara Shellfish Company to their certified scales. PFIC representative Boyd Grant was soon on the scene to witness and photograph the huge fish…one of the largest bat rays ever caught on a California pier (and possibly the largest to be weighed on a certified scale). 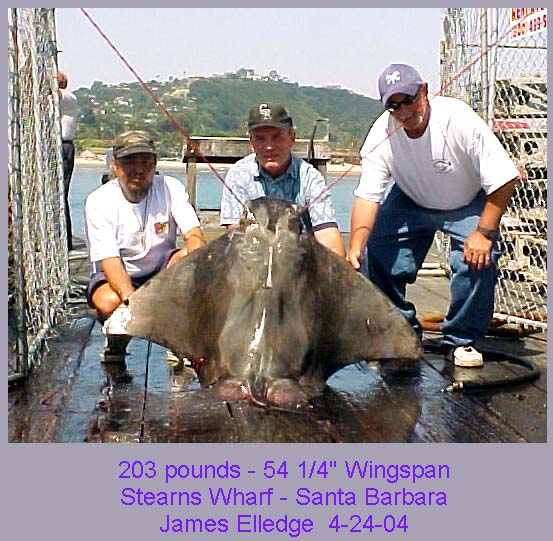 This fish was seen and the information verified by UPSAC member (and head of the Goleta Pier Angler’s Center) Pierhead (Boyd Grant). We never determined why it did not qualify as a record.

According to the California DF&G “female bat rays reach a greater size than males, attaining a maximum disc width of 70.9 inches and weight of 210 pounds. The largest reported male is 40 inches wide and a weight of 37 pounds. Bat rays grow slowly, reach sexual maturity relatively late, have few young, and seem to be fairly long-lived. A 60-inch disc width female was estimated to be 24 years old.” So, all of the big bat rays are moms, grandmas or maybe even great grandmothers. 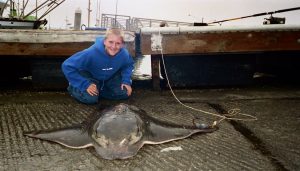 Habitat: Prefers a flat, rocky bottom or sand among rocks although also seems to enjoy hanging around kelp beds. Most commonly caught in sandy or muddy bottom bays and the deeper water areas around piers. Bat rays basically “fly” through the water using their powerful pectoral fins and occasionally they will leap out of the water when hooked. Most common in intertidal waters but recorded to a depth of 577 feet. 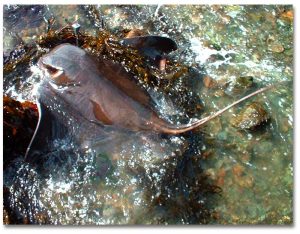 Boats: A frequent catch by boaters and kayakers fishing in almost every California bay.

Bait and Tackle: Bat rays eat a wide variety of foods with oysters, clams, crabs, shrimp, abalone, snails and worms being scarffed down on a regular basis. To be expected, they’ll also take almost any bait. However, frozen or live squid, and live bait such as anchovies, ghost shrimp, mud shrimp and grass shrimp, produce most of the fish. Frozen squid is the least expensive and easiest bait to use and is undoubtedly the number one bait for bat rays.

It’s reported by the way that these strong rays use their pectoral fins to lift their body rapidly up and down to create a suction that sweeps away the sand and gives easy access to their food on the bottom. Because of the potential large size, anglers wishing to fish specifically for bat rays should use heavy tackle and have a net available to bring the fish up onto the pier. NEVER use a pier gaff to lift them up to a pier unless you’re intending to keep them for food.

Food Value: Good although cleaning can be a task. 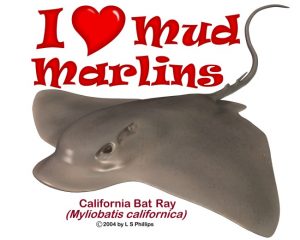 Comments: Although Ray Cannon’s book How To Fish the Pacific Coast holds a cherished spot on my library shelf, and in many ways was a model for Pier Fishing In California, I believe he was wrong in his comments on bat rays. His most egregious was that “These giant Bat Rays should be exterminated whenever possible because of their menace to crabs, lobsters, and all kinds of edible shellfish.” Although it’s true that those species may be included in a bat ray’s diet, I’m not sure why they were singled out over predators. I think it reflects the thinking of the day, in particular the opinion that bat rays were a danger to commercial oyster operations, i.e., those in Tomales Bay. We know today that they are not a danger to those operations; in fact, they may help by keeping crabs under control. I’m not sure why he made a second statement, an assertion that bat rays are “Seldom taken by anglers.” Even back in those days bat rays (usually called sting rays, or in earlier days stingarees) were a common catch, and several shark and ray derbies were conducted along the coast, the most famous probably being that at Moss Landing. For years PFIC/UPSAC had a Mud Marlin Derby at the Berkeley Pier where sometimes more than a hundred anglers would be seeking out the big rays. Today, many anglers concentrate on bat rays. The rays reach a very large size, they put up a strong fight, and are delicious to eat once the fight is over (although more and more people practice catch-and-release with them).

Of interest are the bat ray pools found at several aquariums (including the Monterey Aquarium, The Aquarium Of the Pacific, and the Chula Vista Nature Center). The bat rays can be petted and in fact are rather pet-like; some even seem to like to have their backs stroked. Yes, their stingers have been removed! The venomous spines are cut off about once a month (before they reach a length long enough to hurt anyone). Apparently the bat rays receive no harm from these “manicures,” in fact the spines are made of keratin, the same substance found in human fingernails, and the spines grow back. However, bat rays in the wild still have their spines and can inflict a painful wound, so be very careful if you catch one (and some bat rays have two or even three stingers). For some reason Stearns Wharf in Santa Barbara sees a lot of small, immature bat rays and they’re usually called monkey face rays.

Scientists report that bat rays move into inshore waters to breed during the summer then tend to move offshore in the winter (so guess when they are more likely to be caught from a pier). While inshore, they are sometimes found in large concentrations. At times these bat ray gatherings contain several thousand individuals. The sea bottom holding these creatures must look a little weird and would certainly have a somewhat alien feeling; not sure if it would be more like a black-cloaked Darth Vader convention, a Raider Nation convention, or something even more outlandish (and scary), a political convention. 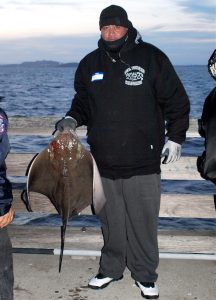