Species: Menticirrhus undulates (Girard, 1854); from the Latin words menticirrhus (chin barbel) and undulatus (waved, referring to the wavy lines on its sides).

Alternate Names: Whiting or California whiting, king croaker, corbie, corvina, bagre and the favorites of many—bean and beanie. In Mexico called berrugata californiana. In the late 1880s and early 1900s corbina were simply called “surf” in most SoCal newspapers although at times they were called surf fish; small corbina were often called nippers.

Identification: California corbina have a long, slender, cylindrical-shaped body with a barbel on the tip of the lower jaw. Dorsal fin appears divided by a deep notch but remains connected by the membrane. Their coloring is a dark metallic blue or sooty gray on the back fading to lighter sides, with wavy diagonal lines, and a whitish belly. 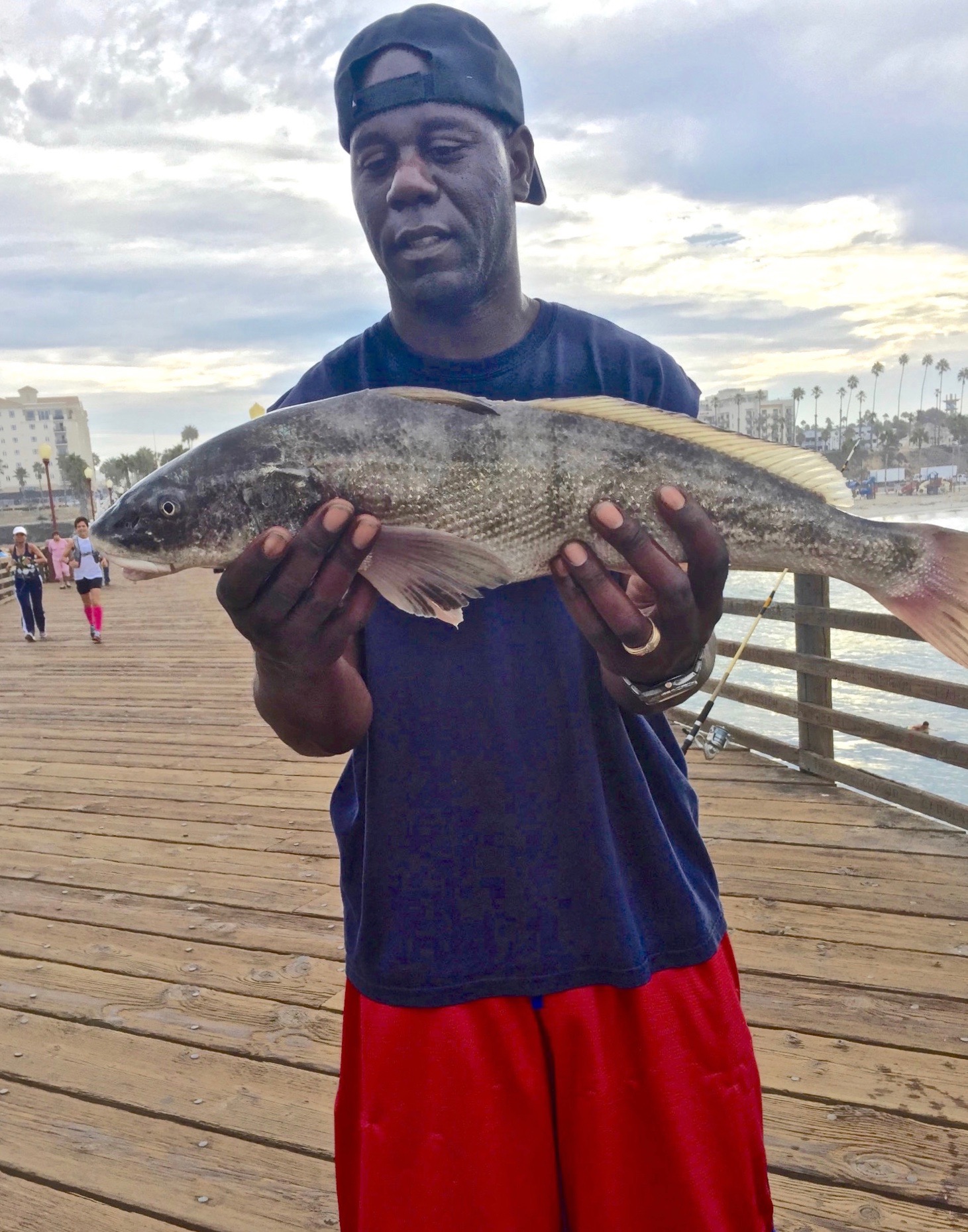 Habitat:  Recorded to a depth of 66 feet but usually found in water 3-18 feet deep. Prefers the shallow-water, oceanfront surf, sometimes swimming in just inches of water while using the chin barbells found on their lower jaw to search for sand crabs. Usually found in groups of two or three or small schools. Most common in the oceanfront surf areas from May through September when they are in a spawning mood (and especially mid-June to mid-August). The majority of corbina migrate into nearby bay and estuary areas during the winter, November through April, months to avoid the heavy winter surf.

Shoreline: One of the main catches by sandy shore anglers in southern California. All sandy beaches between San Diego and San Pedro are considered good corbina beaches; San Onofre is considered one of the best. 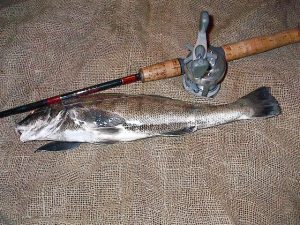 Bait and Tackle: Corbina dine almost exclusively on sand crabs so this is by far the best bait—especially soft-shelled sand crabs. Many, however, are also caught on bloodworms, lugworms, clams, fresh mussels, and even small pieces of shrimp. If you can find them, innkeeper worms are also considered one of the best baits for corbina. Light to medium tackle is best with a high/low leader and size 6 or 4 hooks. The hook should be totally covered by the bait, and the bait should be slowly reeled in, a foot or so at a time. Corbina like to eat in very shallow water (at times the back will nearly be out of the water), so fish as close to shore as possible. This is one fish in which pier fishermen are at a disadvantage. Because of the angle, wind, and wave action, it is sometimes hard to fish a spot without using a fairly heavy sinker. Pier anglers do though have one advantage. They can sometimes spot beds of sand crabs near the pier during low tides, the areas the corbina will invade and seek out food as the tide moves inshore. Corbina are another croaker that often bites far better at night. Well known author Bill Varney, an expert on catching corbina, and one who uses a Carolina-type rigging, recommends (due to the corbina’s excellent eyesight) using black hooks, black swivels, a fluorocarbon leader and a clear bead. 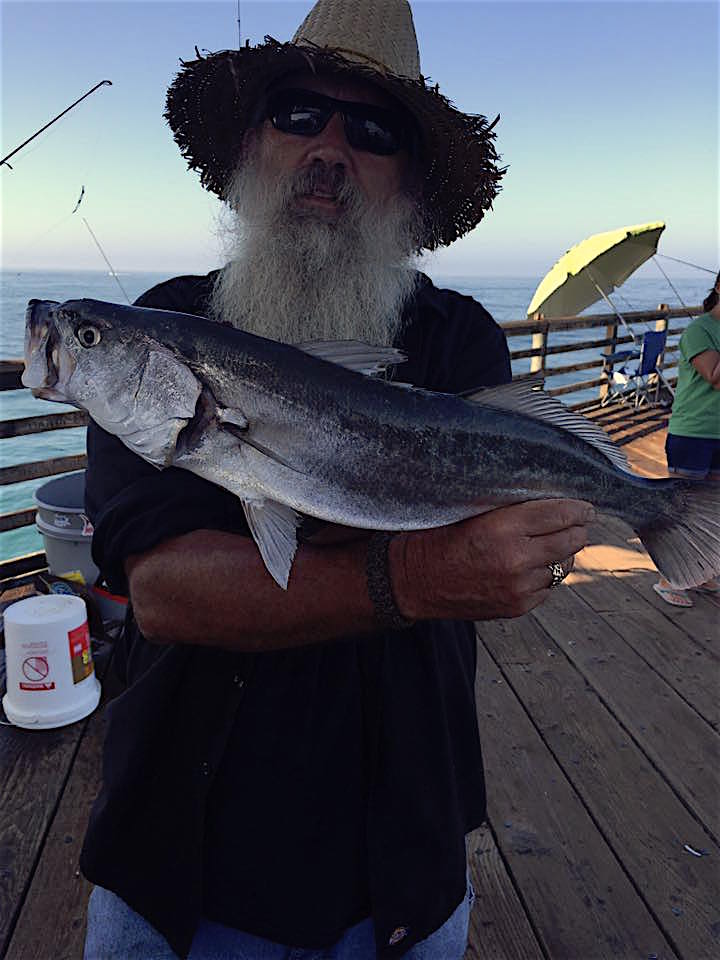 Food Value: A good, mild-flavored fish with a soft texture and low fat content. Suited to almost any type of cooking but best pan-fried or deep-fried. You’ll have to catch them yourself. Corbina have been illegal to take by net since 1909 and illegal to buy or sell since 1915. Unfortunately, due to its bottom eating nature, it may ingest toxic creatures like worms and thus develop low levels of toxicity itself. In some areas, people are warned to restrict their intake of corbina. Such is life in modern day southern California.

Comments: Many fishermen consider corbina the number one surf fish in Southern California because they reach a good size, are good eating, and they present a challenge—they’re one of the hardest fish to catch without the proper know-how. Many times I’ve called the Crystal Pier in San Diego for a report and they’ll comment on how many corbina are being seen in the inshore surf area—and how many are ignoring the bait offerings. 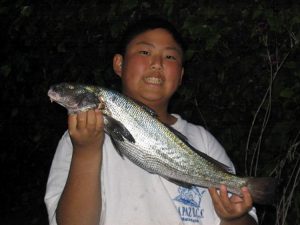 An interesting story from many years ago by George Van Zant concerned John Koerner, the “King” of the corbina fishermen of Alamitos Bay (although he would occasionally venture out to the beaches, Bolsa Chica up to Redondo). He targeted corbina and the only bait he used was innkeeper worms that he pumped himself twice a month during the lowest tides. His pumping spots were secret but all were by “steep drop-offs and he would stand there, waist deep in water with a large shrimp pumper that he had made himself, and pump up enough worms for a two-week period. He would place the worms in buckets of saltwater in his garage, which contained an aireator to keep the water refreshed. He would then head out weekday mornings (avoiding the weekend crowds) and try to be at his fishing spot by 4 a.m. He rarely fished more than a few hours and caught corbina most days. His standard gear was a light saltwater rod and reel rigged with 15-pound line and a Carolina-type rig with a two ounce sinker and a #2 or #4 baitholder hook. He caught a LOT of big corbina and those who knew him (including some fishing writers) claimed he had caught them to 10 pounds in weight. But, he didn’t care for records and had never submitted one of the BIG fish to the state even though some may have exceed the then 6.9 pound record. Today the state record stands at 7 Lb. 1 Oz. but given John’s story, and the story below, it’s not inconceivable that some day we will see a ten-pound or larger fish as a record.

At last the great, great grand-daddy of the Corbina tribe has been gathered to his fathers and a nine days’ sensation among fishermen ended. After long years of piscatorial vicissitudes in which more than once he had formed temporary but entangling alliances with the leaders of briefly lucky bait butchers; after countless sessions of intermittent chase of the succulent sand-crab varied by occasional séances with the secretive clam, this silver-scaled giant last week fell a victim to the wiles of A. White of Redondo in the still waters of the night and under the seductive light of the full moon.

His weight at capture was eleven pounds and two ounces, which is by far in excess of all known records for corbina in this vicinity.

The Sunday preceding Harry Slotterbeck perceived a huge fish of some sort groveling slowly on the bottom; searching for food after the manner of corbina. From its excessive length, which he estimated to be three feet, at least, Slotterbeck fancied he was watching a shark, but a white flash from the side caused him to look closer and hardly believing his eyes, he recognized a corbina of most phenomenal proportions. Calling a friend, he too pronounced it a grand “surf” fish. The pair tried to catch the prize but he was wary and cared nothing bait. They quit in vain.

The moonlight and the quiet night helped Mr. White two days later, and in triumph, he carried away the huge fish after a prolonged, nerve-racking tussle in the breakers. The big fellow put up the tremendous fight that might be expected from a seasoned veteran, strong and well schooled by time in all the arts and wiles that make corbina popular with fishermen. Mr. White had a twenty-minute tussle with his prize and nearly fell off the wharf when he got to look at it. He describes the catch as having a head the size of a man’s and bearing all the evidences of extreme age, though it was strong enough in the water. How old a fish of such extreme size must be left to conjecture.

Corbina of small size and ravenous appetites were plentiful Sunday at all points from Del Rey and Redondo to Huntington Beach. F. Seeberg caught nearly a dozen fine sized ones off the beach in Santa Monica the largest weighing 4 ½ pounds. At Redondo, Harry Slotterbeck caught nearly two dozen “nippers.”