The angling piers of California are unique. At Redondo you find a little shop at the entrance with long rods and tackle to rent, and not far away the bait man, ready to provide clams, small fish, or anything you wish. Long Beach has several piers, and at Venice the pier is virtually a city street built out over the sea, with shops of various kinds and entertainments sufficient to divert the attention of the ghost of Walton. At the long, mile or more pier at Santa Monica a house stands at the sea-end, far out to sea, and the rail is lined with anglers who employ strange tackle. A little shop provides simple cheer to the physical man, and tackle can be rented and bait purchased. Back of the shop hangs a big scoop-net forty feet square, which is occasionally lowered and live bait caught, which is sold to the anglers whose ambition soars above sand-dabs and mackerel to the other realms of yellowtail or big sharks, or a possible ray. 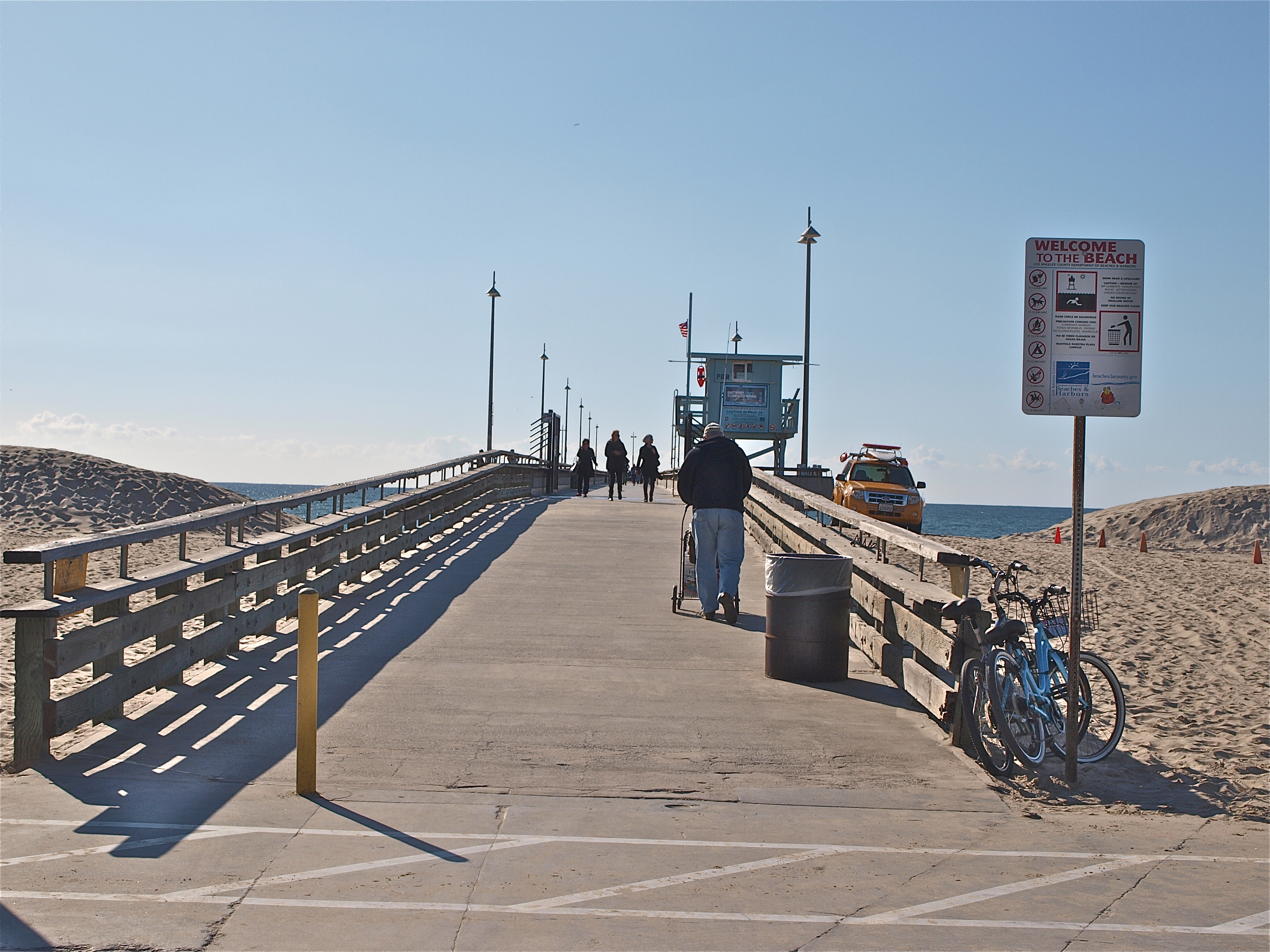 Venice, California, in the old days had much to recommend it to people who liked to be sad. It had fog almost every night and along the shore the moaning of the oil well machinery and the slap of dark water in the canals and the hiss of sand against the windows of your house when the wind came up and sang among the open places and along the empty walks.

Those were the days when the Venice Pier was falling apart and dying in the sea and you could find there the bones of a vast dinosaur, the rollercoaster, being covered by the shifting. 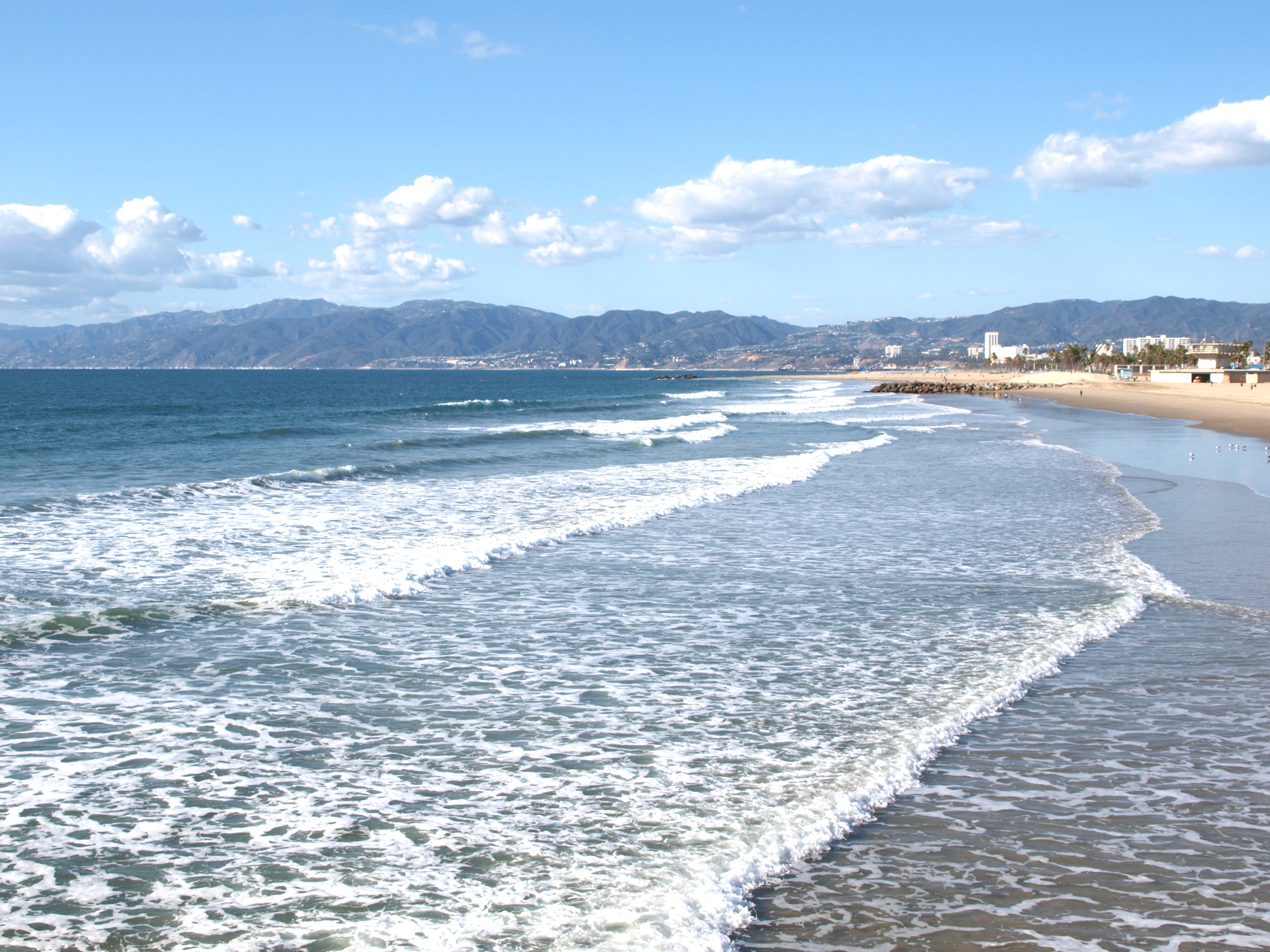 The surf and coast

These two quotes, one from more than a hundred years ago, and one from only a few decades ago, reflect a different pier, the original Venice Amusement Pier of Abbot Kinney. That pier was huge, and part of a social experiment that was intended to make Venice a cultured Renaissance town in America. But Kinney also wanted to make money and the pier he built was, in many ways, as crass as a county fair (but on a much, much larger scale).

But the dinosaur rose, and fell, and the social experiment itself died a messy death. Its death left Venice a town that has always seemed a little different, a home for the beatniks in the fifties, the hippies in the sixties, and various groups since those days. 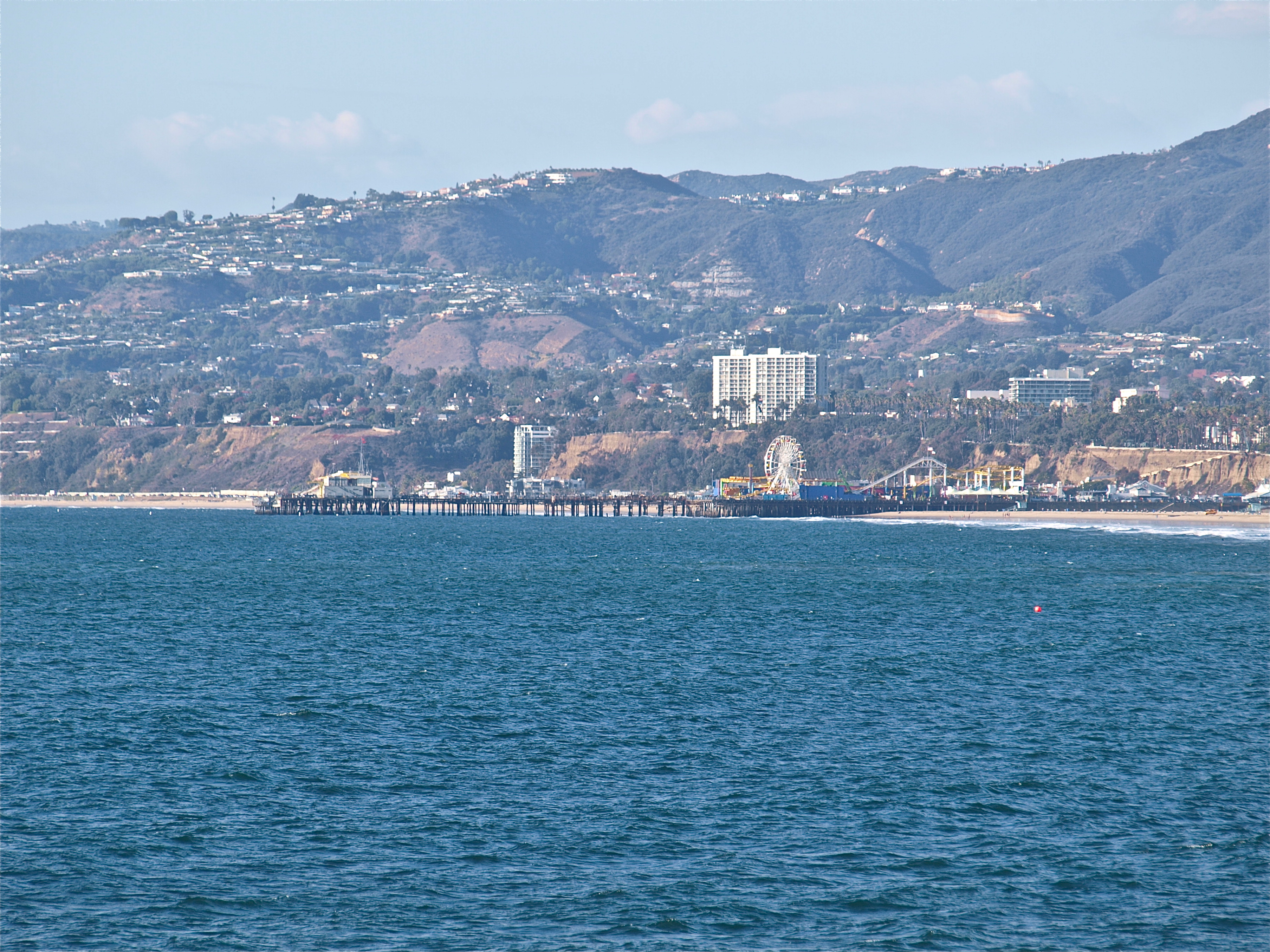 As for the fishing pier, it’s different. The original pier may have allowed anglers to drop a line into the water but it never was designed as a fishing pier. In contrast, today’s pier has one purpose: fishing, and luckily the fishing can be quite good.

Sometimes things seem so simple that you wonder why no one else thought of the same idea. That was my thought when I visited the “new” Venice Fishing Pier in the summer of ‘98. Among the neat little touches that the designers had given the pier were two that every pier should copy. The first was a double railing out at the end of the pier. The bottom railing can be utilized for cutting bait, which means the top railing, the railing usually used by fishermen and other visitors to rest their arms, needn’t become coated with slime and dried blood. A nice touch! 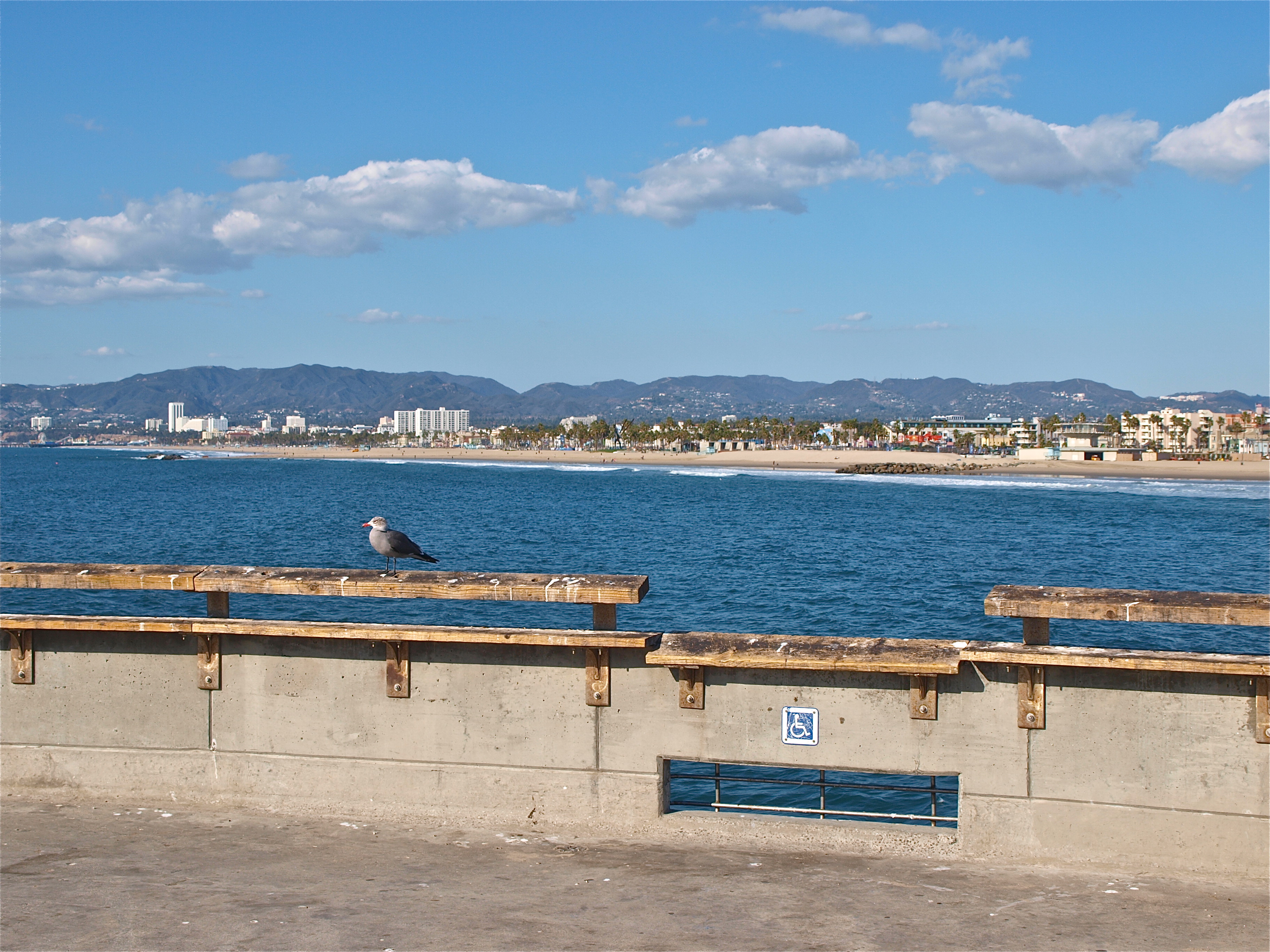 Another great idea was the cutout sections found at various points on the pier, sections that have a lower 28” railing than the other 41” areas. It took me a minute to understand the purpose but then I noticed the handicapped signs and realized that these lower sections were designed for people in wheelchairs. Most piers have railings that range from 38-42 inches, a height difficult to use for people in wheelchairs. The decreased height of these sections, even if only 12 inches or so, helps compensate and make the fishing more accessible to all anglers. Now, how about more piers copying those ideas! 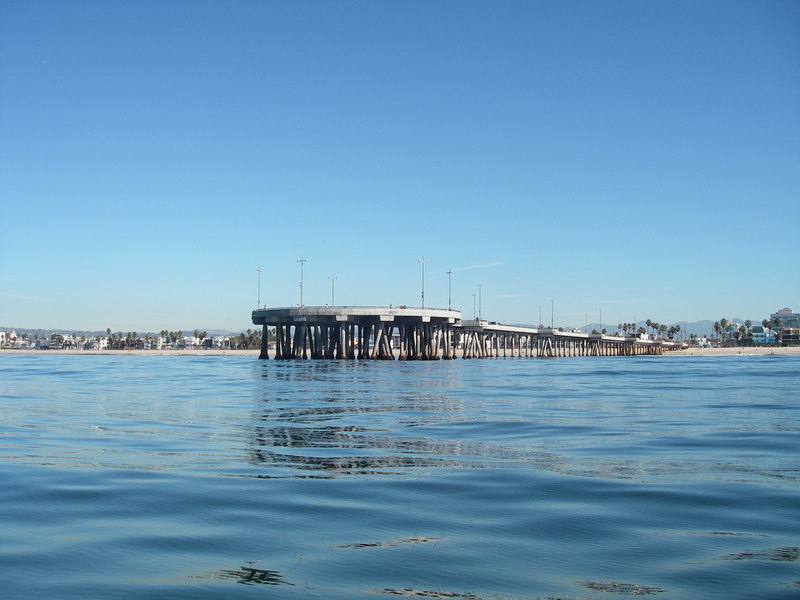 Environment. The pier, although fairly new, is actually a reconstructed version of the Venice Pier built in 1965. The pier, damaged by the El Nino storms of 1983, saw structural damage that necessitated rebuilding and/or repairing all of the deck (while retaining most of the existing pilings). Wise move! The pier is heavily used by the citizens of Los Angeles and its predecessor was in fact called the Los Angeles Pier for a time (although rarely by the locals). 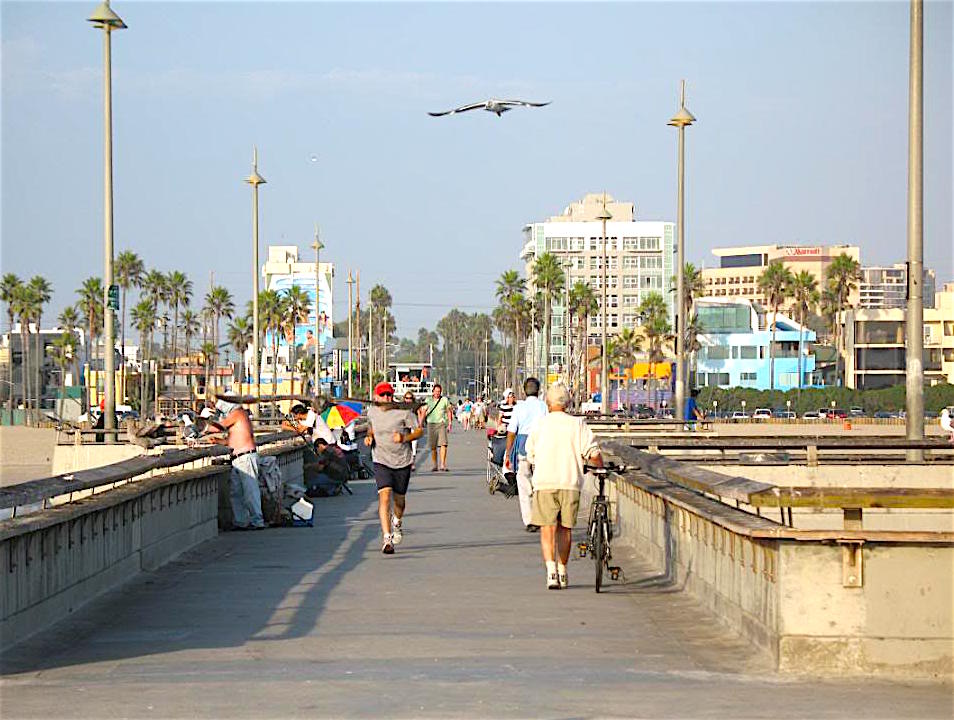 The pier itself is concrete and has a good growth of mussels on the pilings. The bottom is primarily sand but a 4,000-ton, artificial quarry-rock reef was placed around the outer 750 feet of the old pier in 1966 and should still be present. The sandy areas produce fairly consistent sandy-shore species while the reef helps attract fish that prefer a rock-dwelling environment.

To the southeast sits the rocky-jetty entrance to Marina Del Rey (with boats coming and going all hours of the day); small finger jetties jut out to the north of the pier. The pier has a 120-foot diameter circular end, which provides considerable space for anglers, and the length, at 1,310 feet, assures access to a little deeper water and the pelagic species.

Although Venice is one of the busiest piers in the southland, and often downright crowded, the pier normally seems to have a friendly, laid back, laissez faire atmosphere. It’s an amazing contrast to the nearby helter-skelter, free spirited activities just a short distance up the beach. And though the pier sees an amalgam of races, ethnicities, cultures, and languages (English, Spanish, Chinese, Tagalog, Russian, Farsi, Greek, Vietnamese, Korean, etc.), the people seem, for the most part, to all get along. Perhaps it’s the shared vision and dreams of catching “the big ‘un.”

Of course like any crowded pier, and this pier is often crowded, there may be a few knuckleheads in the mix. Don’t let crossed lines, overhead casters, or simple intemperate cretins ruin your fun.

The pier is located in the Venice (Muscle Beach)-Playa Del Rey area where there always seems to be something a happening, either on the beach itself or on the famous boardwalk (Ocean Front Walk). The beach with its body builders, weight lifters, and drum circles does get attention (Lonely Planet, 2005, says “Get your freak on at LA’s most hipsterrific beach”), but it’s the boardwalk that stretches between Venice and Santa Monica that’s truly amazing. The boardwalk’s a crowded, funky scene made up of street performers (including a chain-saw juggler and a fire eater during my last visit), snake charmers, roller-skating prophets, fortune-tellers, multi-colored hairdos, and wacky, stranger than strange tattoos. LA’s own website calls it a “sidewalk circus, a walk ‘n’ rolling skin show.” Lonely Planet says, “It’s a freak show, a human zoo and a wacky carnival.” I’ve often thought it analogous to the scene on the back of Bob Dylan’s Basement Tapes album.

Most of the action is interesting—and safe—but there’s also some persistent beggars and hair-brained druggies willing to stick their face in your face. Be cautious. The entire area is a place where activity is usually non-stop late into the night and it’s also a must see attraction for many visitors to Los Angeles (and one reason why parking can be a nightmare).

Even though most of the wild action actually takes place roughly a half-mile up-shore from the pier, the crowd overflows and a fisherman can, at times, look just a little bit out of place. Imagine our fearless angler, loaded down with rod and reel, tackle box, bait buckets, etc., as he winds his way onto the pier between iPod-attired line-skaters, bikini-clad goddesses, Schwarzenegger imitators, and perhaps just a little flotsam and jetsam blowing in the wind. What a sight! But, have no fear, our trusty angler will make it out to the pier to share time with fellow fisher-folk and hopefully catch a variety of fish.

However, some exotic fish do show up. Noted fishing writer Steve Carson sent me a note discussing the inaugural years of the pier and a very unusual fish: “during the first three years of Venice Pier’s operation, 1965-66-67, ‘Ratfish’ were fairly common; I can recall at least one day when about 10 were caught, but none after 1967.” The Pier Fishing in California message board recorded the catch of a yellow snake eel in November of 2006—out at the end of the pier.

Inshore, the most common fish will be corbina, barred surfperch, spotfin and yellowfin croaker and a variety of small sharays — round stingrays, thornback rays and small leopard sharks.

In the mid-pier area, anglers catch white croaker (tomcod), queenfish (herring), walleye surfperch, shinerperch, shovelnose guitarfish, Pacific sardines, Pacific mackerel, jack mackerel, jacksmelt, lizardfsih and California halibut. The ambush-predator halibut like to hang out in the depressions between the pilings. There they lay, almost indistinguishable from the sand, and looking up from the eyes on their topside. When an unsuspecting queenfish, smelt or other small fish makes the mistake of entering their zone, they shoot up and grab them.

The pilings themselves, and the small critters hanging on and about them, attract a plethora of perch and perch-like fish including blackperch, rubberlip seaperch, halfmoon, large opaleye and zebraperch. Unfortunately, the vegetarian zebraperch and its (sea chub) family cousin opaleye can be hard to catch.

At the large, circle-shaped end of the pier, anglers encounter some of the same species as in the mid-pier area but see additional species due to the artificial reef surrounding the end. Kelp bass and sand bass will show up as well as an occasional rockfish, rock wrasse, senorita, and (if you’re very lucky) maybe even a sheephead. More mackerel are caught, bonito and barracuda are taken (some years), and larger sharays are seen. 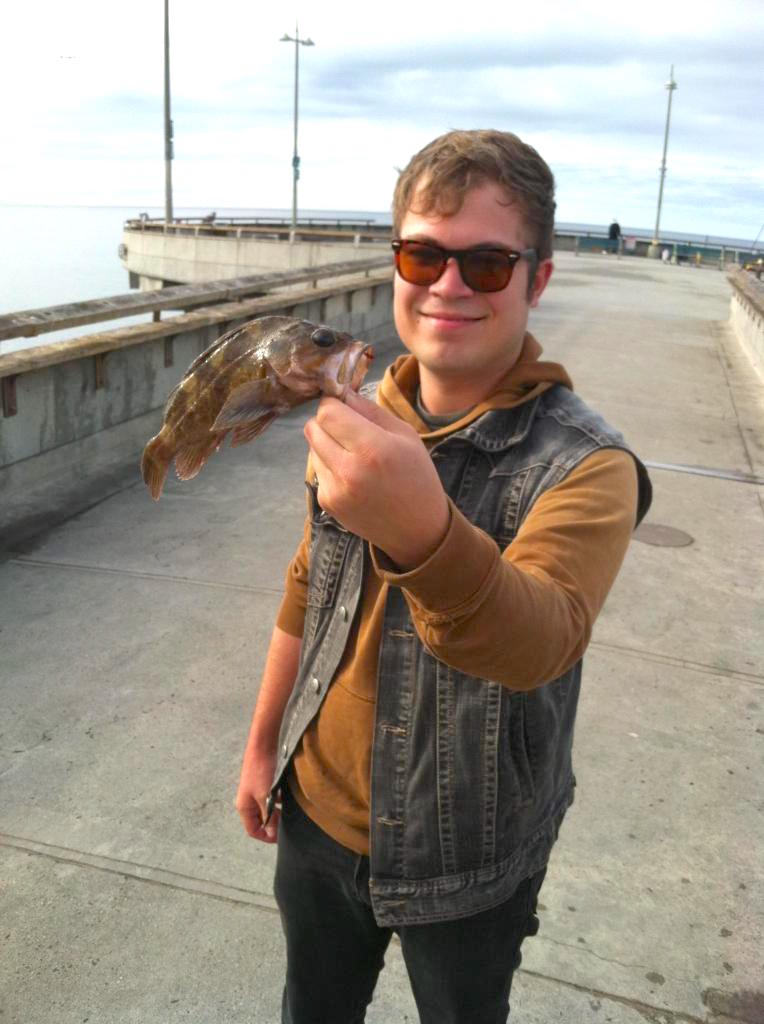 Included in the shark/ray catch are the usual big ‘uns—leopard sharks, shovelnose guitarfish and bat rays—but the pier also sees a few of the even bigger Selachians (sharks), species like soupfin sharks, thresher sharks, mako sharks, and even great whites. An approximate five-foot-long mako was taken in September 2008 while threshers make sporadic appearances; a 100+ pound thresher was hooked in July of 2005; a good run of threshers, including fish to eight feet in length were taken in May of 2008. Several great whites have been reported in the Manhattan Beach-Venice area and a young great white was hooked from the pier in September of 2011, brought to the surf, and carefully unhooked. The release was filmed and onlookers can be heard oohing and ahhing and calling for release of the poor little fish (aka maneater shark). Relatively uncommon, but occasionally seen, are horn sharks, angel sharks and electric rays. 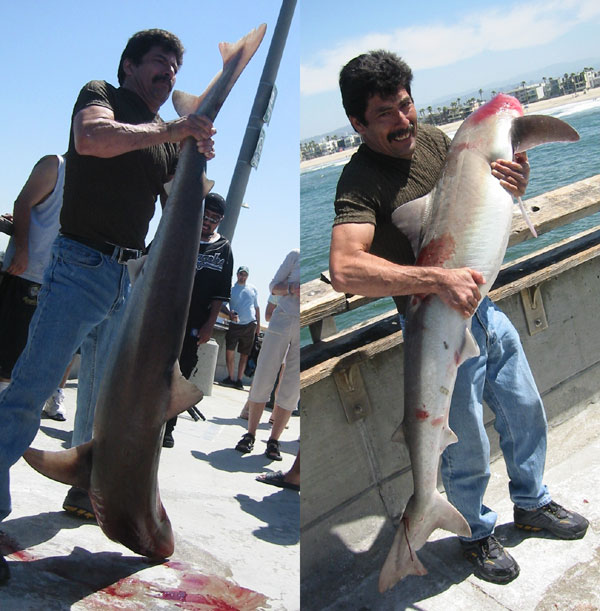 Not a great picture but a nice soupfin shark

Increasingly, as the big fish make a comeback, giant (black) sea bass are also being hooked from the pier. Remember that they are illegal and that they must be handled carefully (if at all) and returned quickly and gently to the water (if netted). Such was not the case in August of ’08 when a 20-pound or so youngster was brought up to the pier (a video of which showed up on several web sites). Of course everyone needed to take a picture with his or her cell phone before the fish was released (although a voice in the background can be heard urging people to “release it before it dies”). Finally the hook was removed, picture taking was at an end, and the fish was lifted up over the railing and dropped back down into the sea below. As might be expected, with all the time delay and mishandling, the fish didn’t survive the episode. El dumbo!