Identification: Very similar to the yellowfin croaker, however, the white croaker has a black spot under the upper base of the pectoral fin. The tip of the snout projects beyond the lower jaw and there are several tiny barbels under the lower jaw (unlike the one large barbel found on most croakers). Their coloring is metallic silver or brassy on the back, fading to a white or silver belly; fins are yellowish. 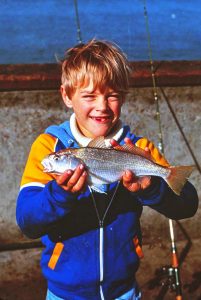 Size: To 16.3 inches and a weight of about four pounds (although it’s rare to see one over two pounds). Size seems to vary according to the region. In southern California and along the central coast, north to Cayucos, most of the white croakers caught from piers are under 10 inches in length. At more northern piers, fish of over a foot, and many approaching the maximum size, are common. However, based upon my purely anecdotal observations, I think there has been a decrease both in numbers and average size over the past 20 years or so.

Habitat: Recorded from the surf zone down to a depth of 781 feet but typically found in shallow, sandy and muddy bottom areas from 10-100 feet in depth—both in the ocean and in larger bays. They are considered benthic feeders (bottom feeders) and omnivores and their diet includes such delacacies as worms, shrimps, crabs, squid, octopuses, small fishes, and other items living or dead. They are primarily nocturnal feeders roaming the bottom looking for food at night but they will also feed midwater during the day. They are also a schooling fish so where you find one you will find more. They like to hang out with queenfish though usually the schools of queenfish will be at mid-depth while the schools of white croaker will be down nearer to the bottom. 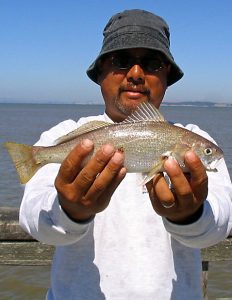 Piers: Common year-round on California piers north to San Francisco Bay. Best bets: almost every oceanfront pier in southern and central California lists white croaker as the number one fish caught (or at least in the top five). My personal records show a catch at 41 piers, from the Imperial Beach Pier in the south to the now closed Dowrelio Pier in the north (in Crockett, where the river waters from the Sacramento-San Joaquin Delta enter into San Pablo Bay).

Shoreline: A common catch by shore anglers in southern California.

Boats: Often taken by boaters in southern and central California but not considered a major species.

Bait and Tackle: White croaker will hit almost any bait, but the best is a small strip or chunk of anchovy or mackerel; second best would be bloodworms or pile worms. Typical gear is a high/low surf leader rigged with size 4 to 2 hooks. White croaker like to hit the bait as it is descending after a cast or as soon as it hits bottom. The best technique is to reel the line taunt as soon as the cast is completed; you will often feel the croaker hit almost immediately. Fish from mid-way on the pier to the deepest water. 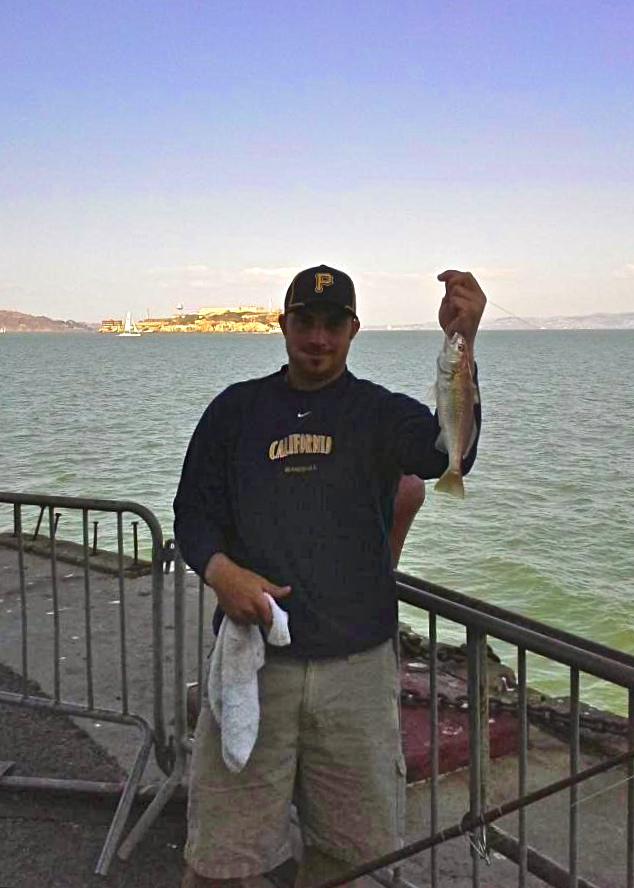 Food Value: A mild-flavored, low fat fish that is scorned by many due to its soft flesh, moderate odor—and fish warnings. However, it is also popular with many ethnic groups. Because of the fact that they are benthic feeders (bottom feeders) primarily feeding on the organisms living on the bottom, there’s a problem. The bottom creatures they feed upon, especially the various worms that live in the mud, often contain toxins in their system. To make matters worse, white croaker often congregate around sewer outfalls (leading to the nickname sewer trout) which escalates the problem and is one reason why white croaker are banned in more areas than any other fish (what a great honor!). Although the ingested toxins now in their flesh can be removed (to some extent) by proper cleaning and certain methods of cooking (broiling and baking), it is better to simply throw the fish back. This is primarily true in southern California areas, (especially the waters of Santa Monica Bay, off the Palos Verdes Peninsula, and the Los Angeles-Long Beach Harbor area). The same problem exists in the San Francisco Bay Area. Both areas see signs posted on piers warning (in several languages) about consumption of the fish. Most of the white croaker taken from oceanfront waters in central California are fine to eat (and they tend to have a firmer flesh than white croaker caught in the warmer waters of southern California). Best pan-fried or deep-fried.

Comments: White croaker have been, and perhaps still are, one of the most maligned and disliked fish by pier rats (see below). They seem too easy to catch, steal bait intended for more desirable fish, give little fight, and often have worms or other parasites in their flesh. In addition, they are basically unfit to eat in some areas because of local pollution. Anathema, accursed, and detested are some words that come to mind regarding the traditional view of these “trash” fish. However, since they are also highly regarded by some groups, are sold in considerable quantities by commercial fish markets, and often provide action when nothing else seems to be biting, it may be more a problem of attitude and education than a problem with the fish. Whereas the common approach by many in the past was to slam a “tomcod” down against the pier’s surface and then disgustedly kick it over the side, today more and more anglers are returning them to the sea.

From the Los Angeles Times, April 20, 1917—With the passage of the bill prohibiting the sale of trout in California after October 31 it will be necessary for the cafés and restaurants to see what can be done with a perfectly good tom-cod. Barring the bones and the meat they are not half bad.

From the Los Angeles Times, December 17, 1930—Tomcods, otherwise known as “Pasadena trout,” and sold on the market as “kingfish,” once placed well in the favor of the angler, but of late years have proved the anti-climax of those who go down to the sea to fish, but for some reason or other they do not hobnob with the mackerel, according to visitors of the big Alaska packer off the Lick Pier at Ocean Park.

From Fish Bulletin No. 49, The Commercial Fish Catch of California for the year 1935 by the DF&G, 1936—“In addition to the commercial catch of kingfish here shown, many kingfish and queenfish are taken each year by amateur fishermen, especially in southern California. Although generally scorned by sport fishermen, these fishes add much to the pleasure and to the larders of hundreds of people fishing off the wharves and piers along the California coast.—Frances N. Clark.”

From The fishes of the family Sciaenidae (Croakers) of California by the CA DF&G, 1939—“GENYONEMUS LINEATUS (AYRES), Kingfish, not a sport fish in the true sense of the word; nobody wants to catch them but everybody does. Most of the southern California sportsmen call the species “tomcod,” which is of course a misnomer, but many of them call it derisively “Pasadena trout,” which evidently is not appreciated by the inhabitants of this city, who in their turn scornfully refer to it as “Glendale trout.” The reason for the low standing of this fish is evidently the softness of the flesh and the idea that it is “wormy.” Late afternoons appear to yield the best catches, which is unfortunate since some of the desired croakers appear to have the same characteristic, but any time and nearly any reasonable place will give results. It is the only croaker taken from the wharves in central California. In at least one respect, however, the kingfish are desirable to the sportsmen. Small specimens can be used as live bait nearly as successfully as queenfish.”

As for the origin of the name Pasadena trout? The origin of the term is still unclear but perhaps a clue comes from a Ms. Verlaque who was a manager at the Pasadena Museum of History (via correspondence with Ben Acker—Dompfa Ben. She wrote: “I’m not sure when the name was commonly used, but the rapid growth of Pasadena in the late 19th century caused a number of sanitation problems, not the least of which was inadequate cesspools, particularly in the business district. Henry Markham Page wrote in his history of Pasadena: ‘the smell was so foul that Hancock Banning seriously considered moving his Pasadena Transfer Company from the Ward Block, which housed the Grand Hotel, to his coal yard on Los Robles where it was cleaner and the air better.’ A sewer system wasn’t completed in the city until 1888.” So perhaps fishermen, who undoubtedly began the use of the term “Pasadena trout,” were simply comparing what they felt was a stinky, wormy fish with a stinky town? Who knows?