The second pier is this pier at Nick’s Cove, located midway between Lawson’s Landing and the small town of Marshall (roughly four miles south of Lawson’s Landing and four miles north of Marshall). As a condition for building the pier, the owners of the facilities (restaurant, bar and cabins) at Nick’s Cove were required to offer “public access” to the pier and the pier is open from sunrise until the close of business. Given that data, it would appear to be a public pier.  However, since the pier is managed by the owners of Nick’s Cove, sits next to the shoreline  restaurant, and has a “Boat Shack” at the end of the pier, some argue that it technically is a private pier. The latest input we have had from the Department of Fish and Wildlife is that it is indeed a private pier necessitating a fishing license. 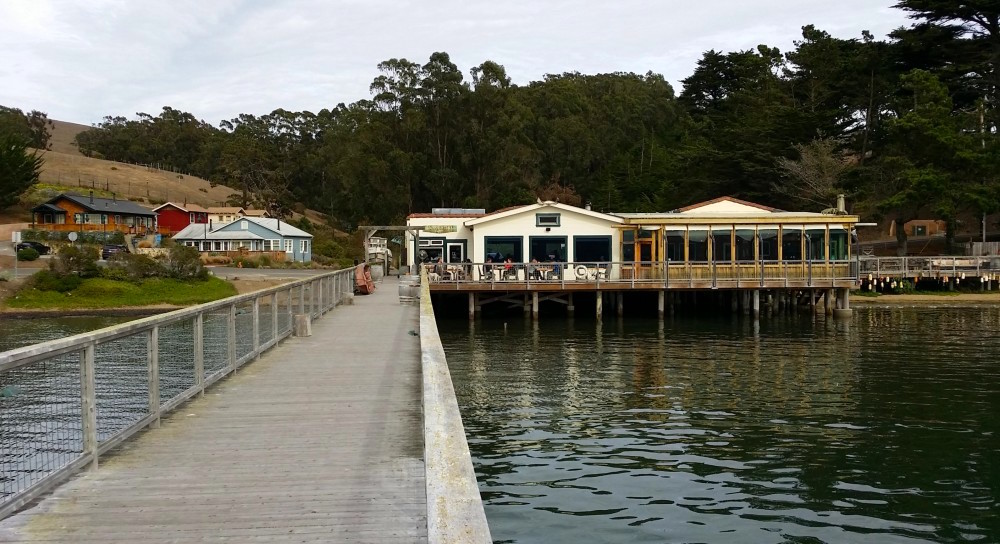 Technically, the pier is part of the larger Miller Park fishing access area, a long narrow park that hugs Highway 1, the Shoreline Highway. In the park is the popular Miller Boat Launch and a small jetty that can also be fished. This pier sits at the very southern end of Miller Park. At one time there was a small pier next to the boat launch and that pier was called the Miller Park Pier. It only measured 130 feet long and 4 feet wide (so angling space was limited) but was used until destroyed in the late 1980s; That pier is now history replaced by this nice 400 foot-long-pier that was built in 2007. 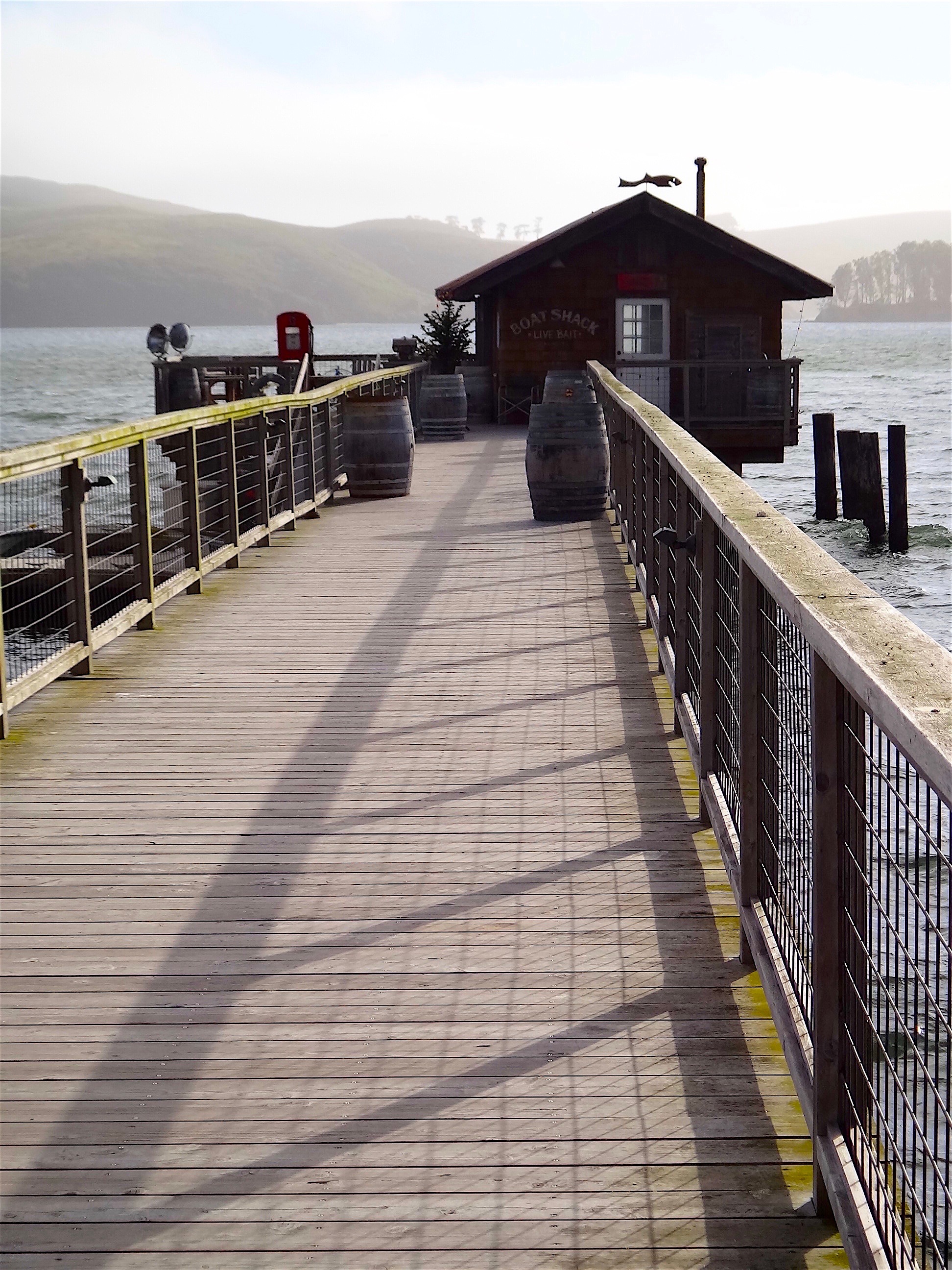 Environment. This is a shallow-water pier that during low tides can see much of the inshore area seeing more mud than water. There are virtually no rocks although eel grass beds start about two thirds of the way out on the pier. Pilings have some barnacle growth but no discernible mussels.  The most common fish are probably shinerperch and staghorn sculpin, both of which can blanket the bottom and mid-depth water, especially  during the summer months. Other commonly encountered species include white seaperch, walleye surfperch, dwarf surfperch, striped seaperch, blackperch, topsmelt and jacksmelt, sand sole, Pacific sanddab and California halibut, brown rockfish and small copper rockfish. The sharays are represented by bat rays (aka mud marlin), brown smoothhound sharks (especially the young pups in spring and summer), leopard sharks, and big skates. 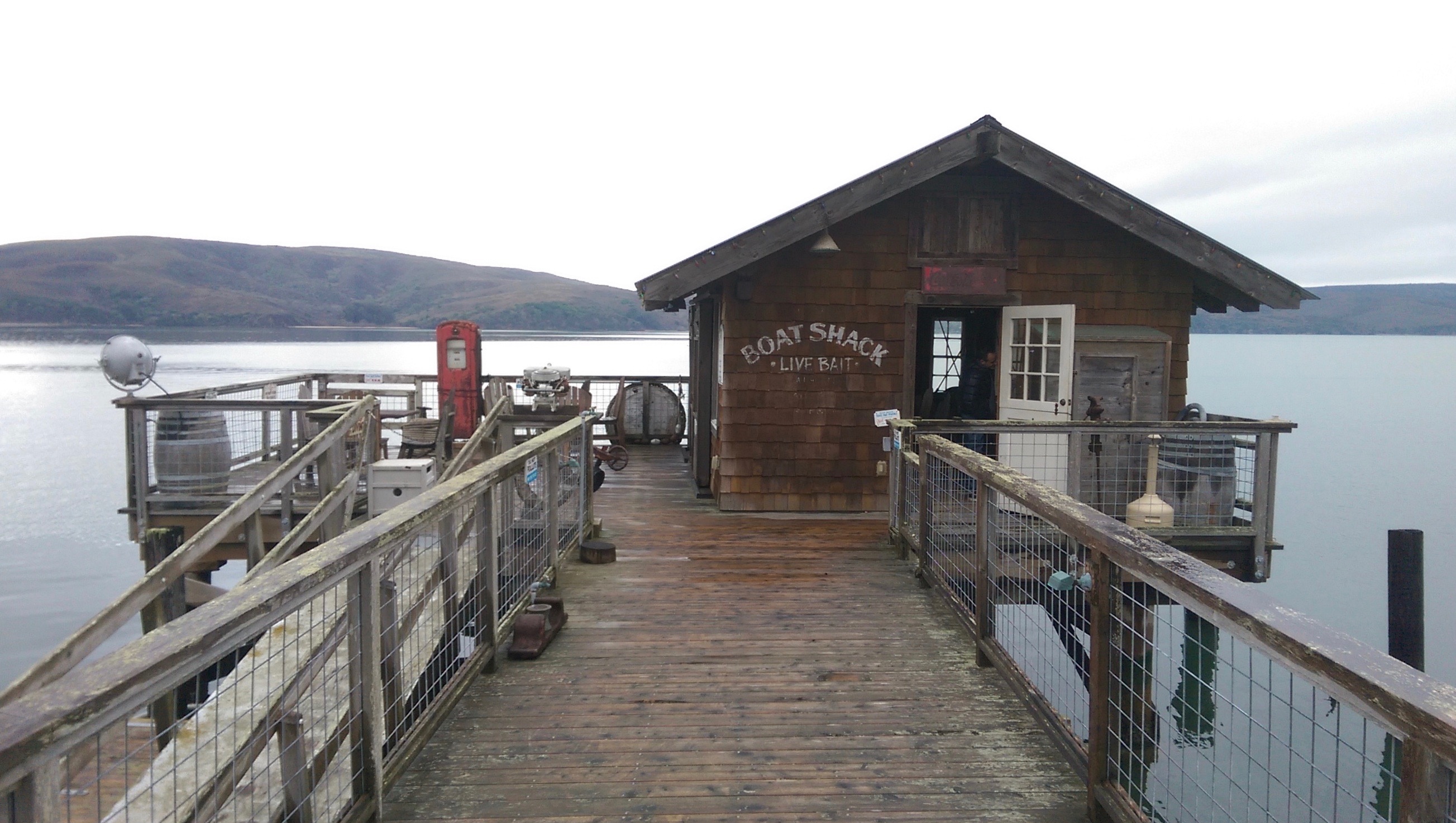 Fishing Tips.  By far the best spot is out at the end but availability of course depends upon how many people are fishing from the pier and how many people are crowding the area around the “boat shack.”  The main recommendation is to fish around the high tide, that is when you will be presented an adequate water depth to attract in some fish. The fish will move in with the tides but nevertheless, you aren’t going to catch as many fish here as at nearby spots offering deeper water.

In the springtime, schools of perch should come in to feed on the worms and ghost shrimp found in the muddy bottom so you naturally (or hopefully) will bring along some pile worms and ghost shrimp (if you can find them). Pile worms were usually available at the Tides Wharf in Bodega Bay but you will need to pump your own ghost shrimp from local beds, or bring some from the Bay Area. You might encounter striped seaperch or rainbow seaperch but not in the numbers seen in rocky areas. More common will be black seaperch, white seaperch, and a few rubberlip seaperch. As summer progresses, more and more shinerperch will invade the area and they, together with some silver surfperch and walleye surfperch, will offer most of the excitement for youthful anglers during the vacation months.

Jacksmelt and topsmelt will often be found at a mid-depth level and can be caught by those using a multi-hook leader baited with small pieces of pile worms on size 8 hooks. To prevent the rig from going to the bottom and being attacked by shinerperch, anglers can use a large bobber or other type of float to keep the hooks at mid-depth.  Unfortunately, on a low tide the hooks may still be near the bottom.

Flatfish, including sand dabs and a few starry flounder might show up during the winter and spring while sand sole and halibut will be around in the May-September months. Most of the flatfish can be taken on a high/low leader baited with cut anchovies, grass shrimp, or pile worms. The larger halibut, as always, prefer live bait and shinerperch are a top bait. Just fish the shinerperch on the end of a Carolina rigging. Soft plastic lures will also attract the flatties.

Tomales Bay is a noted spot for sharks and rays but unfortunately the shallow-water depth usually found around the pier hurt the fishery. Still, when the tides were right, and especially when they occur during the evening hours, some brown smoothhounds, leopard sharks, and bat rays will wander into the area. The largest fish are the bat rays. If  specifically fishing for the rays, use squid (the best) or cut bait. If fishing for the sharks use an oily fish bait, i.e., cut mackerel and sardine. The large leopard sharks also love live midshipmen.

Special Recommendation. It was always wise to bring a warm jacket with you to this pier. Summer time temperatures are often cool, springtime is often windy, and during the winter, rain can be expected. However, in the fall, conditions are sometimes balmy.

History Note. Miller park itself was developed during the late 1950s with construction apparently finished in 1959. 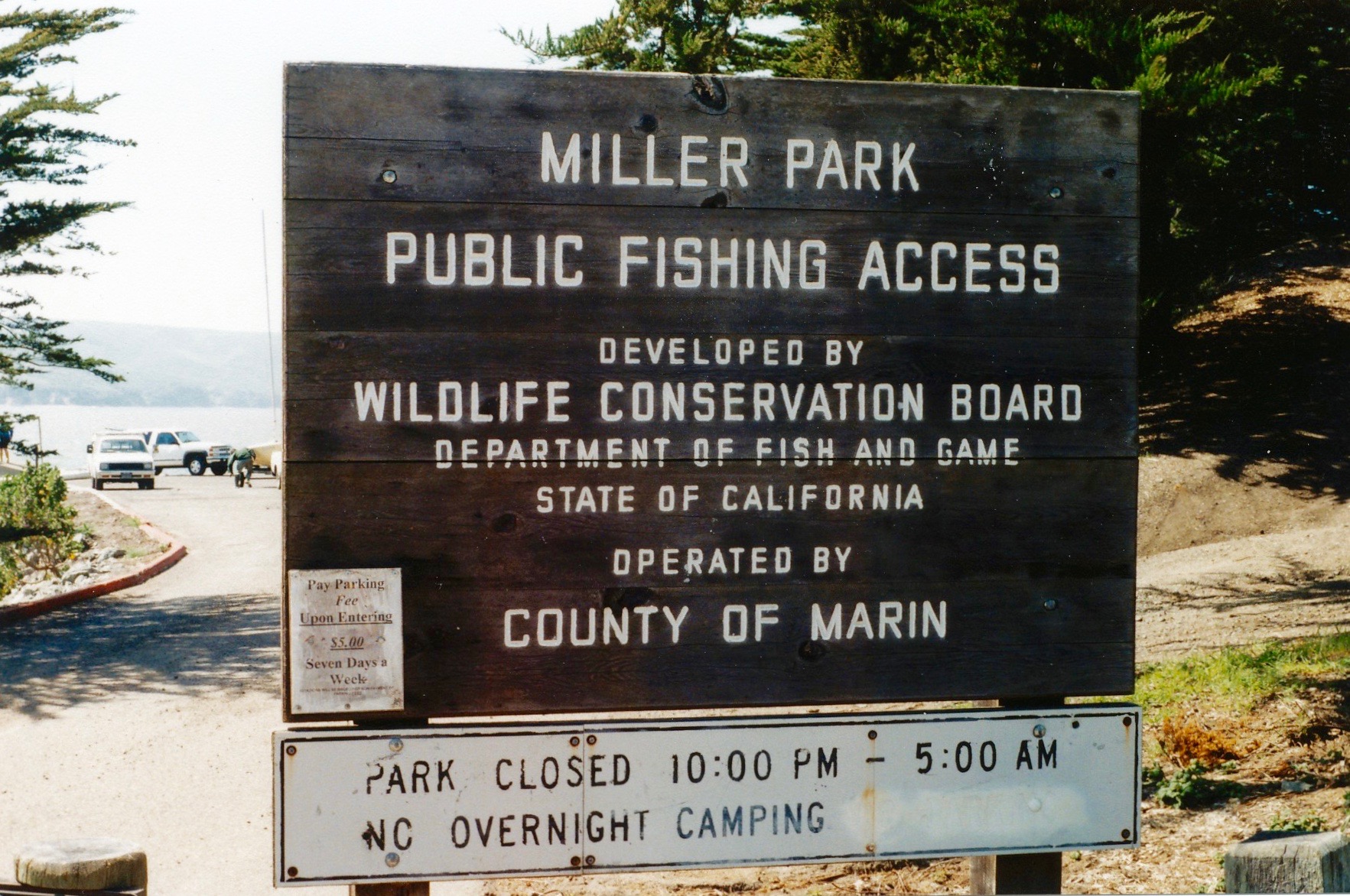 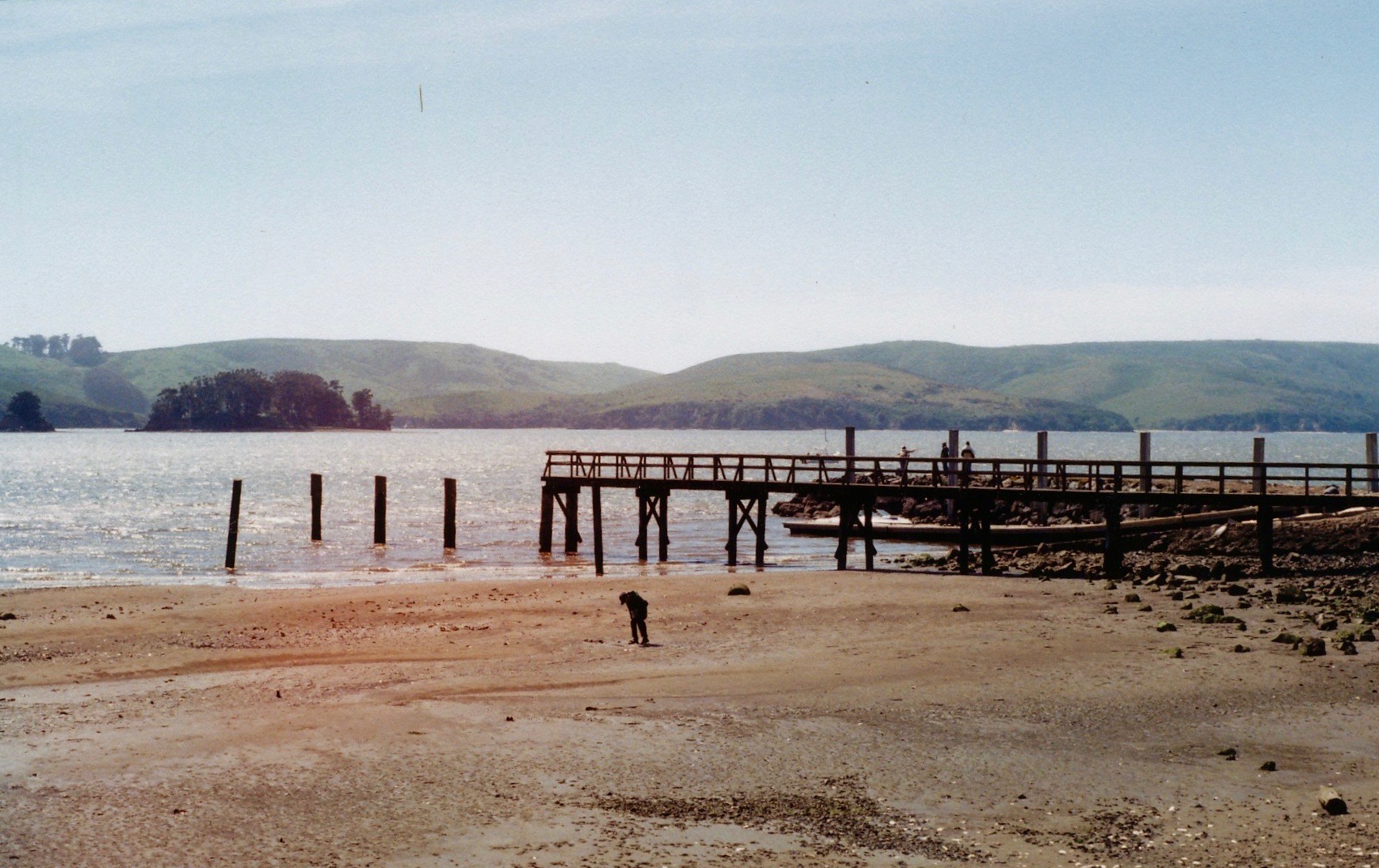 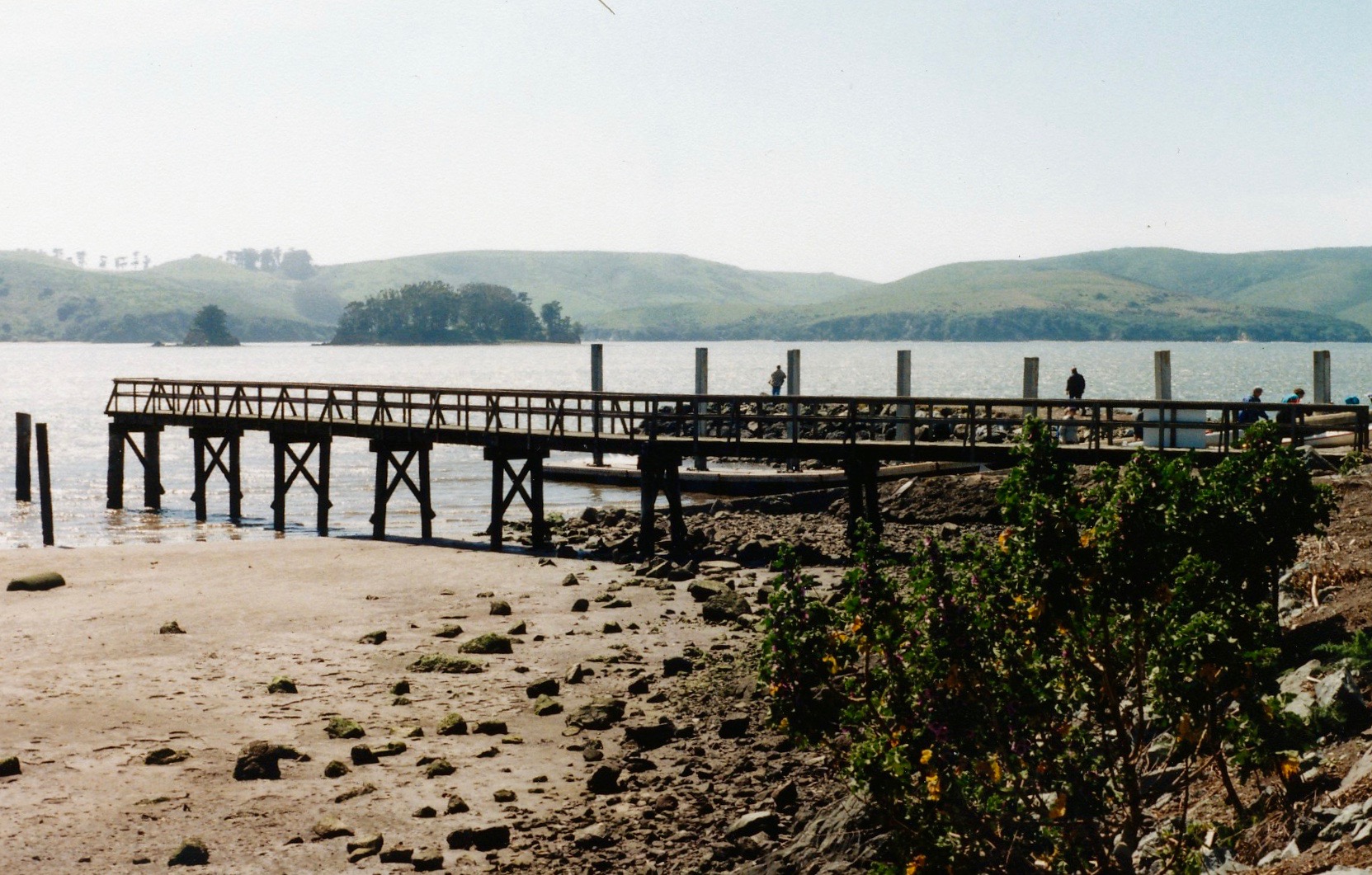 Hours: Sunrise until close of business at Nick’s Cove Restaurant.

Facilities: Basically none although limited free parking is near the front of the pier. At the front of the pier sits the restaurant and bar. It serves good food and is a happy place for locals and more distant visitors to have a drink or two. Given their supervision and support for the pier, stop in for a meal or a drink.