Species: Squalus suckleyi; from the Latin word squalus (shark) and suckleyi honoring George Suckley (1830-1869), a naturalist and Civil War surgeon OR Squalus acanthias (Linnaeus, 1758); from the Latin word squalus (shark) and the Greek word akanthias (spines). Pick A or B—but why the choice? It’s an ichthyologist thing! Squalus acanthias is the scientific name given to the common North Atlantic (or worldwide) dogfish. Squalus suckleyi is a name given to the dogfish found in the north Pacific. These fish are considered a distinct species by some ichthyologists. California Fish & Game Bulletin No. 28, edited by Lionel Walford (early ‘30s), lists the scientific name of spiny dogfish as Squalus suckleyi. California Fish & Game Bulletin No. 91, edited by Phil M. Rodel (1953) lists the name as Squalus acanthias and makes the following statement, “The north Pacific and north Atlantic dogfishes were long regarded as separate species (S. suckleyi and S. acanthias respectively), but Bigelow and Schroeder (1948) found no difference between them. Because the Atlantic dogfish was described first, its scientific name takes precedence.” Since that time the California Fish & Game has used Squalus acanthias as the official scientific name. In Sharks, Rays, and Chimaeras of California by David A. Ebert (2003), perhaps the pre-eminant book on these species, he uses Squalus acanthias and states, “no significant morphological characteristics have been found to separate these species.” Still, if you open ten books you may find five listing one scientific name, five the other. Since my main man for identifying fish, Milton S. Love, Love Lab at UC Santa Barbara, uses suckleyi, we will go with that name.

Alternate Names: Dogfish, dog shark, gray shark, grayfish, paloma, spinarola (in Humboldt Bay), pinback shark, mud shark, sand shark, Henle’s shark, and my favorite, green-eyed grinner. One name that seems strange, but which also is the name of a town I once lived in, is Pinole. The fact that dogfish have an almost worldwide distribution means they also have a plethora of interesting names. On the west coast of America dogfish are called k’aaxada can, q’ad can or kaad (Haida and Tlingit—British Columbia,) and tiburó de Espina or galludo (Mexico). Given their worldwide distribution, dogfish may be the winner of the “Most Alternate Names Award.” Apparently, the common name “dogfish” originated not from looking like a dog, or barking like a dog (although that would be interesting), but from fishermen who described these fish as chasing smaller fish in large dog-like “packs.” 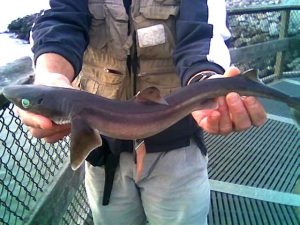 Size: To slightly more than five feet (63 inches); those caught at piers are generally two to three feet in length.

Range: Found throughout temperate seas; in the eastern Pacific it’s found in the Gulf of California and along Mexico’s Pacific coast, Isla San Martin, southern Baja California, north to California’s coast and bays. It is common in Oregon and Washington and ranges north to Alaska, the Aleutian Islands, the Bering Sea and the Chukchi Sea on the edge of the Artic Ocean. It ranges south from there to Russia and Korea and in the western Pacifc ranges down to New Zealand. A population is also found in Chile. Dogfish (a different species?) are found in the western Atlantic Ocean from Greenland to Argentina and in the eastern Atlantic from Iceland and Murmanski Coast (Russia) to South Africa including the Mediterranean Sea and Black Sea. An example of their range (and wandering nature) was seen in a dogfish that was caught on the half-day boat Daily Double off San Diego on September 23, 2013. It had been tagged on July 20, 2010 in Yakutsk Bay in the Gulf of Alaska, 1,847 nautical miles away. Found intertidally down to 4, 789 feet. 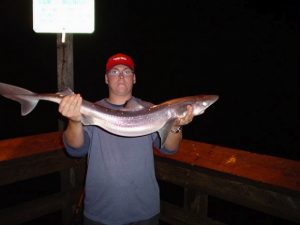 Habitat: Generally found in deeper water in southern California and shallower water north of Point Conception. Inshore areas see the best fishing from the spring to the fall; may move offshore during the winter. Typically found in large schools with young, immature dogs found in mixed groups of males and females; older, mature dogs hang with those of a similar sex, males in one school, females in another. How boring.

Piers: Although many dogfish are caught from piers in Washington and British Columbia, they are of much less importance to piers in California. Nevertheless, a number are caught every year from piers in central and northern California. Best bets: Pismo Beach Pier, Cayucos Pier, Capitola Wharf, Santa Cruz Wharf, Pacifica Pier, San Francisco Municipal Pier, Fort Baker Pier, Fort Mason Piers and the Berkeley Pier. Almost any of the piers in Humboldt Bay can also be labeled excellent. Quite a few have also been reported from the Huntington Beach Pier, Hermosa Beach Pier, and Ventura Pier, all in southern California.

Shoreline: A few are caught from shoreline areas in Humboldt Bay.

Boats: A common catch for boaters in Humboldt Bay and occasionally taken by rockcod anglers from central California north,

Bait and Tackle: Most dogfish caught from piers are of moderate size, 18 to 36 inches long. Because of the sharp teeth, a light wire leader or heavy monofilament line should be used. Generally medium tackle is used with hook size 2 to 4/0. Best bait seems to be squid but in San Francisco Bay ghost shrimp and small live fish also work well. Dogfish have a disturbing habit of twisting around the line and are a pain in the proverbial butt to remove. 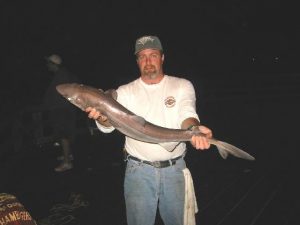 Food Value: Considered a fair to good quality fish. The flesh is small flaked and firm, off-white in color after cooking, and somewhat robust in taste. It is moderate in fat content. It is generally considered best suited for frying; both pan frying and deep-frying. The English must agree since they have used dogfish for their fish and chips for centuries. However, it is also very popular in Europe as a hot-smoked product, especially in Germany and the Netherlands. It does need to be cleaned properly and kept cool before cooking.

Comments: Spiny dogfish are, in pure numbers, probably the most common shark in the world. Since dogfish generally swim in large schools, if you catch one there is a good chance that others may not be too far behind. On a trip to Washington back in the ‘70s, I learned about their prodigious numbers and schooling nature. In Tacoma there was a sportfishing company called Dogfish Charters. Although the boats primarily fished for walleye pollock, rockfish, and Pacific cod, the dogfish were bound to show up. In fact the boat offered a free trip to anyone who failed to catch a dogfish. How did I do? Mixed in with 20+ pollock and copper rockfish were four dogfish. I didn’t earn a free trip—darn! 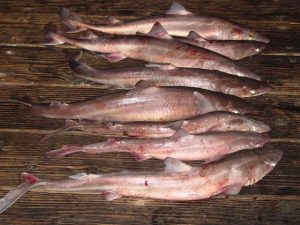 Another example of their numbers was seen during a doctor’s office visit in 2013. One day I was calmly gritting my teeth and nodding approvingly as my doctor stun-gunned my face and asked if I was OK. The ”this might sting a little” routine had out lived its usefulness but I would show my manliness and toughness by refusing to show the pain (and there was pain). Following the masochist session we talked of fish. She asked if I had ever heard of dog sharks? “Yes, but they are actually called dogfish sharks, so called because they travel in packs like dogs.” She said she had been at the Pismo Beach Pier in August when she had seen 50-60 dog sharks, most around three feet in length, laying on the deck at the end of the pier. Anglers were bringing more sharks up every few minutes. It was dark and as she had looked down into the waters she said she could actually see the sharks massed below. I asked if the anglers had said what they intended to do with the sharks and she said they were going to eat them. “Good thing,” I said, “since I hate to see fish wasted.” No wonder a lot of guys like to fish the Pismo Beach Pier for sharks!

The number of dogfish does seem a little surprising to me. Although the fish can live to be 70-80 years old, females are not mature until about age 35. Though the ladies can produce 70-80 young in a lifetime, how many actually reach maturity? Questions, questions!

A final note! For years dogfish were one of the most common cadavers used by junior CSI’ers cuttin’ up bodies in high school biology (along with da frogs). Today, some scientists have discovered they can use the cartilage from dogfish spines in a cancer medicine. AEterna Laboratories, a small Quebec company, uses purified spines to produce Neovastat, a medicine that seems to inhibit blood vessel growth in lung and kidney cancer tumors. The result is longer lives and a better quality of life. Although still experimental, results to date are very promising.

The medical uses for dogfish are not new. As described in Some Common Marine Fishes of British Columbia by G. Clifford Carl (1973), “Both the oil from the livers and the flesh were eaten by Indians on the west coast of Vancouver Island and Cape Flattery.” Interestingly, he gives a quote from (Swan, 1870) which gives reference to George Suckley, the doctor used in the scientific name Squalus suckleyi. “Dr. Suckley states that while he was on service as surgeon at the U.S. military station at Fort Steilacoom, he used dogfish oil with great success in pulmonary affections, and considered it, when fresh, equal to cod-liver oil.” So there you have it, the rest of the story.