Identification: Butterfly (diamond) shape with the disk almost twice as wide as long. Tail short with a small sting at its base. Brown to gray above with darker and lighter mottling; white below.

Size: Width to 5 feet. Most caught from piers are 2-3 feet wide. 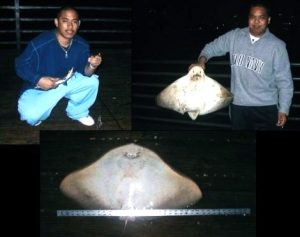 Range: Paita, Peru, and the Gulf of California, to Point Conception.

Habitat: Common in shallow bays and along sandy beaches. Recorded to a depth of 308 feet.

Piers: Most commonly caught at piers in the San Diego area. Best bets: Ferry Landing Pier (Coronado), Embarcadero Marina Park, Imperial Beach Pier, Ocean Beach Pier, Crystal Pier, and Oceanside Pier. (Quite a few show up in the scientific records as being taken from the Scripps Pier in La Jolla. First recorded there in 1945.) 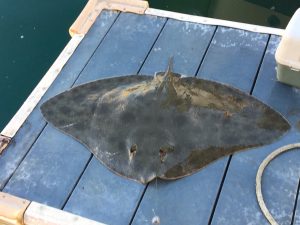 Food Value: Very good if cleaned quickly and kept chilled. The flesh is mild-flavored and the texture is firm. I caught a good-sized butterfly ray one day while fishing at the Ocean Beach Pier, put it on ice before returning north, and it turned out to be delicious when fried up three days later.

Comments: An incidental catch for most anglers; few anglers target them as a species. However, it is apparently a favorite ray for “eating” in Mexican waters with its white flesh considered superior to that of other rays.