Mullet caught at Carlsbad by jkim in 2004

Species: Mugil cephalus (Linnaeus, 1758); from mugal (meaning to suck, in reference to their feeding behavior) and cephalus (pertaining to their distinctive head

Identification: Torpedo-shaped with 2 widely spaced dorsal fins. Head broad, flat between eyes. Mouth small. Silver, gray or olive-green on the back with faint black stripes on the sides, silvery below; small black spot at upper base of pectoral fin. 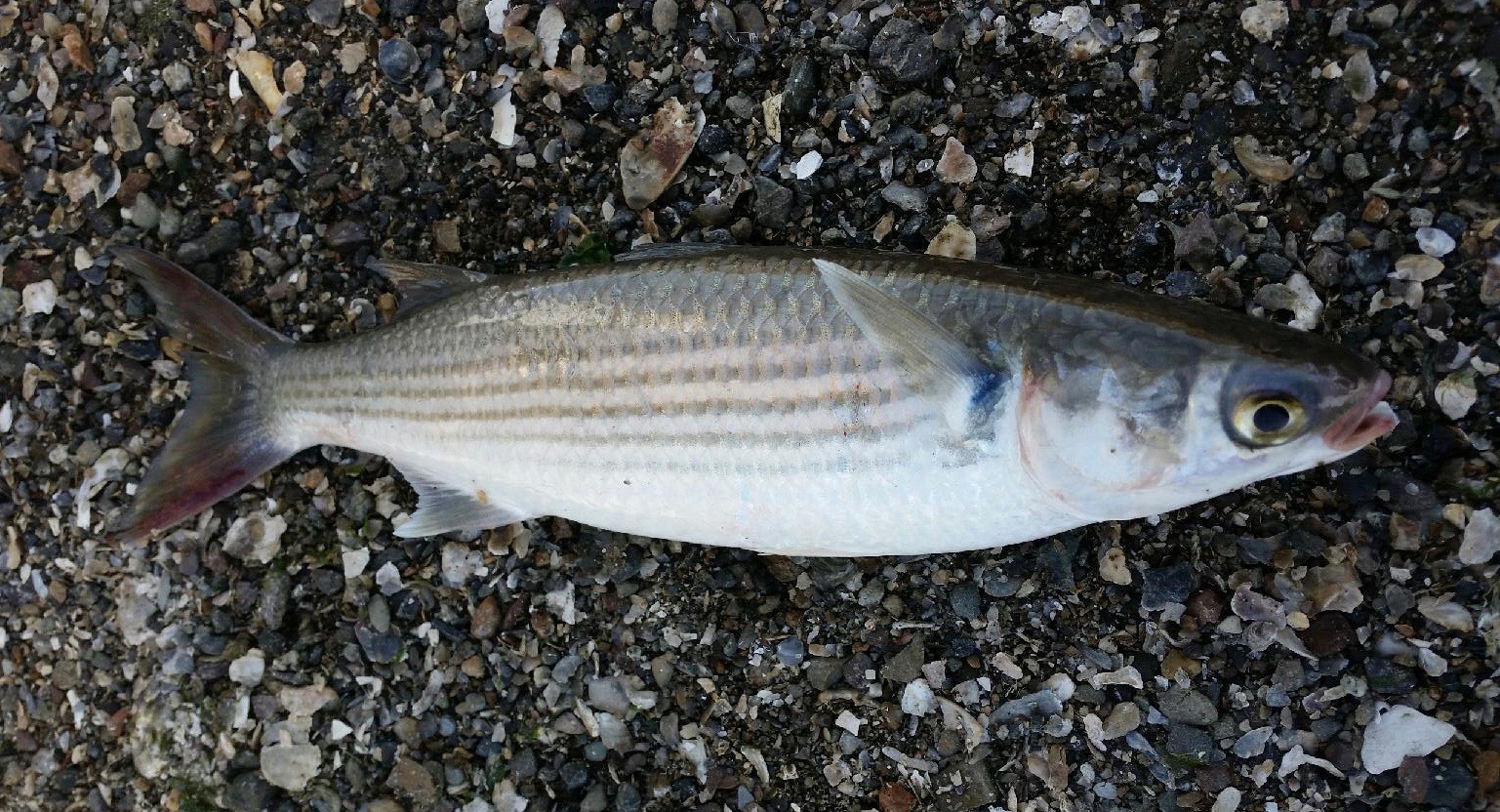 Habitat: Typically in intertidal, shallow waters but recorded to a depth of 400 feet. Coastal ares including estuaries and the mouths of streams and rivers. 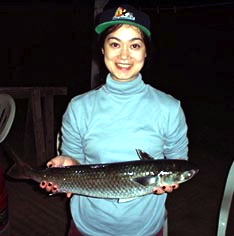 Mullet caught at Newport in 2002 by Hyok

Bait and Tackle: Very hard to catch. Most are snagged by people using large hooks and medium-heavy tackle. Tiny hooks, size 12-10, baited with dough balls are the standard rigging for sport fisherman.

Food Value: An important food species in some areas. Mild flavored flesh with an off white color, small flakes, and soft texture. They are low in fat content and suitable for all methods of cooking. 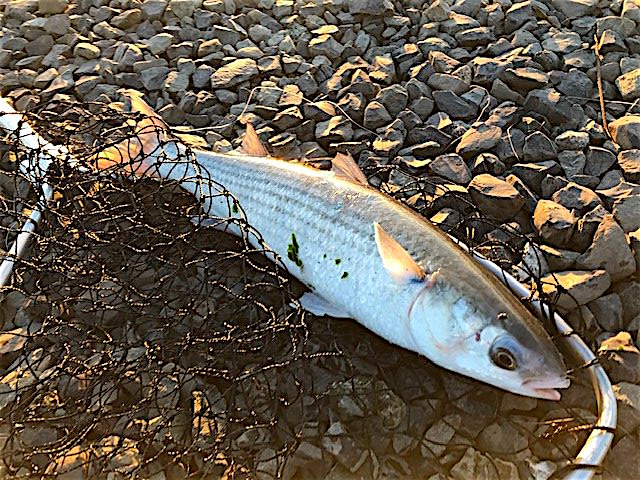 Comments: Common, especially in some bays. Although a large recreational fishery exists for mullet in Hawaii, relatively few people in California target them. However, because of their large size some groups do seek them out (although few people at piers). Mullet feed on algae and detritus on the bottom, sucking up large mouthfuls from the muddy or sandy bottoms. These are usually the fish seen jumping in bays.

An old article —Mullet — Billy Warden, one of the best known of local salt-water fishermen, claims to have solved a piscatorial puzzle that has perplexed the minds of many scientists. He has found out what the gray mullet feed on, and has succeeded in catching them in Alamitos Bay with the hook.

Mullet have always been even more mysterious in their habits than are most fish. Nobody knows from where they come or to what places they resort. McGarvin and other professional fishermen some years ago made big hauls in Alamitos Bay with their nets. Warden opened the stomach of a mullet one day and found it full of a sort of gelatinous grassy fiber. Recognizing the plant he fastened a wad of it upon his hook and cast out, being awarded promptly with strikes. He took two fish in this way and lost many baits, declaring the sport was keen enough if one could get the bait.

Mullet are very active on the hook. Their mouths open like a fly trap and no one would accuse them of being shy biters from their facial makeup, but such they are. Always fat and unusually sweet, they are accounted among the best of fish and command a high price in markets.

They seem to be getting rarer as the years roll by. In markings they resemble the striped bass but have a bullet head and cylindrical body. In weight they range up to corbina size, possibly larger, though big gray mullet are not known on this coast as they are in Florida, where specimens of huge size are sometimes taken. They bite more freely on the other coast and are a popular game fish though never easy to catch anywhere.

Warden, who bears the average reputation among fishermen for truth and veracity, is a great prospector and has uncovered many good places for surf* and bass that are yet unknown to the ordinary run of sea anglers. He and his partner, Jerry Mullen, used to walk eight or ten miles south of Long Beach for surf fish long before the electric line was completed. —Los Angeles Times, August 17, 1904, * = In those days corbina were often called surf.

I must admit I am not an expert on catching mullet. On a trip to Honolulu, Hawaii, I once observed a school of mullet in some canal waters and tried to catch them without success (using shrimp as bait). Later, while on a trip to La Paz, Mexico, I again watched some schools of mullet in the waters of a marina. At the time I was unable to try for them.

Since then I have given considerable thought to mullet and read quite a bit about them and their feeding habits as well as looked at different recommendations from many sources. One of the best sources I have read is from Fishing Hawaii Style. Volume 2, by Jim Rizzuto. It’s a book I picked up on that trip to Hawaii and gives a good glimpse into both the fish of Hawaii and the different techniques used to catch them.

From Fishing Hawaii Style — “Fishing for mullet with hook and line requires patience and special techniques…If you are looking for a challenge (perhaps even the ‘ultimate light-tackle challenge’), mullet is your adversary. It’s hard to find…hard to hook (a vegetarian, in fact) and hard to land (hooks tear easily from the soft mouth)…Our grandfathers used to watch the paths the schools took as they traveled across the reef channels into the calm waters of bays, canals, harbors…they marked these routes with fishing platforms…they carefully baited the still waters with breadballs mixed with sand to carry them to the bottom where the schools passed…the baiting process would go on for months until the mullet were trained to look for bread in the area. The angler was ready for a fishing season to begin…The breadball on the hook had to hang suspended about six inches above the bottom…A slight twitch marked each “strike”—really no more than a quiver. If the angler did not meet the strike with an instantaneous response, the mullet was gone with the bait…A hooked fish had to be lifted free of the water with a minimum of fight to avoid scaring the rest of the school away. This was difficult because the soft issue of the mouth provides the weakest of anchoring points…Mullet swim into…brackish water, shallow and protected, and fertile with mossy algae spreading across the bottom…Anglers collect the algae…and baiting the hook is done simply by swirling it around in the pail until a suitable-sized mass of fibers clings to it…Most fishermen rig a pair of hooks (#6, 8 or 10) in tandem, about 2 inches apart. The two-hook rig not only holds more bait but gives a second point that sometimes acts as a snagging hook…To suspend the bait the required 6 inches off the bottom, the rig is floated with a light bobber…light enough to quiver at the slightest touch of a mullet…The leader should be weighted with just enough shot to pull the bait down…As with all fishing for wary fish, the lighter the leader the better. Some fishermen feel they can get away with 4- to 6-pound test. Others swear that 2-pound test is essential.”

Remember that mullet typically feed on the bottom — on marine invertebrates, algae, and various detritus. Most mullet seen in California are seen in bays where they are typically feeding on the bottom. However, some mullet are seen every years hanging under oceanfront piers, sometimes large schools with large fish. Rarely are they hooked but sometimes they are snagged. It’s hard to say if the fish are feeding given they are seen from above and probably near the top of the water.

Ideas I would try (and I am not including ideas on snagging):

Line—I would use 6-8 pound fluorocarbon line (strong enough for the occasional large mullet).

Hooks—I would try size 8 and smaller hooks, preferably size 10 or 12.

Rigging—I would try the double hook (basically high/low rig) together with a slip bobber and a split shot used to get the bait down by the bottom.

Bait—Given the reports of anglers in Florida and Hawaii who catch them on dough balls, I would try the following: (1) Moss such as that used for opaleye in the Los Angles and San Diego area. It’s available at some bait shops. (2) Frozen peas as used for opaleye. (3) Dough balls. There are many dough ball recipes on the Internet but I think   the following would be a winner: Use a mash made of cooked oatmeal by itself or oatmeal and cornmeal (or flour). Mix it with moss or peas and add a small amount of water to get the right consistency before forming small dough balls that match the size of your hooks. You want the dough balls to be firm enough to stay on the hook but not too firm that they will be torn up when putting them on the hook. And, if too soft, they may simply disintegrate in the water. You could also try using a fish attractant oil, i.e., ghost shrimp smell, instead of the water when preparing the dough balls.

Handle all with care much as you would any soft bait, i.e., fresh mussels (and mussel juice might also work as an attractant with the dough balls).

Last but not least, don’t be afraid to  experiment and try different baits and techniques. Practice (fish) until you find the approach that works.