This fairly long pier is the oldest Wildlife Conservation Board Pier in the area and receives quite a bit of angling pressure, although nowhere near the action I would expect in this area. In part it is probably due to reports of violence in the area, particularly at night, but I have never had nor seen any problems. However, more pier anglers seem to head up to the Antioch Bridge Pier and an increasing number head over to the pier by the Antioch Marina. 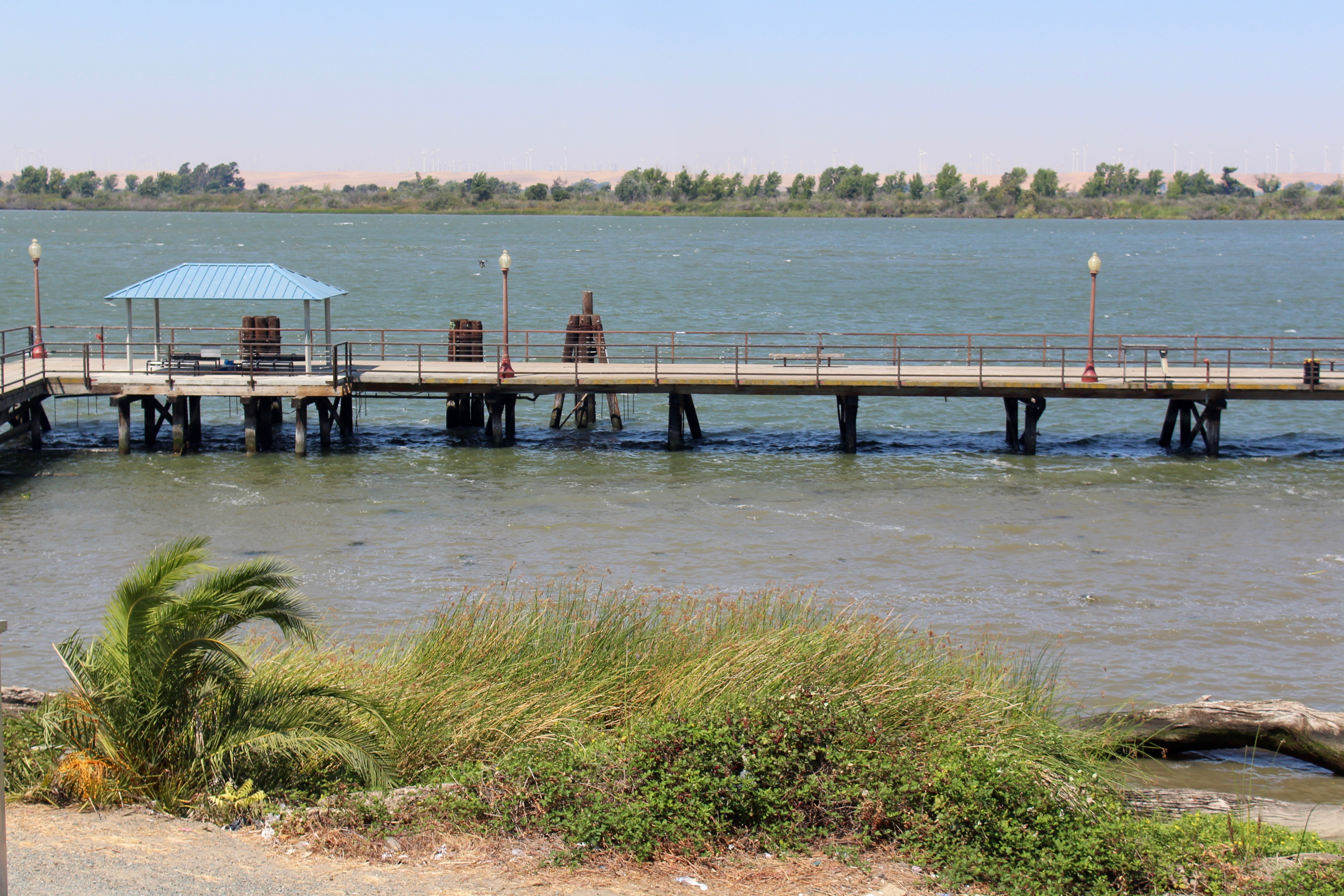 Environment. The pier provides fishing in the San Joaquin River and is a timber structure 489 feet long and 14 feet wide (although one source disagrees—“ The fishing part of the deck measures 24 ft. x343 ft. The approach deck is 8 ft. by 130 ft. and is handicap accessible”). I haven’t measured it but feel the former figures are more accurate; in either case, it is one of the largest Delta piers.

It was completed in early 1967, dedicated on February 18, 1967, and then slightly refurbished in 1984. Water depth ranges from fairly shallow inshore to fairly deep (around 50 feet) out from the end, and fishing seems better to me than at the marina pier which sits just downstream. Similar to the marina pier however is the ledge that runs parallel to the pier. Just past the ledge is a sharp drop-off and good sturgeon fishing, but the ledge is also a great tackle grabber. Be careful and bring extra terminal tackle. There does seem to be less overall obstructions in the water than at the marina pier. Across the water is Kimball Island and the Sherman Island Waterfowl Management Area. 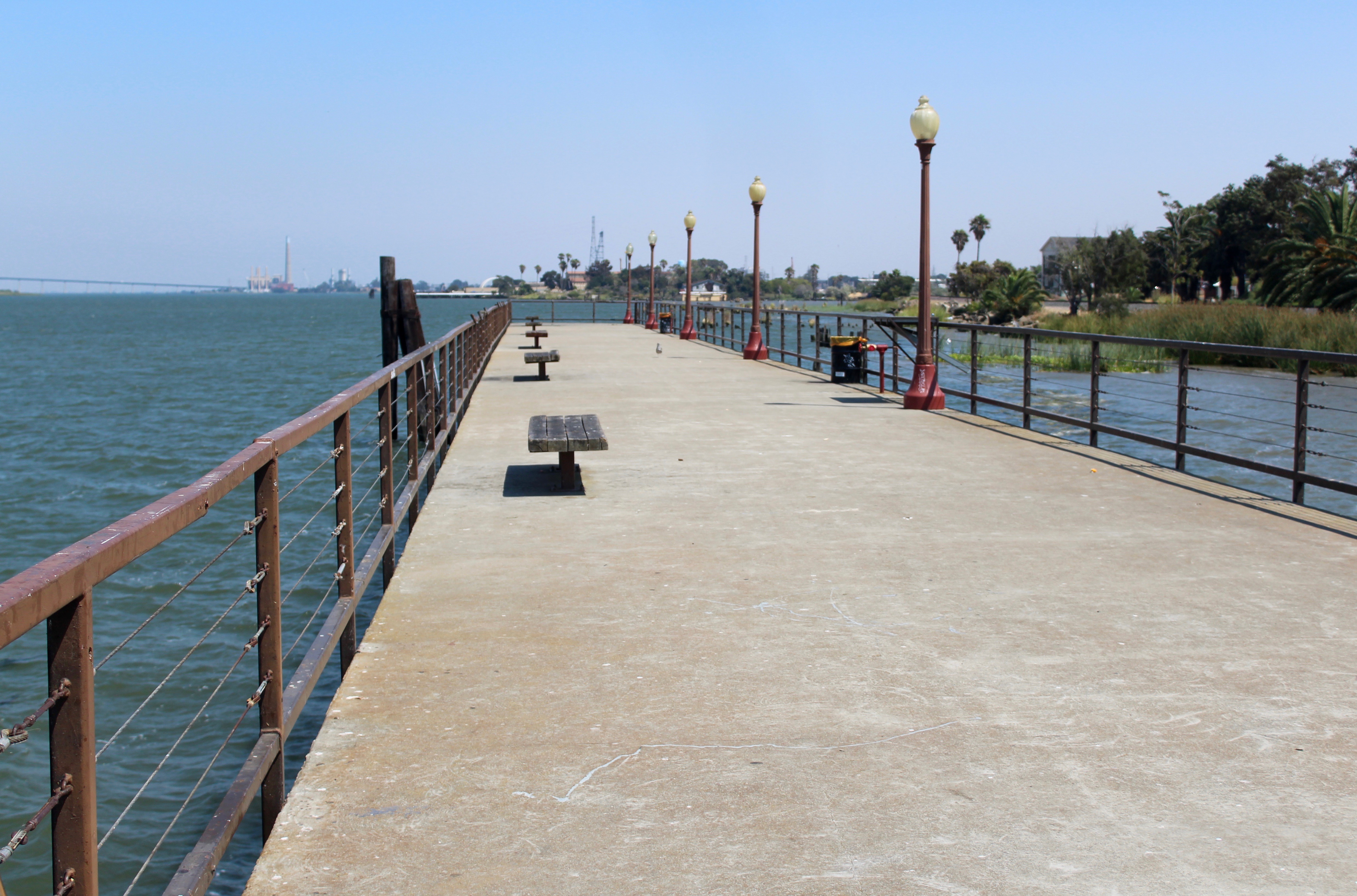 Species here are mainly anadromous (striped bass, white sturgeon, and green sturgeon), or freshwater (largemouth bass, channel and white catfish, carp and pikeminnow aka squawfish. A few starry flounder will also be encountered each winter and spring but most anglers basically fish for striped bass, sturgeon or catfish.

As with other piers in this area, freshwater species that live here year-round mingle with several species that enter and leave with the seasons. Thus large stripers are most common from the fall (October-November) to the spring (March); sturgeon like this area from late winter (February-March) to the late fall (November); salmon and shad will be seen passing through from the fall to winter months; a few steelhead will be seen each winter. Most other species, and small striped bass, are resident. 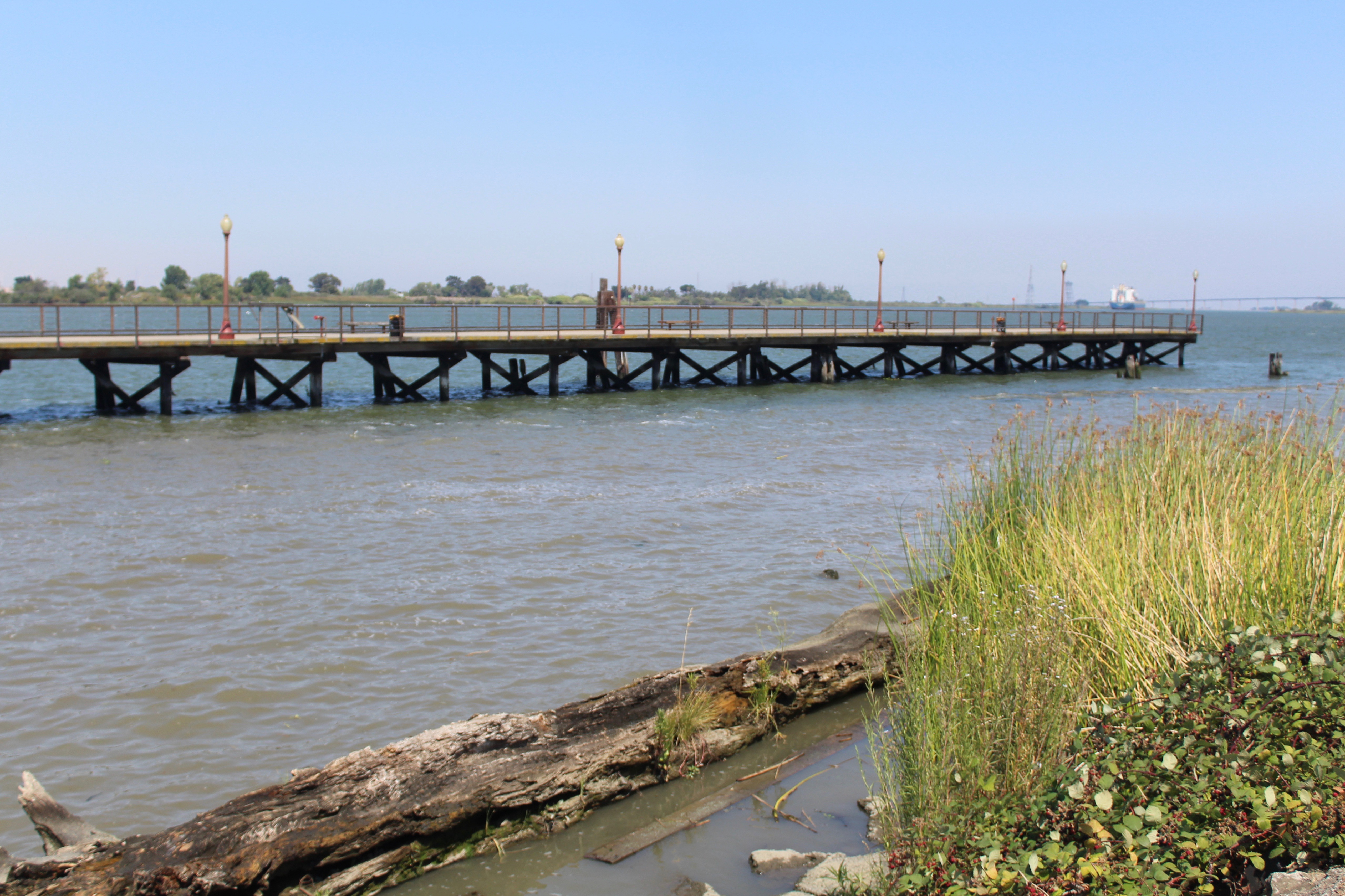 Fishing Tips. Anglers can concentrate on the larger species such as striped bass or sturgeon, or size down for smaller fish. One approach is to concentrate on large striped bass during the fall and winter months (with medium heavy tackle) and then either go heavy (for sturgeon) or light (the rest of the species) for the remainder of the year. Personally, I would go light for most of the spring through fall months unless I heard the sturgeon were really on the bite.

One problem you will encounter is a lot of undersized (under 18 inch) striped bass. Always return these fish to the water. Also, remember that smaller hooks can help insure the life of fish returned to the water. Studies show that fish caught on hooks, size 8 and smaller, have a much higher chance of survival than fish caught on larger hooks. So, even though the use of smaller hooks might mean that you hook more small fish, those that you do land should have a better survival rate. Of course, this isn’t practical when pursuing the larger stripers or sturgeon; but it will work on the rest of the species.

Remember that for the larger stripers you should use medium heavy tackle equipped with 20-30 pound test line and size 2 to 4/0 hooks. For bait, use cut anchovy, shad, or sardine. Secondary baits are grass shrimp, ghost shrimp and pile worms. All of these should be fished near the bottom, and most people will use a sliding leader that allows the fish to swallow the bait without feeling the sinker. Concentrate on these fish during the late fall to winter months. 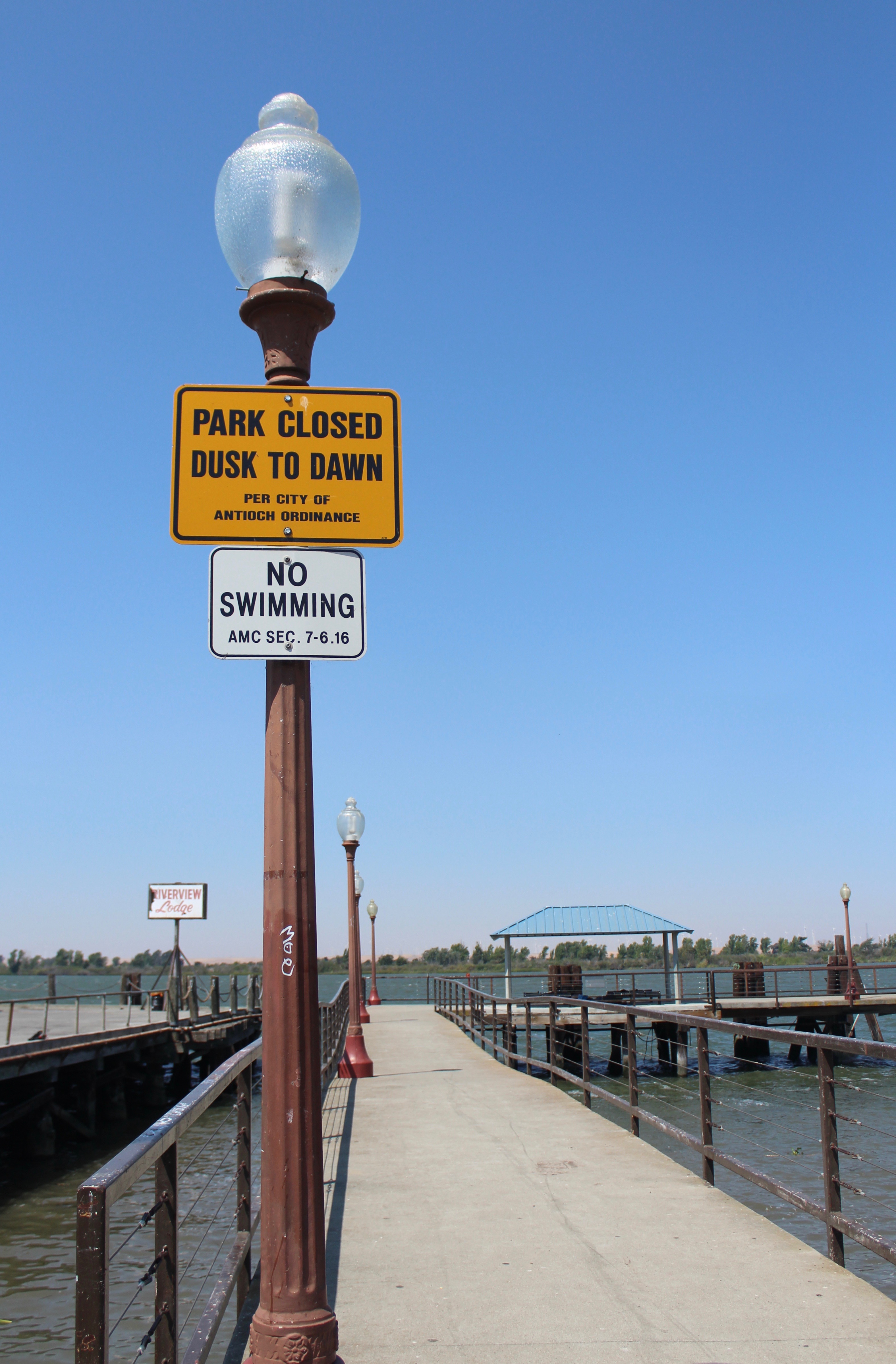 During the summer, concentrate on smaller species unless you’re a dyed-in-the-wool sturgeon fisherman. Try for catfish using oily/smelly cut bait—shad, anchovies, sardines, mackerel or other natural baits such as grass shrimp, pile worms or the little Delta black clams. If you want to get exotic try some of the prepared catfish baits or make up your own “stinky-dinky, blood-an-fixings, proven-to-attract-‘em stink bait.” Most of the catfish will be white catfish but you may also encounter channel catfish, together with brown, yellow, and black bullheads (primarily at night). Whatever you use to attract Mr. Whisker, keep only enough to eat—if you plan to eat them.

Another common species you will encounter is the much-maligned Sacramento pikeminnow formerly known as the Sacramento squawfish (even though most I have caught put up a pretty decent fight for their size). Unfortunately most aren’t too big (10-15”), although they can reach a larger size. Most of the pikeminnow I’ve caught inhaled pile worms and fairly small hooks.

Largemouth bass are also a possibility although not in the numbers you will catch in quieter waters of the Delta. If you want to try for them, and maybe even a few smallmouth, use live minnows or spinnerbaits in the inshore areas.

Other fish you may encounter include carp, both black and white crappie, and even a few starry flounder (in the winter or early spring). A few salmon and steelhead also swim through the area each fall and winter. For these, try artificials like spoons and spinners. 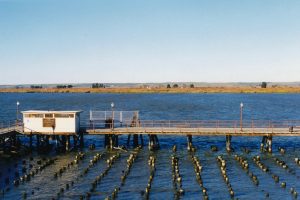 Before the recent renovation there were decrepit restrooms and a lot of pilings inshore.

Antioch, Oct. 27.—Bud Leonard, member of the Antioch Sportsman’s Club, today laid claim to catching the largest fish in history in local waters. Fishing from the Antioch Wharf yesterday, Leonard hooked onto a sturgeon, which, after nearly two hours’ fight, was landed and found to weigh more than 250 pounds. While the fish flopped on the dock, pictures were taken, and it then was thrown back into the river, as sturgeon are out of season at this time. 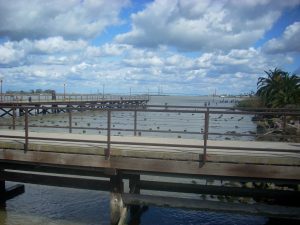 <*}}}}}}}}}>< —To the left of the pier sits the Riverview Lodge, a restaurant place that has been in its current location since 1948. It’s an old-fashioned kind of fish restaurant and bar that serves a variety of seafood, much of it fried, but it’s also a place where you can get dishes prepared in several styles including Newberg, Thermador, Au Gratin, Curried, and Creole. It’s not upscale, nor will it win too many awards for its food or service (according to Yelp) but I have always had good food and service— and it’s a place old-timers like myself like to visit. It’s also one of the few restaurants where you can get (white) sturgeon. I first had it at the restaurant sometime in the ’70s and my most recent visit in 2018 saw me order it again (and it  was still very good).

Special Recommendations. (1) This is a windy area so always bring along warm clothing. (2) Remember to bring a freshwater fishing license. (3) Throw back most of your catch. The state recommends that you eat no more than four meals per month of any striped bass from this region — because of elevated mercury levels in their flesh. And, women who are pregnant, nursing mothers, and children under six shouldn’t eat fish from the delta. A pretty sad tale for the Delta.

History Note. In July of 1849, twin brothers, Joseph Horton Smith and William Wiggin Smith, arrived in San Francisco from Boston on the brig Forest. A few days later they were able to get jobs at New York of the Pacific (today’s Pittsburg) and shortly thereafter acquired land north of that site to build their own landing— Smith’s Landing. At a picnic on the Fourth of July, 1851, a by-now larger group of citizens chose the Biblical name of Antioch for the settlement. The local wharves, including the Antioch Municipal Wharf, remained centers of economic activity well into the 20th Century.

The following is used with permission of Hal Schell who “was” the expert on the Delta. He once asked for some advice on the Pittsburg-Antioch piers but in reality my knowledge of the piers paled in comparison to his knowledge of the entire Delta area; we kidded that while I was a true “pier rat,” he was the ultimate “river rat.” Hal passed away in 2006 and will be much missed by those who love the Delta. Hal reported: “The late Uril “Compy” Compomizzo was an inveterate fisherman who spent his later years helping youth discover the joys of fishing. His motto was, Get Hooked On Fishing, Not Drugs. Compy waged a major fundraising campaign and raised big bucks to have the bottom of the river at the pier cleaned of everything from refrigerators to old boats, to make it snag free. On Jul. 4, 2000, a plaque & monument dedicated in his name was posted at the Pier and it was renamed the U.E. “Compy” Compomizzmo Municipal Fishing Pier. There was a parade with Compy as “Grand Marshall.” Every year in April, the West Delta Chapter of the CSBA and other organizations stage the free Compy’s Memorial Kid’s Fishing Derby at the pier.“

Hours: Supposedly open 24 hours a day although the sign on the pole near the entrance to the pier says the “park” is closed dusk to dawn.

Facilities: Lights and a fish cleaning station are located on the pier. Free parking is a short walk up the hill from the front of the pier. There are two different official parking lots for pier parking, each around 400 feet from the pier. The pier is part of the Historic River Town District so there is parking in Waldie Plaza at First and I Streets or at Second Street behind the Casino Special Shops. The Second Street location overlooks the San Joaquin River. Do not park in the parking lot adjacent to the pier, it is private and reserved for the River View Restaurant. I imagine though if you were to go over, have a snack (aka spend a little money) and ask them if it’s OK to park in their lot they wouldn’t object.

How To Get There: The pier is located at the foot of H Street in downtown Antioch. From Highway 4, go north on G. Street; follow it to Second Street where you will turn left; follow Second Street about a block to the free public parking lot near the Jerome Waldie Plaza or the Second Street parking. A short walk down the hill will take you to the foot of the pier.