Identification: Deep, stout body with a steep porofile. Spinous dorsal higher than soft rays; spines on head small. Pale-brown, tan or olive-brown on back with flesh-colored or whitish spotting and blotches; darker rays radiate from eyes

Habitat: Gopher rockfish typically inhabit bethnic environments 30-240 feet deep. They occupy rocky habitat at the base of kelp beds and though they will share reefs with other rockfish (especially kelp, blue and olive), they are territorial, defending their home territory and keeping other rockfish out of their bottom territories. Gopher rockfish are considered to be nocturnal and generalist predators that like to spend daytime hours in holes and crevices, emerging at dusk to dine. While the diet of juvenile gopher rockfish includes crustacean zooplanktors, adult diets include invertebrates such as cephalopods, gatropods, opiuroids (brittle stars), Cancer crabs, porcelain crabs, spider crabs, shrimp and polychaete worms. Small fish consumed by gopher rockfish include juvenile rockfish (mainly blue rockfish), sculpins, juvenile surfperch, kelpfishes, and plainfin midshipman.

Piers: Smallish-sized gophers are sometimes taken from piers but most adults migrate to moderately deep waters. Best bets: Mporro Bay South T-Pier, Monterey Coast Guard Pier and Santa Cruz Wharf. One specimen was reported from the Crystal Pier but it may have been a brown rockfish. 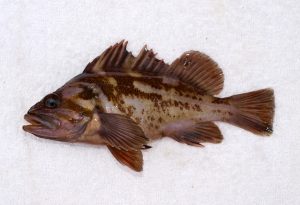 Boats: A common catch for boaters and kayakers from Santa Barbara north to Monterey Bay.

Bait and Tackle: Cut bait, squid, and shrimp fished with a #1 or #2 hook is usually all that is required.

Food Value: An excellent eating, mild-flavored fish that can be cooked in mny ways.

Comments: Gopher rockfish are very closely related to black-and-yellow rockfish   and though distinct in coloring, they may be the same species. Typical age of maturity is 3-4 years old when the fish are about 5 inches in length. Can live to about 30 years of age.