Identification: Easily identified by 5-7 dark red or brownish red bars and mottling over a grayish-brown body; bars extend onto the fins. Body can be darker colored and sometimes white-spotted depending upon habitat. Three dark bands radiate from the eye with two red cirri (flaps) on head, one above the eye and the second midway from eye to dorsal fin. Dark spots are found on the caudal, pectoral, and pelvic fins. Elongate pointed head and snout.

Size: To 10 inches although most seen from piers are 6-8 inches long.

Habitat: Typically found in shallow-water rocky areas. Recorded from intertidal pools to a depth of 738 feet. In southern California they’re more common from 50-100 feet in depth. Their typical diet includes small crabs, shrimp and amphipods. They tend to sleep at night and shelter in holes during the rough weather, winter months. 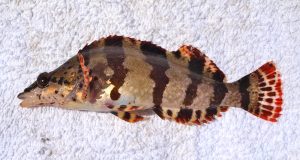 Shoreline: An infrequent catch for rocky shore anglers in southern and central California.

Bait and Tackle: Most are caught accidentally by people using light line and small, size 8-6 hooks. Instead of large bait, pile worms, strips of fresh mussels, and strips of squid work best.

Food Value: Too pretty and too small to keep. Let ‘em go!

Comments: An exasperating fish that will often hang vertically on the face of steep rocks while checking out the scene—especially if the scene includes food, i.e., bait. Eventually, if they like what they see, they may begin to cautiously peck at the bait and continue to do so over an extended period of time without getting hooked. Perhaps a close second to ; sea robbins by some early SoCal fishermen. in bait stealing ability. This is another of those small fish with seemingly a Napoleonic-complex. They’re fairly aggressive and not only will they attack fish bigger than themselves but males guarding eggs have even been known to attack skindivers. It wasn’t much of a fight though, 8-inch fish versus 70-inch human. These are very interesting fish for the aquarium.