This pier was a virtual copy of the Ravenswood Pier to the west, although it is still open, unlike its sister pier that is now history. The similarity was to be expected since this pier, for the most part, is the east end of the old Dumbarton Bridge while the Ravenswood Pier was the western end. It does, however, offer additional resources: the Visitor’s Center and the headquarters of the Don Edwards San Francisco Bay National Wildlife Refuge are located on the way to the pier. It is a good place to stop and get an understanding of the complex environmental factors that play a part in both the health of the bay and the fishery that depends on that health. 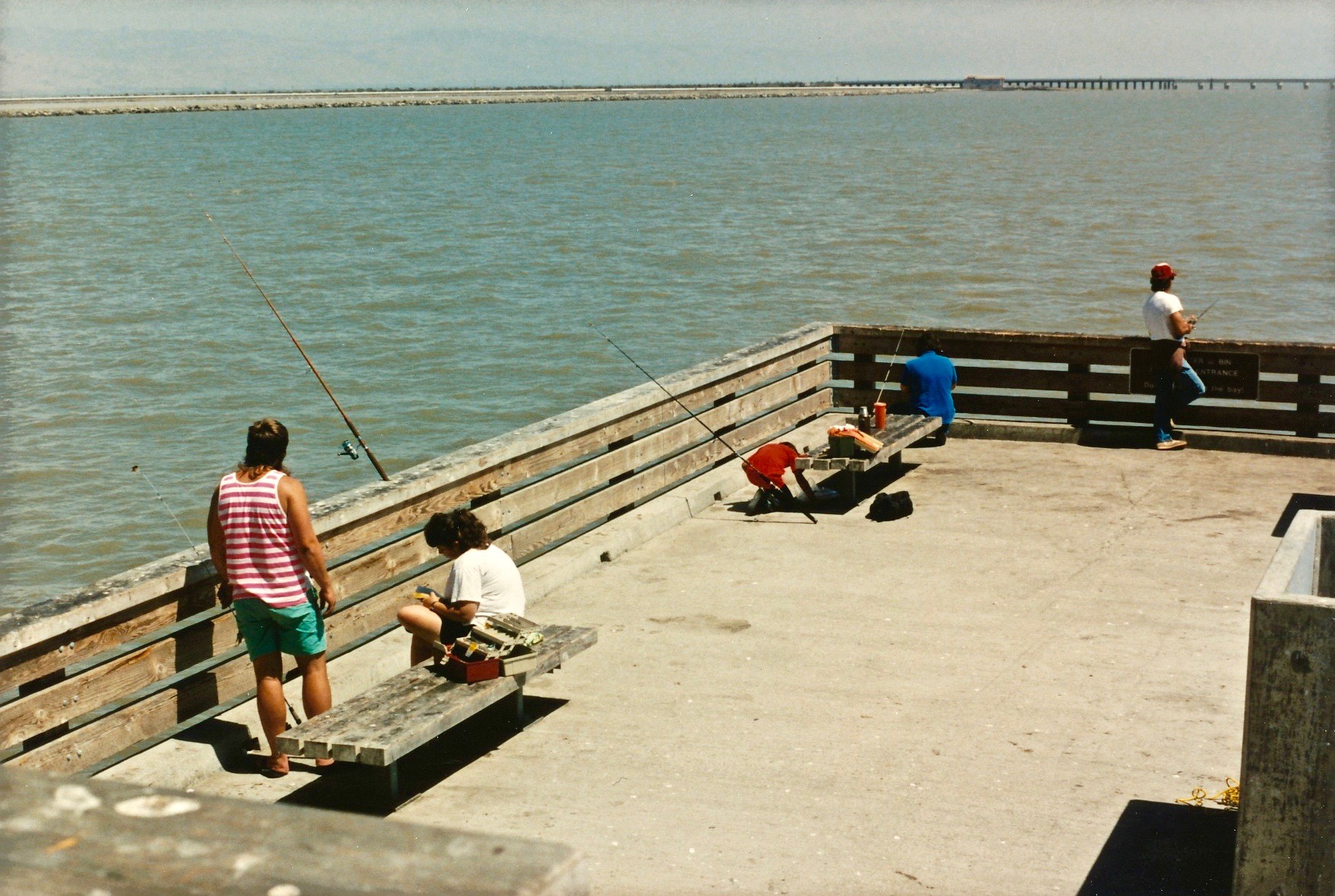 Environment. Because of the environment found here, this pier often only offers fair fishing along much of its length. The bottom is mud and inshore waters are shallow; during really low tides the angler can be staring out at a mud flat, a fact that usually isn’t too conducive to fishing. In addition, salinity levels of the water are higher than in the central and more northern reaches of the bay. The result is that at certain times of the year there are  less fish species and fish here than in some other areas of the bay. When there are less fish, less fish will be caught. Winter and spring see a more normal mix of water and usually more of a variety of fish. 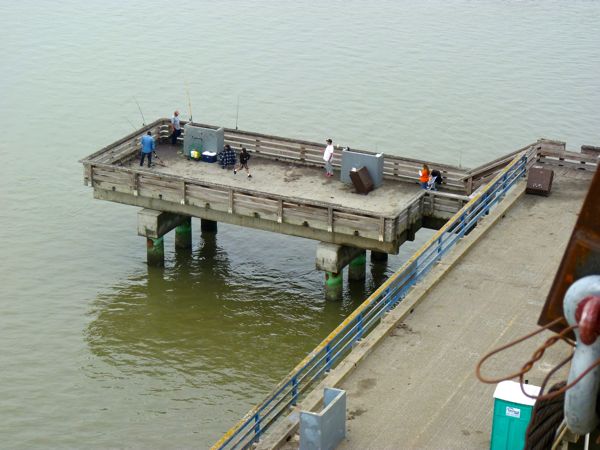 Perch and flounder can be caught in the shallower waters, as can some striped bass and bat rays, but most of the bass, sharks, rays, and especially the sturgeon, will be landed out at the end of the pier in the deepest water.

It is during the winter and early spring months that you’ll have the best luck for perch, jacksmelt and starry flounder. Winter and spring are also the times when most of the white sturgeon are caught, and several have been landed at the pier that exceeded 100 pounds in size. Action in the summer and fall centers on striped bass, sharks and bat rays with an occasional school of kingfish or perch moving through and offering a diversion to the big-game hunters. 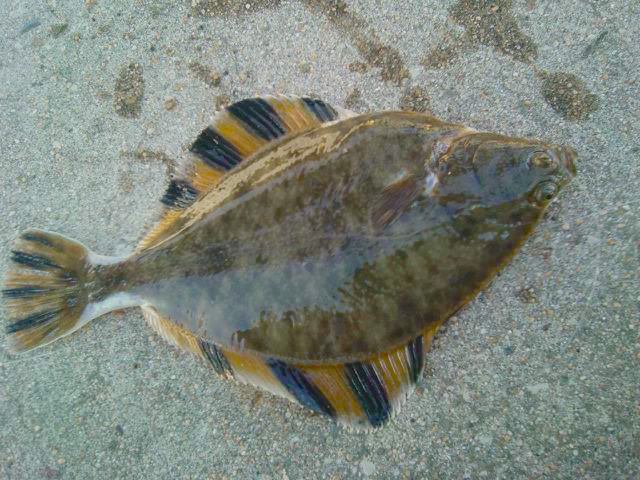 Several different varieties of shark are landed here but, as usual at South Bay piers, the vast majority of the sharks are small sand sharks (brown smoothhounds). Second in number will be the more highly esteemed leopard sharks, a fish that reaches good size, fights well, and is delicious on the dinner table. Most years will also see at least a few sevengill sharks caught. Although most of these sevengill sharks will be far less than their maximum nine-foot size, they often approach or exceed four to five feet in length, a good size for a pier-caught fish (although the spring can see many small 18” pups showing up). Completing the sharay mix are, as expected in SF Bay, are quite a few bat rays and an occasional skate, usually a big skate.

In the summer of ’04 a 44” shovelnose shark (guitarfish) was an unusual prize at the pier while September 2005 saw a 38” shovelnose. What the normally SoCal residents were doing this far north is anyone’s guess although there have been increasing numbers reported in SF Bay during the past decade.

If an angler has luck on his or her side, a striped bass will be the prize. Best bet for these will be in September or October and live or dead bullheads (as long as they still have their slime) are usually the preferred bait.

Fishing Tips. Fish this pier in the winter and early spring for a variety of perch: pileperch, black seaperch, redtail surfperch, and white seaperch. Use small hooks, size 6 or 4 and either pile worms, small pieces of shrimp, or clams for bait. Be sure to keep the bait near the bottom. During the fall try for silver or walleye surfperch using pieces of anchovy while fishing the mid-depth areas under the pier. During the summer to early fall try cut anchovies on the bottom using a high/low leader for kingfish (white croaker) and an occasional flatfish. Pray to the gods to keep the bullheads, a.k.a. the “little pests” and “dumb #**@~!!s”  away from your bait.

During winter and spring you might encounter a starry flounder on the bottom in shallow waters or out to the end (although they seem to decrease in number each year). They prefer pile worms or bloodworms but will also take cut anchovies, grass shrimp, or pieces of clam. Use a fish finder/ Carolina-type rigging for them with just enough weight to hold bottom.

The issue of sinkers and weight is even more important when you move out to the end. Currents can be strong here and sometimes even a 6-8 ounce sinker will fail to hold bottom. Be sure to use a pyramid, dollar or spider sinker and the latter, which has copper legs that bite into the mud is probably the best when currents are really strong 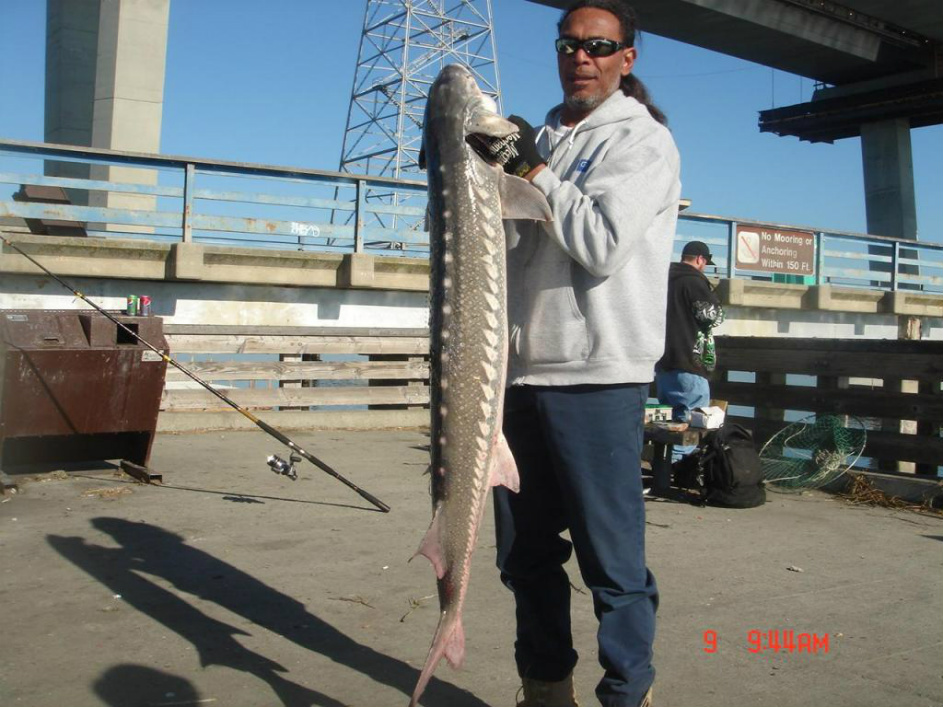 Winter to spring are also the prime months for sturgeon, primarily white sturgeon, and they are the trophy fish at the pier. As mentioned sturgeon exceeding a hundred pounds in weight have been landed here (although such a fish would need to be released today given the maximum length restrictions).  Prime baits for the sturgeon are ghost shrimp, mud shrimp or grass shrimp although they’re bottom slurpers and have been known to almost anything they could suck up into their mouth. Be sure to keep the bait near the bottom using a fish-finder rigging and be ready for the slightest nod of the rod. Their light bite is somewhat amazing given their size. Be read!

The summer to fall months are the best time for sharks although some will be caught year round. Use cut bait—oily anchovies or sardines, bloody mackerel, or squid. Better yet for the larger sharks is live bait—shinerperch, midshipmen, mudsucker (longjaw goby) or bullhead (staghorn sculpin). Unfortunately, the pier is not open at night, which is the best time to catch sharks.

The same location and times are best for the bat rays and skates (with about a hundred bat rays to every skate). Use the same fish-finder rigging or a high/low rigging for the rays but switch to squid as the best bait (although they too will hit a variety of baits). 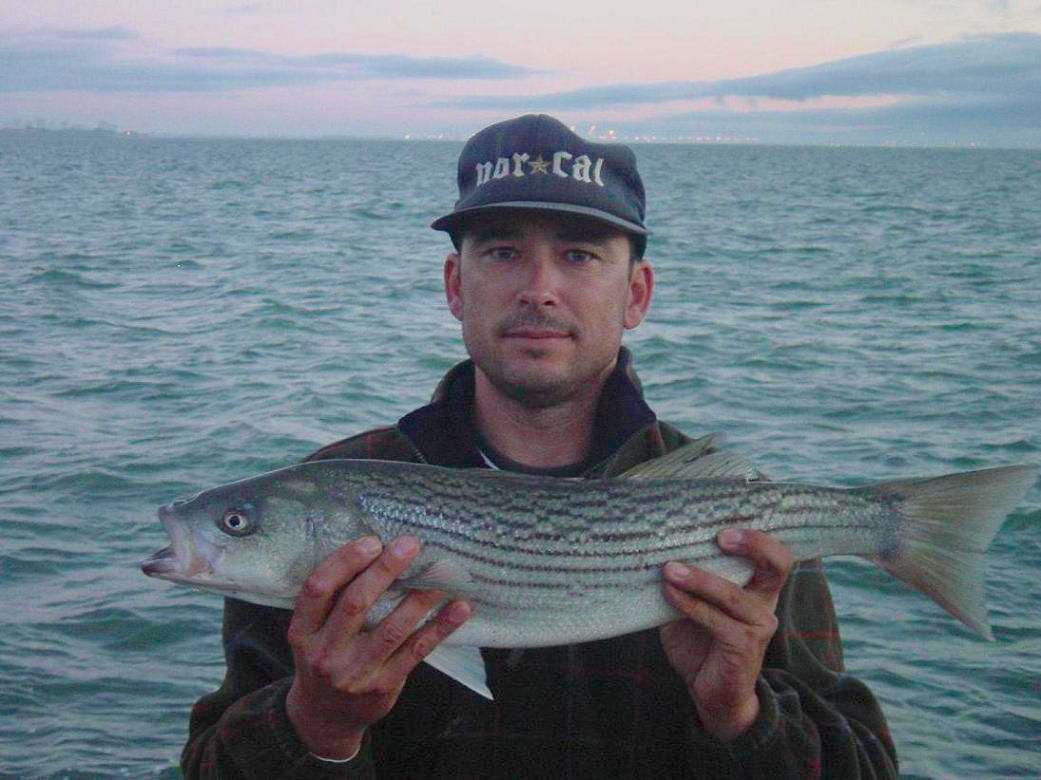 Spring to Fall but especially September and October offer the best shots for striped bass (and some big ‘uns have been landed here). Try on the bottom using pile worms, ghost shrimp, anchovies, sardines and live baits—bullheads or mudsuckers. Also, don’t be afraid to try artificials for the bass although traditionally few have been caught on lures at the pier; although it may be due more to the lack of effort on the part of anglers rather than artificials not working.

Remember to bring a net for the sturgeon, stripers and leopard sharks. Use a treblehook-gaff if you must for the large sharks, bat rays, and big skates but ONLY if you intend to keep them. 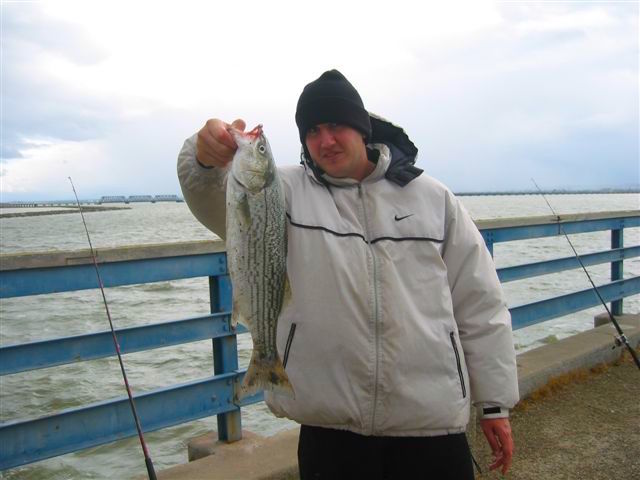 <*}}}}}}}}}>< — There was a time when the road to the pier was closed from April 1 to August 31, a fact that made fishing just a little iffy. One day I stopped by to ask why. “Da Birds Made Us Do It!” That seemed to be the answer given by the friendly young lady at the reception desk at the Don Edwards San Francisco Bay National Wildlife Refuge Visitor Center. Seems that the western snowy plover, an endangered species, nested and laid eggs near the road leading to the pier. Shortly thereafter, the newly-hatched youngsters would begin to wander onto the road surface, where their gray and white feathers blended into the asphalt, making it difficult to spot them from a car. Since scrambled snowy plover eggs (as well as flattened chicks) were a definite no no, anglers were restricted in their ability to use the pier during those five months of the year. The closures during the prime July-August times for sharks made more than a few anglers unhappy but it made sense if it was needed for “da birds.” I reported the closures and simply said “that’s life in the New Millennium.”

The closures are no longer in effect. In fact, they stopped about 2008 when new habitat areas for the snowy plover were created in other parts of the refuge. Unfortunately old information seems to exist on the Internet but hopefully it eventually will disappear. In the meantime, good job by all at the refuge!

Hey Ken! FILTH FLARN FILTH, I’ve been skunked at Dumbarton Pier!  On a brighter note, the regular pier rats reported last week and the week before that sturgeon and striped bass were biting like crazy. Well you and I both know how a pier rat can stretch a tale or two (no pun intended). Well, I was talking with the game warden, and he showed me pictures of these beasts that were caught out there a week ago and before that. WOW, the pier rats are not lying! Huge sturgeon, striped bass, and even a gigantic leopard shark. This place is hot!

I’ve been going to Dumbarton Pier the past couple of days and the sturgeon bite has been fair. I saw a guy hook a sturgeon and with one jump snap the line. A lot of big leopard sharks have been caught on herring, anchovies and squid. I saw a big sevengill shark caught on a whole squid and a couple of stripers have been caught. In about 1 to 2 weeks they (stripers) will be in and when the rain comes the sturgeon bite will take off. Use herring for the sturgeon, use squid and anchovies for stingrays and sharks, and use pieces of anchovies and shrimp for the stripers,

I’ve fished this pier for over 10 years. The end is best for shark and sturgeon. Closer to shore is good for perch, stripers, and stingrays. I fished at the end today

Stripers do go all the way down to Dumbarton, but they are a rare catch there. Best month here is mid-October. The pier covers a lot of water, and I’ve seen and caught stripers near shore, in the middle, and a few on the end. Most stripers are caught from shore to midway out. Use grass shrimp or anchovies. Bullheads work okay too. It isn’t crazy like Pacifica at all and the Fish and Game frequent here a lot since it’s easy for them to drive their truck on the pier. I’ve seen a lot of people busted here (they actually sit on Dumbarton Bridge with binoculars on their atv’s.) DO NOT FISH WITH MORE THAN TWO POLES OR KEEP UNDERSIZED FISH. All the stripers I HAVE caught here have been on the bottom. Use a slider or a high low rig but they hit the bottom hook 90% of the time. I fish here a lot because I live really close by, but I wouldn’t recommend this pier to some who live far away. Some days can be VERY SLOW and all you catch are baby sharks.