I walked down the steps. Had the other rod in my hands, then my bell rang. I looked up. The rod tip bent down really hard and jerked back up. The bell went nuts for a second. Then nothing… I ran up stairs and held the rod for a minute. Nothing, so I reeled in, and the shrimp on top was gone. I re-baited and re-cast to the same position. This time I loosened the drag on the rod, just in case something big hauled the rod over the edge.

I went back downstairs and quickly reeled in the other line, re-baited, and jogged upstairs and walked along the pier and cast toward a second caisson. As I lay the second rod down, my cell phone rang. It was my friend. Says he’ll be there in 5 minutes. I tried to warn him about the first speed bump on the road and to not go over 35. I was going around 45 mph and man… caught some air and come down hard. Definitely not good for the suspension on my truck. I was asking about whether he had brought his rod and just chatting, when the bell on the first rod goes off again.

“What, you gotta fish?” he asked again.

“I gotta go now…BYE!” I shouted and hung up.

I rushed to the rod, picked it up, and with a lot of power, whipped the rod back over my shoulder…. whizzzzzzzz….. DoH! The drag spun. I had forgotten that I loosened the drag on the reel before. I quickly tightened the drag and reeled the slack in and tried to set it again. But whatever hit swam out into the current and around the caisson. I ran to my right about 50 feet to get a better angle on the line and to maintain tension. I lifted the rod in a doubled-over position for about 5 seconds and then, snap! It was gone…

I reeled in the main line and there was nothing. No sinker. No hooks. Just the line, somewhat abraided by the sharp barnacles on the caisson.

My friend showed up about 10 minutes later. He jogged all the way down the pier. Just t-shirt and shorts. No rod. No reel. No grass shrimp. I had just finished rigging up again and was preparing to cast again. I tossed the bait back against the caisson. We waited for some time, but there was no more action. I don’t know whether my buddy cursed the fishing by his presence or the one that got away warned every other fish, but the bites just stopped. I’ll never know what it was. We ended up fishing another 20 minutes, until 7:30pm and had to pack up and leave before the gate closure at 8pm.

That was my first outing to Dumbarton. Now I see why people like it. I’ll need to head back soon. But this time, with less distractions. – Gyozadude,  “Yes – I can roll my own potsticker skins” 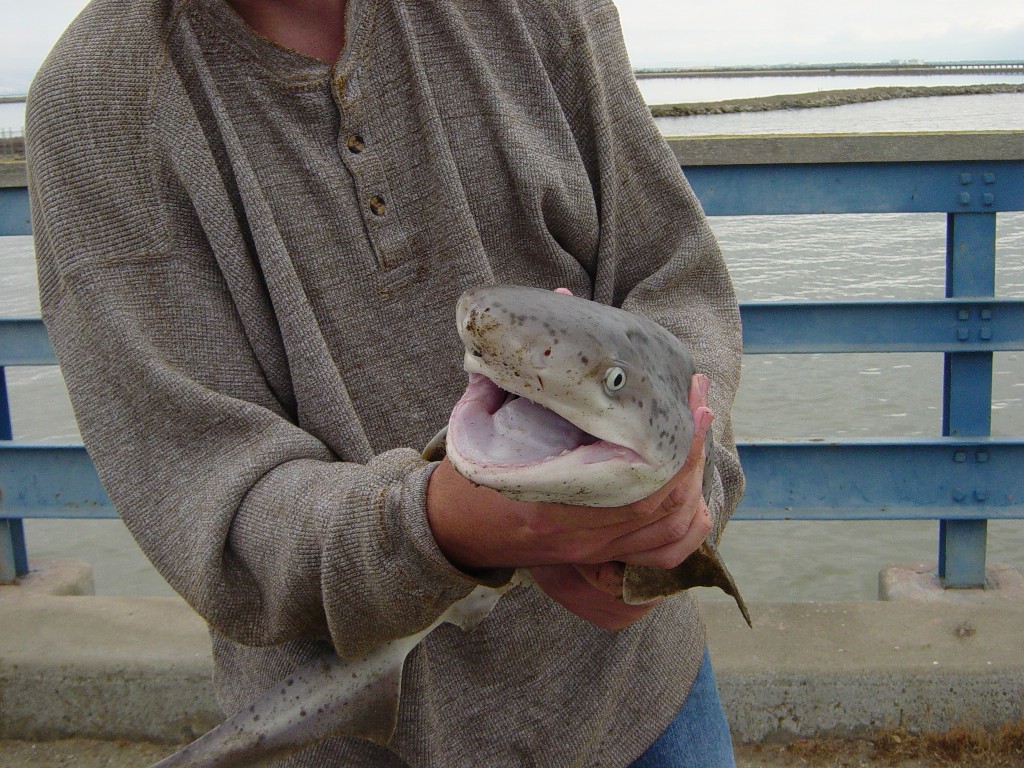 Good stuff. I think 8-oz. weights are the average sinkers used out there to hold bottom. I use “sputnik”-type sinkers nowadays. Since I started using them, nothing but positive performance. Kind of pricey, but I think they’re worth it and definitely recommend for others to check ‘em out. Pretty long post to read at 4 in the morning, but cool story.

Gyozadude — Great story seems like you had fun. Next time eh? The surf rods you were talking about in the past that you wondered if you would have use of, rig em up. They will hold an 8-oz. well. Use a slider for no tangles. If the current is going out (north towards San Mateo) and you are having a problem with staying down fish the top section of the pier casting north (usually into the wind) and your line will stay straight. Same goes for the incoming on the bottom section of the pier. When the pier gets busy you practically have to fish an 8-oz. or you will get some dirty looks as your line drifts over everyone else’s. If everyone uses an 8-oz. pyramid all the lines will fall into place. Ghost, grass shrimp, and herring are my preferred baits that generate a lot of action on the sharks, rays, and sturgeon. You think that current was bad? That wasn’t nothing, wait until a minus tide to a 6-footer. Sturgeon seem to like those tides though. All the fish mentioned above will feed in the middle of that current; they will be swimming with that tide and chewing your bait along the way. Hope this helps you for your next trip. And for safety, I’ve fished there I don’t know how many times by myself and not had any problems. Not that it can’t occur but hopefully this will help ease your worries.  Jason “Bayrunner”

Jason is right on the money. Luckily I listened to his and Carlo’s suggestions before the first time I went out there or I would never have held bottom. Dumbarton is definitely a nice pier with plenty of different fish to catch. Nufo

Will bring heavier equipment. I’m jazzed about Dumbarton. There’s plenty of structure for fish to congregate around. I’m planning to hit that more often. I was using a 9′ Daiwa, el cheapo Eliminator yesterday. The 15-footer is still in the garage rafters. I might haul that out too. I have a spare Daiwa Jupiter Z 6000 reel that I’ve never used but got as a gift. How far do you guys cast out there and what pound test? I was using #2 hooks on my rig. The acceleration of trying to cast farther than say 50 yards knocks the bait off. And if I don’t worry about the bait and practice casting, the weight really stresses the line a bit. I’m fairly certain I need a 50-lb shock leader of sorts. I’m hoping smaller grass shrimp hang on better than the shrimp I used, or that I don’t need to cast that far. If the fish are closer to the pier, I’d prefer to bring a 6’4″ boat rod with a conventional reel and just toss the bait around 30 or 40 ft. – Gyozadude, “Yes – I can roll my own potsticker skins”

It appears that the farther into the channel you cast the better. Try a nice smooth fluid cast. Any type of jerking action and you will lose your bait. Also try Spider thread to tie on your bait. If you’re not familiar with it, it is an elastic thread that works 100 times better than magic thread. A shock leader is defiantly a good Idea. Try 50-lb mono or even heavier braid. As for main line I use 20-lb big game. I noticed a lot of guys out there using very heavy braided line. Connect your leader to your main line with an Albright knot. I have found that if you are not getting in or near the channel you will mostly catch little leopards and sand sharks. But then again it depends which direction you are casting too. I’m sure Jason and Carlos can tell you more about where to cast. Nufo

Try using some Magic String to keep the bait on the hook… also, most of the sturgeon guys on the pier use a superline. When the current is really strong they use 10-oz pyramids… hope I see some of you out there.

The grass is always greener out farther right? hehe. As far as where to cast — on the upper platform, facing San Mateo. I throw one directly in the middle of the auto bridge pillars as far out as I can. The 2nd rod gets tossed as far as I can toss it on the farthest auto bridge pillar close to it, (I believe the spot you said you threw it when you got a hit?) on the bottom corner one straight out and one angled a little towards the silver house on the train trestle east of the swing section. Line you could go a couple ways, mono 25-30 or braided 50-100-lb. if you like. I go with the braid more there just because when it gets busy a lot of people are using that and if you tangle up with your mono it’ll cut right through it. Power Pro is probably my brand of choice along with P-Line CXXtra for the mono. Use some Magic String and your bait shouldn’t fling off. For hooks I go 8/0 octopus for everything with no problem even the small sharks will inhale that hook. That’s dramatically bigger than you have now and some might say it’s too big but there are many reasons I use that big of a hook. Good luck. All this talk I’m leaving work and going to the pier right now. Maybe some stripers hanging around there too. Don’t forget about them too, I’ve gotten a lot off the pier around these months through the fall. Jason “bayrunner” 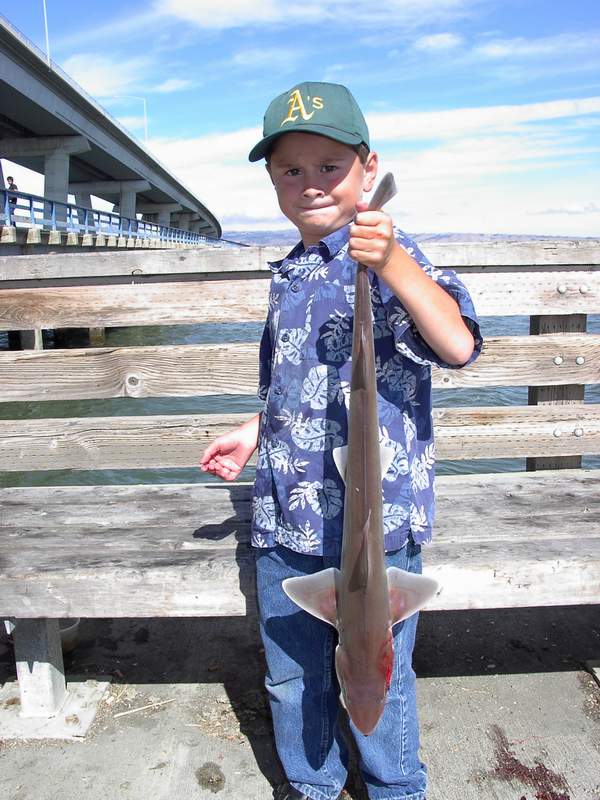 From my brief experience with the Dumbarton pier, I fished just the crest of the tide slightly going out. This generated tremendous currents. I believe that the wind is a major contributor. Because the liquid of the bay is contained within a fixed geological volume, any kinetic energy imparted on the surface is going to generate some circulation. If the water is too shallow, the wind just whips the surface which results in splatter and foam formation.

If the water is deep enough, however, like 10 feet or more. Then the wind can generate a tremendous undertow at the bottom by driving large-scale circulation in the bay. And because the depth isn’t too great (like 500 feet), the circulation builds up in just minutes and not hours or days. It’s great for rapidly flushing out the bay and redistributing microbes and baitfish. But it can be deadly when coupled by an outgoing tide for someone in a float tube.

Although Jason states that they catch fish in fast moving current at Dumbarton on bottom rigs, I’m fairly certain that there must be a number of conditions being met. The bait must be residing in a position where there is a path of low flow resistance. This may mean structure (like a bridge caisson), or that the bait is in a small dip or channel on the bay floor, which we can’t see. If there is a shelf, there will be a pocket of relatively still water right at the drop off.

The other option is to suspend in the shear layer, which should be slightly above mid-depth in the water on outgoing, and slightly below mid-depth on incoming tides assuming symmetric circulation. This may be a reason why you can see sturgeon jumping off the surface. Could this coincide with tidal and wind driven flows?

A large fish with that much surface area, even facing into the current, would have to expend tremendous power to hold position near the bottom. It is however, possible to stay -very- close in the boundary layer at the very bottom. But that layer is just a few inches thick. A big sturgeon’s back plates would have some drag in that case. Same with sharks. The only ones who could hold bottom would be the rays and skates. For all other fin fish, it’d be much easier swimming in the shear layer near mid-depth. Then you’d be attacking bait from above and not below, which would explain why a hi-lo rig works on species who wouldn’t otherwise hit a bait located above.

Something else, I couldn’t figure out. I was running a long leader initially when I got my bites. About 7 feet long. Two hooks high up. I got two hits. It was after losing the fish, I tied on a shorter leader…and hits stopped. hmmm… makes me wonder.