Shortly after posting a revision to the article on this pier I received a note from a PFIC member stating that the pier was now closed. No one seems to know why although from the posting notice it appears it’s unsafe. We will try to find out the story. 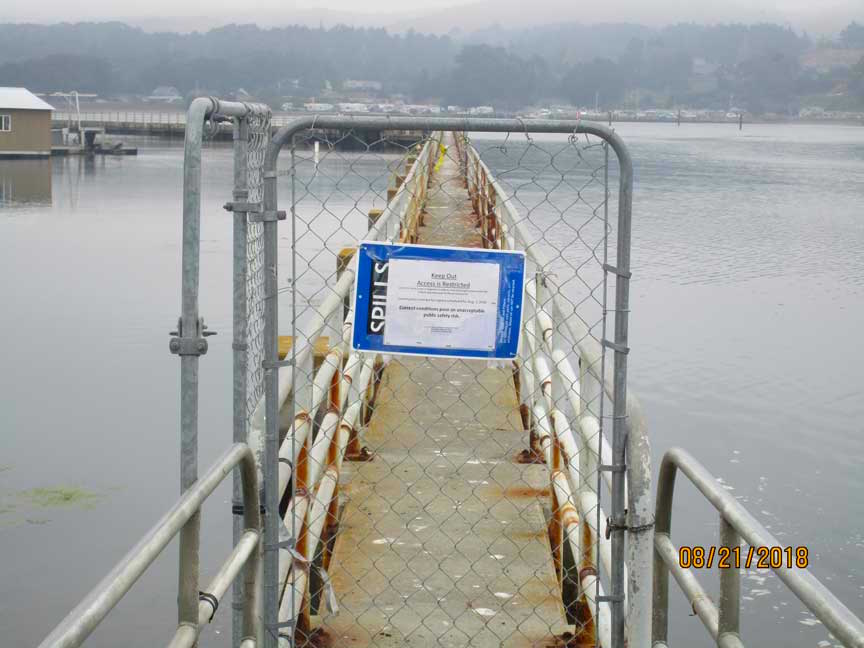 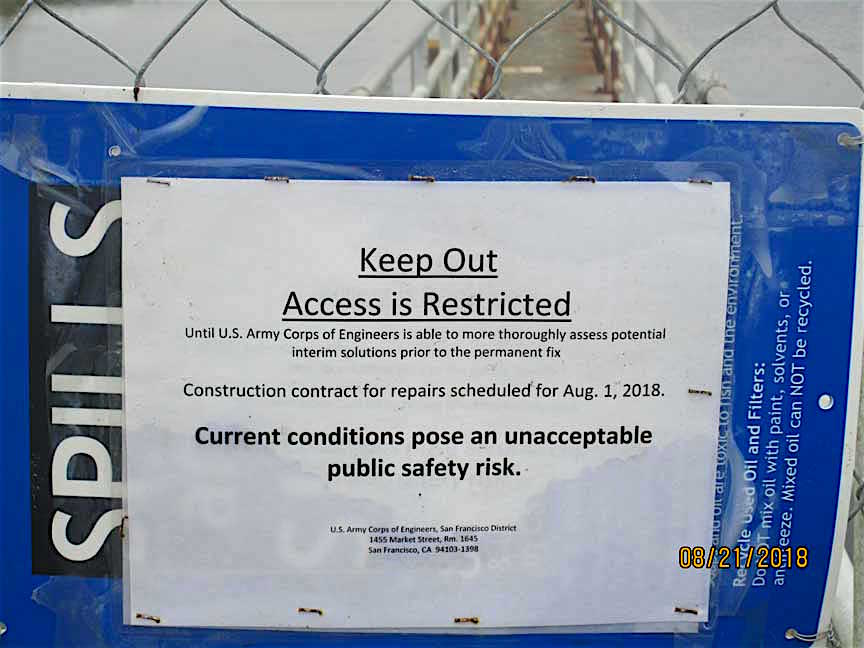 Until we find out the specifics, if and when it will reopen, I’ll leave the article as written.

Until the 1970s, Bodega Bay was the proverbial sleepy little fishing village. Sportsmen and commercial fishermen knew about the harbor but it was rarely crowded with the exception of holiday weekends. That changed by the mid-1980s. Bodega Bay became both a popular tourist destination and a home to more and more weekend residents. Along with this was the tremendous growth in Sonoma County itself. Increasingly, recreational facilities, including marinas and docking spaces, were inadequate.

To alleviate the problem, a new marina was constructed—the 244-slip Spud Point Marina. It is an excellent facility that is protected by a concrete breakwater that nearly surrounds the marina. Along the top of the breakwater is a narrow walkway, which has railings on both sides, and out toward the middle and end there are two slightly wider fishing platforms. Although the facility is technically not a pier (at least the way I normally see it), the area has become an increasingly favorite place to fish and yields quite a few fish. 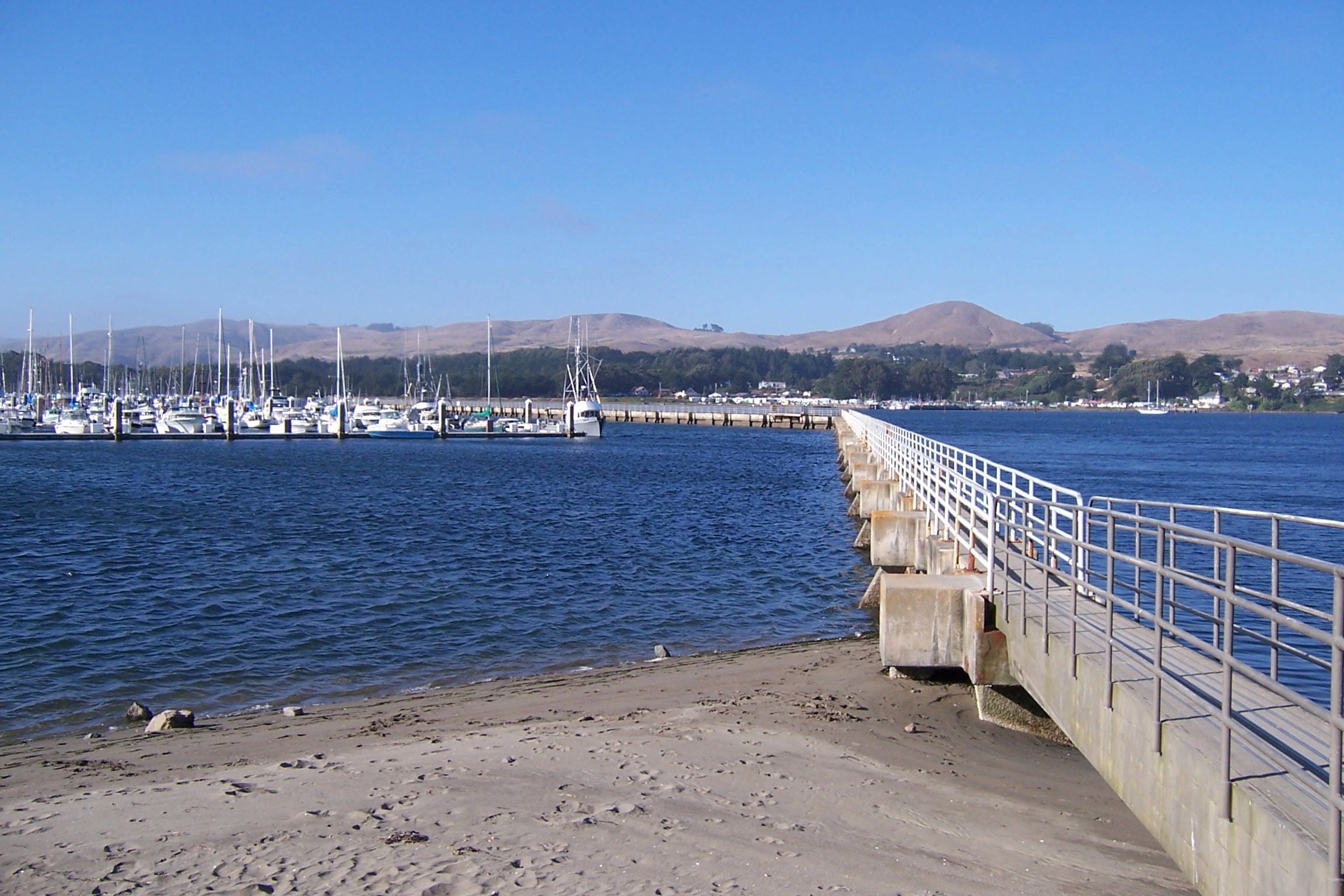 Unfortunately, many of the fish here are small which can be a nuisance. My first visit here was in the late spring, and I was seeking perch. In talking to a local fisherman, I had learned that anglers were having success catching large perch down around the inner-base of the wall. They were catching the perch (which he erroneously called rubberlip perch but which were really large pileperch), by using small hooks and small shore crabs for bait. Unfortunately, I was using pile worms and market shrimp for bait. But the angler was right! The pileperch were there, you could see the large fish swimming around, underneath the walkway, by the base of the breakwater. But the combination of small hooks and pile worms didn’t work. Shinerperch were present, masses of shinerperch, hundreds, perhaps thousands, of the small fish, and they prevented any of the larger fish from getting the bait. After a number of quick, multi-hookups of the small shiners, I switched to larger hooks and shrimp. But the pileperch wouldn’t hit the larger hooks or bait.

A later trip, in November, was very similar. Again, I had pile worms and again small fish were the norm, although this time it was small kelp perch. The kelp perch were larger than the shinerperch, but not by much, and all were returned. Although I did also catch a few medium size blackperch on the worms, I finally switched to fishing on the bottom for flatfish (or really whatever I could catch); but again I had little luck.

Finally, on the next trip, again during late spring, I made a point to capture a couple of dozen of the small crabs which seem to be under nearly every rock by the foot of the pier. Results were immediate as I caught a large striped seaperch, and then a pileperch, and finally a large rubberlip perch using the crabs. Since then I always catch a few of the crabs for bait. By the way, the best spot for the large perch (and some of these are really large) seems to be about one third to one half of the way out on the pier. This spot however is really only good for the perch; better overall fishing is probably out on one of the two fishing platforms. 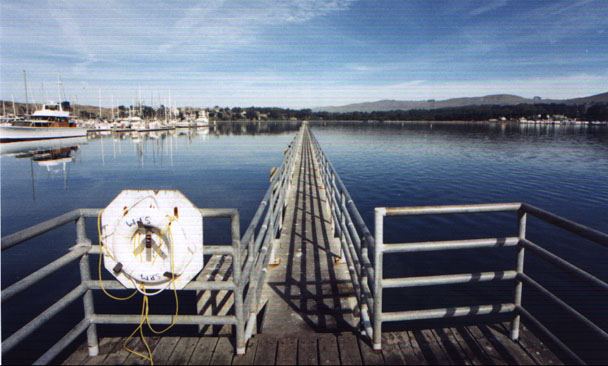 Environment. The pier is like that found at the Bayside Park Pier in San Diego Bay, and two piers in San Francisco Bay—the South Beach Harbor Marina Pier in San Francisco and the Emeryville Marina Pier. Each of these piers is basically a concrete breakwater designed to prevent waves from disturbing the boats in the marina. At each, someone with a little foresight also saw the possibility of using the breakwater as a pier. As such, conditions are somewhat different than that found at true piers. You do not have the normal pilings, nor do you seem to get the same effect from tides. Nevertheless, the calm, protected water can attract fish.

Water here is shallow with the exception of the main boat channels and even those are fairly shallow. The bottom is generally mud and on the outer side of the breakwater there is considerable grass and growth on the bottom. Inside the breakwater there is less grass, but still enough to tangle lines on occasion. The concrete wall is fairly void of growth, but there are some barnacles. The main fish caught here are perch, jacksmelt, and a few flatfish—flounder and sole. Although not really common, a few sharks and bat rays are also taken. More anglers seem to fish for the sharks and rays over at the Tide’s Wharf or Lucas Wharf.

The pier also seems to produce some red crabs and Dungeness crabs for those interested in the gnarly beasts.

Fish and Fishing Tips. Winter and spring are the best times for large perch with several varieties often schooling together at the same time. Most common are striped seaperch, rainbow seaperch, pileperch, blackperch, white seaperch, and a few rubberlip seaperch. For each of these, fresh mussel, ghost shrimp, market shrimp, pile worms, and shore crabs (especially for the pileperch and rubberlip perch) are the best baits. Since this pier is near the water, it is also a pier to try artificial lures.

The next most common fish are jacksmelt (and topsmelt) that generally swing around the outer end of the pier. For the jacksmelt, use three size 8 hooks baited with pile worms. Put a small sinker 18 inches under the bottom hook (to keep the line vertical), and put a large bobber or float 18 inches above the top hook.

Summer and fall are the best times for sharks and rays. Leopard sharks, brown smoothhound sharks and dogfish are common as are bat rays. Less common, but still a possibility, are big skates and Pacific angel sharks. All of these hit best on the bottom using squid as bait but the night is the best time for the sharks and few anglers seem to fish the breakwater at night. Thus, few sharks or rays are really seen.

Winter and spring are the best times for starry flounder, spring and summer the time for California halibut, and summer is the time for sand sole and sand dabs. All of these can be caught on the bottom using almost any bait but the bigger flounder and halibut are best caught on live bait with a sliding leader. The sole and sand dabs can be caught on a high/low leader using cut anchovy or pile worms as bait.

A few small rockfish and greenling will also enter the summer catch; most of the rockfish will be brown rockfish, but a few copper and grass rockfish will also be landed. As mentioned, the waters around the breakwater can be thick with small perch during the spring to fall months. The majority of these will be shinerperch, but there will also be considerable numbers of white seaperch and lesser numbers of walleye, silver and calico surfperch.

Crustaceans. For some anglers the crabs are the main attraction for the pier. Three types are found here, rock crabs, red (rock) crabs and Dungeness crabs. The first two, red (rock) crabs and rock crabs can be taken year round. The Dungeness have a more limited, roughly eight-month season that typically starts the first week in November and runs to June or July. Check the latest regulations for the latest dates (since they can change). 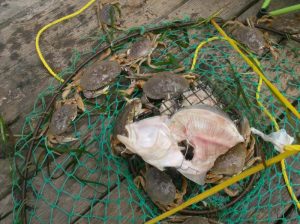 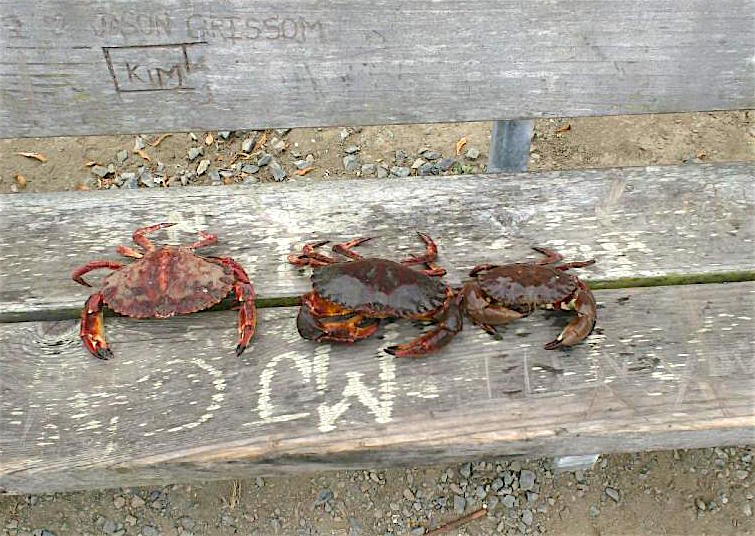 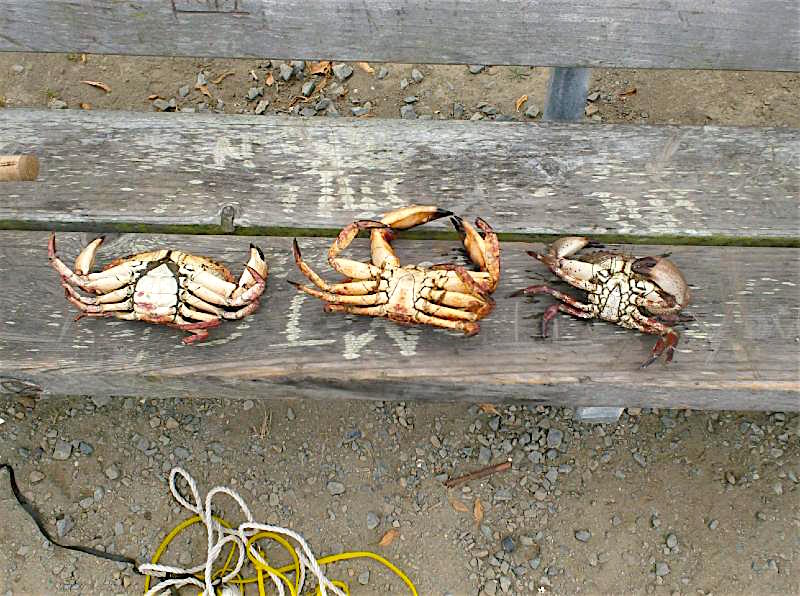 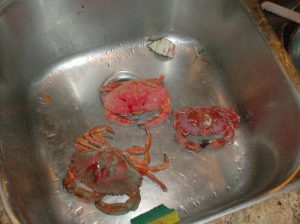 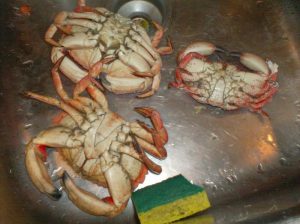 <*}}}}}}}}}>< — Fish surveys done by the California Department of Fish and Game between 2004 and 2009 are somewhat limited and do not, in my opinion, give a full views of the species you can encounter at the pier. But, they are the only surveys we have,

Fished Spud Point Marina and the Doran jetty at Bodega Bay this weekend. Fishing was slow for larger species. Most common catches were staghorn sculpins, shiner and barred surfperch, and jacksmelt which were available in large quantities. Used pile worms and squid, both seemed to work equally well. Either used a high low leader and slowly jigged it directly below the pier, or used a bobber set about 4 feet above the hooks and cast as far as possible. Most perch were small, under six inches, and the jacksmelt averaged around ten inches. The crabbers seemed to be doing well, most had at least a few rock crabs, some even had limits. Good luck and tight lines !

Waste not want not….right? Oh my god… This fish was damn near dead when I finally got HIM (I checked the tail feeling remorseful) in. Fight time was about 45 minutes at least. Minus the rather large carcass hanging in my backyard I wound up with about 80 lbs of yummy stingray. Friends! I normally do not practice the habit of keeping bat rays and now I remember why. What a horrible thing to do. First making sure its dead enough to keep and then cleaning it. Yuck! The last one I kept was about 30 lbs. This, if you’ll pardon me, was a friecken giant. And I got it all by myself. LOL> I hooked him on the last cast for the nights fishing. After four successful bouts with others of his kind I decided I would keep one. And of course I finally got the big one. Outweighing the rest of tonight’s entertainment by at least 50 lbs. But… one was going home… and so was I. Regular slider rig pitched off of the beach next to Spud point pier, in Bodega Bay, loaded with fresh caught ghost shrimp, was all it took to fall this mighty giant. Yes, he fought till the end, stripping every inch of line I had on my 250yd spool, but in the end, yup, you guessed it, I won. Gaffing a 100lb+ stingray out of 2′ deep water, by yourself isnt easy. He bent my aluminum gaff, and showed me a thing or two about bat ray. Anyways… I’m back at my g/f’s getting ready to split it up into four bags. Barbeque. Bat ray tastes great, but man the cleaning sure is work. The damn liver on this one weighed 20 lbs… Sorry about the long post, but by far, this guy was the biggest fish from shore I have ever caught….. Fish on! Willie

Saw a friend from work out at the pier on our way back. His wife had the biggest perch I’ve ever seen in a bucket. Not sure what kind of perch — it was sort of a reddish color with some faint black stripes (red tail?). Anyway it must have been almost two feet long. She caught it in about three feet of water on a raw shrimp. We rigged up and tried for some more but they were not biting. It’s pretty disheartening not catching fish, but even worse when you can see the fish in the water and see them NOT taking your bait…lol.  Röc´K HòppéR – Thë J?††? Jùnk‡