Named for their shape, two mid-sized piers sit at the north end of the Embarcadero in Morro Bay. They are only a short distance apart and the environments and fishing are nearly identical. Regardless of size, they are the homes for most of the pier fishing taking place in the bay and both offer up seasonally excellent fishing. In fact, the North T-Pier has the highest fish per hour average of any of the 127 California piers I have fished from over the past 47 years. And, the stats for the South T-Pier are pretty similar. 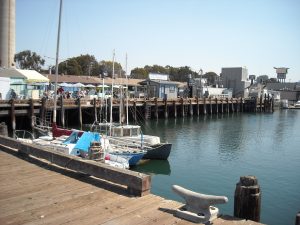 Environment. Both T-piers are working piers that offer space to both recreational and commercial anglers. I believe the North T-Pier used to see more anglers but this has changed as the number of boats tied up next to the pier has grown. In addition, some fishable water has been lost on the north side of the pier as docks and slips have been added near the Coast Guard boats. Today the recreational angling is pretty evenly divided between the piers but it can vary depending upon the number of guano-covered derelicts blocking the space usually used by anglers. 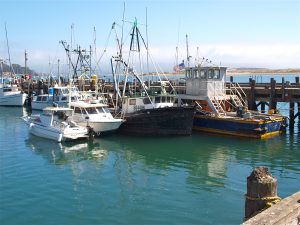 The North T-Pier extends out 180 feet into the bay and then has a 400-foot-wide end. It sits near the Coast Guard Station (the reason why some refer to it as the Coast Guard Pier) and is directly behind the Harbor Patrol office. Water ranges in depth from shallow at the shoreline area to fairly deep (about thirty feet or so) when casting out from the outermost edge. The pier surface itself is fairly close to the water, no more than 8-10 feet at high tide. 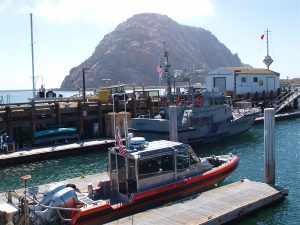 The pier does experience heavy tidal activity and currents that can limit your ability to fish, especially if you are trying to use light tackle inshore or around the pilings for perch and rockfish. If casting out from the pier for sharks and bat rays you can sometimes need 8-10 ounces of lead (or more) just to hold bottom which in turn demands fairly heavy gear.

In addition the strong currents often push along a seemingly unending amount of eelgrass, heavy/massive/ponderous/oppressive amounts, that soon cover every rope in the water and make it nearly impossible to fish. Every time you drop your line down into the water it will be quickly covered by the eelgrass and soon you’ll be muttering to yourself. On such days, take a break or move over to Cayucos. Luckily, most of the time the water around the piers is more conducive to fishing. (The currents and grass are primarily a bay phenomenon but the only other place I have seen such currents and eel grass in this quantity is up in Humboldt Bay by Eureka; there too an angler can be forced to terminate the fishing day in frustration.)

The good news is that good numbers of fish can be caught as well as a nice variety of species. My personal experiences over the years (I first fished this pier in 1974) and messages on the PFIC message board have convinced me that anglers here see three distinct fisheries from the piers as well as one non-fishery.

The first fishery exists primarily from late fall, early winter, till around June-July. This fishery is the quest for the normal resident species that live off the foods found in the bay and on the pilings throughout the year. Primarily these fish are seeking out the worms, clams (especially horseneck clams), and shrimp of the bottom along with the mussels, barnacles, small crabs, sea spiders and various other creatures found on the pilings. 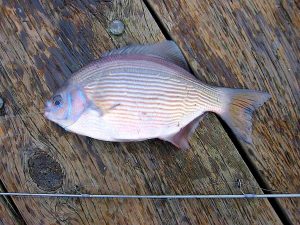 Most common to this mix are a variety of perch—blackperch (buttermouth), white seaperch, pileperch, rubberlip seaperch, rainbow seaperch, striped seaperch, an occasional barred or calico surfperch, and the all too frequent shinerperch. During the spring to summer these species can be joined by the more schooling, mid-water species—walleye surfperch, silver surfperch and infrequently spotfin surfperch. 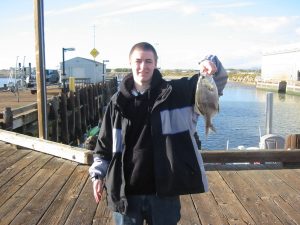 The perch, in turn, are joined by a variety of rockfish, the most common being kelp rockfish (grass bass), grass rockfish (grass bass), brown rockfish (bolina), gopher rockfish (grass bass) and an occasional blue, black or olive rockfish. Most of these are mid-sized individuals. They’re larger than the young-of-the-year (YOY) juveniles that enter the bay in the summer, but smaller than the adult fish taken from boats out in deeper waters. When the YOY fish enter the bay, they’re usually a combination of bocaccio (some years), black rockfish, blue rockfish, and several deeper water species including copper rockfish and vermilion (both of which I have caught). Or, I should say think I caught because the identification of juvenile rockfish can be perplexing to say the least. Joining these bottom species will be small to mid-sized cabezon and lingcod (with YOY lingcod also entering the bay during the summer). 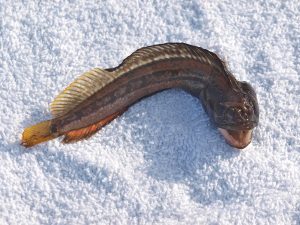 If using small hooks, a variety of other small species will also show up, an interesting mix of sculpins, fringeheads, and blennies that frequent the bottom and the miscellaneous structures on and around the pier. Mixed in among those small fish will also be some bigger ones including monkeyface eels (pricklebacks) and though most reported from the pier are only 12-14 inches long there should be some bigger ones down there.

Finishing off this first fishery are the resident flatfish—sole, flounder, turbot, sanddab and halibut—that frequent the bay. All are found in the bay year round but for the angler the main quarry are starry flounder in the winter months (although more common in the back bay) and California halibut during the summer months. 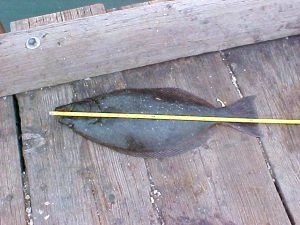 The second fishery is the one that yields such high fish per hour average and it generally occurs June to October. Vast schools of pelagic species will enter the bay, sometimes flushing in and out with the tides, sometimes remaining in the bay itself. The main species are Pacific sardine and jacksmelt, but they can be joined by Pacific mackerel and jack mackerel (Spanish mackerel). Sometimes it will be just one species, sometimes there are mixed schools with two or more species often separating themselves by water depth. Interestingly, the favorite for some fishermen—sardines—only really began to show up in huge numbers in the early ‘90s. Before then it was usually only an occasional school or no school. While my records in most of the ‘70s and ‘80s show huge numbers of bocaccio they show few if any sardines. Why the favorite of the pelagics? Because sardines make such excellent bait for a number of species including large sharks.

The sharay fishery, the expedition for sharks and rays, is the third fishery. Both sharks and rays (as well as a few skates) are bay residents throughout the year but the bite really improves when the water temperatures rise slightly and when the amount of food goes up. When the pelagics move into the bay the sharks and rays seem to go on a feeding frenzy and it’s common to catch several most nights. Here the favorites are big bat rays and leopard sharks but they will be joined by brown smoothhounds, spiny dogfish, an occasional soupfin, and some shovelnose sharks (guitarfish). Numerous and almost a nuisance at times will be smaller thornback rays.

Although there once was a lively quest for crabs—spider crabs, rock crabs, and even a few Dungeness, that ended with the enactment of the Morro Bay State Marine Recreational Management Area that only allows the take of finfish in Morro Bay. So too the once practiced take of ghost shrimp and mussels to be used for bait; both are prohibited. You will still quite often see a crab grab hold of a bait and occasionally may see an octopus encircle your rigging but both “Mr. Crabby” and “Mr. Tentacles” need to be returned to the water unharmed. 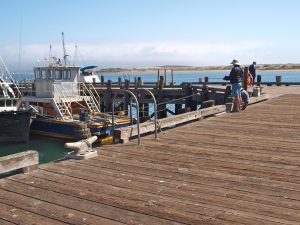 Fishing Tips. Each of the three fisheries requires somewhat different gear and baits. For most of the perch the pilings of the stem leading out to the end will be most productive although any piling on the pier may produce fish (they move around). I especially like to find spots, as in the corners, where there are a high number of pilings in a small area. Fish as close to the pilings as possible since they may be covered with perch-attracting food; fish on the bottom or just off the bottom. The best bait for the larger perch are live worms (pile worms, bloodworms, lugworms) or live ghost shrimp but fresh mussels or small pieces of market shrimp will also produce fish. Use light tackle and small hooks, size 8-4 depending upon the species you’re seeking and the bait used. Always hold your rod and be alert for the tap of a perch. Frequently they will tap the bait several times before biting it and you need to learn when to strike. Typically if you catch one there will be more around. 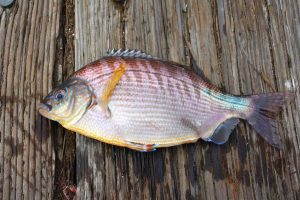 Another spot is under the walkway that sits over the shoreline on the south side of the pier; you can cast back under the walkway to the shallow water rocks and pick up a few perch, especially in the springtime. An occasional surprise can be monkeyface eels (pricklebacks) but you’ll need a little luck to land them if you’re using light line. Deeper waters will see an occasional wolf-eel but again some luck will be required to land the fish. Always possible are the small sculpin that hang out in the crevices by the rocks; my most unusual sculpin was a coralline sculpin taken in July ’09.

As for the walleye and silvers, most I have taken have been mid-pier. They take smaller hooks, prefer a small piece of worm or anchovy, and the bait should be kept midway between the top and the bottom; they can also be caught on Lucky Lura/Sabiki type bait rigs with or without bait.

If you’re seeking out flatfish, a sliding leader/fish-finder rig with size 6-2 hooks is most commonly used (although a hi/low will also work). Flounder and sole seem to prefer sea worms or small fillets of anchovy/sardine although small, live ghost shrimp can also be excellent. Most of the small flatfish I’ve seen or caught at this pier have been in the mid-channel between the pier and the shore. However, flatfish are also found in the waters away from the pier, but a heavier sinker is often required. Late spring to late summer is the prime time for halibut and though they are a common fish caught by boaters few seem to be landed at the pier. If you do seek them out use a sliding leader with a live shiner, small walleye, small smelt or sardine for bait. 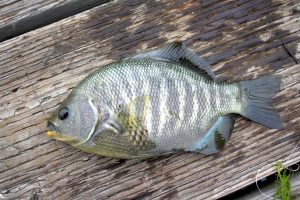 When the pelagics show up the standard rigging used by most is a Sabiki-type bait rig. Most of the time the channel between pier and shore yields the fish but again, boats tied to the pier can make it hard to fish this area. If the stem is blocked head out to the far left corner of the pier where you can usually cast out into relatively boat-free water (but this is why it makes sense to sometimes go down to the South T-Pier). Typically the schools will behave slightly differently with sardines on top with jacksmelt and mackerel a little deeper in the water. Sometimes a fairly steady retrieve works, sometimes you need a herky-jerky retrieve, sometimes with the sardine hardly any action is required. Cast out and try different levels and retrieves until you figure out what is working.

If large mackerel are present, I often just use a couple of size 6 hooks tied hi/lo with a torpedo sinker. Three to four mackerel on a bait rig have a tendency to tangle up the rig when they’re hitting fast and furious; such a mess takes too much valuable time to untangle and the bait rigs are too expensive to replace. Nevertheless, whatever you use you should be able to catch a mess of fish relatively easily when the schools are present.