Identification: Pile perch are distinguished by the black spot on the cheek, the very deeply forked tail, and the very tall, first soft rays on the dorsal fin that are about twice the height of the last spines. Color is dark brassy-brown, fading to silver on sides and belly; often has yellow pelvic fins. Pile perch have one dusky, vertical bar across the side at about the high point of the soft dorsal. The posterior position of the bar and the deeply forked caudal fin (tail) distinguish it from sargo. 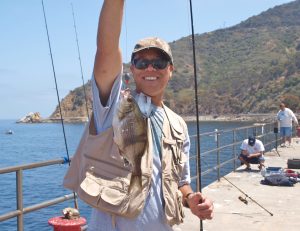 Habitat: Shallow-water, rocky-areas, and around piers and docks, both oceanfront and in bays. Recorded to a depth of 328 feet. Typically they are a bottom dwelling species, called “benthic grazing carnivores” by some. Others classify them as “commuter” fish that move between different habitats in search of prey. All agree they are primarily day feeders seeking out large, hard-shelled invertebrates that they are able to crush with their well developed, fused pharyngeal tooth plates. Since other perch do not share this ability, some scientists feel pile perch should be placed in a separate genus—Danalichthys. Foods include crabs, brittle stars, sand dollars, barnacles, bean clams, (whole) mussels, limpets, dove shells, California cones, Norris top shells, and chitons.

Shoreline: A favored species for shore anglers fishing in bays throughout the state. 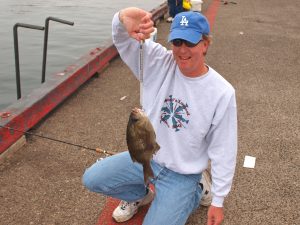 Bait and Tackle: Pile perch can be exasperatingly difficult to catch. The large perch will often be seen placidly swimming in clear view around the mussel-covered pilings while refusing to partake of the offerings of the gods up above—anglers whose mojo is evidently on empty. Damalichthys vacca do seem a little easier to catch when in their dense schools are a’spawning. Perhaps their pea-sized brains are distracted and normal caution takes a back seat to other thoughts? The most common setup is to use a high/low leader with number 6 or 4 hooks, light line, and a light sinker. Best bait in southern California seems to be fresh mussels, rock crabs or bloodworms. In the Bay Area, grass shrimp, rock crabs, pile worms or fresh mussels are best. In Humboldt Bay, frozen tube worms or crab backs are most commonly used. Usually pile perch are nestled up next to the pilings; fish accordingly. Check out the shoreline by the pier at low tide and grab some local live bait—small crabs, mussels, worms, snails or clams; these will usually make the best bait.

Food Value: One of the larger perch with flesh that is mild in flavor with small flakes and soft texture. They taste best during the non-spawning season, are low in fat content, and can be cooked using most methods.

Comments: Many years ago, at Newport Pier, I watched an old-timer show one way to catch the perch. Pile perch were doing their typical trick d’tease: big fish showing a leg but refusing to bite. The old-timer tried out a trick of his own. He took out a mass of recently pried loose mussels, at least a dozen in the clump, and in and around this mussel-mass he wound a leader that had several number 8 hooks attached. Then he attached the leader to a handline and carefully dropped it down next to the pilings. This new mini-piling soon attracted the fish and he was able to catch several of the large pile perch. Sporting? I’m not sure, but it sure was effective. Since then, I’ve seen variations of this technique at both the Santa Monica Pier and at Stearns Wharf in Santa Barbara and heard stories of its use at the Goleta Pier.