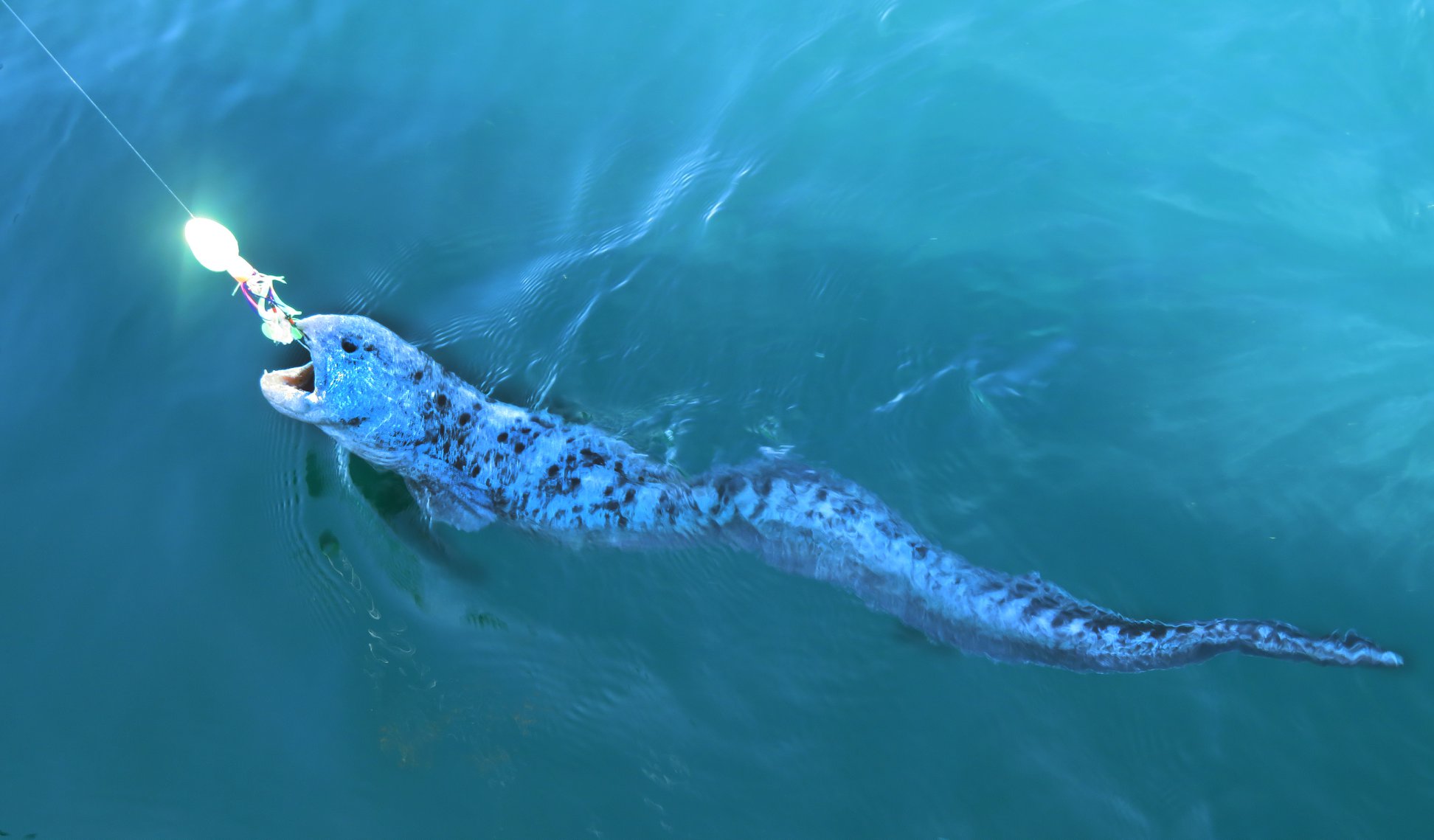 Species: Anarrhichthys ocellatus (Ayres, 1855); from the Greek word anar-hichas (an ancient name for a fish which resembled this species) and the Latin word ocellatus (eye-like spots).

Identification: The body is long and eel-shaped; the mouth is large and filled with large, canine-like, teeth. Their coloring is green to gray with round dark spots on the dorsal fins and body. Related to the blennies; it is not an eel.

Size:  To 79.9 inches although there are rumors of eight-foot wolf-eels. Pier-caught wolf-eels are rarely more than 2-3 feet long.

Range: Northern Baja California, to Gulf of Alaska, southeastern Bering Sea to Cape Menshikof, west along the Aleutians Islands to the Krenitzen Islands. Also reported from the Sea of Japan and Sea of Okhotsk. Common from Central California to Gulf of Alaska. Uncommon but not rare south of Point Conception.

Piers: Not common at any pier but a few are taken every year from piers in central and northern California that are located near rocks or reefs. Best bets: Port San Luis Pier, Cayucos Pier, Santa Cruz Wharf, Fort Baker Pier, Point Arena Pier, Trinidad Pier, and Citizens Dock in Crescent City.

Shoreline: Taken by anglers fishing in rocky areas in central and northern California.

Bait and Tackle: Wolf-eels will hit almost any bait but I’ve seen them caught most often on shrimp, small crabs, mussels, abalone or on anchovy. Because of their strength and habit of retreating to rocks as soon as hooked, most that are hooked are probably not landed. To land one, use a heavy size 2 to 2/0 hook and heavy line (20- to 40-pound test) or even a wire leader.

Food Value: Delicious mild flavored flesh that is white in color and dense in texture. The flesh can be filleted or steaked and cooked in almost any manner although poaching and steaming is a favorite.

Comments: I saw the power of a wolf-eel’s mouth once when I was fishing at the old Moss Landing Pier. An angler had caught a medium-sized fish and wanted to save his leader that was imbedded deeply in the mouth of the fish. He pried the wolf-eel’s mouth open and inserted a small narrow broom handle to keep it open. The fish simply snapped the handle in half. Just think what the mouth of a wolf-eel could do to a finger!