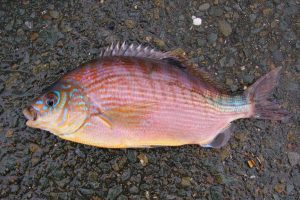 Shoreline: A favored catch for rocky shore anglers in southern and central California. 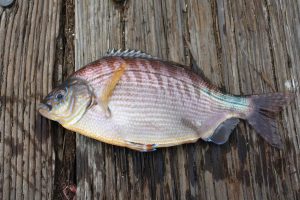 Bait and Tackle: These small perch are best taken with small size 6 or 8 hooks tied directly to your line, or by using a high/low leader. Best baits are fresh mussels, pile worms or small live rock crabs. Fish directly on the bottom.

Food Value: Fair, although they’re almost too pretty to keep. Their flesh is mild in flavor with small flakes and soft texture. They taste best during the non-spawning season, are low in fat content, and can be cooked using most methods.

Comments: These fish, along with striped seaperch and pileperch, often enter central and northern California streams and spawn in the tidewater areas; when they do, fish will be caught on nearly every cast. They put up a spirited fight, but for me, their beauty and fairly small size warrants a return to the water.