Species: Hexagrammos decagrammus (Pallas, 1810); from two combinations of Greek words; hex (six) and gramma (line), deca (ten) and gramma (line, referring to the number of lateral lines on the side of the fish).

Identification: An elongated body with a conical head. Distinguished by the five lateral lines on each side of the fish and two pairs of cirri—one pair above each eye, the other on top of the head. The coloring is so different for males and females that initially they were described as two distinct species. The males are dark gray to brownish olive with bright blue spots on head and sides. Females are gray-brown, bright golden to reddish-brown spots on body and head, and yellowish-orange fins. The inside of the mouth in both sexes is yellow.

Size: To 24.8 inches although most caught from piers are less than 15 inches in length. The California record fish measured 17 ¾ inches and weighed 3 lb 4 oz. It was taken near Carmel in 2014.

Range: From La Jolla, southern California, to Attu Island in the Amchitka Islands in the Aleutian chain, Alaska, and the Bering Sea. They are rare south of Point Conception although two specimens were taken from the Santa Monica Pier on March 1, 1953 by anglers using mussels as bait. 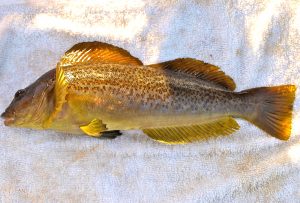 Habitat: Considered a nearshore, shallow-water species in much of its range but found in deeper, cooler water in southern California. Usually in rocky environment waters less than 150 feet deep and often in kelp beds. Adults are territorial and not known to migrate. Both juveniles and adults consume a wide variety of bethnic species, essentially whatever they can find to much upon. Favorites include crabs, shrimp, snails, chiton, abalones, octopi, fish eggs, algae, and fish.

Shoreline: One of the main catches for rocky shore anglers in northern California. The south jetty at Eureka is considered the number one greenling hole in the state. 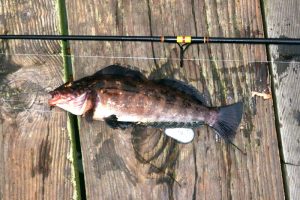 Boats: Primarily an inshore fish although quite a few are taken by boaters fishing for shallow water rockfish in waters from Half Moon Bay north.

Bait and Tackle: A high/low leader using size 6 hooks, and a small piece of shrimp, fresh mussel, pile worm, or tube worm, is the ideal setup for these fish. Fish around rocks in the water, or under and around the pilings. Kelp greenling will usually tap the bait first then come back and take the bait with a second bite; be patient and be prepared to reel in the fish on the second hit.

Food Value: Greenling are good quality, mild-flavored fish with large flakes and moderate fat content. They’re suitable for most forms of cooking but they are especially good for pan frying. Most pier caught fish are fairly small so the fillets may not offer much meat.

Comments: Roughly half of all kelp greenling are mature by age five when they are about 9.5 inches long; they live to about 12 years of age. The top pier spots in the state to catch kelp greenling are the Point Arena Pier, Trinidad Pier and Citizen’s Dock in Crescent City. At Point Arena, cast out to the reefs that run parallel to the pier and be prepared to lose a lot of tackle; at Trinidad, fish around the various rocks that abound in the inshore portion of the pier; at the Citizen’s Dock, fish the inshore rocks by the shoreline. 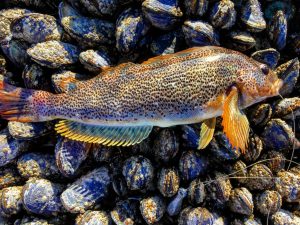