It was at this small pier that I witnessed one of the most unusual if not fulsome sights that I have seen on a California Pier. I had arrived early one morning in July of 1997 to try for some perch—or whatever else might be frequenting the area that day. I quickly noticed that there was a fairly strong current heading off towards the bay’s inlet. I also noticed a fairly heavy rope tied to the corner of the pier that trailed off into the current. Wondering if someone had left a crab trap, and wanting to remove the rope before it became an entanglement to my fishing lines, I began to haul the rope into the pier. It was heavy, much too heavy for a crab trap. Slowly the rope came in and then I saw it, the object at the end of the line. It was the carcass of a small lamb. The lifeless body was whole but the throat had been cut, as had been the gut area. My immediate guess was that it had been bled and used to attract sharks by someone the previous night. Subsequent talks with local anglers indicated that I was probably right. It seemed like an extravagant waste but I’ll never know the details. I do know the revulsion I felt that morning. What a way to start off a fishing trip.

Environment. The 250-foot-long pier extends out from the end of a 350-foot-long, solid-fill causeway or jetty. Adjacent, inshore, to the side of the causeway, is located the 45-acre Eureka Marsh, aka Palco Marsh, site of considerable discussion (as in what’s going to happen to it?).

The causeway allows the pier to extend out into water much deeper than shore-based anglers could normally reach. However, the water is still very shallow much of the way out on the pier. During low tide, rocks along the causeway actually poke out of the water. 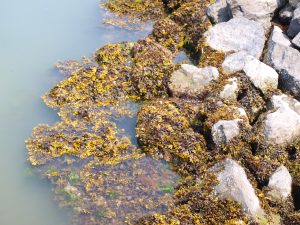 In fact, even out about three quarters of the way, water will still be only a few feet deep. At the end, the water is deeper and this area generally yields the best results. 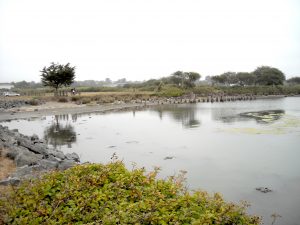 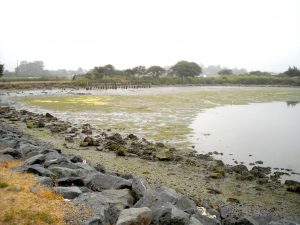 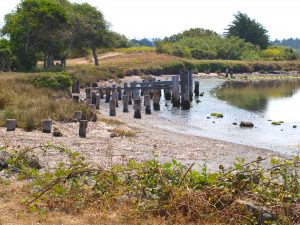 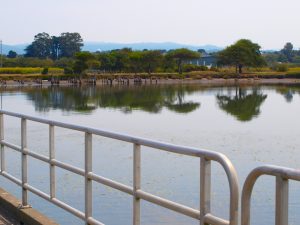 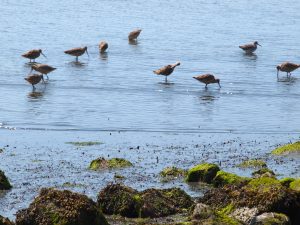 The bay bottom here is mud with considerable eelgrass—again, about three quarters of the way out on the pier. 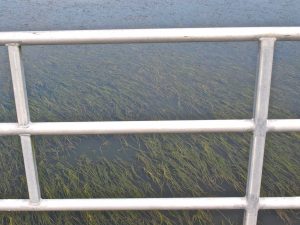 Pilings show only light growth but the pier was built on the site of an older pier and there are many older wooden pilings which are fairly heavily covered with barnacles. As a result, it sometimes is a good pier for perch, especially pileperch and white seaperch. Nearshore, to the south along the side of the causeway, is a shallow-water mudflat area. To the north of the causeway are the remains of an extensive wharf area (or at least the pilings from the wharf). This pier is also the closest to the entrance to Humboldt Bay. Because of this, the Fish and Game Department predicted when it was built that it would yield a greater variety of fish than other piers in the area. 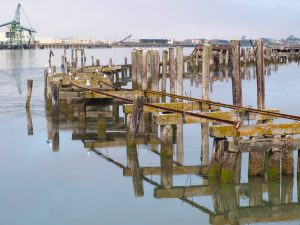 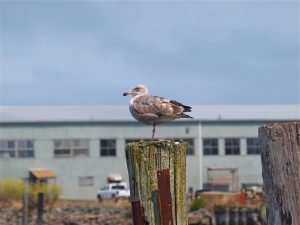 That prediction may still prove to be correct, but so far I’ve seen little in the way of steady action at the pier. In addition, the pier is vulnerable to heavy tidal action (which, to a degree, is true at almost all piers along the Eureka waterfront). When combined with extensive nearby beds of grass it produces a twofold problem. Anglers may have a hard time holding bottom unless they’re using fairly heavy tackle (6+ ounce sinker) and they may have real problems with grass getting on the line. The exception would be slack periods of tide, both high tide and low tide.

Fish and Fishing Tips. A review of the pier’s species reads like a conspectus of most of the Humboldt Bay piers. The primary fish caught (at least during the day) are several varieties of perch. Predominate are pileperch, redtail surfperch, and white seaperch (split-tail perch). All of these will be landed year-round with the pileperch dominating late fall to winter and the redtail surfperch and the white seaperch more common spring to summer. All three are best landed by fishing near the bottom, around the pilings, using a high/low leader, and size 6 or 4 hooks baited with tubeworms, small live rock crabs (caught around the rocks by the jetty), small pieces of market shrimp, ghost shrimp or crab backs.

Spring to fall will yield lots of walleye surfperch and silver surfperch. Both of these are best caught on a modified snagline-like affair; simply tie several size 8 or size 6 hooks to your line and bait with small pieces of bait. For the walleye a small strip of anchovy works best, silvers will take anchovy but also like tubeworms and small pieces of shrimp. Walleye are best caught near the bottom, silver surfperch midway to the top. Spring and summer should also yield the larger redtail surfperch with tubeworms, small pieces of shrimp and ghost shrimp being the best producers.

A couple of small ‘uns are far too common and not surprisingly it’s shinerperch and staghorn sculpin (bullheads). Small hooks baited with pile worms or pieces of tubeworms will almost inevitably attract the pesky bait stealers, sculpin on the bottom, shiners from the bottom up to mid-water depths. There’s not much use in these waters for the bullheads but the shiners can be used as live halibut bait. By the way, mixed in with the staghorn sculpin will occasionally be one of those big, old, ugly buffalo sculpin that don’t seem much good for anything since they’re generally too small to eat and too big to use as bait.

Because of the strong currents and the nearby rocks, jacksmelt find this area to their liking. For these, use a series of small size 8 hooks; each baited with a small piece of tubeworm. Fish just under the top of the water with a float or bobber.

Nighttime is shark time! The deeper waters have proven to be the home for big sharks and rays and an attractant for the anglers who pursue this larger game. Some nights will see as many as a dozen rods set out waiting for the sharks. A few of the sharks landed will be leopard sharks, but more will be sand sharks (brown smoothhounds) or spiny dogfish, fish ranging from two to four feet in length. This is the only spot where I have heard a dogfish called a spinarola but it makes sense given the way they like to spin and roll around the line. It also makes a good case for using a wire leader if you are seeking these fish.

Local anglers also talk of large cow sharks (sevengill sharks) being caught fairly frequently in the bay between the spring and summer months although far more are caught out on the boats than from the pier. The shark fishermen also catch some truly huge bat rays (stingrays) and skates but it seems to me that most of the locals I’ve talked to do not appreciate the action they get from these fighting machines. They’re just seen as trash fish for the more desirable sharks. As mentioned, nighttime is the prime time for all of these and squid seems the best bait given the plethora of crabs in these waters. Place your hook a couple of feet off the bottom and bring a gaff or net to get the “monsters” onto the pier. Another bait often used by locals (see below) is the small eels that often can be found under shoreline rocks; the eels are supposed to be excellent bait for leopard sharks. Do not string up a lamb for bait. 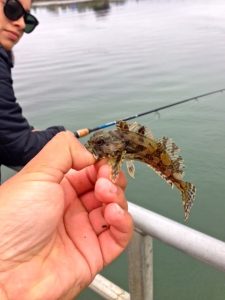 Less frequent, but fish which show up at times, are steelhead trout, California and Pacific halibut, and a very few green sturgeon (which are now illegal to take).  Although high concentrations of both herring and anchovies have been detected in this area, and bait rigs can sometimes fill up buckets with the baitfish, they have not proven to be the salmon attractants that many expected. Some salmon have been landed from the pier but not in as high a number as I would have expected. Another fish, which should show up at times, especially in the summer, is sablefish, but catches to date have been minimal. 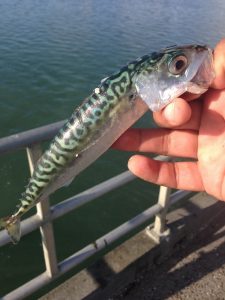 A small Pacific mackerel — an uncommon species this far north

Crustaceans. Some times there are more people casting out their hoop nets for crabs than there are people fishing. It makes sense since it is an excellent area to catch crabs, a reliable spot to net red (rock) crabs, rock crabs, and Dungeness crabs. Check the latest regulation booklet for dates on when the Dungeness crab season is open (it can change year to year). 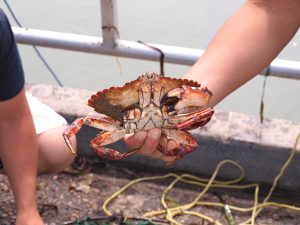 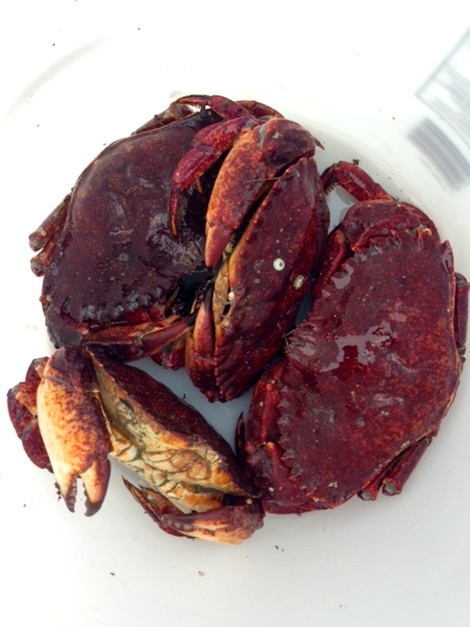 Recently only Leopard sharks have been taken at night with live bait. (Small eels you find under the rocks at low tide seem to work best). A few small perch have also been showing.

… We decided to hit the Del Norte Street Pier, which looked promising. It’s just around the corner from the Motel 6 where I was staying, and there’s an indoor flea market right nearby where a guy has a bait and tackle booth. According to one local, if you get there at low tide, there are lots of clams to be had for bait at the shore where the pier starts. He catches perch with ‘em.

We didn’t see anything caught there, and didn’t have any success with the Hair Raisers or Fish Traps I had with me. The bait fisherman weren’t doing any better. The current was really swift too, and still an inbound tide. There were reports of halibut coming in, but not easily accessed from shore.

Date: February 3, 2003; To: PFIC Message Board; From: phishergirl; Subject: Re: Eureka tips or ideas anyone?

Del Norte St pier in Eureka can yield some huge bat rays, but usually you have to deal with a pretty motley group of druggies.

Date: August 15, 2008; To: PFIC Message Board; From: Ken Jones; Subject: Quick Trip To The North Country

This past week I took a long needed trip up to the Redwood Empire and the North Coast piers. Not much to report although it provided some needed “soul food”

Monday 8/11—Eureka upon arrival was in the mid-60s, overcast and cool—the way I like it. I made a short stop at Bucksport for some back-up sinkers, checked into the motel, and headed over to the Del Norte St. Pier.

This pier has frankly been disappointing over the years and my first, short, stop was much the same. The tide was ripping at the front of the pier and with it came gobs and gobs of grass. I tried to hold bottom at the end but finally gave up and moved closer inshore to try for perch (or whatever). Unfortunately it was whatever as nothing but shinerperch made an appearance. I finally decided to move to another pier until there was a change in tide.

After fishing at the Commercial St. Dock for an hour and half I headed back to Del Norte. Upon arrival back, I found the tide had slackened but it was still fairly strong and still full of salad. Nevertheless I joined about a half dozen friendly anglers out near the end and began the shark vigil. Unfortunately I only managed one shark, a three-foot-long dogfish (on cut mackerel), one of four sharks taken by the assembled fishermen.