Species: Cephaloscyllium ventriosum(Garman, 1880); from the Greek words cephalo  (with a head) and scyllium  (like a dog or monster) and the Latin ventr  (referring to the belly).

Identification: Has a broad flat head with a rounded snout, and sharp, pointed little teeth. Their first dorsal is back of the middle of body and directly above pelvic fins; second dorsal above anal fin. Their skin is rough and appears flabby while coloring is yellowish-brown to creamy, with black or brownish spots and saddles; sometimes with white spots. When caught, the swell shark may inflate its belly with air or water until its circumference nearly triples in size. However, young swell sharks are not able to duplicate this neat little trick. So see, sometimes it pays to be an adult. 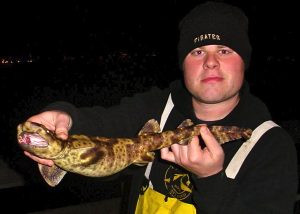 Size: To at least 43.3 inches although most caught on piers are less than three feet in length.

Habitat:  Usually found near kelp beds or rocky areas that contain some kelp; likes to spend the daytime hours holed up in crevices or caves. A nocturnal feeder, they emerge at night to search for food—mainly small fish. But they seem a little lazy. Although they sometimes suck other fish into their mouth (as would a normal feeding fish), some reportedly simply open their mouths and wait for the smaller fish to swim in. It’s called yawning and perhaps explains why swell sharks have less than an athletic looking body (afterall, how much energy can be expanded in yawning for your food?). The next question becomes how often do you think bait is going to swim into their mouths, especially dead bait? Perhaps this is one reason that they are not more commonly caught. Most common in fairly shallow water but found down to 1,500 feet. 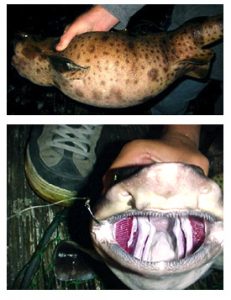 Shoreline: Only an occasional catch from the shore. The Ventura and Channel Island breakwalls are considered to be good areas in the southland as well as Twin Harbors at Catalina Island. Occasionally taken by central California anglers fishing near kelp, especially the area north of Cayucos.

Boats: Rarely taken by boaters although kayakers who can fish fairly shallow waters and kelp beds catch a few.

Bait and Tackle: Most swell sharks that are caught from piers are around two feet in length, so medium tackle with a size 2 to 2/0 hook should work fine. Small fish, crabs, and shrimp, seem to be the best bait. 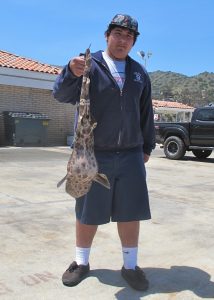 Swell shark caught by Thomas at the Cabrillo Mole in Avalon

Food Value: It is reported that eating a swell shark is not so swell! The flesh is slightly toxic and causes stomach cramps and nausea as well as acting as a cheap aperient (result: diarrhea) and emetic (result: vomiting). Unless you’re really into the masochistic routine I would avoid puffer stew. Nevertheless, I can see all those sadistic little eyes lighting up. Wouldn’t it be cute to give Henry some puffer steaks for his dinner? Let’s see how long it is before he heads to the head.

Of course there’s always the story that’s told in the fascinating book Cod, by Mark Kurlansky. He mentions the unusual methods used by a people (Icelanders) seemingly on the verge of starvation: “They ate what the island produced, which was mainly every conceivable part of a cod-fish and a lamb. They roasted cod skin and kept cod bones until they had decomposed enough to be soft and edible. They also ate roasted sheeps’ heads, particularly praising the eyeballs. Another specialty was hákarl, the flesh of a huge Greenland shark, hunted for the commercial value of its liver oil. The flesh, which contains cyanic acid, a lethal poison, was rendered edible by leaving it buried in the groud until it rotted.” Apparently æstur hákarl (Icelandic for fermented shark) with its ammonia-rich smell and taste is still enjoyed by some of the locals.

Leaving aside this strange diet, and the question of how they discovered these enriching techniques, it makes you kind of wonder if a swell shark could be made edible by burying it in the ground for a few weeks. Anyone want to give rotted swell shark a try? Perhaps the “Iron Chefs” could do a show using æstur hákarl as the featured ingredient? 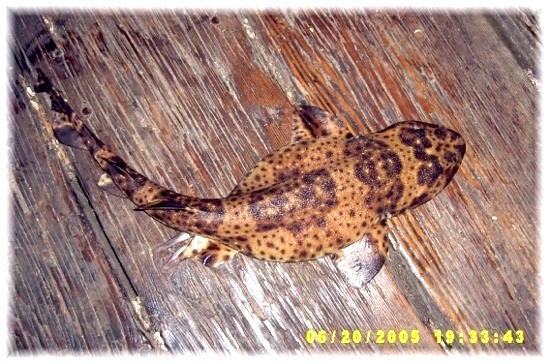 Swell shark at the Cayucos Pier in 2005

Comments: An unpleasant and mistaken belief in some areas, especially the central coast, is that returning a swell shark to the ocean after capture ruins the fishing. It’s a rather stupid idea, and wrong, yet you’ll often find misshapen dying or dead swell sharks littering the piers. Since you don’t want to eat swellies (see above), and since they DO NOT hurt the fishing, please return them to the water.  Of course that may not be as easy as it sounds! A puffed up shark returned to the water may simply float away to be attacked by… whatever. Best is to net them and bring them to the top of the pier as quickly as possible. Then, as carefully as possible (since they do have sharp teeth), remove the hook. Try to then keep their mouth shut while returning them to the net and lowering them back down to the water. If successful, they will have gulped as little air as possible and still be able to swim away. 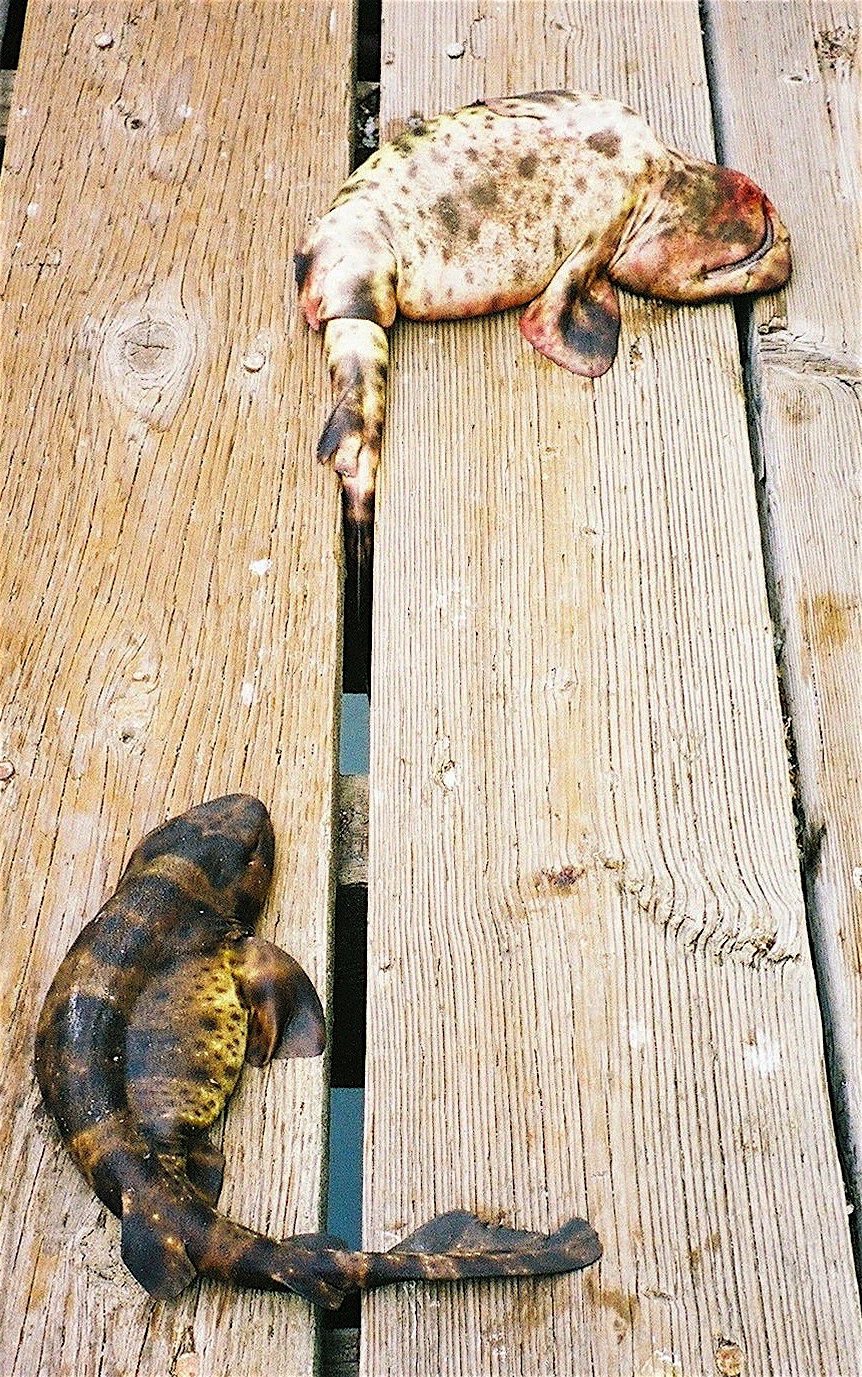 Swell sharks left to rot at the Avila Pier