For about ten years I lived in the East Bay community of Pinole. During that time I learned to appreciate and respect the town of Oakland, a town that seemed to get little positive publicity (especially in relation to San Francisco, its big sister city across the bay). Oakland was the ugly little sister unworthy of a visit. But I fished this pier on a regular basis from 1991 until 1995 and the scene I saw at the pier and nearby Jack London Square belied, at least in part, the negative image of the city.

The pier was well designed and beautiful to my eyes, offered a wide range of facilities, generally had decent fishing, and was rarely crowded, at least in comparison to other East Bay piers.

The pier was 290 feet long and fairly new, opening in 1983 after conversion of the former Clay Street Pier (which was built back in 1918 (some say 1930). Evidently the conversion wasn’t too successful since the deterioration of the pilings and surface area of the pier led to it being declared structurally unsound” by the Port of Oakland engineers in 1998—when it was closed. Unfortunately, the pier is now history! 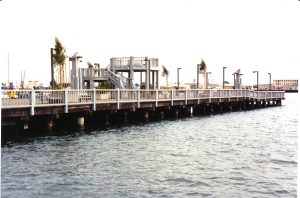 Environment. The pier was located two blocks north of Jack London Square, a trendy area of restaurants, hotels and tourist shops. Adjacent to the south side of the pier was the loading platform for the Ohlone Spirit, the Oakland to San Francisco ferry.   On the north side of the pier set the restored presidential yacht USS Potomac, a ship with a somewhat checkered past. During the 1930’s and ‘40s it was the presidential yacht for President Franklin D. Roosevelt, and appropriately it made many voyages on the Potomac River in Washington D.C. Some have called it a “Floating White House.” Eventually it was sold to the public and in time—surprise, surprise, it would be seized by the federal authorities as it was bringing drugs into San Francisco Bay.  A home in Oakland would eventually emerge.

The interesting fireboat City of Oakland was anchored just north of the pier.

By 2002 the port had built a new dock for the Potomac (which offers tours) but demolition of the FDR Pier underway and a rebuild never seemed to be given much attention (who needs public piers?).

Water in the area is part of the Inner Harbor area of the Oakland Estuary; across the water is Alameda Island. The water itself gets heavy use, both by industrial and pleasure boat activity.      Pier pilings were wood with little growth on the pilings. The bottom is primarily mud but there is grass, rocks and debris throughout much of the shoreline area. As a rule, water here is calm, but during tidal changes there could be a fairly swift tidal current. 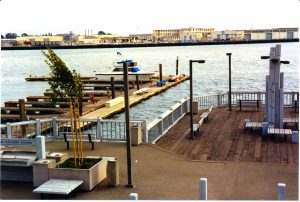 Update—the pier is still history but the adjacent ferry landing has been enlarged and the ferry business seems to be booming. Ferries run to San Francisco (two different sites) through much of the day and now ferries are scheduled to run to many more Bay Area sites including South San Francisco, Oyster Point and even Redwood City. A network of ferries is beginning to replicate what was a common scene prior to the opening of the Bay Bridge in 1936.

Bait and season were the keys for the pier. Winter and spring would see some perch and flounder and both would hit on grass shrimp or pile worms. Ghost shrimp could also be deadly for perch and flounder. Summer was the time for white croaker, a few sand sole, and perhaps even a few Pacific tomcod. Spring through fall was the time for the favorite species at the pier—striped bass and .striper time and most of the stripers would be taken on anchovies, sardines, pile worms or grass shrimp. Sharks, rays and skates were most common spring to fall but could be taken year round. All of these fish were caught on or near the bottom. Jacksmelt could be caught year-round using small pieces of pile worms or shrimp and size 8-6 hooks fished near the top of the water. 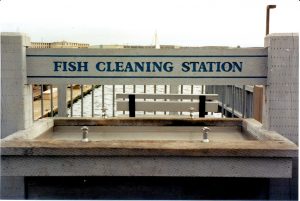 Although a variety of species wasn’t a strong point for this pier, you might be occasionally surprised, and this, for me, is one of the pleasures of fishing. One mid-October day I had started out fishing in the West Bay, at the Agua Vista Pier in San Francisco. In just a couple of hours of fishing I had caught over a dozen different varieties of fish. Included were two yellowfin gobies (Acanthogobius flavimanus), each about 8 inches long. Nothing too amazing about that except that I had fished Bay Area piers for over twenty-five years and never caught that type of fish before! Now I had caught two. But, since none of the fish were very big, I decided to move.

Shortly thereafter I was at this pier and about ten minutes later I had a strike. Upon pulling in the line I discovered I had two more yellowfin gobies. These were slightly larger fish, being nearly 10 inches in length, but other than size they were identical fish. In twenty-five years of fishing the bay, no yellowfin goby, then four on one day, two on one cast, and at two different piers on opposite sides of the bay. Why did I catch them that day? Was there a population explosion of the mighty yellowfin gobies? Was it just blind luck? Who knows? As said, the unpredictability of saltwater fishing is one of the attractions for me.

That same day also saw me catch a small chameleon goby at the pier. Both that fish and the yellowfin gobies are immigrants from Asian waters that apparently were brought to Bay Area waters in the ballasts of ships. Many marine scientists are worried that these fish may adversely impact the native species but information so far is inconclusive. 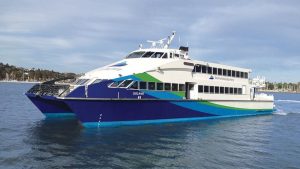 History Note. The ferries that dock next to the pier, are carrying on a long-time tradition. The first recorded ferry operation between San Francisco and the “eastern shore” (Oakland wasn’t incorporated until 1854) was begun near this area in 1850 by a Captain Thomas Gray. Captain Gray and his small ship, the Kangaroo, sailed up San Antonio Creek (later called Oakland Creek and today called the Oakland Estuary), crossed the dangerous sand bar, and entered into the bay. This “Creek Route” became the favorite route during the early years of ferry service, especially after 1859 when the infamous sandbar at the entrance to the estuary was removed. The sandbar had allowed only a 16-inch clearance at high tide and had caused many a ship to run aground (resulting in crew and passengers being forced to wade ashore).

In 1851 a ferry franchise operated by Charles Minturn began to service the area and then, in 1853, Horace Carpentier and Minturn gained a twenty-year monopoly for ferry service from Oakland to San Francisco. Their boats would sail from the wharf that Carpenter had recently completed at the foot of Broadway (today’s Jack London Square). The Broadway Wharf would continue to be the main departure point for the citizens of Oakland until 1863 when a steam train was installed along Seventh Street to take passengers down to the new ferry landing at Oakland Point. Ferry service continued from the wharf but at a much less frantic pace; eventually the Central Pacific consolidated and began to monopolize most of the local ferry lines.

Ferries themselves would be a colorful part of the bay’s transportation system until the 1930s and many of them, at least during the first few years, were headquartered in this area. Boats like the Erastus Corning, the Clinton, the Confidence, the Enterprise, the Hector, the Red Jacket, the Jenny Lind, the Sophia McLean, the Kate Hayes, the Contra Costa, and the Alameda, would sail these waters and provide a romantic way to travel still recalled fondly these many years later. For a few years there was even a sternwheel steamer on the “Creek Route.” The Chin-du-Wanattracted passengers with a ten-cent fare and calliope music and contested (somewhat violently in the 1870s) the ferry monopoly of the Central Pacific. 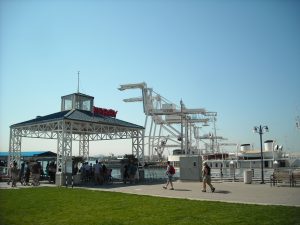