Visiting this pier (and park) at times reminds me of one of the lessons that was drilled into my head while taking my  organizational development classes in college: (to simplify) the greater the difference between the espoused theory (or thoughts) and the theory in use (the reality) the greater the  chance for problems.

Here the espoused theory is that we have a wonderful park with beautiful views overlooking the estuary. The park has good facilities for boaters and fisherman, it has the Jack London Aquatic Center that provides rowing equipment for local youth, it has athletic fields for a variety of sports, and it has the Bay Trail that runs along the waterway and extends all the way to Jack London Village. In addition, the surrounding area is undergoing redevelopment and all signs are positive for the future.

However, the theory is use, the reality, is that there is also a tremendous homeless problem all along the Embarcadero, and this park (like several others) has at times seen an encampment of homeless along with the trash, garbage, and behaviors associated with such camps. In addition, many people walk their dogs in the park and too many do not pick up the poop from their dogs. People tend to remember and avoid such areas no matter the good facilities that exist. To date, the city of Oakland has been unable to balance the needs of the public and the homeless in such a way that the needs of both are met in a satisfactory manner. Nor is there any way to make citizens more responsible; there’s no way (excepting draconian measures) to make people use trash cans and doggie bags. The opportunity exists to make this a great little park but it will take strong leadership to achieve that espoused goal.

I hope that goal is met because it is a pier where in the past I’ve been able to enjoy some peace and quiet while fishing and though the fishing itself is sometimes slow, there is always the view along the estuary and the sights associated with it. 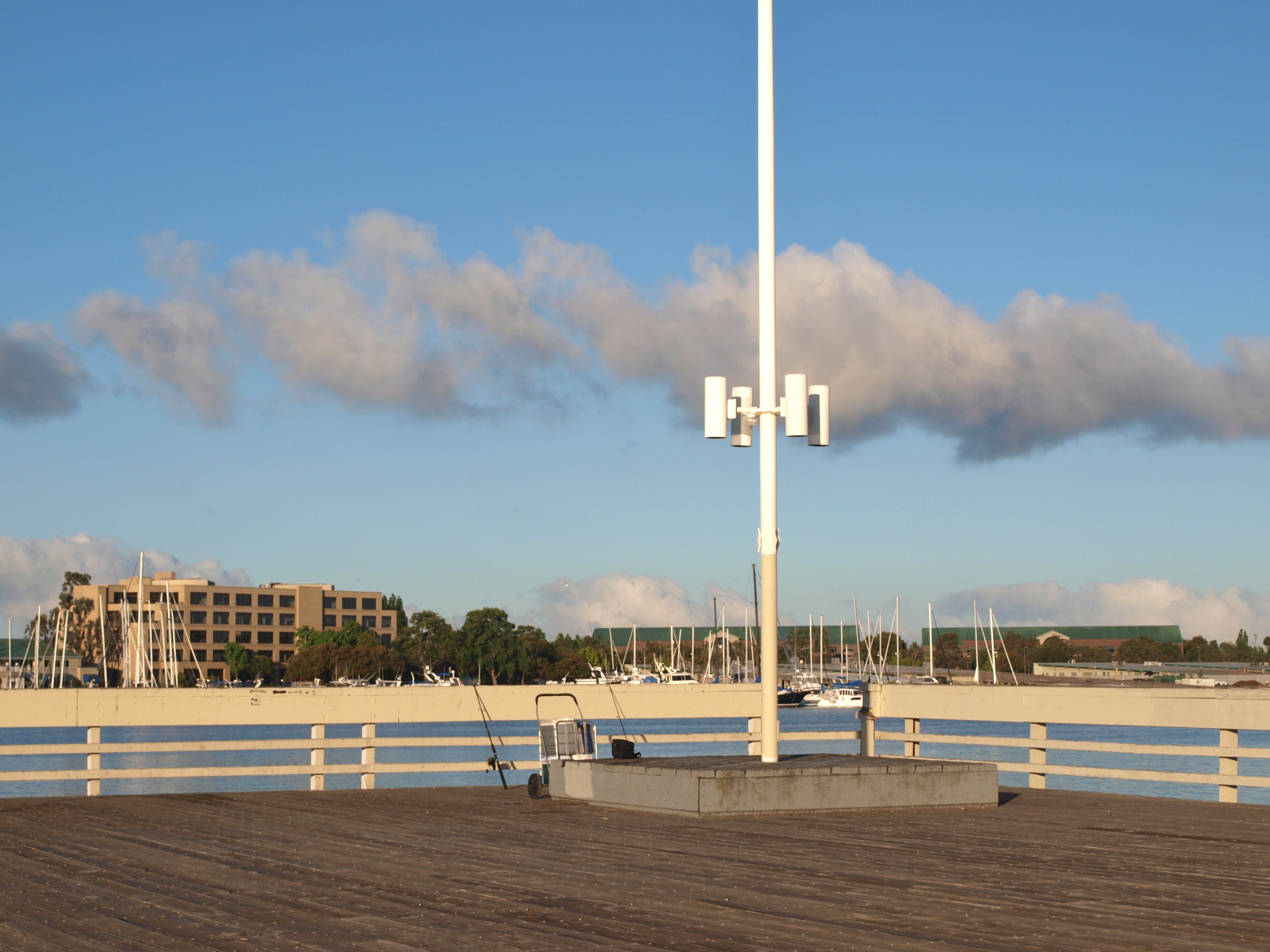 Environment. This park is at the edge of the Oakland Estuary and the tidal channel that connects it to Lake Merritt, a saltwater lagoon a half-mile downtown. Depending upon the tide and the time, the best being an incoming tide in the early morning or late afternoon hours, stripers will be headed past the pier to that channel and Lake Merritt. Of course striped bass are only one of the species available to anglers from the pier.

From the pier one can cast to the left toward the channel or straight out into the estuary; it seems to make little difference as to number of fish.

The bottom here is mud with rocks lining the shoreline under the pier. Unlike most piers, there is little attraction from the pilings themselves. The  pilings generally sit in only a few inches of water and they do not have a buildup of barnacles and other creatures that normally attract fish like perch to the piling area. 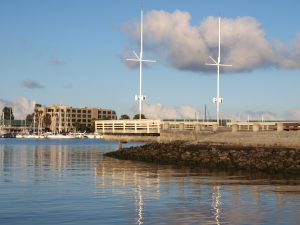 A HUGE new development is transforming the Embarcadero area to the south of Estuary Park. The $1.5 billion dollar, 65-acre, 3,100-housing-unit Brooklyn Basin project is considered the largest project in Oakland in over half a century. Plans include a 300,000+ square foot, seven-story building to be built just south of the Lake Merritt channel as well as 32 acres of new parkland and 200,000 square feet of retail space.

The developer’s plans include new streets and turning the Embarcadero into a landscaped parkway. The plans also call for several parks and waterfront areas including a small park to be built adjacent to the Lake Merritt Channel (south side), and a “shoreline park to be built atop a man-made platform above the water.” Another a promenade is to be built at Clinton Basin and a shoreline park will accompany a new marina. Included in the plan is a call for the addition of approximately two acres to Estuary Park.

The stated goal is to create a new neighborhood but how the entire project will affect this small park and pier is up in the air—some predict tremendous improvement, some predict the opposite. It’s pretty easy to predict that the traffic and the number of people in the area will certainly increase at an exponential rate. However, if the area can be cleaned up the increased traffic will simply be a necessary evil. 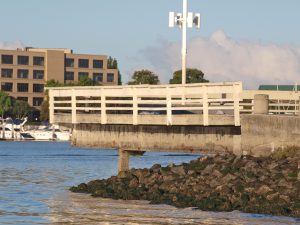 Seasonally, there will also be an influx of the larger perch: blackperch, white seaperch, pileperch, rubberlip seaperch and possibly even a few redtail surfperch. Most of these will be caught from late January to March, a little sooner or a little later depending upon the year’s weather pattern (and large schools of fish that can produce phenomenal fishing one day may quickly move out to deeper water as weather conditions change). The result of the move will be few if any fish for the tardy fishermen.

Schools of walleye surfperch, silver surfperch, or jacksmelt may visit at any time of the year although the surfperch seem to prefer the late spring/summer and fall months. Do remember the perch closure in San Francisco Bay that runs from April 1 to July 31. You can still catch shinerperch those months, and they make good live bait, but other species of perch are prohibited/forbidden/ verboten (you get the drift).

Fishing Tips. For best results with many cast straight out into the deeper waters. This will be the best area for jacksmelt, white croaker, flounder, halibut, sharks and rays. Shallower waters usually are better for the perch while striped bass,  although typically in shallower water, can also often be  further out.

For jacksmelt, use three small hooks under a float of some type. Make sure the top hook is a few feet under the surface of the water; use a sinker on the bottom that is heavy enough to help with the cast but light enough not to pull the float under the surface of the water. Typically the best baits for jacksmelt have been pieces of pile worms, small pieces of market shrimp, pieces of anchovy and strips of squid.

For the croaker use a high/low leader with size 4 or 2 hooks and either pieces of anchovy or pile worms as bait.

The kingfish (white croaker) hit best on cut anchovy fished on a high/low with size 4 or 2 hooks.

Some starry flounder may also make make an appearance (although it seems less and less are caught each year). Usually it’s during the winter months  in the winter and the tasty flatfish are best induced to bite by using a live pile worm on a live bait leader.

Although not a pier noted for halibut, it’s probably more due to a lack of halibut fishermen than it is to a lack of halibut. As usual, a key for the halibut is live bait. Net up or Sabiki-up some small live bait, typically a shinerperch, and then use a Carolina-type rig on the bottom just for the halibut. Artificial lures may also attract a halibut with swim-type lures usually being the preference of most locals.

For the sharks use a Carolina-type rig or a high/low with hook size based on the bait. If simply using a piece of fish you may want something as small as a size 2 while bigger pieces of bait or a whole squid may call for hooks from size 2/0 to 4/0. For the sharks use a bloody, oily or bloody and oily piece of a fish, i.e., anchovy, sardine or mackerel.  A jacksmelt cut in half will also produce a shark or two and locals will often use a small perch (several varieties) as bait. It’s the old match the hatch thinking using species of local fish that are common dietary meals for the sharks. Most of the sharks will be the smaller brown smoothhounds but larger leopard sharks are also common and some nearly five feet in length have been landed.

The bat ray have a preference for squid, a durable bait that will also survive the onslaught of crabs when they are attacking bottom baits. If specifically fishing for the “mud marlin,” be sure to have strong tackle, line that tests 40-pound or better, hooks size 2/0 or larger, and a net to bring the bat ray up onto the pier. Given that some of the bat ray approach or even exceed 100 pounds in weight, it’s also good to have a friend along to help with the netting of the fish. 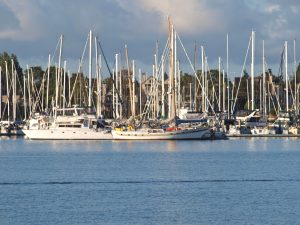 Several species of large perch can show up at the pier, especially in the late winter and early spring months. When they are running. a good bait to try is crabs which you can pick up at low tide under the rocks along the shoreline. The smallest crabs work best and remember to hook them (size 6 pr 4 hook) just near the edge of their shell so they stay alive. When using the crabs, cast closer to shore and fish the shallow water. If you can’t find any crabs, use the old standbys—pile worms, ghost shrimp, grass shrimp or piece of market shrimp.

Anglers seeking out striped bass  fall into three categories, those using cut bait, those using live bait, or those using artificial lures. All will work. Cut baits are generally fished on a high/low rigging with size 2-2/0 hooks. Best cut baits over the years have been sardine or anchovy. Live bait anglers, most often using a Carolina-type rig, like a lively shinerperch, small smelt, mudsucker (longjaw goby)  or bullhead (staghorn sculpin). Given that a couple of alien gobies from Asia, yellowfin gobies and chameleon gobies, have invaded local estuary waters, and that they will often show up on a line on the bottom, there should be a plethora of live bait available. The same Carolina-rig can be used with cut bait—typically with a whole anchovy and side of a sardine to attract the linesides. Those plugging for stripers use a variety of lures, everything from metal spoons to soft plastics and most seem to work if you know what you are doing. Check with local tackle shops to see what the latest “hot” lure is producing. 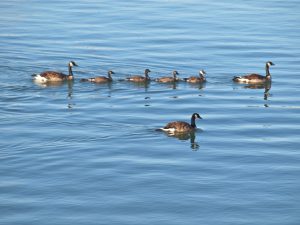 Date: April 13, 2002; To: Pier Fishing in California Message Board; From: montgomery burns; Subject: Oakland Estuary — what a strange day.

(Edited) One of the oddest fishing days I’ve had, if not the oddest… After studying for the entire night (yeah! my first all-niter!), I decided to take a break and go fishing to the Oakland Estuary, which is pretty close to my house. I packed my backpack and tied my rods to my bicycle. I left at around 6:30 A.M. to be on time when the tide changes… I arrive at the Estuary Park Pier and quickly set up my two rods, both baited for stingray.

About one hour passes when a homeless guy shows up and starts yelling at some girls who are rowing. He said that some girl named Chrissy, and two guys named Lobo and Jazz, did something to him but he didn’t want to say what it was. I figured he was one toot short of a loon, so I said “yeah” to whatever he said. After a while he even started saying that if he did something to the rowers that I would go to jail with him ’cause I was his accomplice… lol.

I ignore him and pay more attention to my rods when one starts getting a tap-tap-tap bite. The tapping goes on for about 20 seconds when all of a sudden it bends way down and has its butt lifted off the ground. I quickly grab it to find nothing on the other side of the line. I bait again, but that was to be the only good bite of the day.