Identification: Their coloring is silver with olive green mottling and bars on side; fins red with the caudal fin (their tail) pink to deep purple. The longest dorsal spines are longer than the dorsal soft-rays. More elongate than calico surfperch.

Size: To 16 inches and 4 pounds; most caught from piers are under a foot. The California record fish weighed 3 Lbs 7 oz and was taken at Kellogg Beach, Del Norte Co. in 2012. 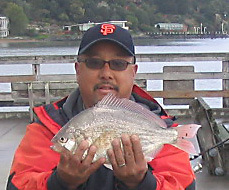 Habitat: Surf zone, shallow-water, sandy-shore, oceanfront areas; recorded to a depth of 24 feet. Although generally found in the open ocean, they enter sheltered estuaries and bays just before spawning in the spring and early summer. At such times, hundreds of fish may be concentrated in a fairly small area and it’s pretty easy for anglers to catch a limit.

Shoreline: One of the main fish for sandy shore anglers in northern California anglers. 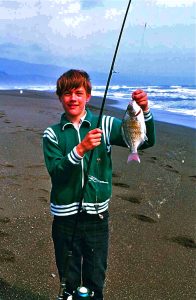 My son MIke with a redtail surfperch in Humboldt County

Food Value: Mild-flavored flesh with small flakes and a soft texture. The flesh is white colored and low in fat content. Can be cooked in any manner but most commonly fried.

Comments: Redtail surfperch, along with barred surfperch and calico surfperch make up the trio of large surfperch that dominate action on the surf end of most California piers; all are fine sportfish and fine eating.