Species: Triakis semifasciata from the Greek word tria (meaning the number three, like a triad) and Latin cis (meaning on the side), and the Latin fasciata (bundled) referring to the stripes. 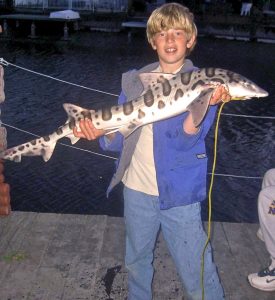 Size: Length to 7 feet and nearly 70 pounds; most caught off piers are less than four feet in length. The California record fish weighed 47 lb 1 oz and was taken off Palos Verdes, Los Angeles Co. in 2007.

Habitat: Most leopards are caught in bays but many are also caught in shallow, sandy-shore areas; they make an annual migration from the bays to the outer coast. Large schools mixed with smoothhound sharks are common in shallow water. Typical foods include large crustaceans and small fish. Found from the surf zone down to about 500 feet. 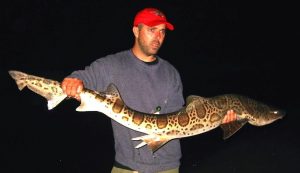 Bait and Tackle: Will take almost any bait but prefers squid, an oily fish like mackerel or anchovy, or live baits such as ghost shrimp or small fish. If specifically fishing for leopard sharks, use medium tackle, a size 2 to 4/0 hook, and heavy monofilament line – together with a net to bring the fish up onto the pier. Late summer and fall finds best fishing in the San Francisco Bay Area. 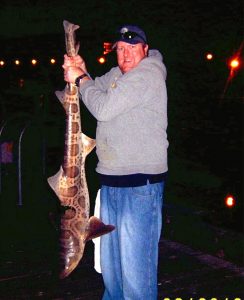 Food Value: An excellent, mild flavored flesh that can be fried, broiled or baked; considered one of the best eating sharks. Like all sharks, it should be bled and cleaned as soon as possible. It should also be kept cool and an overnight bath in the refrigerator (with just a couple of squirts of lemon juice) helps assure the good flavor.

Comments: This is one of the favorite sharks for most pier fishermen; it is attractive, reaches a good size, puts up a good fight, and is good eating. They also make great aquarium fish—until they begin to grow too big.

Perhaps one of the strangest stories concerning the fish had to do with the Unification Church (the Moonies) and how one of its pastors became the largest poacher of baby leopard sharks in history. Reverend Kevin Thompson of San Leandro’s “Bay Area Family Church”—and his “Ocean Church” fishing ministry—were accused of poaching roughly six thousand baby leopard sharks between 1991 and 2004. Thompson would pay fishermen $2 to $3 per pup then sell them to dealers for $20-$35. The dealers in turn were able to sell the pups for as much as $450 to customers throughout the U.S., Great Britain and the Netherlands. The estimated street value of the pups was $1.2 million dollars and a half dozen people were eventually indicted by a Grand Jury in Oakland. Thompson faced eight years in prison if convicted of the charges. Sounds a little light to me.