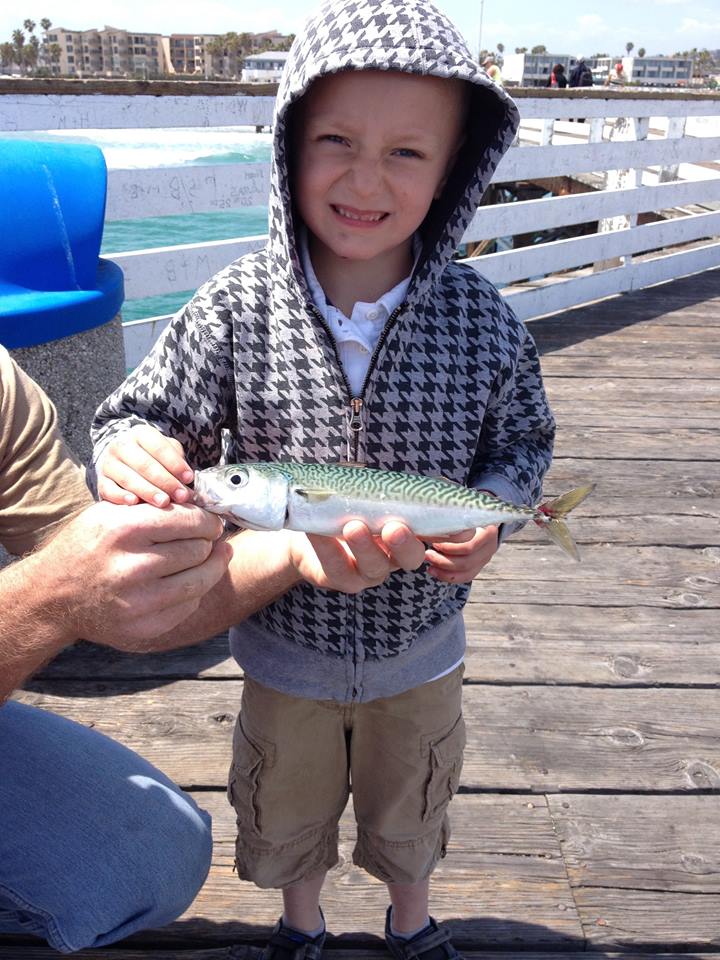 Pacific mackerel from the Crystal Pier

Identification: Typical mackerel shape with am elongated body tapering at both ends; identified by the long space between the dorsal fins, 25 to 30 black to dark green bars and spots across the back, and irregular spots on the sides.

Size: To 25 inches and 6 pounds. Most caught from piers are less than 18 inches. The California angling record fish weighed 2 lb 8 oz and was taken from the Horseshoe Kelp area near Los Angeles in 1995. The diving record fish was another 2 Lbs 8 oz, this time for a fish taken at Mission Beach in 2005. Both seem to be records waiting to be broken. 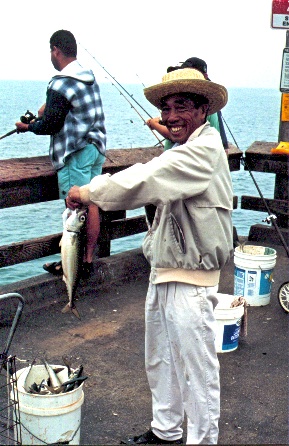 Mackerel from the Newport Pier

Range:  Pacific and Indian Oceans. In the eastern Pacific found from Chile, Islas Galapagos, and Gulf of California (some sources say Bahia Banderas) to the western Gulf of Alaska. Common from Gulf of California to Vancouver Island, British Columbia (periodically).

Habitat: Coastal pelagic (open ocean) to epipelagic (upper open ocean) or mesopelagic (the middle pelagic or twilight zone, the part of the pelagic zone that lies between the photic epipelagic (uppermost 260 feet of water) and the aphotic bathypelagic (deeper area with little or no sunlight). Generally found from the surface down to about 100 feet although recorded to a depth of 984 feet deep. Feeds mainly on euphausids (small, shrimp-like crustaceans, i.e., krill, usually 1/8 inch to less than an inch), squid, and young fish. 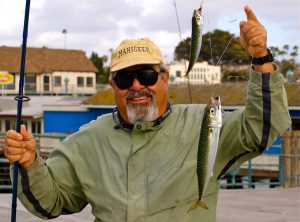 Piers: Common at most piers in California north to and including those in Monterey Bay (at more northern piers in late summer or fall or in warm-water years). Best bets: Imperial Beach Pier, Oceanside Pier, San Clemente Pier, Balboa Pier, Newport Pier, Redondo Beach Pier, Redondo Sportfishing Pier, Hermosa Beach Pier, Manhattan Beach Pier, Malibu Pier, Stearns Wharf, Goleta Pier, Gaviota Pier and Monterey Wharf #2. Generally uncommon at piers north of Monterey Bay although recent years have seen them enter San Francisco Bay. In 2009 they were taken at many Bay Area piers including most along the San Francisco waterfront as well as several in the East Bay. In September of 2014 one was taken at the “Kids Fishing Derby” at the Trinidad Pier north of Eureka, roughly 75 miles from the Oregon border. The next year, on October 3, 2015, I caught one at the Citizens Dock in Crescent City, about 20 miles from the Oregon border. Both of the latter fish were far north of their usual habitat. 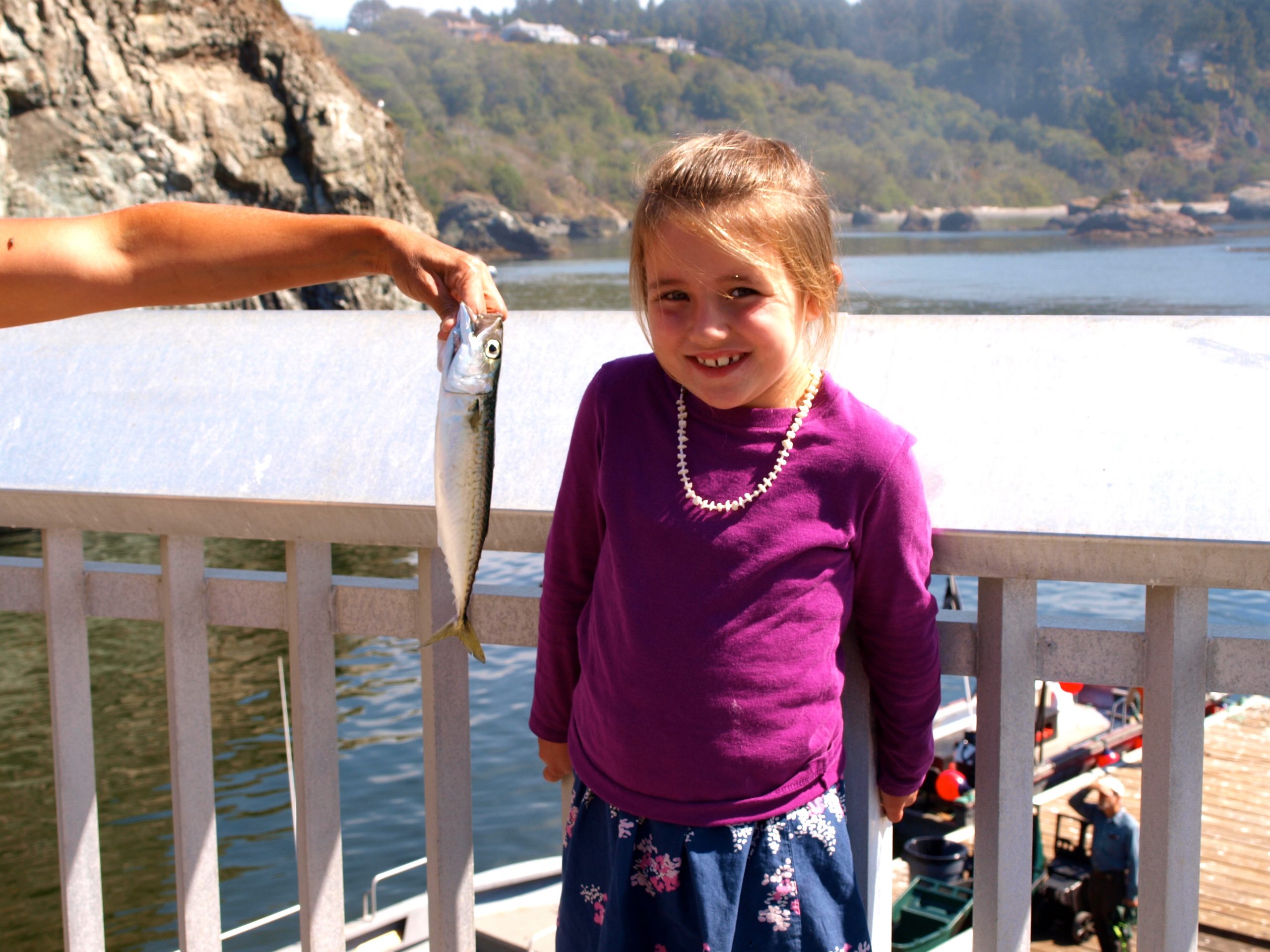 Pacific Mackerel caught at the Kids Fishing Derby on September 13, 2014 at the Trinidad Pier in far northern California

Boats: One of the mainstay fish for southern California boats and some years caught north at least to Monterey Bay. 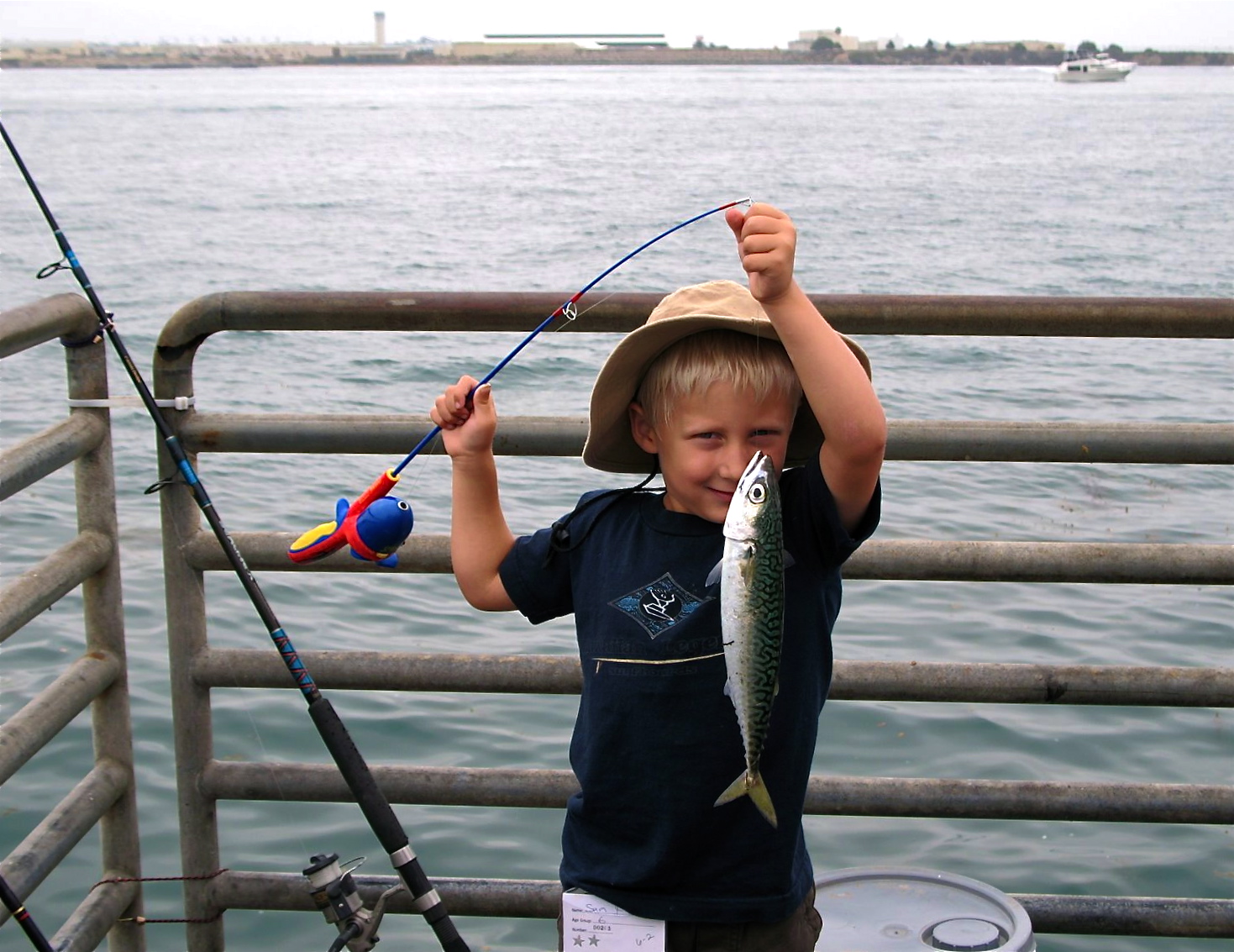 Bait and Tackle:  Caught on a wide range of baits and artificial lures. A very simple method is also the most common; it is especially useful when fishing from a pier that sits down near the water. Simply attach a size 4-2 hook to the end of the line, put a small split-shot sinker a couple of feet above the hook, and use a small strip of squid, 2-3 inches long, or a bloody strip of mackerel, as the bait. The rigging can be used as is, or used in conjunction with a small float so that the bait stays a few feet under the surface of the water. If available, live anchovies are also excellent bait. When a school of mackerel is in one of their ravenous moods, a Sabiki/Lucky Lura-type bait rig can be deadly and will often produce a fish on every hook (which can lead to tangles and loss of the rig). The most fun can be had with a light outfit and a small artificial lure—a light bonito-type jig or even a cast-a-bubble with a bucktail fly. Generally the bait, whether live bait or cut bait, should be kept moving. A technique that often works is to cast out a high/low leader baited with cut anchovy or piece of mackerel, let it sink toward the bottom, then immediately begin a medium speed retrieve; mackerel will often hit it on the way up, usually just before it gets to the surface. At times, when a school is really hungry, the mackerel will hit on anything and everything (although I think pieces of mackerel are the best bait) and this leads to the common term: “mac attack.” It’s an appropriate title.

Food Value: Mackerel are a fairly robust, strong flavored fish with a soft, oily texture, a fact that stops some people from eating them. Too often they wind up being used as bait (especially for other mackerel and catfish), as fertilizer, or simply being thrown away. At the same time many people find them delicious. Typically the difference is due to the way they are handled and cooked. Being an oily fish, the flesh can quickly deteriorate and soften. Put them on ice after capture, keep them cold, and use within a couple of days, and you will be starting with a much more palatable type of flesh. In addition, you can remove the darker (muscle) flesh from the side of the fish (the lighter the flesh the more mild). Lastly, if you want to reduce the strong flavor, cook utilizing methods that remove oil from the flesh—broiling and barbecuing being the best. If you have a smoker they can also be made into tasty jerky. It’s recorded that in England there has been a special dispensation in existence since the seventeenth century that allows mackerel to be sold on Sunday. Thus the quickly spoiling fish are not wasted. It simply affirms the necessity of keeping them cold and eating them while fresh. The flip side is that some ethnic groups prefer the strong flavors. They know that using spices that complement the flesh produces a tasty and favorable piece of fish. Still, mackerel may not be the fish for those raised on the mild tasting, white-fleshed fish used for fish and chips (cod, halibut, rockfish, etc.). 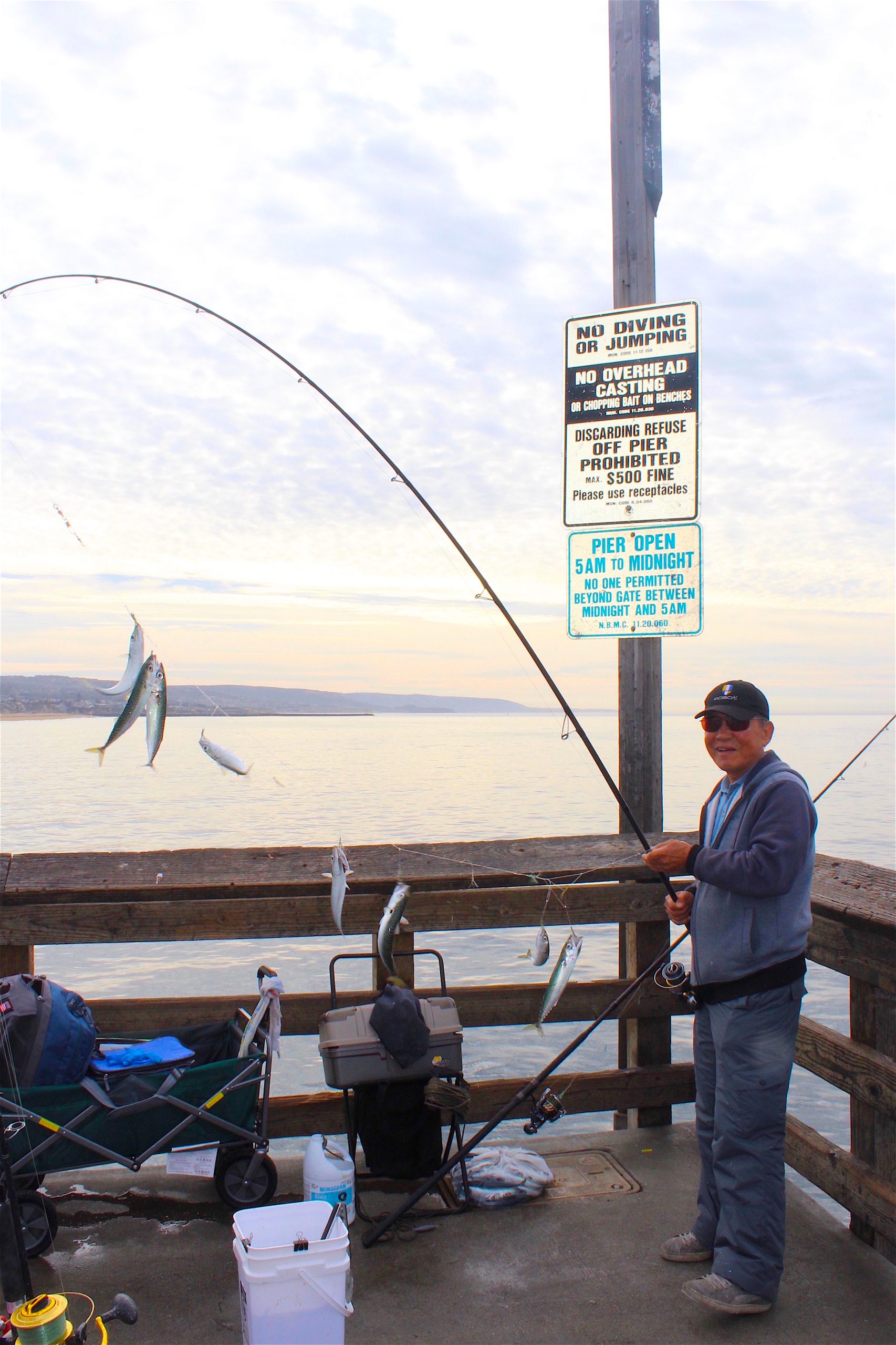 Overkill (in my opinion) at the Balboa Pier

Comments: Mackerel numbers seem to go in cycles; for years they will be fairly uncommon and then there will be years when they will be at nearly every southern California pier. Recent years have seen huge catches. Unfortunately many of these mackerel go to waste. I have seen people who loaded buckets (or gunnysacks) with mackerel day after day at their favorite piers. I sincerely hoped they used them. Pacific mackerel are pretty little fish and terrific fighters for their size. Seafood, A Connoisseur’s Guide and Cookbook by Alan Davidson, comments on the “attractive and flashy appearance of mackerel,” noting that the “French name maquereau also means ‘pimp’” and that “in the past mackerel was a term for dandy in England.”