Species: Girella nigricans (Ayres, 1860); from the French word girelle (a derivative of julis, an old word used to denote a number of small wrasse in Europe), the Latin word nigr (dark) and the Greek word ikanos (becoming, in reference to its pleasing appearance). 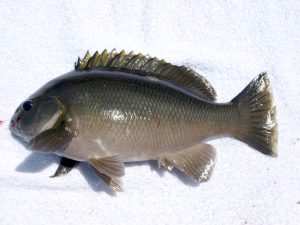 Identification: Opaleye are perch-shaped but heavier bodied. Their coloring is usually dark olive green, usually with two light spots at the base of the dorsal fin; occasionally pale green while some almost all white fish have been observed. Eyes are distinctive: large and an opalescent, blue-green color.

Size:  To 26 inches and over 13 pounds. The California angling record fish weighed 6 lbs 4 oz and was taken near Los Flores Creek in Malibu in 1956. Another 6 Lbs 4 oz opaleye was reportedly caught by David Douglas at the Santa Monica Pier in 1964 (Pasadena Independent, January 16, 1964). It was never officially recorded. The diving record fish weighed 13 Lbs 7 oz and was speared by David Williams at Aliso, south Laguna Beach, in 1964. Unfortunately, most opaleye caught from piers are less than 14 inches in length. 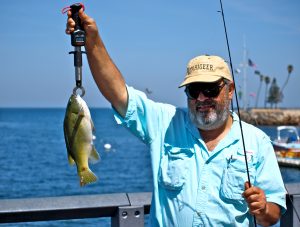 Piers: Can be caught from almost any pier in southern California located near rocks, reefs, or kelp. Less common north of Point Conception although taken occasionally at piers in Morro Bay. Uncommon north of Cayucos but a population seems established near the Coast Guard Pier in Monterey. Considered rare north of Monterey. Best bets: Shelter Island Pier, Ocean Beach Pier (inshore), Oceanside Pier, Oceanside Harbor Pier, Dana Harbor Pier, Cabrillo Pier (jetty side), the Green Pleasure Pier and Cabrillo Mole (Avalon), and Paradise Cove Pier. Most of the fish caught at SoCal piers are fairly small to mid-size opaleye. The exceptions are the two piers in Avalon that almost always have good-sized fish available for the opaleye-seekers.

An opaleye I caught at the Cabrillo Mole

Shoreline: One of the main goals of rocky shore anglers in southern California.

Boats: An inshore species rarely taken by boaters unless targeting them at places such as jetties and breakwaters.

Bait and Tackle: Some anglers specialize in opaleye, and many of them swear that moss or frozen peas are the best bait. I’ve actually caught more on ghost shrimp but I must admit that I’ve watched, many a morning, while a group of opaleye “pros” from Los Angeles (I recognize them by now) caught opaleye after opaleye and they almost always use moss as their “bait du jour.” I think all three baits are excellent for opaleye (although the ghost shrimp are more expensive and sometimes hard to find). Fresh mussels, pile worms, bloodworm, and small rock crabs also make good bait. I also managed to hook a few opaleye using garden snails during an experiment testing different baits at Catalina in 2005.

Food Value: A very good eating fish that is mild flavored, small flaked, firm textured, and low in fat content. It is suitable for many forms of cooking but most commonly fried or steamed whole. 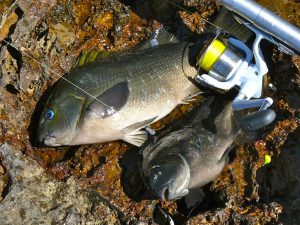 Opaleye caught from the rocks on the Palos Verdes Penninsula

Comments: Primarily herbivores (vegetarians), opaleye eat a variety of plants including feather boa kelp, giant kelp, sea lettuce and coralline algae. Evidently they also grab organisms attached to seaweed as they’re making their rounds, tasty little items like tube worms and red crabs. Opaleye are a favorite of many anglers; they’re hard to hook but once hooked put up a very good fight for their size.

The crystal-clear waters at Avalon present quite a challenge for the sagacious, line-shy opaleye. Big schools of 2-4 pound fish hang around the Green Pleasure Pier and the Cabrillo Mole but they can be very hard to catch. They seem more cautious of line at the Green Pleasure Pier but if you use a light line, perhaps 2-4 pound fluorocarbon, you might get them. (Actually, to be fair, I catch them every year at the Pleasure Pier and I usually am using 8-10 fluorocarbon). Of course the 1,794 ropes, tangled lines, pilings and yellow submarines that surround and hang under the GPP might also get your line.

At the Mole it’s the long fronds and blades of the giant kelp that sway (tidally) in or out near the railing. If the opaleye are allowed to encircle the kelp it’s pretty much over. As soon as they are hooked apply pressure and try to keep them coming toward you while having a person ready with a net. You need to use light line but can also pay the consequences if you’re unwilling to apply enough pressure. 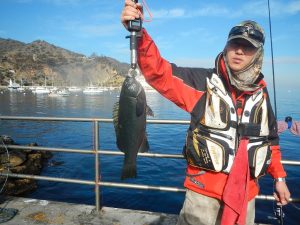 Big opaleye from the Cabrillo Mole

The opaleye “pros” who come over to Catalina from Los Angeles take the ferry over for one day, fish exclusively at the Mole, fish for one species—opaleye, and are almost always successful (coolers are crammed with fish). You learn from such experts and a few things should be mentioned.

Second is that if you want to fish the correct depth a float is desirable and long slip-line floats are the preferred tackle for the opaleye hunters.

Third is when you see the float go down, strike and, as mentioned, try to keep the fish out of the kelp.

Fourth is that light line (preferably fluorocarbon) and small hooks (size 6 or smaller) are key.

Opaleye, especially the older, larger fish can be frustratingly difficult to catch. Chum with peas and a whole school may come up to check out the bait and fish after fish will approach the bait before turning away in seeming disapproval. But, the challenge of outsmarting the fish is part of the fun.