Species: Scorpaena guttata (Girard, 1854); from the Greek word scorpaena (scorpion, referring to the poison spines), and the Latin word guttata (a form of small drops or spotting). 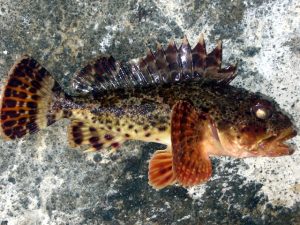 Identification: Typical rockfish shape, heavy-bodied and with strong head and fin spines. Their coloring is red (deeper water) to brown (more shallow water) with dark spotting over the body and fins. Fin spines are venomous and can cause a very painful, although not fatal, wound.

Size: To 18.5 inches, although most caught from piers are less than 12 inches long. The California record was a fish weighing 3 lb 0 oz. It was caught at the Silver Strand Beach in 1997.

Range: Uncle Sam Bank, central Baja California, and the Gulf of California, to Santa Cruz. They are uncommon north of Point Conception. 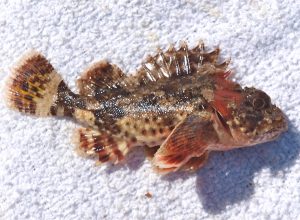 Scorpionfish from the Oceanside Pier

Habitat: Most abundant in shallow rocky environments such as rocky reefs, sewer pipes and wrecks; frequently found in caves and crevices. Some are also found on sand. Found in intertidal, fairly shallow water down to 626 feet. May travel over 200 miles in annual spawning migrations (spring and early summer) that see them form large spawning aggregations on or near the bottom (at a variety of depths). Considered a nocturnal species that feeds mostly at night. 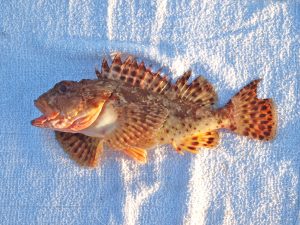 Boats: A common catch by boaters in southern California, especially those fishing at Catalina and the Horseshoe kelp area of Los Angeles.

Bait and Tackle: Scorpions are carnivorous, ambush predators that are primarily nocturnal, feeding at night. Their main diet consists of small crabs, octopus, shrimp, and small fish. A high/low leader with size 4 hooks baited with squid or shrimp seems to work best although they also really like ghost shrimp. Still, I’ve caught them on cut anchovies, strips of mackerel, pile worms, and one on a live queenfish that seemed almost as large as the scorpionfish; they’re not too discriminating as far as food.

Food Value: An excellent eating, mild-flavored, and densly textured fish that is low in fat content. I like it fried although they are a favorite fish for sushi, and are often steamed whole; they command top prices when fresh fish are available. 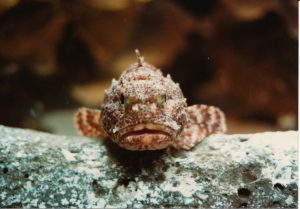 Comments: Handle with extreme care. California scorpionfish are the most venomous member of the family found in California. If handled in a careless manner and a puncture wound does occur there will usually be pain (sometimes intense) and perhaps swelling that should subside after a few hours. If possible, soak the affected area in hot water as soon as practical (since the hot water alters the toxin and makes it less harmful). Multiple punctures may require doctor’s attention or even hospitalization. 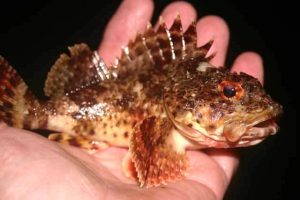 The wrong way to handle a scorpionfish — even a small one.

The worst story I ever heard of such multiple punctures concerned a middle-aged angler fishing from a boat near Catalina. This lady had caught upwards of a dozen scorpionfish that were dutifully deposited into her gunnysack. Unfortunately, many of the long spines were protruding from her bag when a heavy wave caused her to lose her footing and to fall, bottom-first, onto the bag. The result was butt-porcupine and a helicopter trip back to a hospital.

Although studies showed a decline in population before 1980, they seem to have increased and today have a healthy population.

A related species is the rainbow scorpionfish, Scorpaena xyris. It is uncommon in SoCal waters but occasionally seen at the Channel Islands including Catalina. Rumors of capture of the fish at the Cabrillo Mole in Avalon had occurred over the years and finally, in August 2021 a new report included a picture. 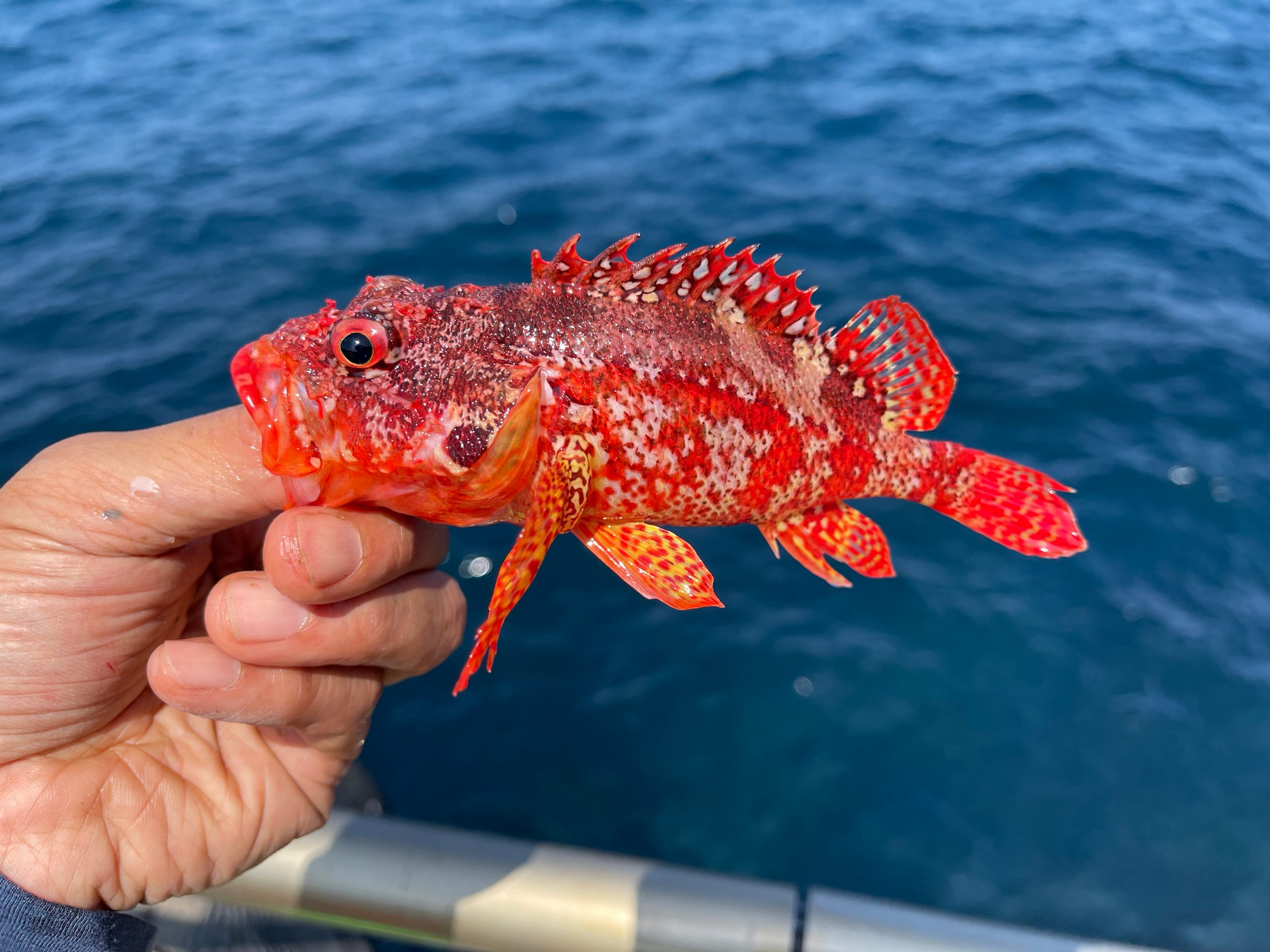 Fish caught by and photo supplied by Evan Yeh.