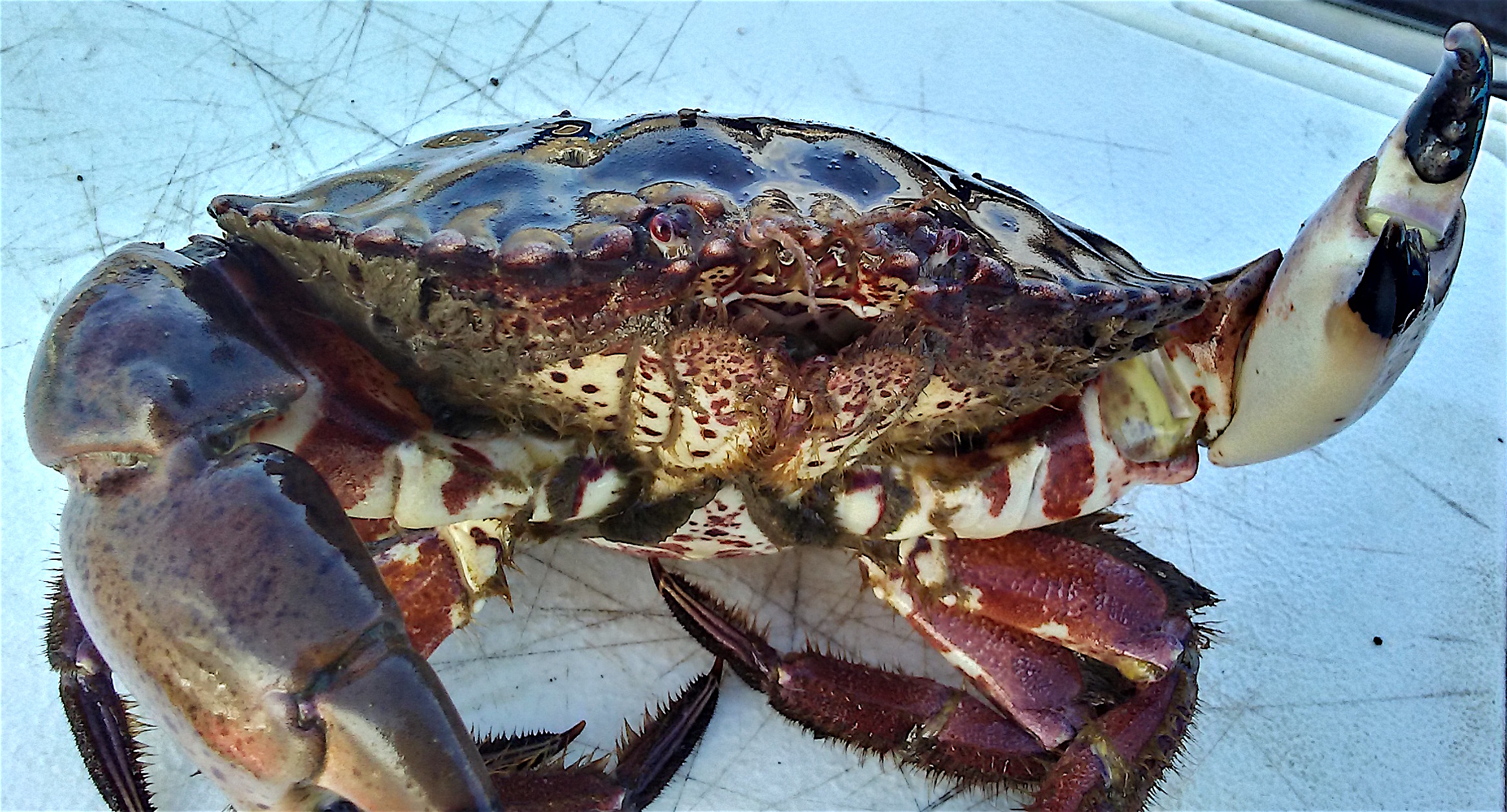 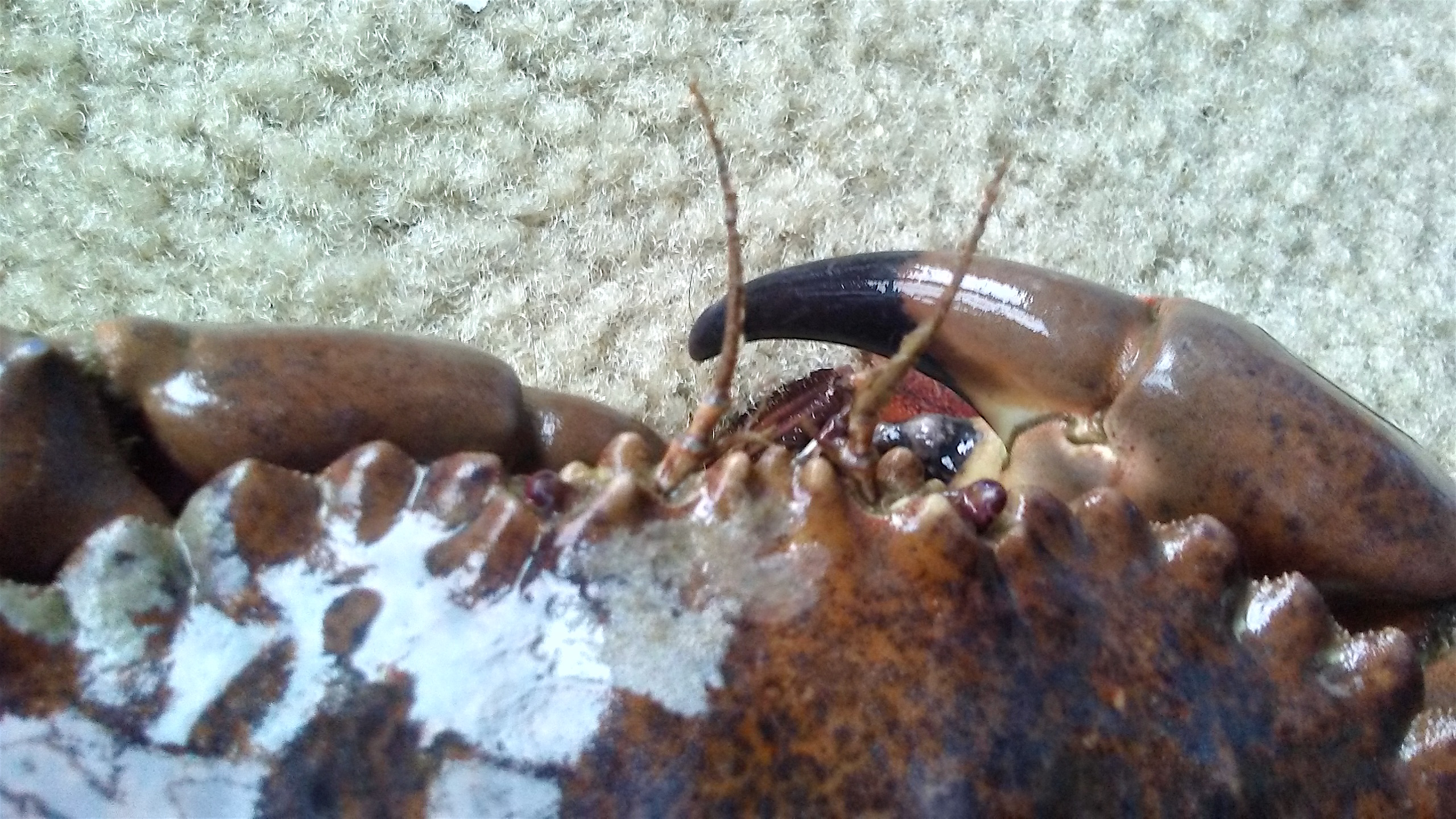 Species: Cancer antennarium (Stimpson, 1856). (Alternate proposed scientific name Romaleon antennarium).  Antennarium — Latin for “antennae” in reference to the large antennae, larger than those of other species in the family. 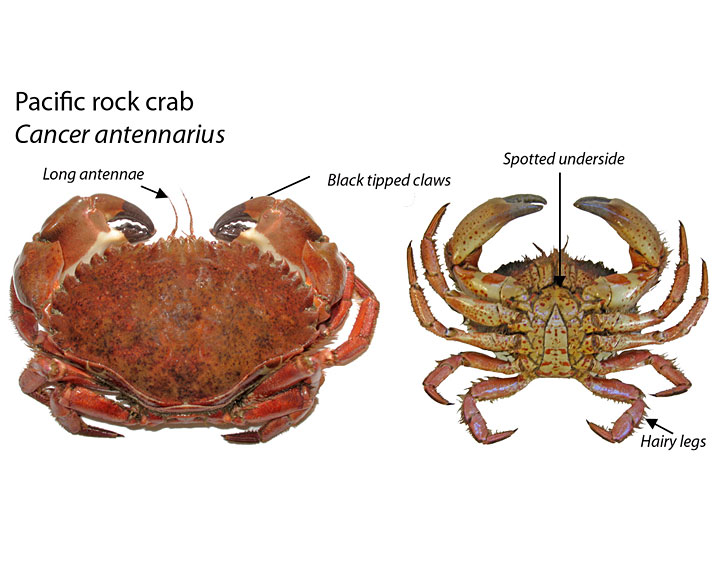 Identification: Rock crabs have a wide, hard shell with black-tipped pincers on claws that are large and smooth. Distinctive are the antennae that begin between the eyestalks and are the longest of these various species. The tip of the last segment of the tail flap is pointed in both male and female. The coloring is generally medium to dark red-brown or orange, usually mottled with a lighter grayish tinge. The undersides are yellowish white with a number of small distinct red spots that help distinguish this species since they are not seen on the other species. In the female, the red spots on the tail flap are usually blocked out by a general red coloration, but the spots can be found on the legs and the underside of the shell. Red crabs have red blotching’s on the underside but not the distinct spots seen in rock crabs. 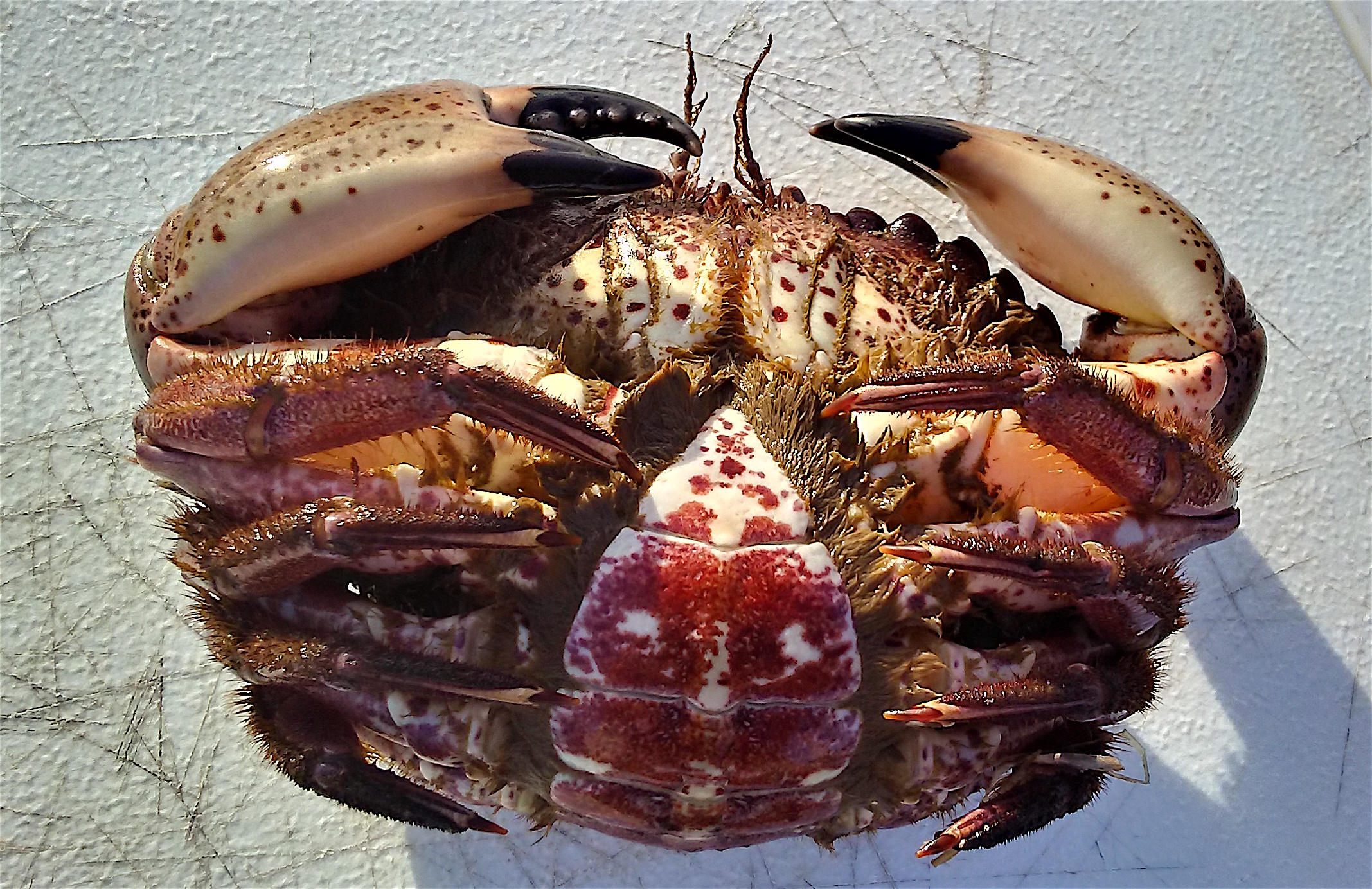 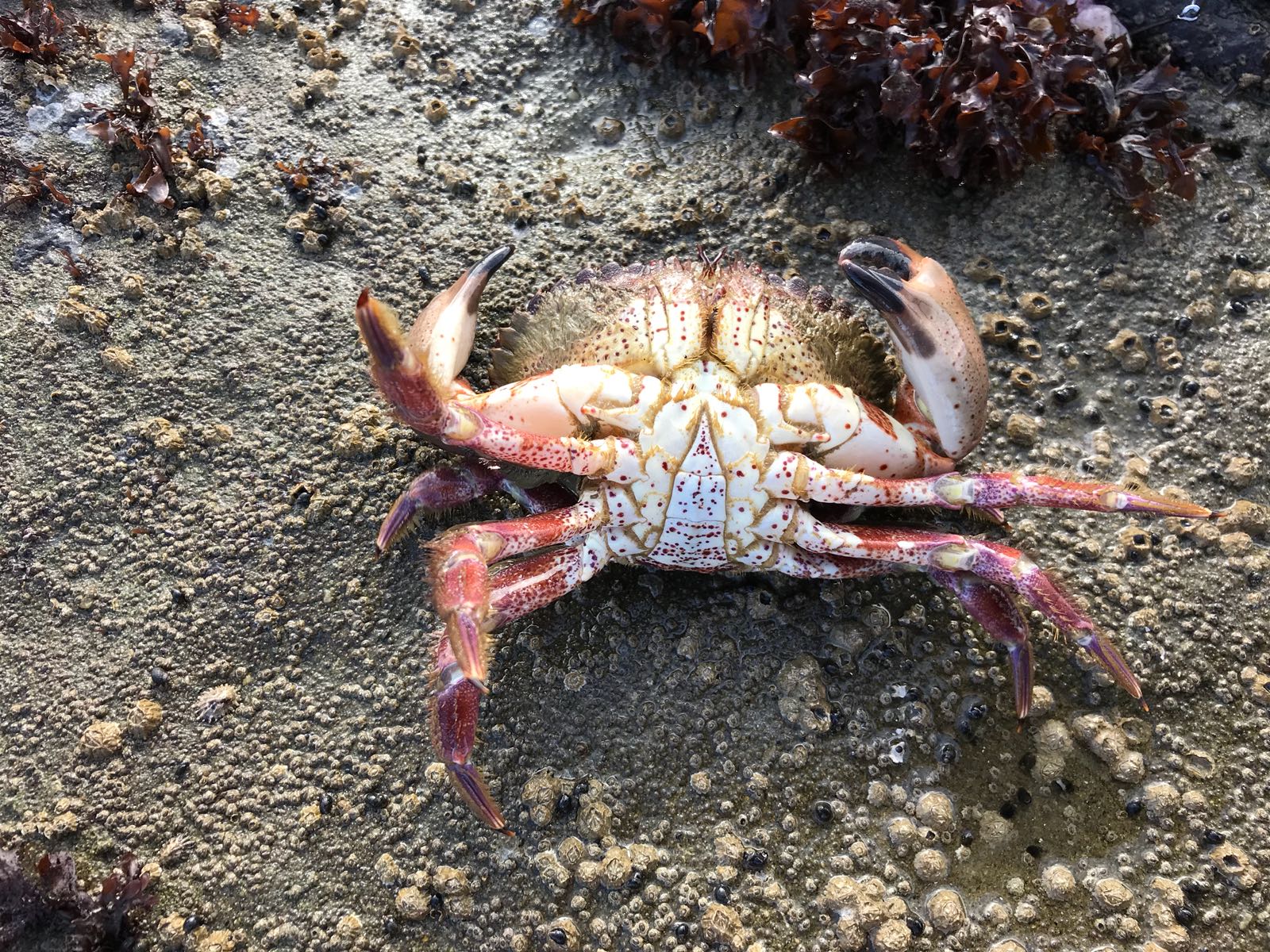 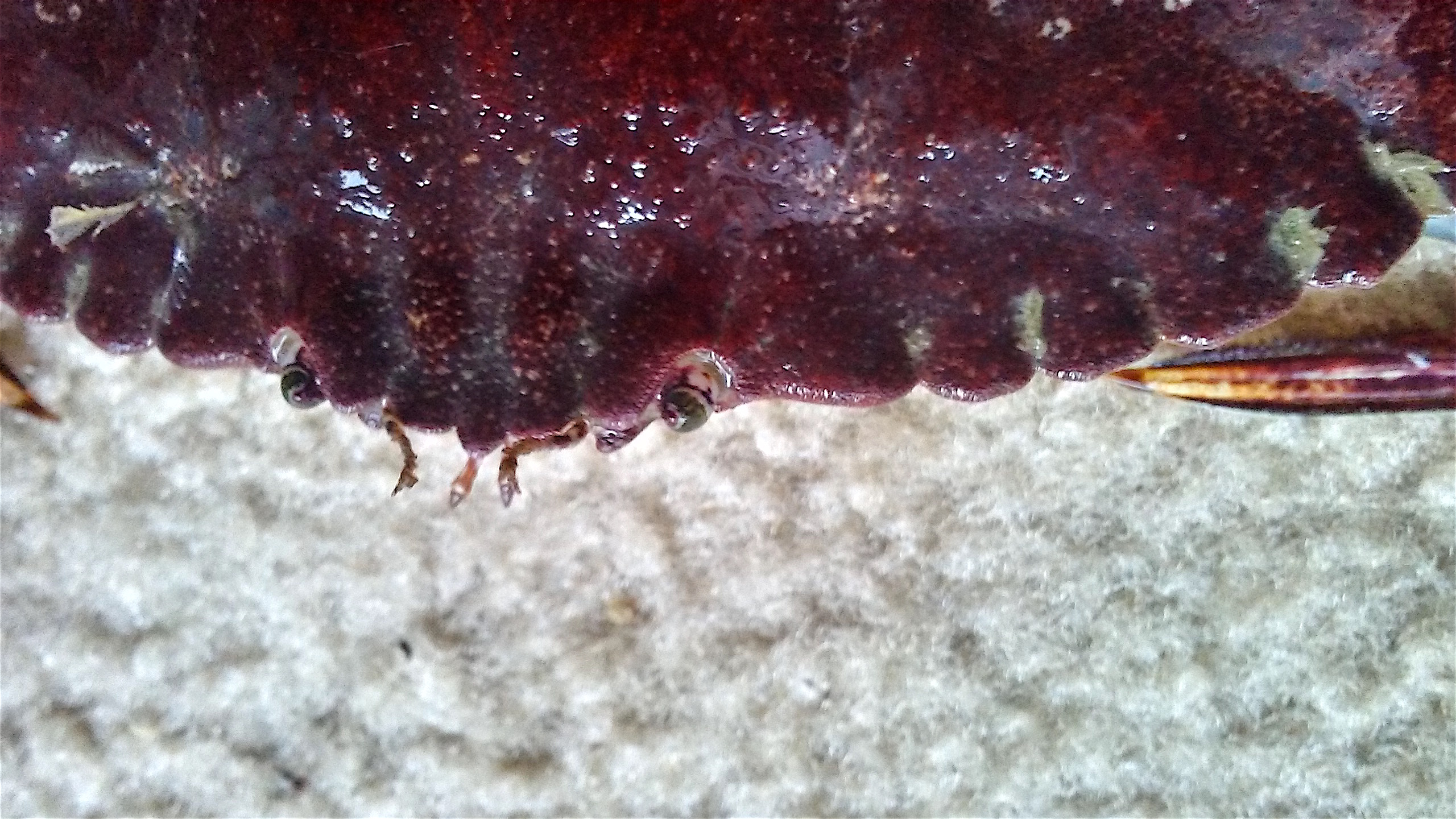 Size: Males to 7 inches across the back, females to 5.8 inches. 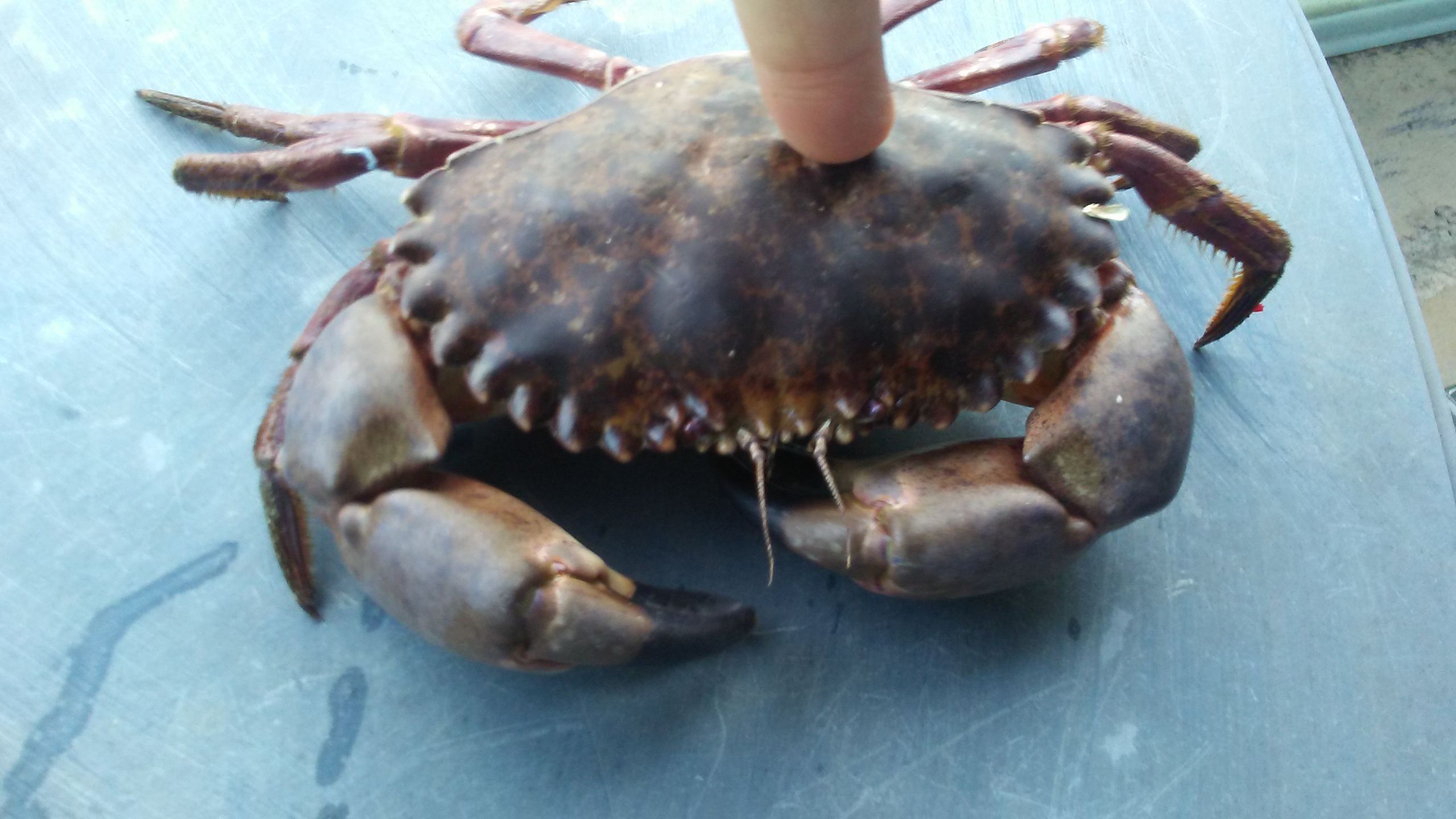 Habitat: Although recorded from the low intertidal zone down to a depth of 330 feet, primarily lives in shallow inshore environments—on sand, mud, gravel, and rock substrata in estuarine and coastal shelf areas. Rock crabs do not tolerate brackish conditions as well as some other crabs. Rock crabs feed by means of scavenging and predation with a large diet that consists of bivalves, snails and echinoderms, as well as other crustaceans such as hermit crabs. Sensitivity to the odor of food serves as a major means of locating food. Many of the small rock crabs seen snapping and seemingly blowing bubbles, in tidepools and around rocks, will be small members of this species. 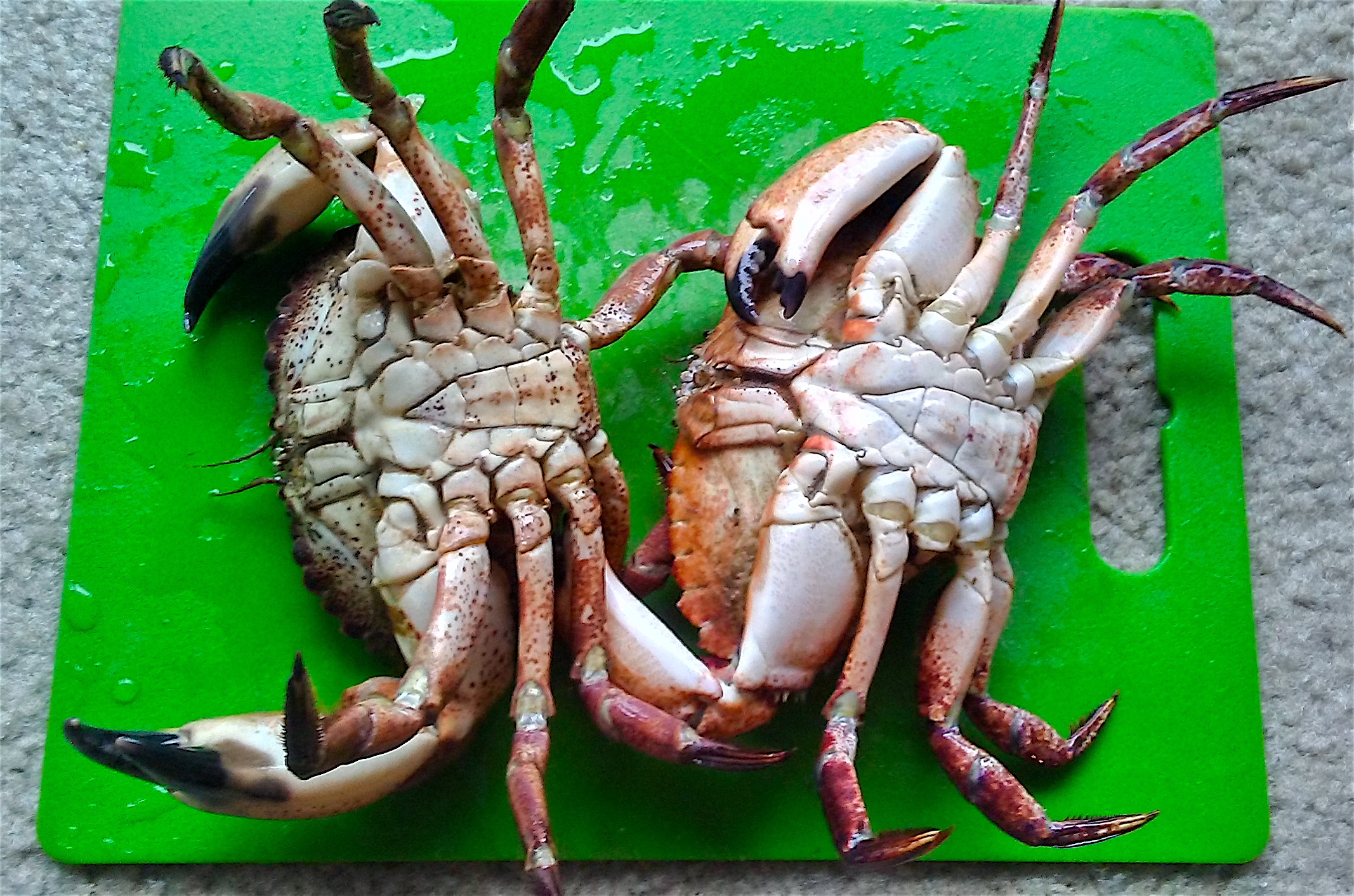 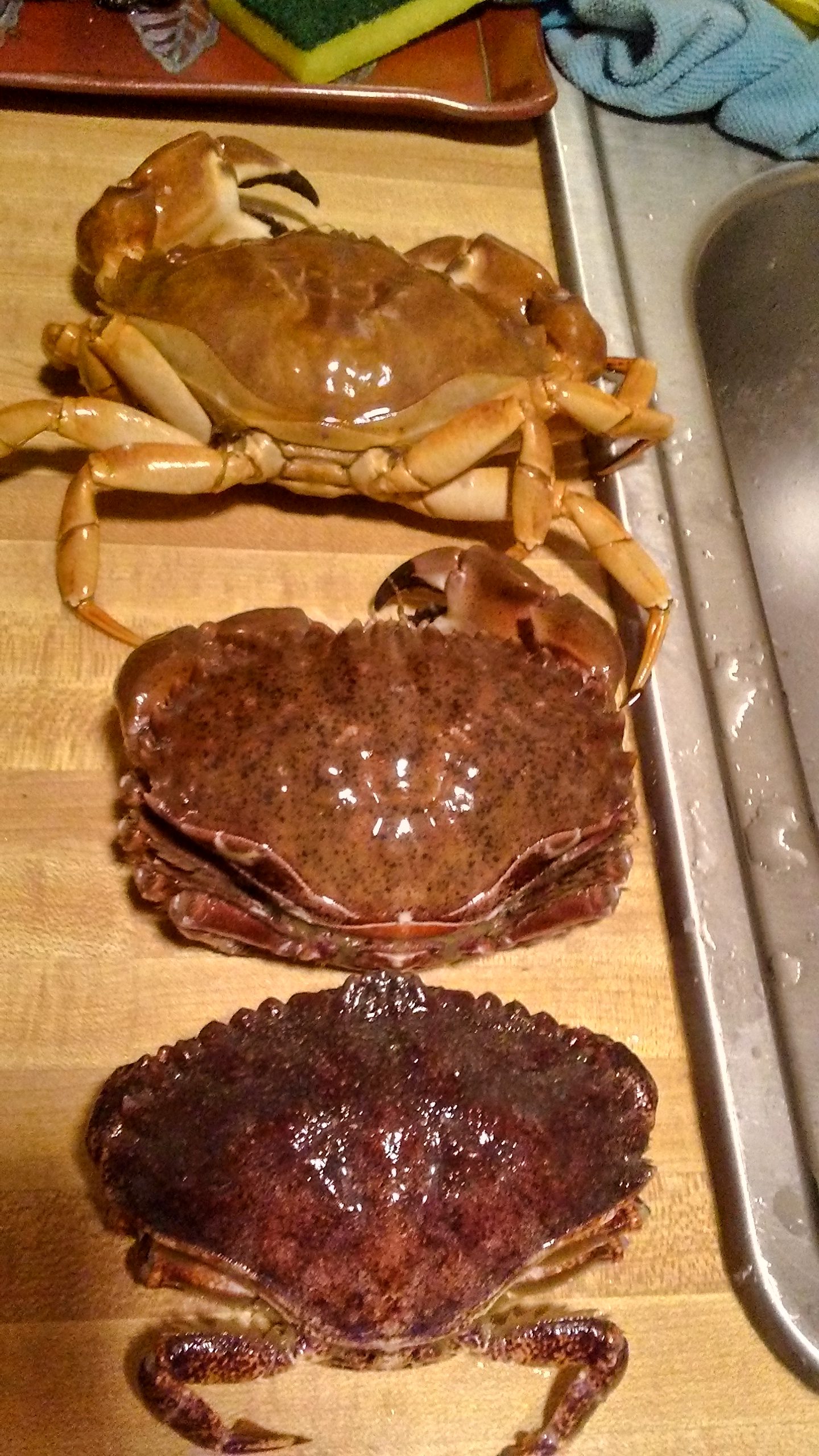 A trifecta of crabs caught by Martin Bragado at the Pacifica Pier. A yellow rock crab, a brown rock crab, and a red rock crab.

Shoreline: Readily available inshore but the rocky areas they typically inhabit make it hard to use both hoops and snares. 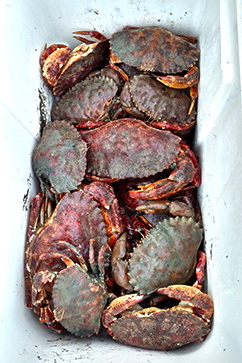 Boats: Available to boaters in rocky areas but generally they take a backseat to those seeking out Dungeness crabs.

Food Value: Although sport fishermen are able to catch large numbers of these crabs, commercial fishermen land few. Rock crabs yield a lower amount of flesh than Dungeness (almost all is found in the claws and legs) but the meat has a slightly sweet, delicate flavor that is delicious.

See the following for more information and recipes:

Comments: Since Dungeness crabs and red crabs reach the largest size and yield the most meat, they are the preferred species. However, rock crabs are the most numerous crab caught by pier anglers in central California. Note: the proposed species name is Romaleon not Romulan, these crabs did not come from the planet Romulus nor are they related to Vulcans. 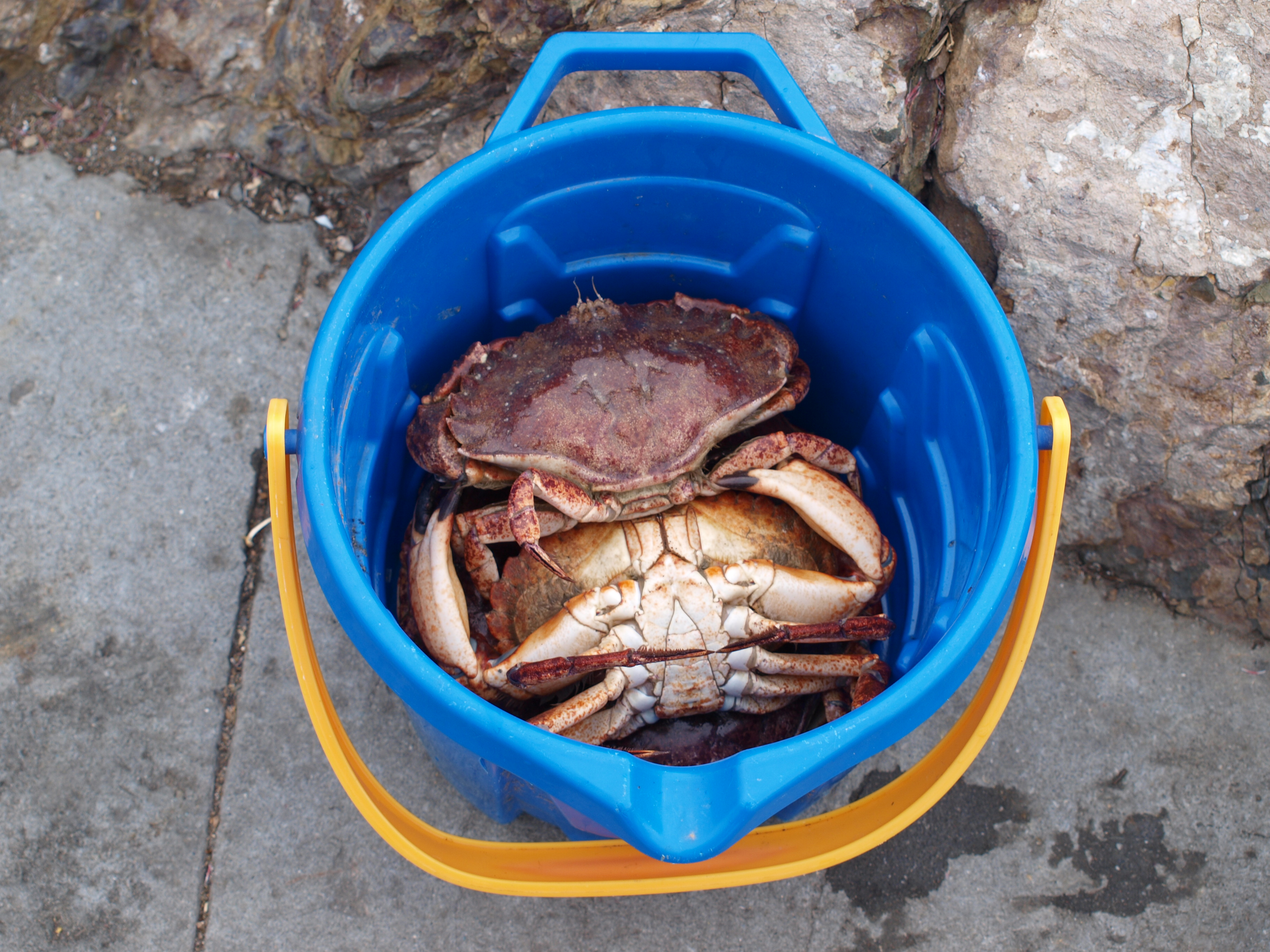 Crabs are sometimes hard to distinguish from a picture. This pail of crabs at the Elephant Rock Pier appears to contain both brown rock crabs Cancer antennarium and red rock crabs Cancer produtus but it’s hard to tell. The top crab although having long antennae characteristic of Antennarium seems to have the carapace of a Produtus. The one on its back, given a lack of spots, definitely seems to be a Produtus.