Nearby stood the stadium that made this point infamous — Candlestick Park (OOPS! 3Com Park at Candlestick Point) — “The Stick.” Why infamous? Because of the fog and the cold, blustery, hurricane-like winds that could whip through the area, knock pitchers off the mound in baseball games,  and drive visiting players (baseball and football) just a little daffy. Not to mention nearly freezing the fans. The City of San Francisco is located in the Golden Gate Gap, a breach in the coastal mountains and the main reason why winds can blow into the city unchecked. Candlestick Point is located in the middle of the Alemany Gap, the largest wind gap in this very, very windy area to the south. 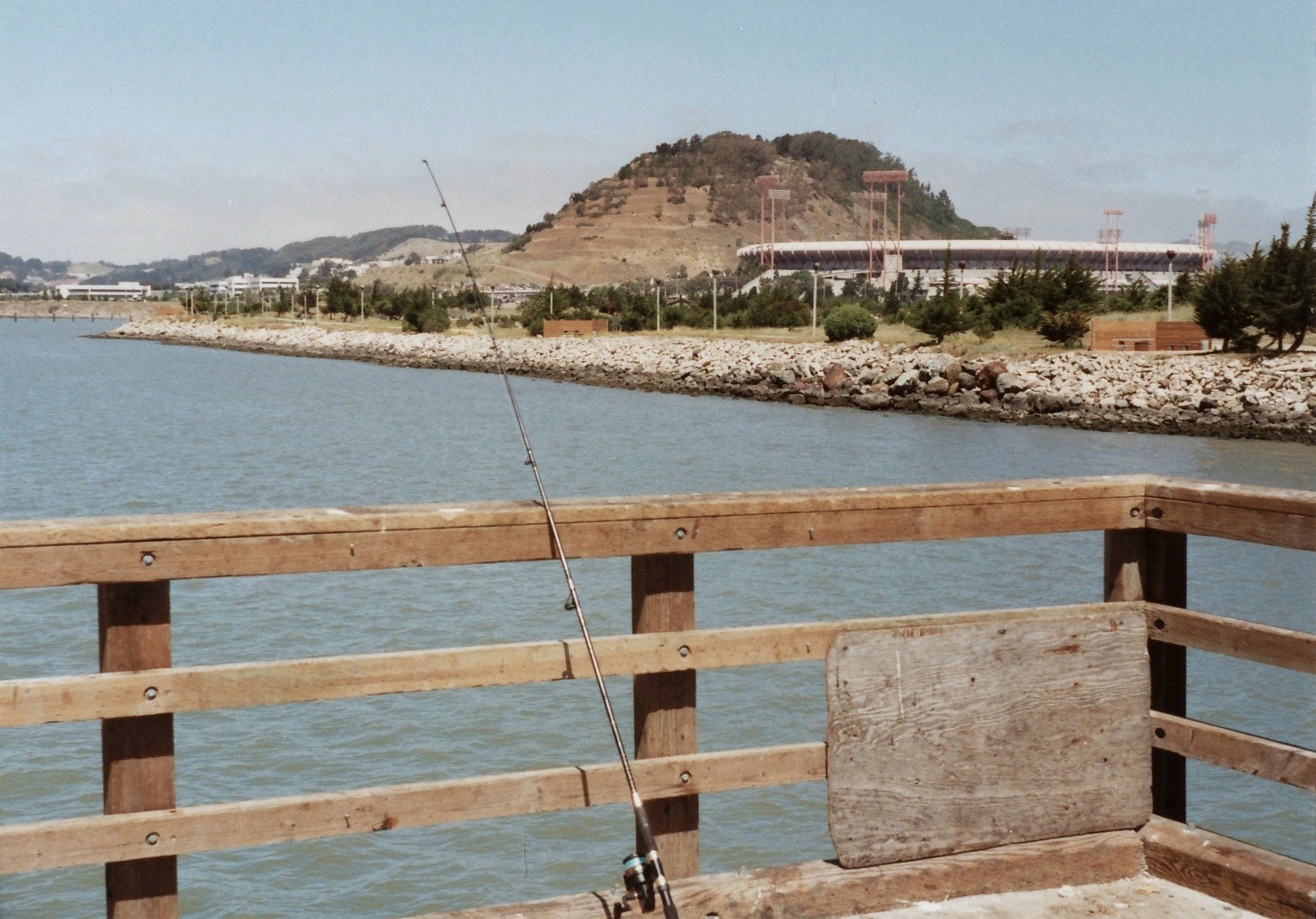 Candlestick Park is now history — gone but not forgotten

Those same winds can affect the fishing, in fact at times make it nearly impossible.  However, the Point has been a favorite of local anglers because of the traditionally better than average fishing offered at the small pier out at the end of the point, fishing that can include large striped bass and occasional sturgeon.

In addition, the two piers located here are in California’s first urban state park, Candlestick Point State Recreation Area. The 170-acre park has attractive hiking trails, picnic areas, nature areas, and an exercise course. It is also a favorite of wind surfers, and most days’ visitors will be able to watch the colorful surfboards as they zigzag back and forth with the wind.

Environment.  There are two piers here, one located near the entrance to the park and only a short walk from the parking lot, and a second pier located out at the end of the point in somewhat deeper water. Both piers are fairly new. The pier near the entrance is 300-foot long and was built in 1986. The pier out at the point was built in 1984, is 150-foot long and replaced another pier which dated back to 1962; this is the pier damaged by a fire and closed for a time in 1999.

Both piers abut a rip-rap shoreline, are located over a mainly bay mud bottom, and have considerable growth of barnacles (and some mussels) on their pilings. One result can be excellent perch fishing in the appropriate season. The pier on the end of the point also sits in water which is supposed to be among the best locally for starry flounder. In addition, the strong currents found here, as well as the rocky point itself, serve to attract large schools of jacksmelt while the nearby tidal flats are prime territories for large skates and bat rays which are always fun to catch. Finally, this is a prime sturgeon location, especially during herring spawns. 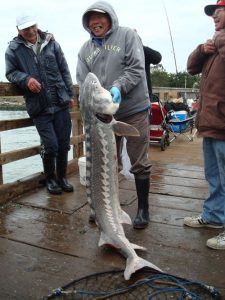 For large pileperch, blackperch, rubberlip seaperch, and white seaperch, fish during the winter and early spring using pile worms for bait; fish on or near the bottom, fish under the pier and around the pilings, and use a small size 6 or 4 hook. For walleye and silver surfperch, fish the summer through the fall months (August through October) using pile worms or small pieces of anchovy, use a small hook, again fish around the pilings but keep your bait in the mid-depth range between the bottom and top of the water. 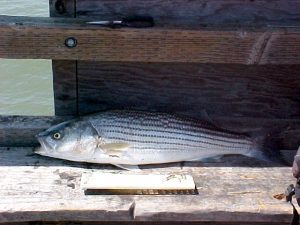 Starry flounder are occasionally caught in winter and spring (although nowhere near the numbers of years past) using pile worms, small strips of anchovy, grass shrimp or ghost shrimp; fish directly on the bottom using a sliding live bait leader. This same time may also yield sanddabs. However, the sanddabs generally hit a high/low leader best, especially one baited with strips of anchovy or pile worms. Most other species are most common during the summer and fall.

For the striped bass and halibut, use a live bait such as a small shiner; white croaker will hit on cut anchovies or pile worms; skates, bat rays and sharks will hit on many baits but squid seems to work best for the rays and skates while an oily (and bloody) bait such as sardines, mackerel, or anchovies work well for the sharks. Some of the regulars also swear that a large jack smelt cut in half makes great shark bait.

Both piers will yield jacksmelt; use a leader with three size 8 hooks baited with small pieces of pile worms or small pieces of shrimp and fish it three feet under a float. 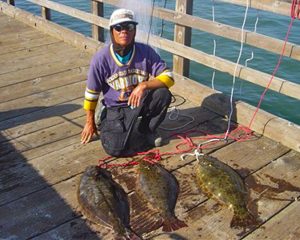 When sturgeon invade the local waters in search of herring and their eggs, this can be a crowded pier. The waters offshore from the pier may be crowded with a couple of hundred boats while space on the pier is also at a premium. The sturgeon seem to hold at Hunter’s Point until the incoming tides and then move herd-like down the shoreline with the current. They will then head back up on the outgoing tide. However, on both tides the big fish seem to move in, close to Candlestick Point, for a period of time to the delight of the local pier rats. If you want to join the action be sure to arrive early and bring the right tackle and bait — medium to heavy rod and reel, ghost shrimp, mud shrimp, or herring and their eggs.

An unusual catch was reported one day during the El Nino year of 1998. Record amounts of rain had fallen during the first two weeks of February, run-off had filled every available stream and ditch that drained into the bay, and the waters surrounding the pier closely resembled a glass of Hershey’s chocolate milk. Even so, anglers had managed to land jacksmelt, sturgeon, and even a seven-gill shark in the days leading up to this special day. The day in question however had proved fruitless except for one lone fish — a freshwater catfish that had evidently been flushed down into the bay by the torrential flows of the local creeks. It wasn’t reported which of the various catfish species had managed to make this transition to bay denizen, but the story exhibits the tremendous amount of water which can enter the bay during some winters, transforming the saltwater bay into a virtual freshwater lake — although 1998 was an exceptional year. 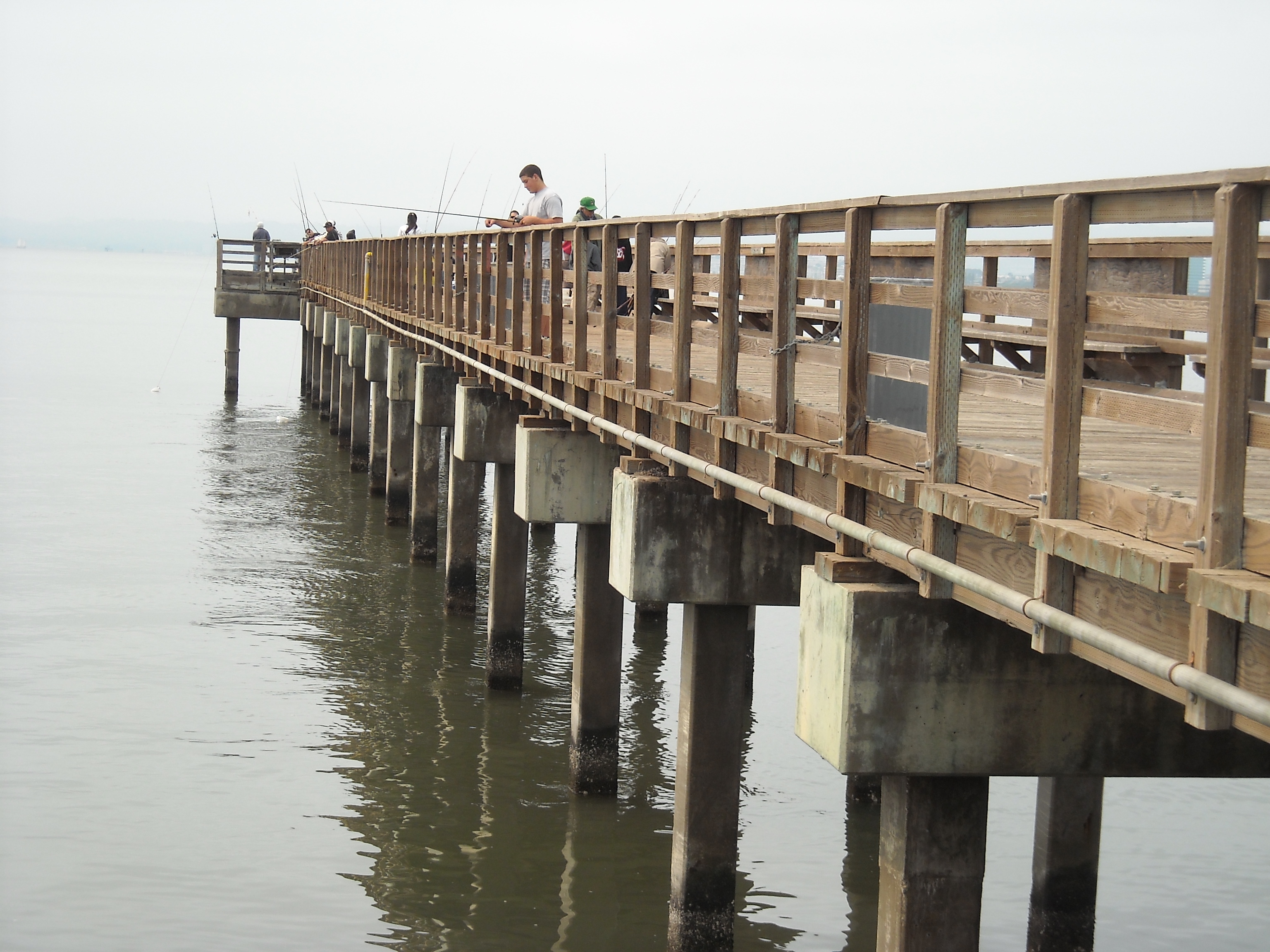 May 1, 2000; To: Pier Fishing in California Message Board; From: Steve; Subject: Candlestick Park Pier

Fished Candlestick #2 tonight again (had so much fun Friday). I started out at about 6 PM, fished till 11:30 PM or so with my friends Mark and Christine. Met up with Jun (pier rat) and his wife at the pier. The wind was howling again, no fish at all. Jun packed up and left right as the wind died down a bit. Jun, you missed out tonight! I was trying out my new 15′ Ugly Stik/Diawa J6000/Spiderline Fusion (80lb). Didn’t matter. Something grabbed a chunk of squid and ran right for the pier. I brought it in as quickly as possible, but it was coming in so fast I could feel the line slapping against the rod as I reeled it in. The fish went to the left of the pier (as I caught up with it) and it took a rest for a few seconds. I was laying into it and trying to bring it up but the fish just sat there. It ran again, right towards the shore, took another rest (about 40 feet from the bank), and dashed right under the pier. I was able to keep it away from the pilings for a bit but I wasn’t gaining any ground either. There was no moving the fish. It was straight down. I have caught many fish in my time but I can assure you I have never felt anything like this. It really felt like I was just hooked on the bottom. The fish just sat there and would strip a few feet off whenever it pleased. It became very obvious to me that I was not in control of the situation. Christine was hanging off the back of the rod. Finally it made a run under the pier, wrapped around, and snapped right off (broke the main line). Monster bat ray? Shark? Blair Fish Project? We never got to see it at all. Mark and Christine had never seen anything like this in their lives and they were totally freaked out. They have not been out on the piers, I told them there were some big fish out there, but I guess it’s hard to believe until you see it. Later that night we hooked into two monster rays and a small leopard shark. The fish all went back (via the net) to be caught another day. Good luck everyone!

Went plugging for either halibut or stripers but was not successful. It was a very windy day and the water was kinda murky from all the wind and waves. After a few hours of plugging, I just hang out by the pier to observe what was going on. Some guys gave me some live bait which I willingly accepted since I really was not going to bait fish today. It was also slow on the pier, but a few guys fishing shiner perch and drifting their rigs far away with balloons, about more than 100 yards. They caught three big leopard sharks. These sharks were huge, the minimum probably went around 48” and all looked to be females. All were caught as the tide started going out to mid term. 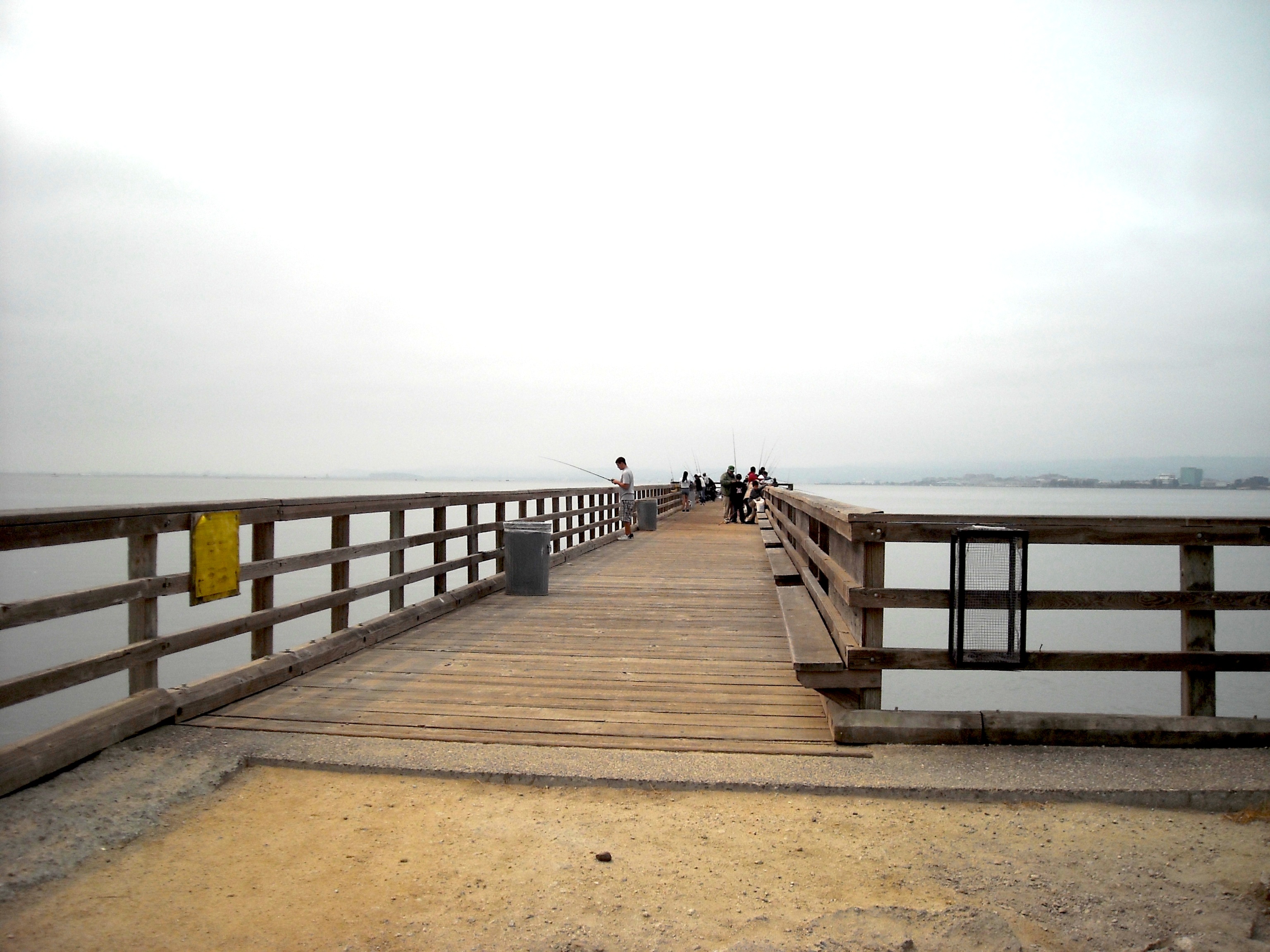 Special Recommendation.  Bring a warm coat with you during winter, spring and summer; fall can be balmy and relatively wind free.

History Note. Two explanations are given for the name Candlestick Point. One version says that in 1894 a survey station was established here and named after Candlestick Rock, an eight-foot-high pinnacle that was located near today’s stadium. A second story says that before filling operations began in 1910, the local shoreline had a land form in the shape of a candelabra. That shoreline was of course filled over and extended in the name of progress.

Hours: The park is open from 7 A.M. to 8 P.M.
Facilities: There are lights and fish cleaning stations on the piers. There are restrooms at the foot of the far pier, restrooms near the parking lot for the near pier. There are picnic tables and windbreaks near the foot of the far pier. There is considerable parking at the entrance of the park. There is a $ 7 fee to enter the park.
Handicapped Facilities: Handicapped parking and restrooms. The pier is quite a distance from the parking lot. Not posted for handicapped.
How To Get There: From Highway 101 take the Candlestick Park exit and follow the road to the park.
Management: California Department of Parks and Recreation.