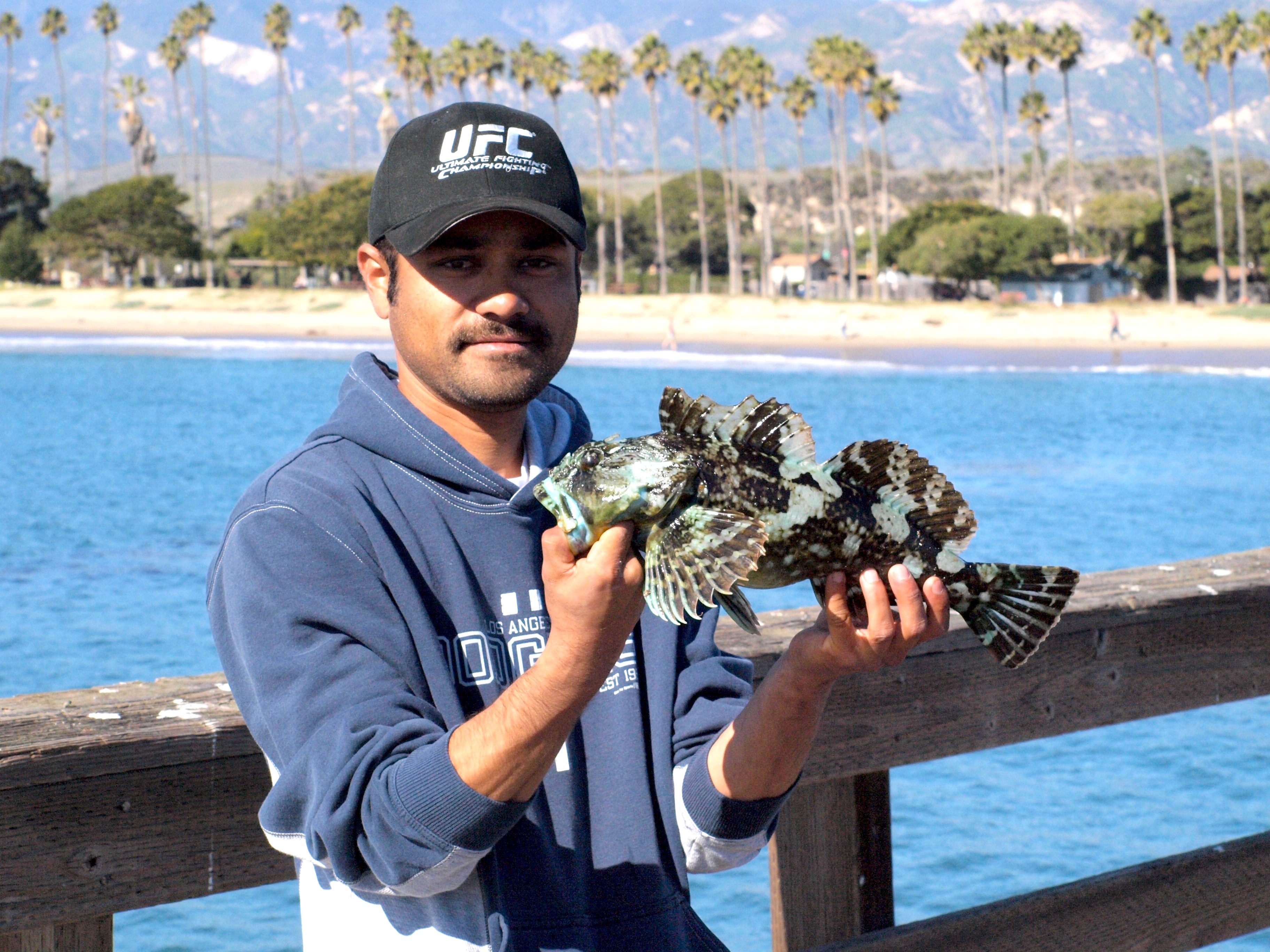 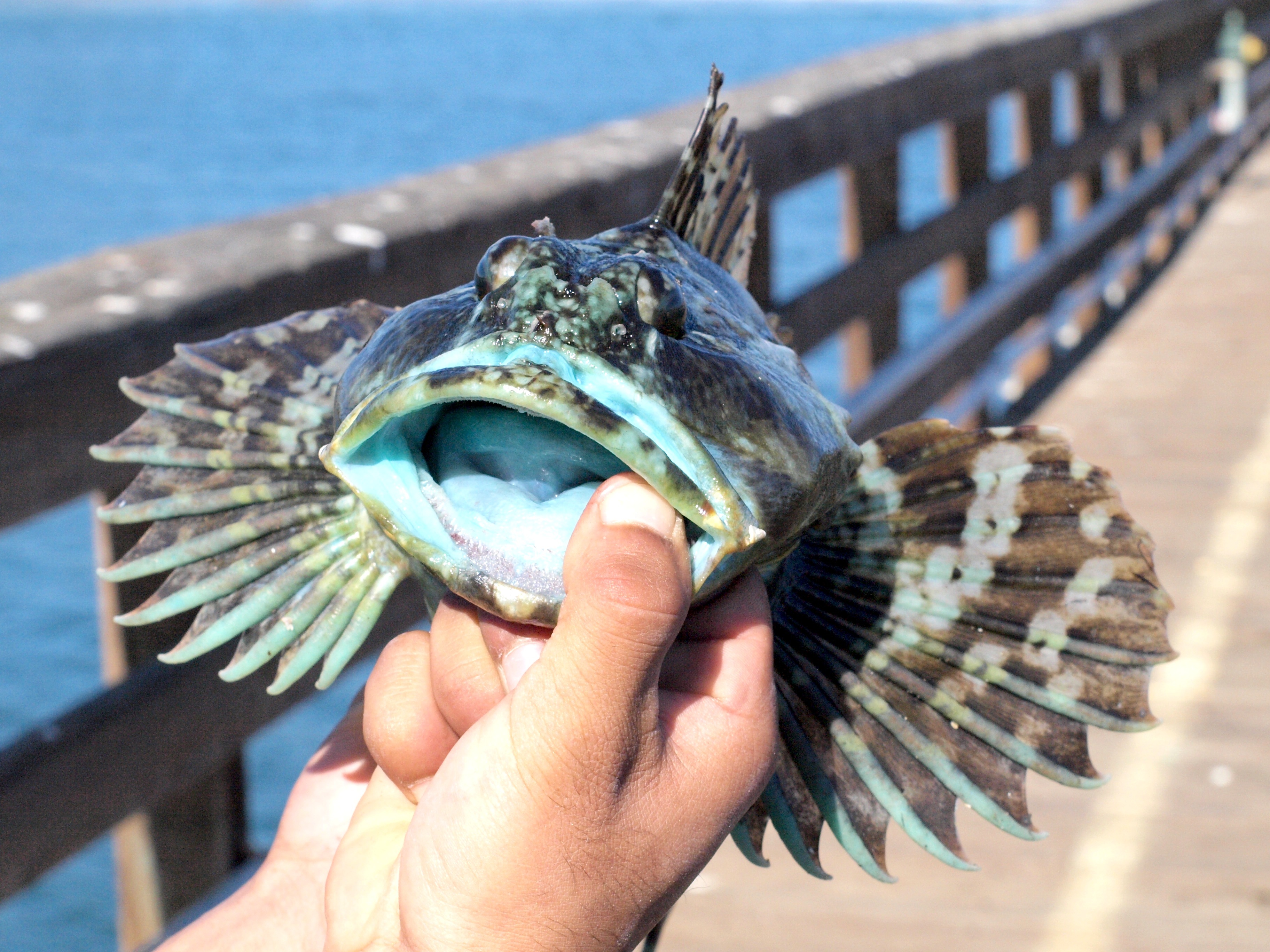 Cabezon from the Goeta Pier 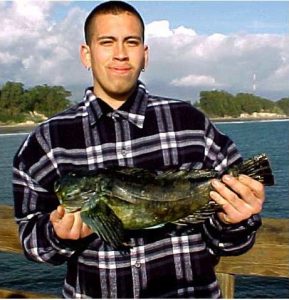 Cabezon from the Goleta Pier

Identification: They have a very large head with a broad bony support from the eye across the cheek, no scales, a cirrus (fleshy flap) on the midline of the snout, and a pair of longer cirrus just behind the eyes. The coloring is brown, bronze, reddish, or greenish above, whitish or turquoise green below, with dark and light mottling on the side. The lining of the mouth is a translucent turquoise green. The color may correlate to their sex with 90% or greater red-colored cabezon being males, 90% or greater green-colored cabezon being females. The mouth is broad with many small teeth. Juveniles sometimes bright red. 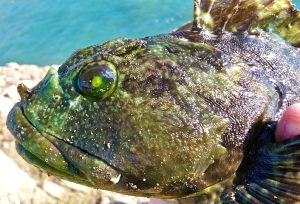 Size: To 39 inches and 25 pounds; most caught from piers are less than two feet in length. The cabezon is the largest member of the cottid (sculpin) family. The California angling record was a fish weighing 23 lb 4 oz; it was taken near Los Angeles in 1958. The diving record is for an 18 Lbs 6 oz fish taken off Pedotti Ranch in Sonoma County in 1984.

Habitat: Typically found in shallow-water rocky areas, from intertidal pools to jetties, kelp beds and rocky reefs, any area with dense algal growth. Older fish tend to move to deeper water, as deep as 250 feet; recorded to a depth of 798 feet. Typically inhabits the tops of rocky ledges as contrasted with rockfish and lingcod that prefer the sheer faces of ledges. Cabezon like to sit and it doesn’t seem to matter if it’s in a hole, on the reef, or on vegetation, they sit versus actively swimming—until they see food. 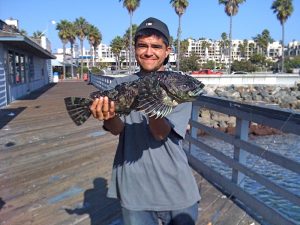 Cabezon from the Redondo Sportfishing Pier

Shoreline: A favorite catch for rocky shore anglers throughout California. 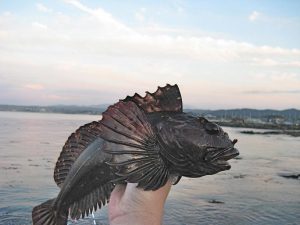 Cabezon from the Coast Guard Pier in Monterey

Boats: A prize species for boaters in central and northern California.

Bait and Tackle: Although most of the cabezon caught from piers will be fairly small fish less than two feet in length, most years also see some larger fish in the 8-12 pound category. Because of this, you should use at least medium sized tackle; line testing at least 15 pound breaking strength and hooks around 2/0 in size. The best baits are small crabs and fresh mussels but cabezon will bite almost anything that looks like food. Their normal diet includes crabs, small lobsters, abalone, squid, octopus, small fish and fish eggs. Although they often reach good size, they can be frustrating to catch. Cabezon will often tap or mouth bait and spit it out; patience and a feel for when to set the hook is required. Also remember that they like to congregate around “cabezon” holes; if you catch one, there will often be more around. 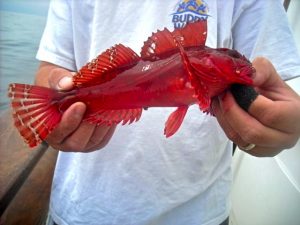 Food Value: Excellent! Cabezon offer up firm textured, mild-flavored fillets that have a somewhat delicate, sweet taste similar to crab meat. Given that crabs are one of their main foods, that shouldn’t be too surprising. Cabezon can be prepared in almost any manner—fried, baked, grilled, or steamed. Although few fish are better eating, anglers should not eat the roe (eggs) of cabezon—the eggs are poisonous and can make a person violently ill. Don’t worry if the flesh is blue colored, this is a common occurrence and the flesh will turn white when cooked. 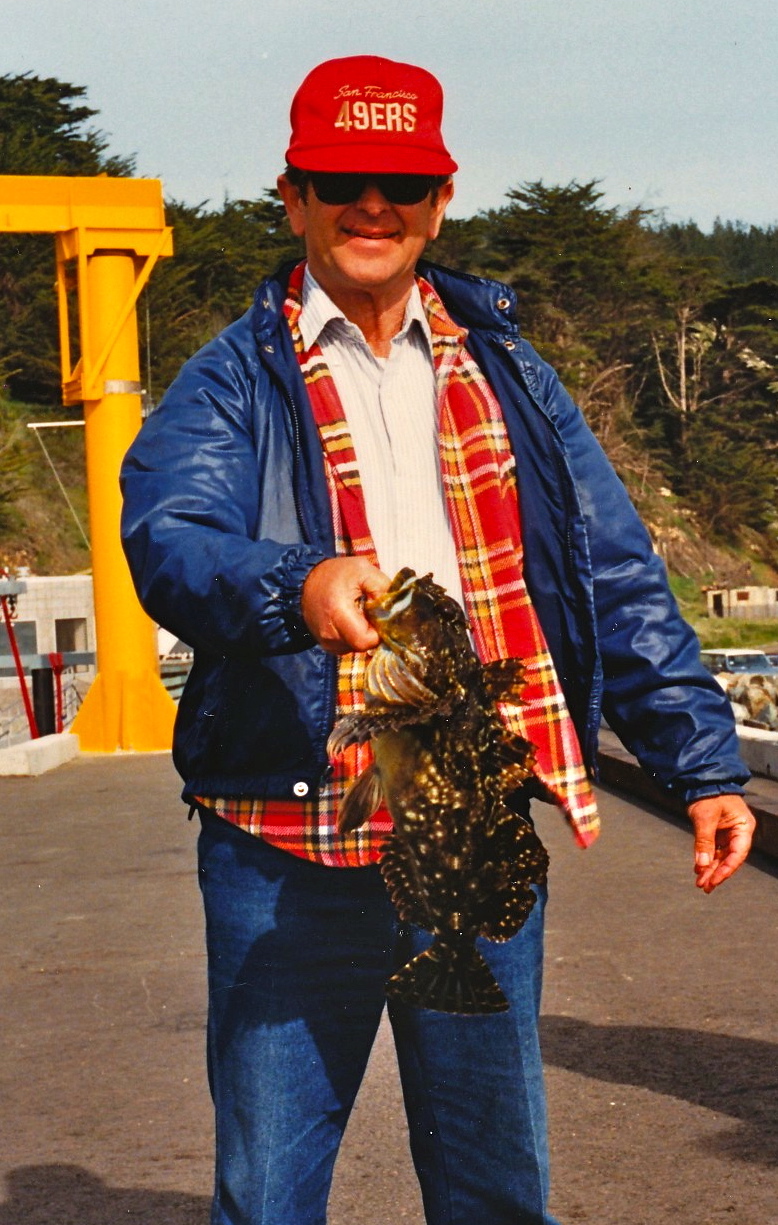 Cabezon from the Point Arena Pier

Comments: A “lie-in-wait” predator. Their coloring lets them blend in with the surroundings where they lie motionless. When food passes by they use their large, powerful pectoral fins and tails to lunge after the prey engulfing it in their large mouths. In Spanish the word cabezon means big headed or stubborn and it well describes both their looks and temperament. Cabezon can live to about 20 years of age and I imagine an old cabbie might be a real grouch.

An interesting name— “J. L. Schoebech landed a caponzini weighing fifteen pounds, which the crowd of fishermen nicknamed St. Patrick’s fish, from its green coloring and deep greenish bulging eyes, which are enormous in size, with a big circle of yellow encasing the entire eyeball. The head and mouth are immense. When held up to the sun the green and yellow with the white mouth present a striking combination of colors.”—Santa Cruz Evening News, March 17, 1919 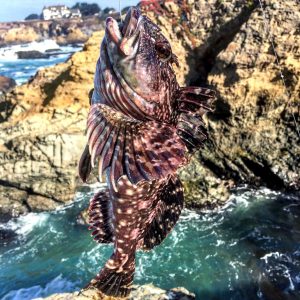 Some color variations of Juvenile Cabezon 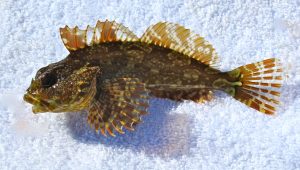 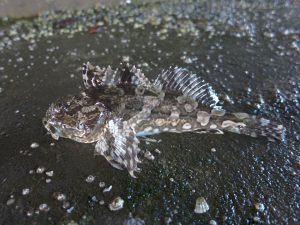 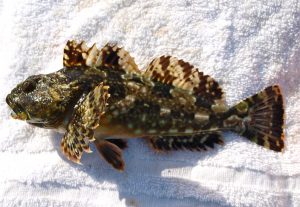 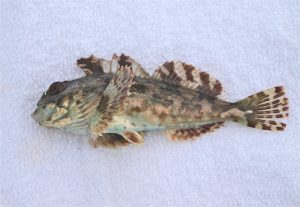