Species: Embiotoca lateralis (Agassiz, 1854); from the Greek root words embios (living) and tocos (to bring forth) and the Latin word lateralis (lateral, due to their blue stripes).

Identification: Striped seaperch have narrow orange and blue longitudinal stripes with blue spots on their head. Their dorsal spines are low and their body is deep and compressed. Dark and light color variations. 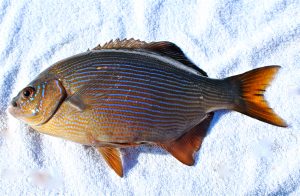 Habitat: Typically found in shallow-water, rocky-shore area, most often near the the bottom. Recorded to a depth of 312 feet.

Shoreline: One of the main catches for rocky shore anglers in central and northern California. 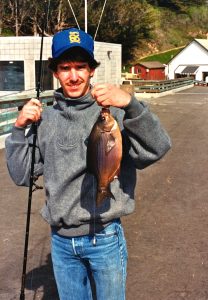 Bait and Tackle: A high/low rigging is most commonly used for these large perch. Use a size 6 or 4 hook, a weight heavy enough to keep your bait stationary, and fish on the bottom near the pier. Striped perch most commonly travel in schools; if one is caught more are probably around. These perch will often make a sharp first strike without hooking themselves. Be patient, they will return and often keep pecking at the bait until hooked. The best bait depends on location. North of San Francisco the best bait is fresh mussels, raw shrimp (small pieces), live rock crabs, live pile worms, frozen tube worms and crab backs; in the Bay Area live grass shrimp and fresh mussels are the top baits.

Food Value: Large enough to eat with flesh that is mild in flavor with small flakes and soft texture. They taste best during the non-spawning season, are low in fat content, and can be cooked using most methods.

Comments: Although these perch are often large, some anglers do not like to fish for them. In the spring, the largest perch will often be females loaded with live young; when landed, the fish will start to give birth and the angler will be faced with the question of what to do with dozens of small live baby perch. A few anglers save them as bait, many throw them in the water, and some simply refuse to keep the mother perch preferring to let nature work its answer to the question of survival. 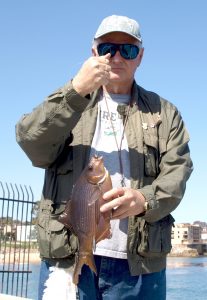