Identification: Typical perch-shape with a deep and heavy body. Their coloring is brown or brassy with thick, usually white or pink lips.

Size: Rubberlip seaperch are the largest species of the surfperch/seaperch family; they reach 18.5 inches in length. Most caught from piers are less than 13 inches long. The California record fish weighed 5 lb 0 oz and was taken at Monterey Bay, Monterey Co. in June 2009. The previous record, a 4 lb 4 oz fish, was taken in 1995 at the Monterey Dunes. The diving record fish weighed 4 Lbs 10 oz and was taken at Carmel in 2012. 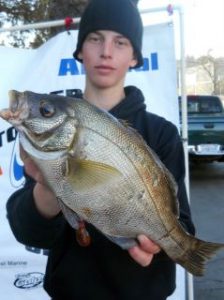 Habitat: Surf zone, shallow-water rocky areas, kelp beds and bays. Scientists report that rubberlips primarily feed at night on thin-shelled invertebrates. Are the perch able to spot the tasty morsels with their super-keen eyesight? No, rubberlips appear to use their sensitive lips (remember, some fish have taste buds on their lips) to detect their nightly dinner.

Shoreline: A favorite catch by rocky shore anglers in southern and central California.

Bait and Tackle: Rubberlip seaperch are usually taken on a high/low leader and size 6 or 4 hooks baited with fresh mussels, live sea worms, or small pieces of shrimp. Those with the proper know how use plastic grubs (usually root beer or oil colored) and they are the ones who often bag the largest fish. Small 1/12 or 1/8 oz. chrome, chrome with blue, or chrome with green Krocodiles have also proven to be very effective. 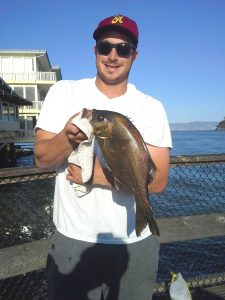 Ribberlip from the Elephant Rock Pier in Tiburon

Food Value: Since they are one of the largest perch, specimens often contain quite a bit of meat. Although their flesh has a mild taste, most gourmets rate it only fair with small flakes and soft texture. They taste best during the non-spawning season, are low in fat content, and can be cooked using most methods.

Comments: One of my favorite quotes comes from Probably More Than You Want To Know About The Fishes Of The Pacific Coast by Milton Love (director of the UCSB Love Lab). In regard to rubberlip perch he says: “What is really cool about these fish is their ability to separate small invertebrates from all the mung they suck in, without having a tongue to help. (Surprise! Fish don’t have tongues. The structure that looks like a one is actually a support for their gill arches.) Ths trick is equivalent to your putting a bunch of miniature marshmallows, broken glass, fingernail clippings and cubic zirconiums in your mouth, then separating and swallowing only the marshmallows, all without using your tongue or fingernails. Good trick, yes?” This helps explain why the big perch are so difficult to hook. Oh, and if you haven’t yet bought Mr. Love’s book, do it now. 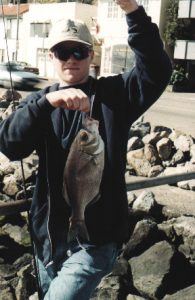 Rubberlip from the Sausalito Pier