Species: Morone saxatilis (Walbaum, 1792); from Morone (a word of unknown origin attributed to Samuel Latham Mitchell who named it in 1814) and the Latin saxatilis (to live among rocks). CA Fish Bulletin #28 (1930) uses the name Roccus lineatus. CA Fish Bulletin #157 (1972) uses Roccus saxatilis. Although a bass, stripers are placed in the “temperate bass” family Moronidae instead of the “sea bass” family Serranidae, which is home to most of California’s saltwater bass. 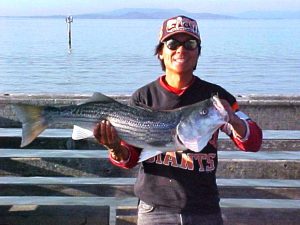 Identification: Typical bass shape with two dorsal fins. Brownish, copper, or steel bluish with brassy reflections; more silverish on the sides; seven or eight blackish, horizontal stripes on the side of the body. 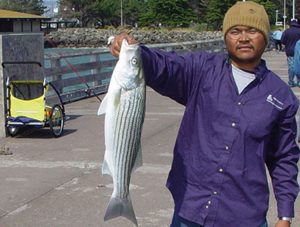 Striped Bass from the Berkeley Pier in 2003

Size: Up to 4 feet and 90 pounds in California. Most striped bass caught off piers are the smaller schooling stripers under five pounds in size. Each year will see a few lucky anglers catching large fish—some up to 40-50 pounds.

Range: From 25 miles south of the California-Mexico border to Barkley Sound in British Columbia. Common in San Francisco Bay and central California to Monterey; occasionally seen at southern California piers.

Habitat: An anadromous species that moves from freshwater to saltwater and back. Typically found in shallow-water areas, both sandy and rocky. Recorded to a depth of 180 feet. 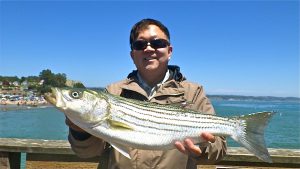 Striped Bass from the Capitola Wharf in 2016

Piers: Really only common at Bay Area and Delta piers and even here fewer and fewer are caught each year. Striped bass are anadromous, spending part of their life in fresh water and part in salt water. Most California stripers spend the winter months in the fresh water of the Sacramento-San Joaquin Delta; they then move down to salt water in the spring, spend the warm months in the bay or adjacent ocean areas, and return upstream again in the fall. Spring and fall see catches of stripers at piers on both the west and east sides of San Pablo Bay as the fish head toward the Golden Gate. Summer is the prime time for piers throughout San Francisco Bay as well as areas out to Pacifica Pier. Best bets depend on the season. During the mid-to-late summer, I would try Pacifica Pier or any pier along the western side of San Francisco Bay. During the spring, I would try East Bay piers including Berkeley Pier and the Point Pinole Pier. During the fall, hit mainly Marin County piers (the World Series bite in October is famous) and piers near the Carquinez Strait area including the Eckley Pier and Martinez Pier. Fall is a prime time to try the various piers in the Pittsburg and Antioch area for the larger stripers that are passing through. Almost all of the piers in the Antioch area (but especially the Antioch Bridge Pier) out to the Rio Vista and Isleton piers seem to yield an unending number of small (mostly illegal) stripers from spring to fall. 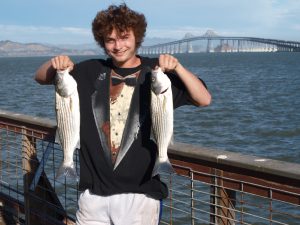 Shoreline: One of the main goals for shore anglers in the San Francisco Bay-Delta. For many years the beaches south of San Francusco were considered the top striper areas in the West.

Boats: One of the main species sought out in the San Francisco Bay-Delta. Both live bait and lures attract striped bass. 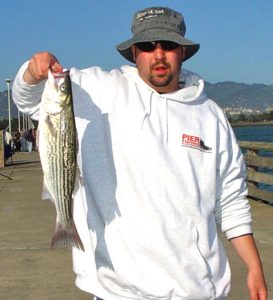 Striper caught at the Berkeley Pier in 2003

Bait and Tackle: The main idea here is to have heavy enough tackle that you can fight the unexpected big fish. Although most of the fish you catch will be less than 10 pounds, be prepared for the 30-pounder. Tackle should be medium size, line should be at least 25-pound test, and hooks may vary from size 2 to 2/0. Best baits are live small fish such as shinerperch, staghorn sculpin (bullheads), other small sculpins, or live shrimp. Cut bait including sardines, anchovies and even mackerel will often work as well. Stripers will also hit worms, but worms are used mostly for the smaller fish. Several regulars have mentioned that dead “bullheads” are also very effective as long as they still retain the slime on their skin. Although artificials can be deadly in a boat and on shore, they are used less frequently on the piers and tend to be less effective. To avoid the small stripers at the Antioch piers you need to use larger baits and regulars tell me that live bluegills and Sacramento squawfish fit the bill. 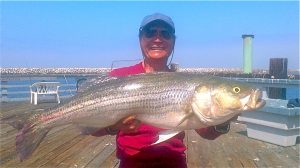 Striper caught at the Redondo Sportfishing Pier in 2012

Food Value: Striper fillets have a mild flavor with small flakes and somewhat soft texture. The meat is white in color and moderate in fat content. It is delicious almost any way you prepare it. However, the flesh of larger fish (above about 12 pounds in size) tends to become coarse (softer or looser in texture) and becomes less flavorsome with age. In addition, if taken from piers in the Bay Area, the flesh will tend to have toxins so cooking methods that help remove toxins from the flesh, i.e., broiling, are recommended. 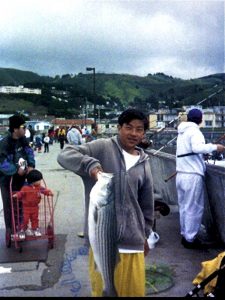 Striper caught at the Pacifica Pier by Matt Shockley in 1998

Comments: Striped Bass were introduced from the Atlantic Ocean in 1879; the first fish were released in the Carquinez Straits near Martinez. For many years striped bass were the most sought after fish in San Francisco Bay; today they share that honor with white sturgeon and California halibut. Although very rarely taken from southern California piers; they have been planted in San Diego, Mission, Newport and Anaheim bays since 1974. For some, still unexplained reason, there was an unusual invasion of southern California beaches by stripers in the warm-water year of ’98. Linesides were caught all the way south to San Diego. 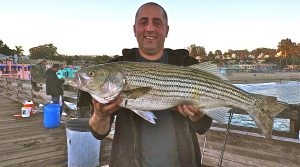 Striped from the Capitola Wharf in 2016