Species: Paralabrax nebulifer (Girard, 1854); from the Greek words para (near) and labrax (a European bass), and the Latin words nebul (smoke or dark) and fer (to bear), in reference to the color on their sides.

Identification: Easily differentiated from kelp bass by the coloring and the shape of the dorsal fin. The dorsal fin is long and continuous, with a notch between the spiny and soft ray portions but not as deep as on kelp bass; the third spine of the dorsal fin is much longer than the fourth and twice as long as the second. The color is generally dark gray to greenish on the back, with faint bars on the sides, and a whitish-colored belly. There are usually small golden-brown spots on the cheeks. A 10-inch albino sand bass was landed in July of 1965 from the Sportfishing boat Palomar while fishing 8 miles northwest of Oceanside, and one mile offshore from the San Onofre power plant. A similar-colored, 12-inch albino sand bass was reportedly caught just two weeks earlier by the sportfishing boat Sea Lure. It was caught approximately a quarter mile away. The first fish is now a resident of the Los Angeles County Museum of Natural History; the second fish was not saved. 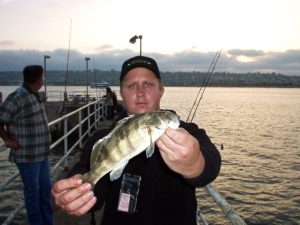 Size: Length to 25.6 inches and weight to 14 pounds. Most caught off piers are less than 12 inches long (although a 12-pound fish was reported from the Shelter Island Pier in February of 1997). The California record weighed 13 lb 3 oz and was taken at the Huntington Flats in 1988. The diving record fish was 12 Lbs 12 oz for a fish taken in Long Beach in 2004.

Habitat: Usually found around sandy areas near kelp or around rocks near the bottom. Concentrated in waters 15-85 feet deep but recorded to a depth of 600 feet. 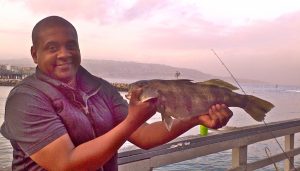 A nice-sized sand bass from the Redondo Sportfishing Pier

Shoreline: A common catch for shore anglers in southern California.

Boats: One of the main species for boaters in southern California, especially during spring spawning times.

Bait and Tackle: Another opportunistic feeder grabbing just about anything that moves. The smaller fish that hang around piers (under 12 inches) focus in on mysids (tiny shrimp-imitating critters), crabs, worms, clams, and small fishes. All in all it’s probably a healthier diet than that experienced by young pier anglers—corn dogs, French fries, and soda pop. Adult sandies, much like adult humans (sure), eat a more refined diet focusing in on fish, octopi and crabs. Like kelpies and spotties, the sand bass is usually caught on the bottom with light tackle. Best bait is live anchovies or smelt followed by strip bait, ghost shrimp, bloodworms, or fresh mussels. They’ll often hit artificial lures like swimbaits.

Food Value: If you are lucky enough to land a keeper-size fish you will have a good meal. Barred sand bass have a mild-flavored meat suitable to almost any kind of cooking. They can be used as fillets, baked whole, or cut into smaller pieces for deep-frying.

Comments: Sand bass are a seasonal catch (primarily May through October) and when available may be caught in good numbers. Adults spawn during the summer; young appear inshore during fall and winter. 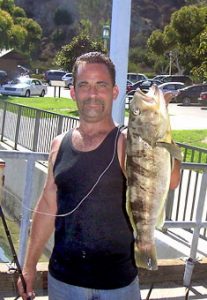