Species: Balistes polylepis (Steindachner, 1876); Balistes comes from the Latin word ballista (a device that shoots arrows—referring to the trigger-like spine) and the Greek word polylepis (many scales)

Identification: The body is very compressed with a large head that terminates in a small mouth containing very strong, protruding, incisor-like teeth (8 in each jaw) that are capable of crushing shells. 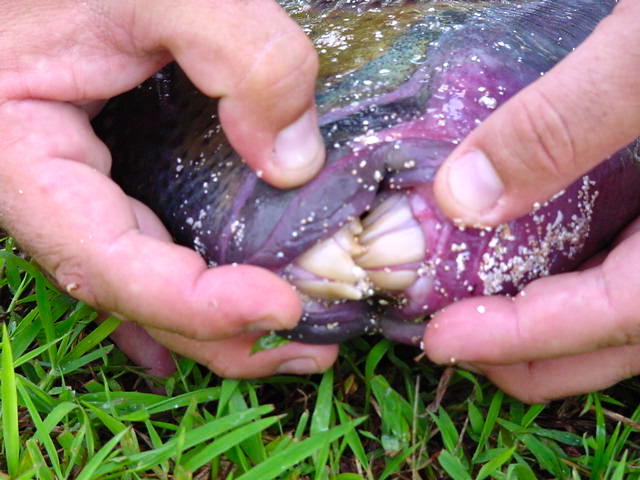 They have two dorsal fins the first containing three strong, sharp spines. For protection, they can erect the first two spines, which locks the first, longer spine in place. The spine can only be released by depressing the second, “trigger” spine. The second dorsal fin is more common and contains 26-28 rays. Small gill slits are located in front of the pectoral fin. The thick, leathery skin has small adamantine-like scales. The coloring is brownish to bluish-gray with blue speckling on the head that can “light up” when they are feeding or fighting. 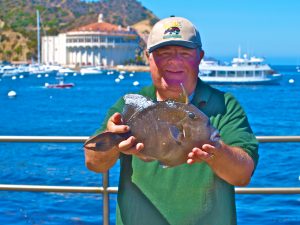 My first triggerfish from the Cabrillo Mole, 2010

Size: To 31.5 inches and around 16 pounds. The IGFA world record fish weighed 16 pounds 4 ounces and was taken in Hawaii.

Range: San Antonio, Chile, to Mexico and the Gulf of California, north along the Pacific Coast to Metlakatla, southeastern Alaska. Common from the tropics to Bahía Magdalena southern Baja California and in southern California (although once considered rare north of Baja California).

Habitat: Generally found in nearshore waters near rocky reefs and adjacent sand or rubble. They range from a depth of about ten feet down to a recorded depth of 1,680 feet deep. There appears to be at least three established groups found near piers—in Redondo Beach, Santa Monica and Catalina. They feed primarily during the day and generally on a variety of slow-moving benthic-invertebrates such as snails, sponges, sea urchins, shrimp, and crabs. However, they will also feed on small fish when available. 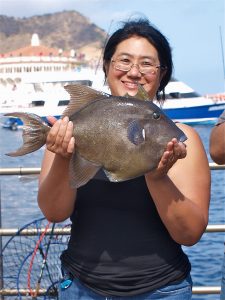 Rita and a triggerfish from the Mole, 2014

Piers: Mainly reported from the Redondo Beach Pier, Santa Monica Pier, and the Cabrillo Mole in Avalon (where quite a few have been caught).

Shoreline: Several have been caught from the shoreline at Catalina and the jetty at Redondo Beach. 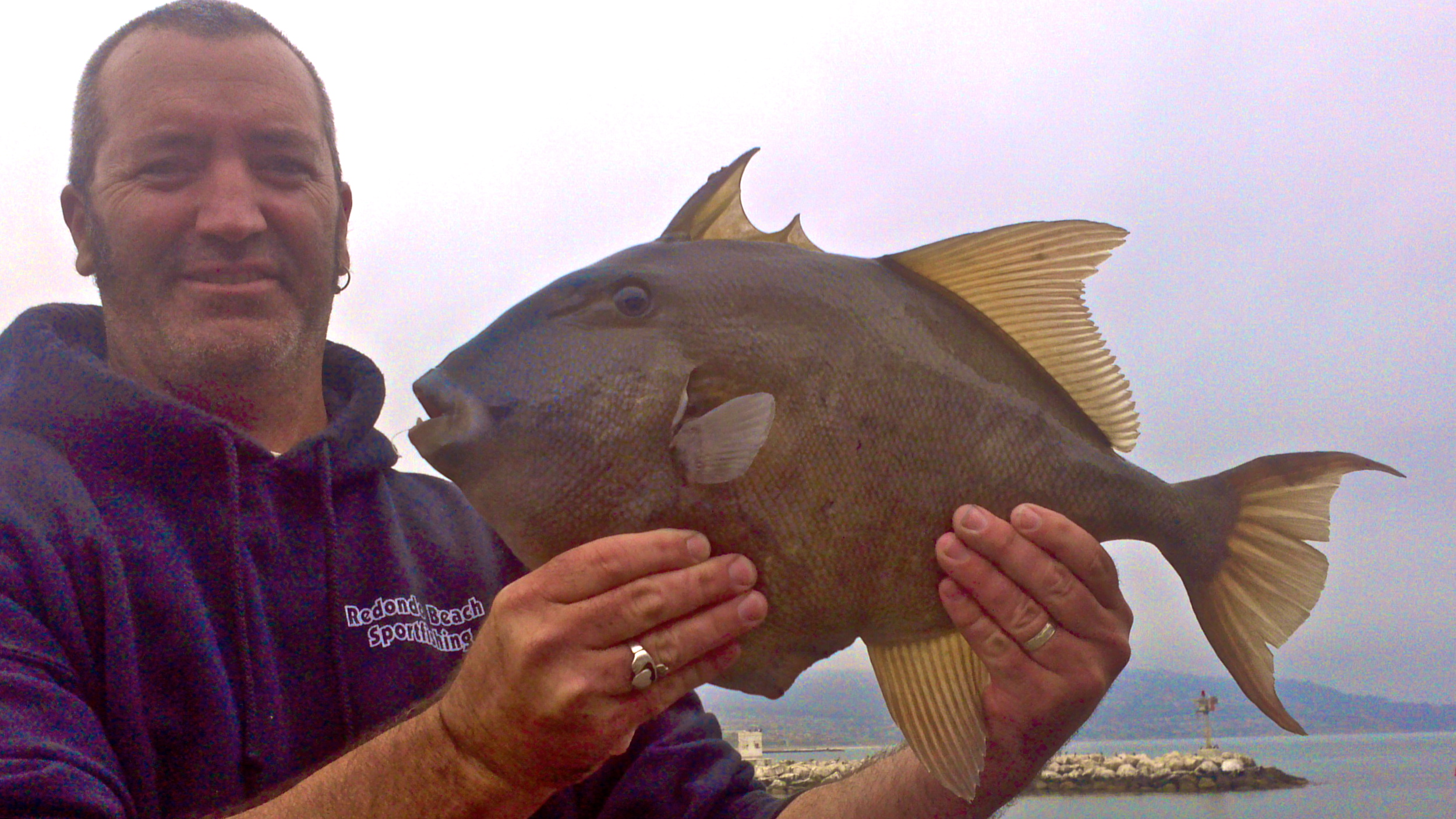 Triggerfish from the Redondo Sportfishing Pier, 2016

Bait and Tackle: Caught near or on the bottom with a variety of baits including squid, market shrimp, ghost shrimp, small crabs, and even cut bait. They are a surprisingly tough fighter, very powerful and matching pound for pound most Sportfish. Given their very strong teeth, some recommend using stronger than normal hooks.

Food Value: Excellent, all-white fillets that are mild flavored with no apparent flakes and dense textured. They are low in fat content and can be cooked many ways. The only problem is that the skin is like leather so you need a good, sharp fillet knife (and perhaps a knife sharpener) while cleaning them. 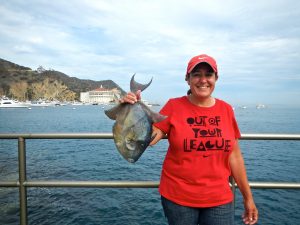 A triggerfish from the Cabrillo Mole, 2016 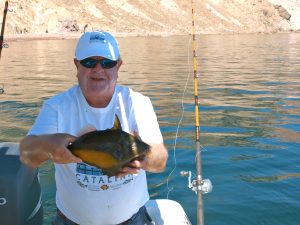 Although not quite as dangerous as a great white shark, triggerfish are considered hazardous to divers. At least five divers have sustained bites from triggerfish, mostly from tropical species. Although typically shy, females guarding nests apparently become “extremely aggressive” and divers are warned not to approach them. Divers are also warned not to try to feed triggrefsih since “even small species are capable of inflicting bite wounds.” (J.E. Randall and J.T. Millington, “Triggerfish bite—a little known marine hazard,” Journal of Wilderness Medicine 1, 1990). Who would have imagined there was a Journal of Wilderness Medicine?

If you visit Hawaii you might look for its most famous fish, a triggerfish, the humuhumunukunukuapua’a, which is pronounced “who-moo-who-moo-noo-koo-noo-koo-ah-pooah-ah. If you can’t pronounce that, just call it humuhumu for short. 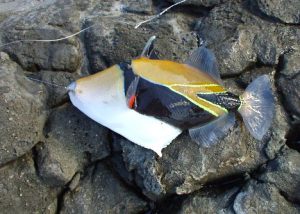 Common name: Two species are commonly known by this name: the pig-nosed triggerfish and the aculeate triggerfish.

Physical characteristics: Grows to a pound or two. Body deep and compressed. Head pointed, snout-like, ending in a small mouth with strong jaws. Eyes are small and set high on the head about one-third of the  way back along the body. Pectoral fins are small. A single prominent spine sticks up from midback directly behind the eyes. When erected, it is locked in place by a much smaller spine behind it and may not be lowered until the second spine has been depressed. The pig-nosed humuhumu is the Hawai’i State Fish. It has a dark band running from the eyes diagonally along the sides to the anal fin. The aculeate humuhumu has three or four rows of dark spines on the caudal peduncle. The skin of both fish is tough and leathery.

Habits: Feeds on shrimp, crustaceans and seaweed. Common in reef areas ranging from the shallows to depths of five or more fathoms. Generally solitary. Hides in openings in the coral when threatened.

The triggerfish is featured in the following famous song —My Little Grass Shack in Kealakekua Hawaiʻi by Bill Cogswell, Tommy Harrison & Johnny Noble

I want to go back to little grass shack

I want to be with all the kanes and wahines

That I used to know long ago

I can hear the old guitars playing

On the beach at Hōnaunau

I can hear the old Hawaiians saying

It won’t be long till my ship will be sailing

I want to go back to my fish and poi

I want to go back to my little grass shack

You can listen to Don Ho — https://www.youtube.com/watch?v=MWlvYpJ5pRo