It’s gone now, the unique concrete pier with its distinctive diamond-shaped end, a shape designed to compensate and give maximum angling space to the short, 620-foot-long pier. The shape provided access to an inner section of water surrounded by the pier’s pilings. Anglers could fish that inner section or, by moving a few feet away, cast out into water away from the pier.

But it’s gone, it’s history, and it didn’t even receive a fitting obsequy. The El Niño spawned storms during the winter of 1998, together with their 20-foot-high waves, cracked more than one-fourth of the concrete pilings on the pier. That damage, combined with on-going corrosion of the inner reinforcing rebar, and lack of county funds, spelled doom for the pier. Initially it was estimated that at least $3 million in repairs might be necessary to make the pier safe. Further evidence of damage to the pier ruled out repair and showed the need for a rebuild. However, the cost of a rebuild, more than $5 million, was simply too much given the county’s financial situation following unprecedented damage to its properties during the winters of both ’97 and ’98 (including floods and landslides). Additional concerns were the county’s need to repay $1 billion in bankruptcy debt following the county’s 1994 bankruptcy. No money equaled no new pier. Demolition of the pier started in the fall of ’98 and the final work on its demolition was completed in March of 1999. 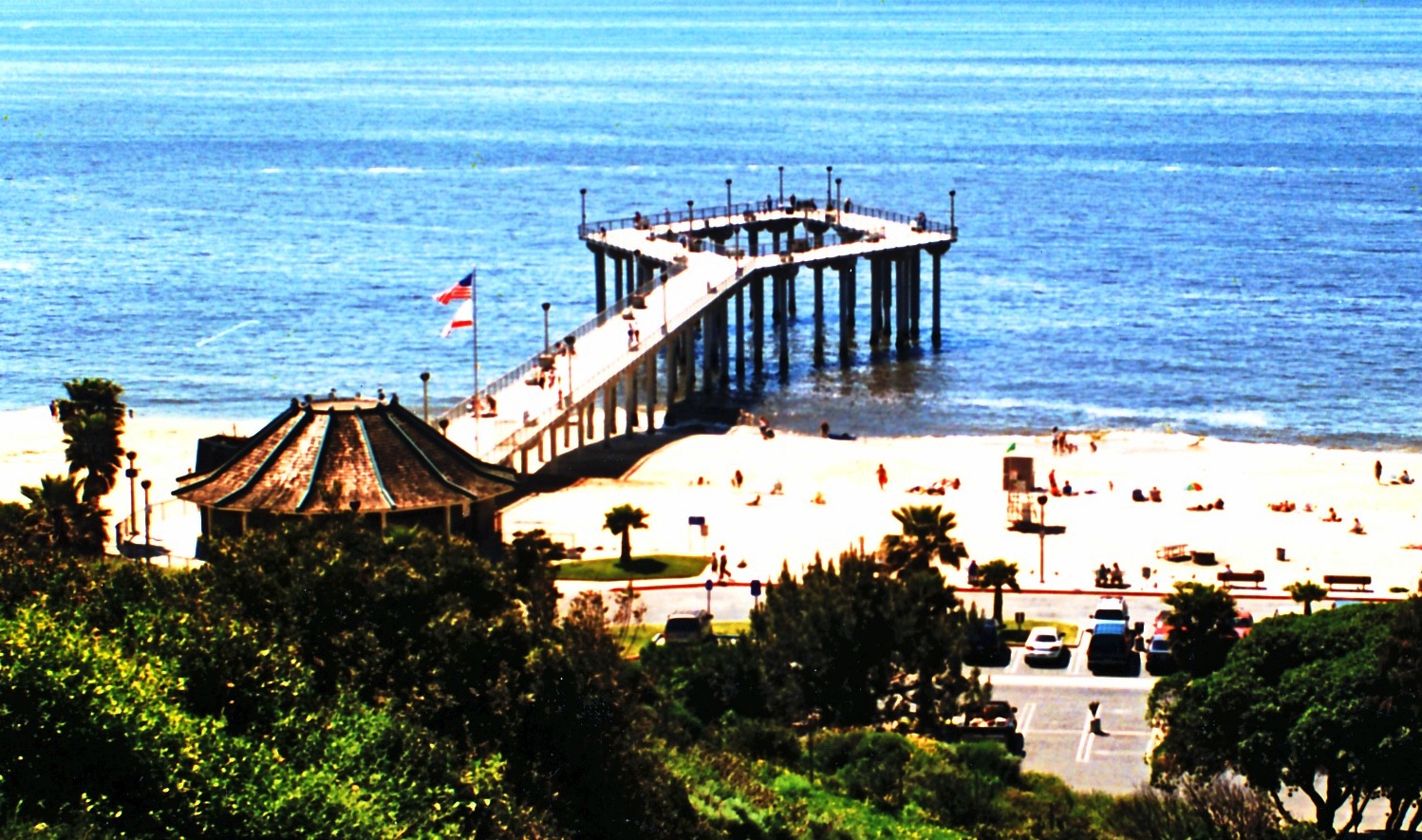 It’s truly unfortunate because the pier was both an attractive pier and a good fishing pier. It also was relatively new having been built in 1971 (and dedicated 4/24/71). It fronted on a small sandy beach; at the north end of the beach was the mouth of Aliso Creek; to both the north and south were rocky shorelines and tidepool areas. To the south was the South Laguna Beach Marine Life Refuge. Although it hardly seemed to be needed, an artificial reef was built near the pier by the WCB. It seemed to be an ideal area to catch sandy-shore and rocky-area species as well as the pelagic species found in deeper water.

Fishing in the inner section of water yielded the normal sandy-shore species including surfperch, croakers, halibut, sharks and rays (a 175-pound bat ray was caught in August of 1984). Casting out from the pier near the end, where water depth averaged 25 feet, was the best area for pelagics such as bonito, Pacific and Spanish mackerel (jack mackerel), and a few barracuda.

Fishing the inside area seemed to offer somewhat better fishing for the rocky-shore species although halibut, a sandy-shore fish, seemed to like the area just inside where the pier started to form the diamond shape. Included in the rocky-shore species were such fish as kelp and sand bass, black seaperch, rubberlip seaperch, white seaperch, sculpin (scorpionfish), sargo, black croaker, opaleye, Catalina blue perch (halfmoon), and even a few sheephead. Lobster and a few crabs were also caught in the inside area. 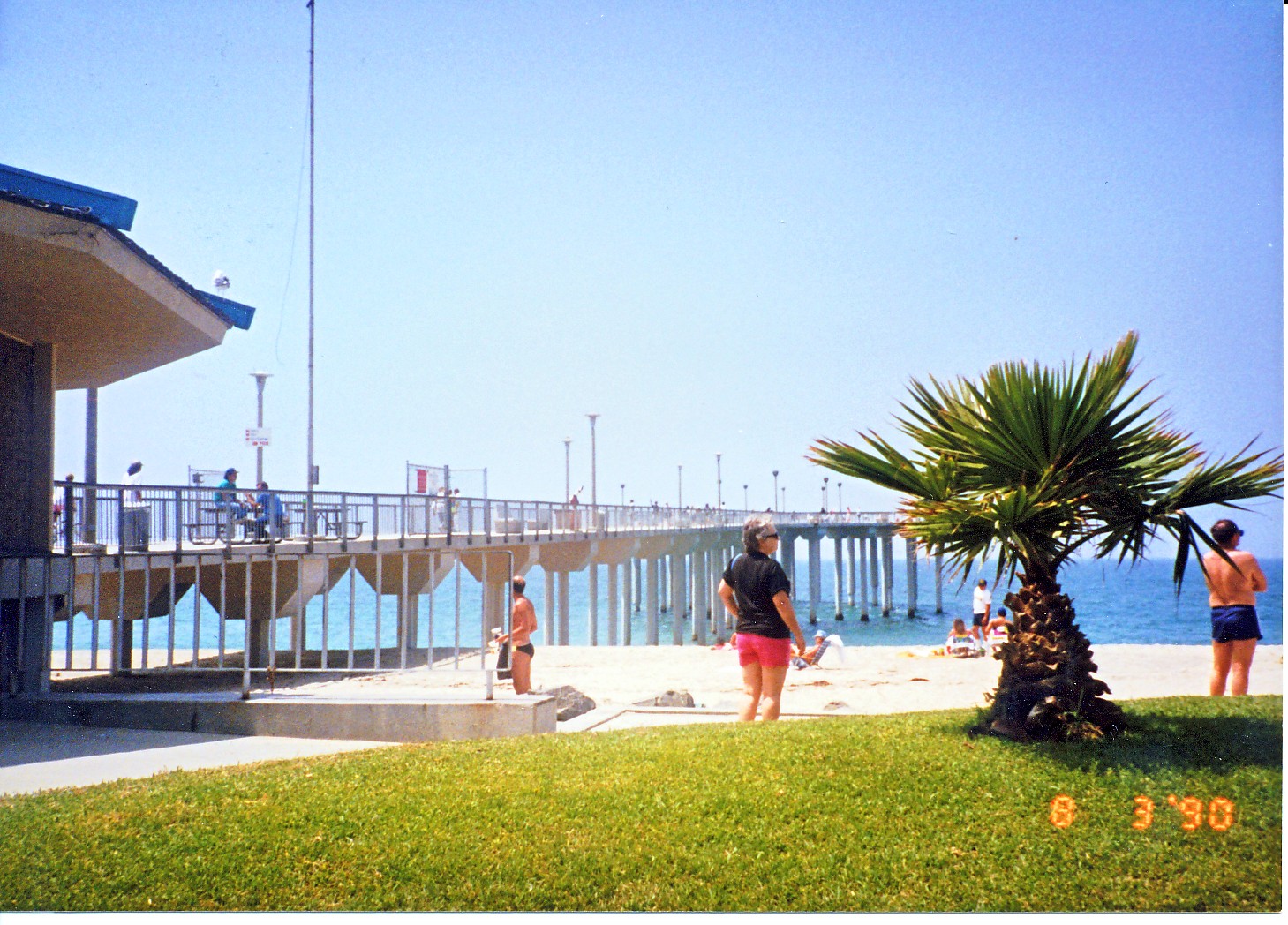 Overall though, Aliso was like almost every pier—some good days and some bad days. The following were among those that were good—as recorded in the “Fishing Roundup” in the Orange County Register. Aliso Pier at South Laguna is a good bet for early morning bonito. The fish are following an artificial reef from deep water into the pier area (October 22, 1981); Anglers fishing from Aliso Pier have enjoyed a good bite from white sea bass but most fish have been under legal size—28 inches (December 13, 1984); Frozen anchovies have provoked a halibut bite near Aliso Pier, while bloodworms and ghost shrimp have attracted the croakers (March 14, 1985); Anglers at Aliso Pier have been catching a few legal barracuda, but most have been short (June 20, 1985); Night anglers doing well on sharks at Aliso Pier (October 17, 1985); Aliso Pier has been the site of bonito and mackerel action (October 24, 1985).

A negative aspect of the pier was the number of yellow jackets that always seemed to be on the pier (at least during most of my visits). They almost instantly showed up whenever bait was placed on a bait cutting station and would stay there as long as there was any meat for them to eat. This pier and the Gaviota Pier shared the distinction of having the most bothersome yellow jackets.

One of my visits to this pier was a little disquieting. A juvenescent bacchanal of sorts was taking place out at the end of the pier. A shirty group of young men (a.k.a. yahoos) had roped off two rather lengthy sections of the pier and were heatedly (and drunkenly) letting other fishermen know that they needed all of the space for themselves. Their fastuous manner reminded me of some of those World War II films showing Nazi’s calling for more and more living space—lebensraum (well, perhaps that’s a little extreme). I was just taking pictures that day and did not stay very long but I am curious if that type of maleficent and egregious behavior was a common occurrence at the pier. 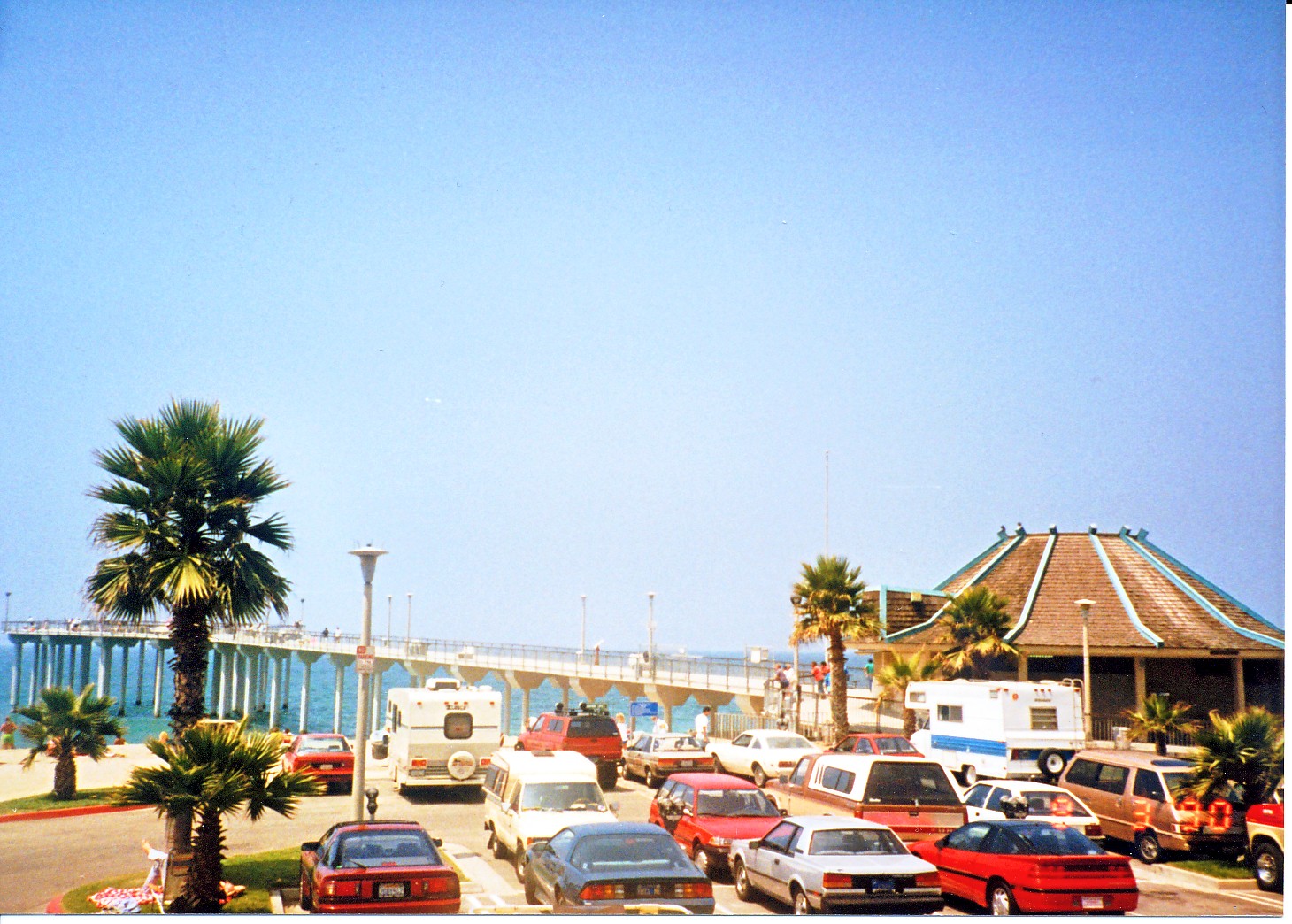 I grew up near Aliso and still remember my first ever bonito caught there when I was little. I had an old wimpy Zebco pole and was using frozen anchovies for bait on a tiny hook with a bobber. I got a great hit/miss, reeled it in and my hook was ripped in half. So I tied a larger hook on, cast to the same spot and got hit again with some great runs. My drag broke from the runs so my buddy hand lined it in and I got it! It was only about a 2 or 3-pound bonito, but I was stoked! Good memories at Aliso Pier!

Rubber dinosaur caught off Aliso pier many yrs ago…it was small clear/pink. I don’t recall if it was hooked in the mouth or not. Pretty sure I still have it somewhere. Also caught a weird animal/plant-like creature off Aliso Pier way back when. It was circular flat (looked a lot like a sand dollar but wasn’t) felt rubbery, was dark in color with some green luminescent spots I think(this was many years ago). Don’t know what it was but it had nearly swallowed my hook. Never seen one since. –abe

Was unfortunate enough to catch a Pacific Lamprey off the Aliso Beach Pier one night. Funky eel-shaped bundle of slime tied up in a knot in my line. Released to scare other fisherfolks. I still miss that pier.

Date: February 15, 2005; To: PFIC Message Board; From: dompha ben; Subject: In reply to “It was a sad day when the wrecking crane…

I truly miss “Releaso” Pier… Sight fishing halibut… The sculpin hole… plugging a TV and a Nintendo into one of the power outlets to play Super Mario Bros. while waiting for a bite, but mostly, just to say we did it… I miss that pier. 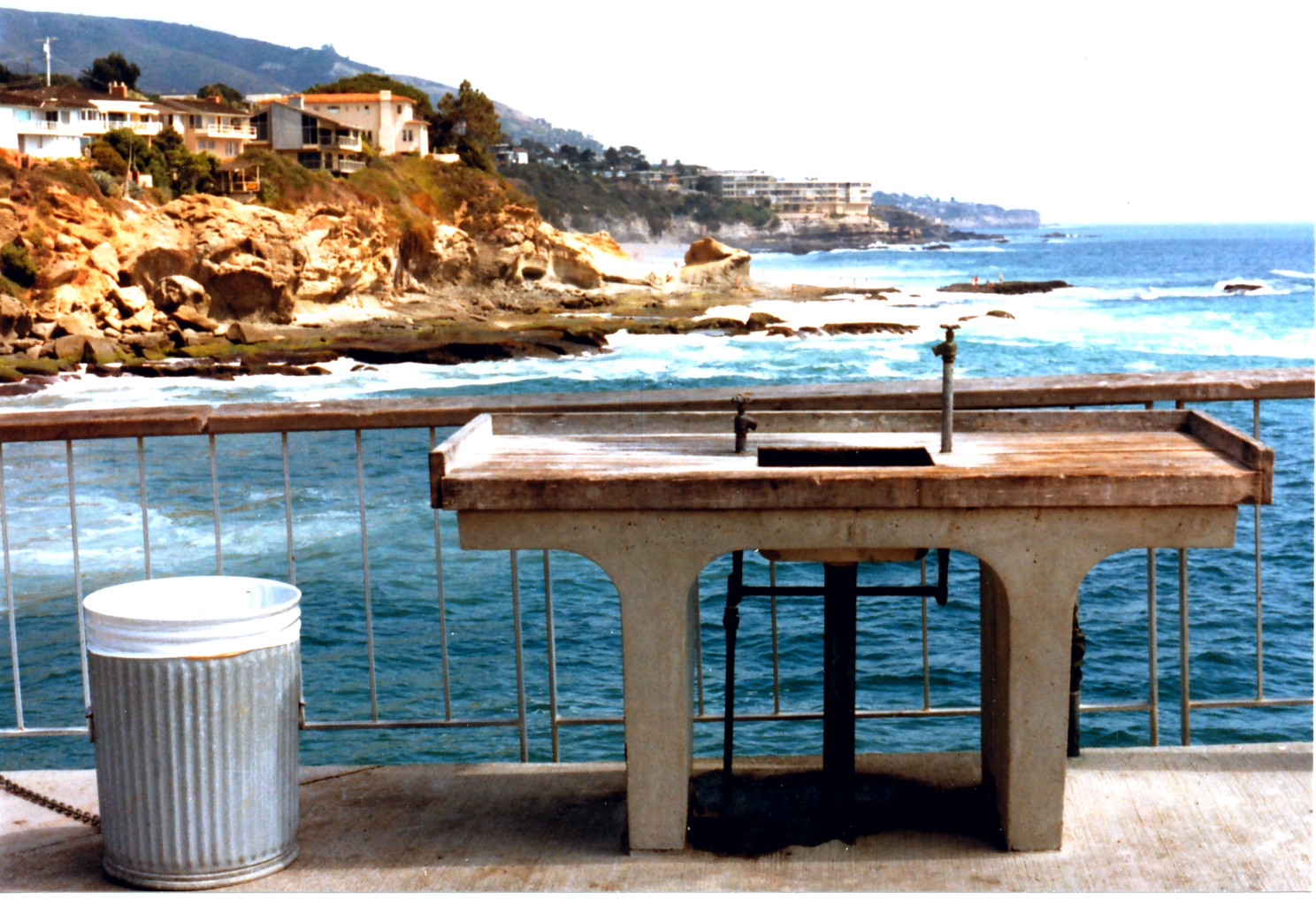 <*}}}}}}}}}>< — Nothing better portrays the feelings of a pier than the “memories” of someone who actually grew up on a pier. The following was submitted for the book “Growin’ Up A Pier Rat” but also perfectly describes why Aliso was special.

I’ve always been one to stay up late. Mom eventually stopped scolding me for being up past my bedtime, when she would discover me reading in the living room at 2:00 A.M. or sitting quietly on the porch in the middle of the night, listening intently to the subtle sounds of the neighborhood and the not-too-distant 210 freeway. Time I got to spend alone with the deafening silence, devoid of the clamor raised by my five younger brothers, was highly valued, and it helped me appreciate the noise, and the laughter, and the arguments that surround siblings.

I took a few moments to enjoy some quiet tonight (it’s still early by my standards, but what the heck) and my thoughts drifted to my favorite pier of all time: Aliso Pier. It was shorter and higher than many other piers we fished as kids, but it was a special place for us. Some of my most fond memories of fishing with my dad and brothers were enjoyed at Aliso. And of course, the working power outlet on every light pole afforded us the opportunity to experiment with using shop-lights to attract baitfish, utilize heaters to keep us warm on chilly South Laguna nights, and even play Super Mario Bros. while we waited for sculpin to bite.

Aliso was where we first “discovered” that you don’t need an 8 foot rod with 30 lb. test to catch 1 lb. sculpin—you could use a trout rod and it would be more fun. It was where I first learned that zebra perch existed, though to this day, I’ve never seen them referenced in any fish identification book. Aliso was where I caught my first halibut, and where I learned how to make bait with a Sabiki—including big walleye perch that would school under the pier. The kelp beds off the end held calicos, sand bass, blue perch, and sheephead. The diamond shaped end of the pier had a spot along the inside rail that would almost always yield sculpin after sculpin, fishing straight down along the piling with a hunk of squid. In all my years of fishing, I can’t remember a more reliably productive spot to fish. Five feet either way along the rail would remain untouched…but right there—guaranteed fish. We hardly winced when we’d unknowingly got poked by a sculpin, and our hands would swell up and hurt for a while. I guess we figured getting poked by fish spines hurts for a bit…but it was nothing that a 7-Eleven hot chocolate and a bag of popcorn couldn’t fix.

I caught my first lobster on the rocks north of Aliso when I was around 11 years old. It was a short, snagged accidentally and released just as accidentally. I had never realized we had lobsters in SoCal until then. It wasn’t for a few more years that I even considered targeting them from piers with hoop nets.

Aliso was well known for its powerful shorebreak and its questionably toxic creek. It seems both led to the demise of the pier, and the concrete and steel structure was demolished in the late 90’s, after being damaged by the ocean. Purists and residents seem to like the unobstructed view of the beach as it is without the pier now, and engineers furthered their cause by stating the area is too turbulent to build a pier that isn’t made of wood.

So it seems, that Aliso pier will live only in my memories, and then, only when I get a little quiet time to myself. I truly miss the place, as much as I miss family and friends that have moved on, too.

Recently, my dad and I drove that old route from Newport to San Clemente Pier. It was bittersweet, remembering all of the different places we’d stop along the way at different times—for bait, fried chicken, cheap tacos, warm drinks, or a bag of ice to keep our catch fresh. On this particular trip, Dad went in to the same old 7-Eleven while I filled up my gas tank (a role reversal that didn’t go unnoticed by me—ten years previous, I made the run inside while Dad filled up HIS van). Dad came out, half-laughing, that the same old fellow that ran the store when we were kids is still there. The gentleman actually remembered my dad, the guy with the six boys who would come in all hours of the night, in the dead of winter, smelling a bit of bait, laying out cash to buy half a dozen hot chocolates, and generally looking happier and prouder than any Dad on earth.