Since 1898, the Ferry Building and its clock tower (modeled after the Giralda Tower in Seville, Spain) has welcomed ships into the bay, dominated the skyline and become a landmark. Today, it is home to the World Trade Center and headquarters for the Port of San Francisco. Behind the building is the landing from which the Sausalito and Larkspur ferries load and unload their passengers. Adjacent to the landing is a plaza that contains a restaurant, a statue of Gandhi, and access areas which have been opened for visitors, including anglers. The area is not always as productive as that down the road at Pier 7, but the ambiance is nice and it remains a favorite spot for many fishermen. It is an area that also tends to be less windy and warmer than Pier 7, perhaps due to the buildings to the west of the fishing area (which help to block the winds coming in from the Gate), and the concrete surface on the pier.

Environment. The pier itself is fairly new, having been built in 1971, and extends 652 feet out into the bay. The bottom here is mud, the pilings are wood and the water is fairly deep (although shallower than that at Pier 7). The water current can be very strong. Fish here are the typical bay species: black seaperch, pileperch, rubberlip seaperch, white seaperch, walleye and silver surfperch, white croaker (kingfish), Pacific tomcod, starry flounder, Pacific and speckled sanddab, sand sole, California halibut, brown smoothhound shark, leopard shark, bat rays, skates, striped bass and small brown rockfish. Jacksmelt are around much of the year and are a daily goal for many of the anglers. Both staghorn sculpin and crabs can be a nuisance, especially during the summer months. 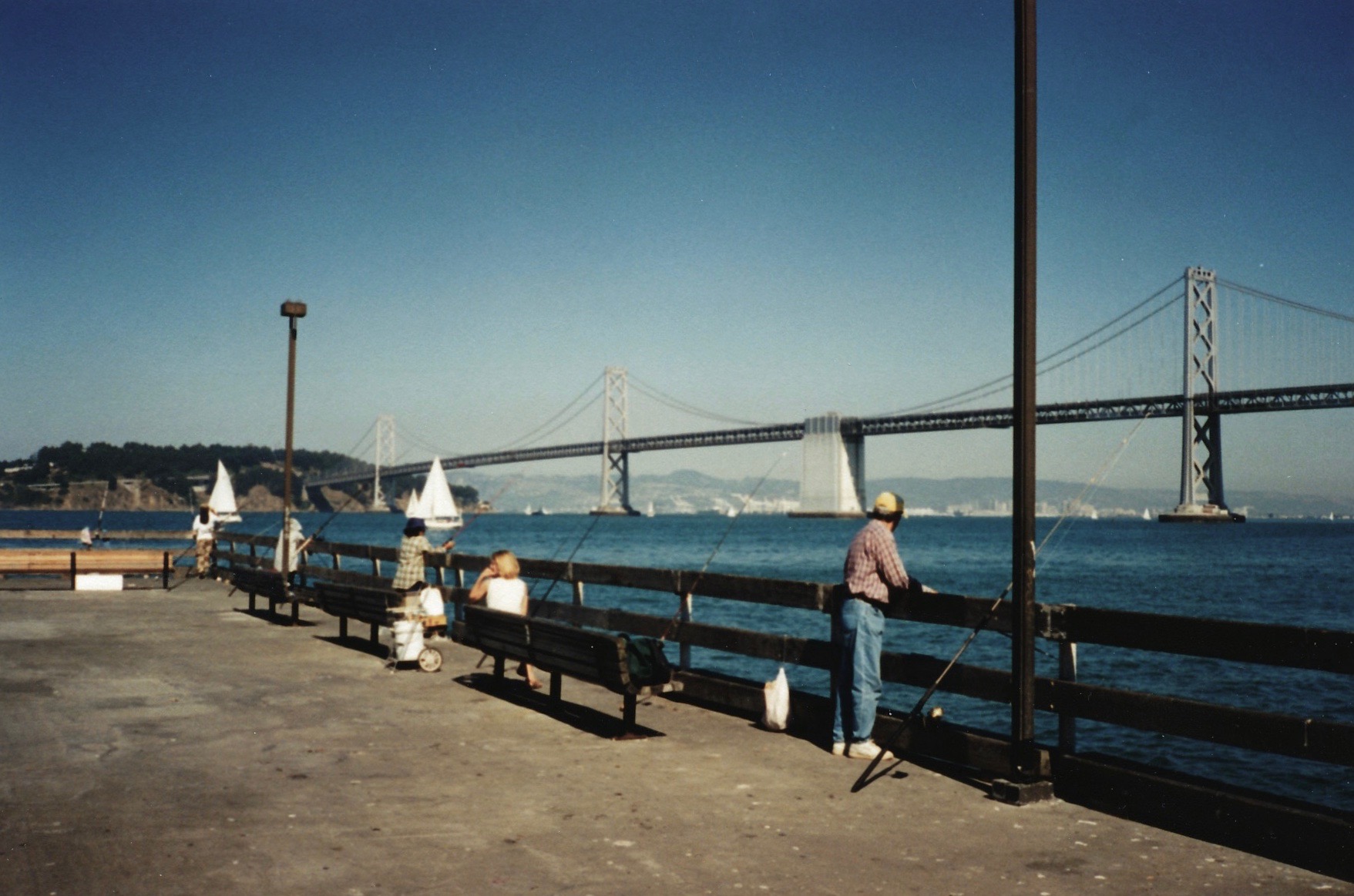 Fishing Tips. In the winter and spring, fish for the larger perch with a high/low leader, size 6 or 4 hooks, and pile worms, mussels, small pieces of market shrimp or grass shrimp. Try the same set-up or a live bait leader for starry flounder using grass shrimp, ghost shrimp, pile worms or cut anchovy.

Spring through the fall are the prime times for sharks and rays. Use a size 2 – 4/0 hook, and fish on the bottom with squid, anchovies or other strong smelling bait (sardines or mackerel). Lots of leopard sharks, brown smoothhound sharks and bat rays are landed in these waters. Be sure to have a way to bring the large critters up onto the deck!

Summer and fall are also the best times for a few striped bass and halibut. For both, a live bait is the best bait. Try to catch a small shinerperch or try to snagline live anchovies (which are sometimes in schools adjacent to the pier). Use a size 4 to 1/0 hook on a live bait leader and keep the bait near the bottom. You might also try ghost shrimp or pile worms but they are not as good. If you are lucky, you might also see a salmon during some years.

Fish the mid-depth area for white, walleye and silver surfperch, as well as a few Pacific tomcod. Try strips of anchovy on size 8 or 6 hooks. Fish on the bottom with small pieces of anchovy, a high/low leader, and size 4 hooks for white croaker (kingfish). Fish near the top of the water with a float for jacksmelt; use pile worms or small pieces of shrimp, and size 8 or 6 hooks.

During the summer be patient! Realize that the normal pests, the staghorn sculpin (bullheads) and crabs are going to grab a lot of the bottom offerings. So, check your bait whenever you get a hit.

February 2010 — Lots of brown rockfish are being reported.

History Note. Until 1873 most of the ferries serving Oakland, Alameda and Tiburon landed at the Davis Street Wharf. That year saw the construction of the original Ferry Building, a somewhat shed-like structure. It was built by the Central Pacific Railroad, located at the foot of Market Street, and served as the western terminus for the railroad. Adjacent to the terminal, the state built slips for various other bay and river ferries. That same year saw the first cable cars put into operation. Soon, the ferries would drop off their passengers who could then board cable cars to destinations throughout The City. Lines ran through the business district, to South Park, the Presidio, and even out to the Cliff House. 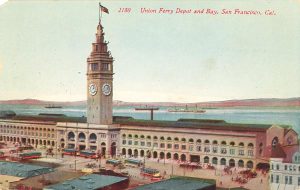 In 1898 the new Ferry Building, operated by the State of California, was constructed and it quickly gained an unofficial title as the “Front Door” of San Francisco, the entrance through which most visitors and newcomers first reached San Francisco. With the opening of the Bay Bridge and the Golden Gate Bridge, both in the ‘30s, the importance of both the ferries and the ferry landing was reduced. Today the Ferry Building is operated by the Port of San Francisco.

Facilities: Only a few! Benches and two sets of restrooms are inside adjacent buildings. There are two nearby restaurants, Gabbiano’s and Sinbad’s, but both are upscale sit-down places. No lights, fish cleaning stations or bait and tackle. Some limited parking on nearby streets and a small adjacent parking lot that is only open to the public on the weekends ($5 all day).

Handicapped Facilities: There should be some handicapped parking spaces on the street when work on the Embarcadero is finished. The surface is concrete with a wooden railing (approximately 40 inches high). A lot of handicapped anglers seem to use this pier.

How To Get There: Same directions as for Pier 7 but this pier is about one block east of Pier 7.