For many, many years, a small private pier was found near the marina in Rodeo. It was part of Frank Joseph’s Fishing Resort and was simply called Joseph’s Pier by most anglers. What perhaps described the pier best are the words hit or miss. When fishing was bad, it was very bad, when it was good, it could be very good. When was it good or bad? It was hard to say; it could be very bad one day and very good the next. There were seasonal variations but they were not as noticeable as piers situated closer to the main bay area.

Nevertheless this was a pier from which many went to sit and relax and hope for an occasional fish; when I lived in the area, I was one of them. There continue to be rumors that a park and pier may someday be built near the site. If so, the lessons learned from the old Joseph’s Pier may prove beneficial for the new pier. 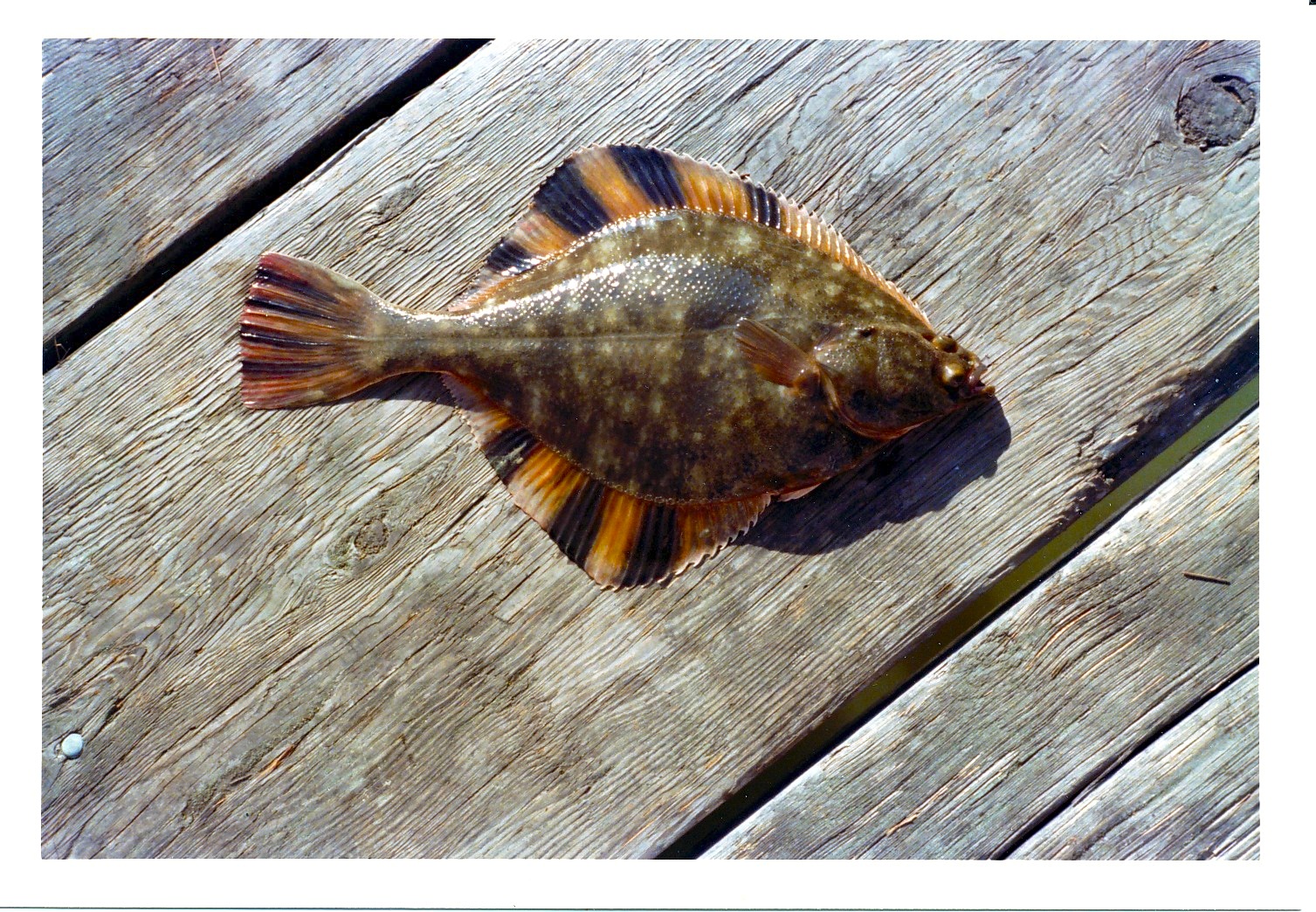 Environment. The old pier was short, jutted out into shallow water, and was located over mud with little vegetation. Nearby were rocks along the shoreline but they seemed to have little influence on the pier fishing. In more than twenty trips to the pier I caught only six species of fish: striped bass, starry flounder, bat ray, jacksmelt, shinerperch and staghorn sculpin.

Staghorn sculpin were hard to keep off the hooks on almost any trip, especially during the spring through fall months. Starry flounder were next in line, being caught about twenty percent of the time. Striped bass were caught primarily in the late fall, jacksmelt mid-summer to fall. I never saw any of the larger perch caught on the pier even though I caught very large pileperch and blackperch off both the Rodeo and Pinole shorelines. Sharks were rarely caught off the pier but I caught bat rays and saw others land skates.

Infrequently a sturgeon would be caught but most of the time you simply saw them jumping out of the water. I have been told that when sturgeon are jumping they will not bite. I doubt if this is true, but I have never seen one caught on a day when they were jumping (at least from a pier). Perhaps the sturgeon thought they were trout and needed a dry fly to entice them to bite! Nevertheless, when you see a five-to-seven-foot-long fish jumping completely out of the water it never fails to impress. 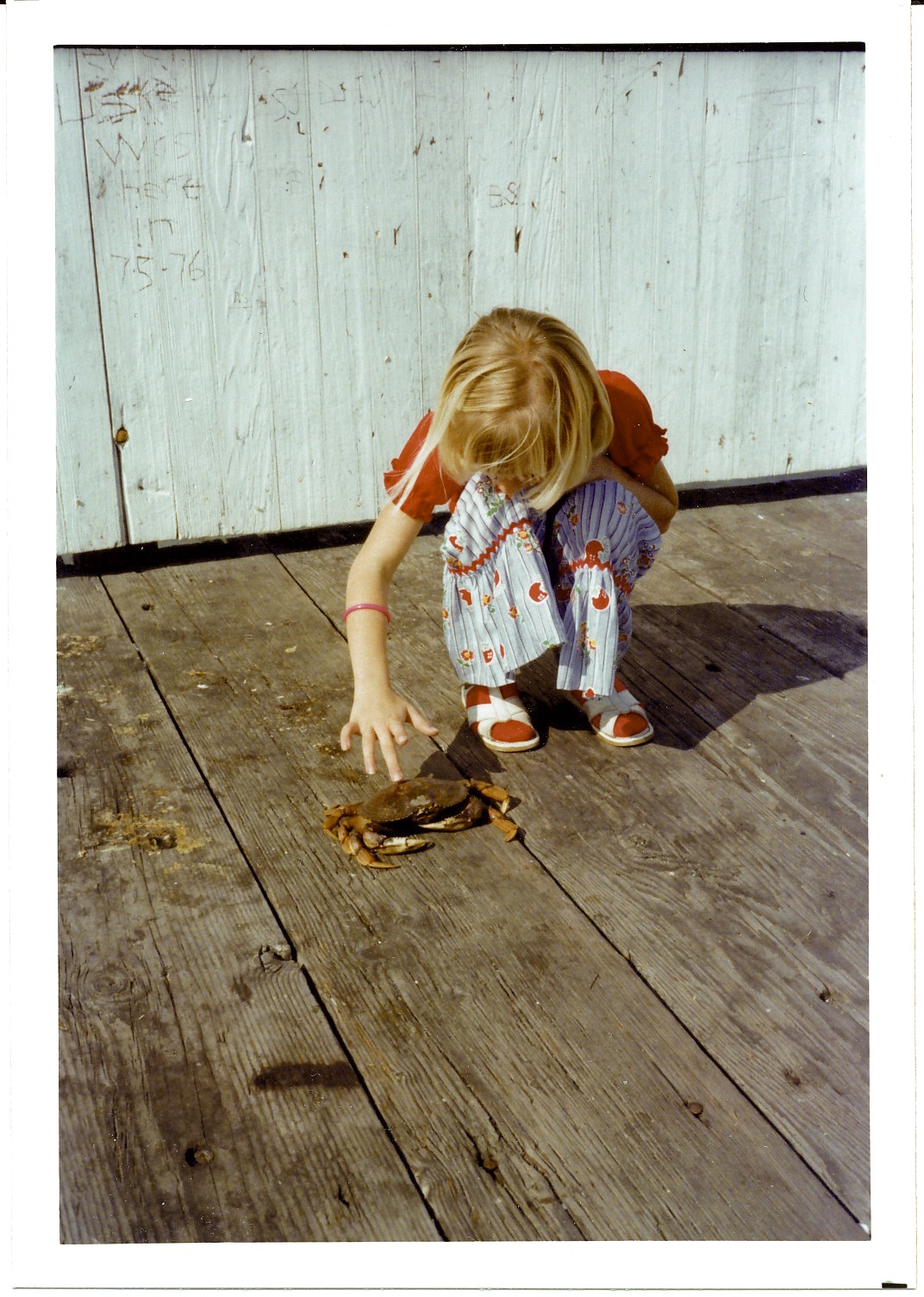 My daughter Kim would sometimes accompany me to the pier. There’s nothing like taking a daughter, son, or grandchild fishing.

Best bet here for most of the year, and especially from December to April, was to fish for starry flounder using a sliding sinker and grass shrimp,  ghost shrimp, or pile worm for bait, and, at times, you might accidentally hook a sturgeon on this setup. Second best was to try for stripers in the fall using pile worms, anchovies, or an artificial lure. A third option was to try for sharks, skates and bat rays using almost any bait, but especially squid. Best fishing for these critters was on the bottom after casting as far as you could from the left corner. If specifically trying for sturgeon, you needed to remember to fish with a heavy outfit and to have a way to land the fish (on a pier, the odds are on the side of the sturgeon).

Frank Joseph of Rodeo reported a short flurry of flounder catching from his fishing pier, but no boats out during the week. Weather has been cod and foggy, especially in the mornings and the water has been badly colored. —The Fishin’ Fool, Ralph Stevens, San Rafael Independent Journal, January 24, 1961

Date: April 17, 2003; To: Pier Fishing In California Message Board; From: Ken Jones; Subject: Is anyone on our board old enough to have fished from the pier at Joseph’s Resort?

Posted by Capt Bags: I fished off Joseph’s and saved up a months worth of lawn mowing and fish cleaning money to rent one the resort’s skiffs. Even though my dad ran a party boat out of old Dowrelio’s, us kids had to break away from the “boat work” and go off on our own. Many times we caught more fish off the pier than on the boat. Plus, out of Pop’s eyes, we were a bit freer to try our own style of fishing. He always wanted us to fish for “the grown up fish.” And while stripers were fun to catch, we had just as much fun going after lowly jacksmelt and flounder.

Many don’t know it, but a small channel, and an old oyster bed is just off the pier leading out to the bay flats. Even though it’s close to shore, a ton of fish feed in that shallow shoal. The best time to fish it was this time of year all the way till early summer. Lots of big sturgeon were caught off that pier. During the fall, some pretty big bass came off it also. And as a kid , if you were broke, you could make pretty good change catching bullheads for the party boat fishermen.

Side note; When we finally rented a skiff. We got a big yellow one that looked like a covered wagon. Nice to get out of the rain, I guess. However, when we got ready to toss out the huge anchor, we noticed a big spider web all around the anchor rope. Inside that web were a couple of the nastiest black widow spiders anyone ever wanted to see. Tell you what, those were two unwelcome “guests.” It was awhile before we got the anchor out. And, we spent a nervous afternoon fishing. We were wondering what else lurked underneath the skiff’s floorboards. And that covered cabin; we just stayed outside.

And, after going all over the bay with that sputtering old Johnson outboard, we ended up fishing just out of casting range of the pier. In a spot we just knew we’d catch a fish.

I fished some of the last days of the existence of Joseph’s Pier.  I remember using grass shrimp and I couldn’t keep the smelt off my line. I also remember the same day the one other guy fishing the pier caught an undersized sturgeon. If I was to fish it today, I would turn those smelt into bait. I would also make sure my leader was extended long enough for my live bait to be able to elude the crabs!

Date: May 4 2019; To: Pier Fishing In California; From: Norman Jacobs; Subject: Sturgeon at Joseph’s Pier

My wife (Frank Joseph’s granddaughter) recalls a Sturgeon caught off the pier that was 92 pounds. Took a few folks to get it in.

History Note. Why the name Rodeo? This was a shipping site for cattle during the Spanish era and apparently many rodeos took place during the roundup of the cattle.

As for the pier, Joseph’s Resort dated back to the 1930s. The resort offered the pier, rental boats, and a launch site for private boats. In addition, you could fish from the rocky shoreline, picnic, or even go swimming from the beach if you so desired. Best for some was the tavern sitting on the shore end of the wharf, nothing like a cold brew after battling monsters in the stifling heat of the bay all day day long.

Boat fishing in Suisun and San Pablo bays and in Carquinez Strait is usually good. And if you don’t want to go out in a boat, there is good fishing off the old Rodeo Pier. — Oakland Tribune, June 17, 1934

At one time the resort was also home to  the city’s aquatic festivals that included the naming of a King and Queen Neptune, the selection of that queen and her court, a parade, a beard growing contest (in which men without beards could be locked up in Neptune’s Brig and paraded around town, and boat races from the beach at the resort. Apparently Frank Joseph was popular since he was also elected president of the Chamber of Commerce for a while.