He still is. Aliso pier is gone, but Dad’s still fishing with his boys.

We’re all just drinking coffee now, instead of hot chocolate. 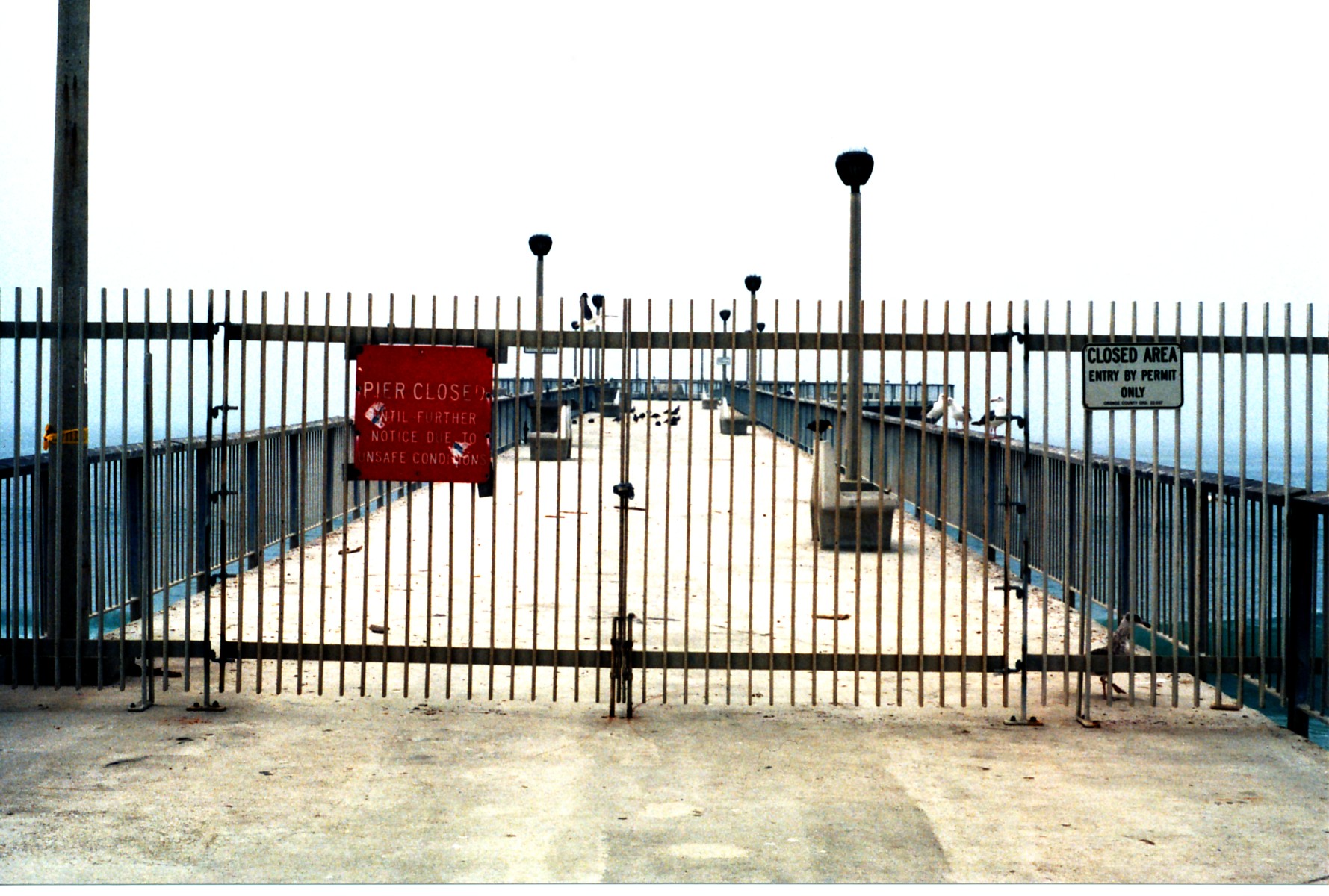 <*}}}}}}}}}>< — When I posted this article in a discussion about the pier in 2005, I got an immediate response from several people. The note that follows the article, again by dompfa ben, was the most poignant. And, the responses to this response are also pretty interesting. Warning, never tick off a pier rat.

Day after day, South Laguna residents watched the sun rise and set into the Pacific from the Aliso Pier. People kissed on it, walked dogs on it and contemplated life on it. But next week, the pier—now largely demolished—will be gone, and county officials are skeptical that it will ever return. Last year’s El Nino storms dealt the final blow to the concrete pier that has been a recreational landmark and fishing hole for South Laguna residents since 1970…

Since demolition began last fall, workers have used cranes to disassemble the pier and pull its pilings from the sea floor…

The loss of the pier…has saddened some. “It used to be that the beach was different from all the others,” said 14-year-old Nikki Lawrence of Aliso Viejo. “Now it’s just going to be a regular old beach.” Lawrence said she used to fish off the pier using a stick and a string.

“I feel like I’ve lost part of my life,” said 87-year-old South Laguna resident Evelyn Kettle, who used to walk on the pier frequently—a doctor-prescribed remedy for symptoms of Parkinson’s disease.

For Ian Levinson, 30, the pier was useful in other ways. “It was a really good place to take a date,” he said. “Now I’ll just have to sit in the sand to watch sunsets.”

But not everyone will miss the pier. “I say ‘Good riddance,’” said Charles Arthur, 80, from a counter seat at nearby Ruby’s restaurant. “I think piers are unnecessary and too costly to maintain. They always go bad.”

Indeed this one had. Last March, after a series of El Nino storms, the county closed the pier to the public when engineering reports found it unstable…

By last spring, the pier’s concrete had chipped away in some areas, several pilings were cracked and steel reinforcements were rusted and exposed. “It had just taken a beating from the ocean,” Sibley said…

Even if officials solve the funding hurdle for rebuilding, they wonder if another beach—with gentler surf—would prove a better location. County Supervisor Tom Wilson said he hopes to keep a pier in his district and will have his office begin researching the feasibility of bringing one back. “If the interest is there,” he said, “I’ll be instrumental in getting one put up…

We’re sorry to see it go. It was a beautiful pier,” Sibley said.

To wit: “I say ‘Good riddance,’” said Charles Arthur, 80, from a counter seat at nearby Ruby’s restaurant. “I think piers are unnecessary and too costly to maintain. They always go bad.”

The dangers and limitations of dabbling in hyperbole are so well illustrated in this quote, that to elaborate on it would be an exercise in superfluity. However, verbosity has always been a hobby of mine. Perhaps he was misquoted, or hopefully, his words were taken out of context (no offense to Ms. Cohen implied…)

But it makes you wonder: What monstrous, magical fish did Mr. Arthur lose at Aliso pier, that so severely damaged his soul, and sent him into such a horrible state of mind?

I could write a fictional present for Mr. Arthur, now a stodgy 86 years old (Editor’s note: Not all octogenarians are stodgy), rife with assumptions of Laguna-localism, miserly behavior, and a sad, lonely life. But it’s much more fun to think that he used to be a fisherman, whose soul left his body just as the line parted between his rod, and a pier-hooked yellowtail that was never to be. Besides, the turgid old crab would probably sue me for libel. Blood from a turnip, sir… 🙂

Then again, one must leave such comments in the distant past, where other asinine antisocial positions once flourished, but have now been dismissed by the truly enlightened, or those who navigate the path thereto. The countless memories my brothers and I shared at Aliso Pier more than make up for the misgivings of such a killjoy, whose heart likely bears more cracks and scars than the pier he so despised.

WOW, remind me *never* to p***-off the DOMPFA!! He’ll fillet your rhetorical okole and serve it to you with a side of fire-seared ego-whupping!

I went down to the pier

An ulua was being hauled in

Caught My First Bonito From There…

All I can say is that it’s a good thing Ben didn’t read the following, a quote that comes from a website dealing with the history of Laguna Beach, especially South Laguna and Three Arch Bay. I must admit though that the home site is actually a pretty interesting site—Light Headed Graphics—even if our views on the pier are 180-degree opposites. I guess some see the rose and some see the briar, I see the rose.

In reference to a post card—“An aerial view postcard taken above Aliso Beach looking south toward Three Arch Bay, with Dana Point in the far distance. In the foreground is the now vanished Aliso Beach Pier — and I say “Good Riddance!” The 600-ft. pier was built in 1971 by an arrogant and misguided Orange County Board of Supervisors at a cost of $670,000. The huge surf from the El Niño storms of 1983 and 1986 damaged the pier extensively. It was refurbished at a cost of 1.2 million dollars, but again, the monster 25-ft. waves from the storms of 1997 finished off this eyesore for good by damaging almost 1/2 of the 35-ft. high concrete pilings…Yeah storms! It was finally removed completely in 1999, allowing our beautiful coast to regain its dignity.

Recycled concrete from this monstrosity went into the construction of the pools and handrails of the Orange County Zoo’s “Coastal Cove” exhibit. Although I’m against the inhumane capture and display of our gentle neighbors in the sea, and protest this exhibit, at least some small measure of good was made from this horrible and unwanted blight upon our coast.”

When wrecking crews demolished the Aliso Pier in the wake of several damaging El Niño storms, residents in South Laguna took comfort in the promises from county officials that they would eventually rebuild the landmark fishing pier.

But two years later, efforts to construct a new pier have stalled, with many beach denizens as well as county leaders concluding that the beach is actually better without one.

For those who live on the bluffs above the beach, the now-uninterrupted view of the ocean cove is more pleasing than the decidedly minimalist 660-foot concrete pier with its distinctive diamond-shaped end.

And that’s just as well, because the county has found that rebuilding the structure would be difficult, if not impossible.

A pier at that location is simply a bad idea, engineers have told county officials. The unusual landscape beneath the water’s surface causes waves to surge from different directions, putting extreme stress on any structure built in the zone.

The wave action would prohibit the type of concrete and steel structure originally there, according to Supervisor Tom Wilson, who represents the area.

Twice in its 28 years, the pier had to be repaired after El Niño storms caused extensive damage. History would just repeat itself, Wilson said, if another concrete and steel pier was built.

The only way to ensure that a pier would last, he said, is to use wood. But that would require massive sequoia trees, about 100 feet tall, as pilings in the ocean floor. Unlike concrete and steel, wood pilings bend and therefore have a better chance of withstanding the pounding of waves.

But the prospect of cutting down a small forest of sequoias for a pier is unappealing, not to mention cost-prohibitive, Wilson said. Anyway, the supervisor said, “even people who live there say it’s a beautiful place without the pier.”

Both Wilson and Bob Hamilton, the interim manager of county harbors, beaches and parks, said that community interest in rebuilding the pier has declined and that many homeowners in the area say they prefer the beach as it is.

Kelly Nalley, 41, of Scottsdale, Ariz., remembers visiting the pier every year with her family as a youngster. As much as she misses it, she admits she thought it was a little out of place. After getting over the shock of seeing no pier, she concluded that it’s “pretty nice to have the view unobstructed.”

Aliso Pier was built in 1971 as the centerpiece of a 4.2-acre public beach development that included a parking lot off South Coast Highway. The 660-foot structure was one of the shorter and higher piers in Orange County. The deck rose 35 feet from the water, held up by dozens of concrete pilings with steel rods at their centers.

In 1983 and 1986, El Niño storms extensively damaged the pier. By 1987, the cracking of the concrete had become such a problem that the county closed the pier for more than two years for a $1.2-million reconstruction project.

But the 1997 storms caused the most damage, cracking or dislodging one-quarter of the pier pilings. In the wake of the rains, the pier was closed. Within a few months, the county decided to tear it down. Initial estimates had put the cost of rebuilding the pier at $5 million, and some officials had questioned whether the county had the money for such a project.

On a recent afternoon, beach-goers like Nalley said they liked the beach’s new look. But others mourned the loss of the pier.  “Now that it’s gone, it’s really sad,” said Debbie Monicatti, 52, of Aliso Viejo. “You don’t have the opportunity to interact with the water, and a pier lets you do that if you’re not a surfer or a swimmer.”

Surfers Sean Pettit, 24, of Mission Viejo and Marcus Hirth, 26, of San Clemente bemoaned the pier’s demise as they stood on the beach deciding if the waves were good enough to ride. The pier “was great for surfing,” Pettit said. “It was my favorite beach until they took away the pier.”

And what’s left of the pier—the building on the edge of the beach that houses the concession stand and restrooms–may soon be removed as well.

The Federal Emergency Management Agency has rejected the county’s request for funds for a new pier. But officials hope FEMA will provide the $400,000 needed to demolish the building and construct a new restroom and snack area. If they get the money, the last piece of the original pier development will be history as well.

<*}}}}}}}}}>< — One of the rocky shore species that could be found at the pier was opaleye and some were pretty decent-sized fish. However, none of the pier-caught opaleye came close to matching the huge opaleye taken by a skin-diver in eight feet of water at Aliso in 1964. The monster-sized fish, one that was more than double the size of the previous state record fish, weighed in at 13.46 pounds and was 25.4 inches long. Given that a five-pound opaleye is considered huge, and that most fishery biologists at the time felt opaleye only reached about six pounds in size, it may be a freakish record that stands a long, long time.

History Note. When the Aliso Beach Pier was constructed in 1970-71, an interesting method of construction was utilized. Pre-cast pilings were floated into place and set by Spider I, an eight-legged machine that moved by retracting and relocating four legs at a time. Designers seemed to think of everything, they even used steel and exotic African woods in the railings to resist scarring. However, the best-laid plans of mice and men often are insufficient when it comes to Mother Nature.