Species: Medialuna californiensis (Steindachner, 1876); from the Spanish word medialuna (halfmoon, referring to the shape of the tail) and californiensis (California, where first found).

Identification: Halfmoon are perch-shaped but heavier bodied; they’re similar in many ways to opaleye. Their coloring is normally bluish-black above, bluish-gray on sides, and light blue below. Occasionally has dark bars on side and has a dark spot above the operculum (gill cover). Their tail is shaped like a half-moon.

Size: Although a record-size fish measured 19-inches and weighed 4 pounds 12.5 ounces, the vast majority that are caught are less then one foot in length. Smaller fish are sometimes found in large schools while the larger fish seem more solitary. 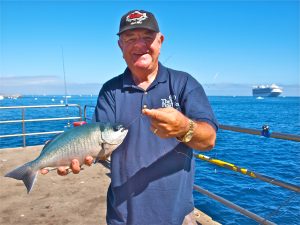 KJ and a halfmoon from the Cabrillo Mole

Habitat: Halfmoon are typically found in intertidal, shallow-water, rocky areas and kelp beds although recorded to a depth of 144 feet. They’re often in small loose schools in the mid-water area and, at times, mixed in with schools of pileperch. 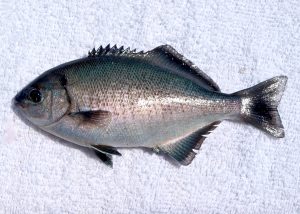 Boats: Although mainly considered an inshore species, quite a few are landed by anglers fishing from boats, especially at Catalina.

Bait and Tackle: Halfmoon will take almost any bait but they prefer fresh mussels, shrimp, or small crabs. When schools are present, a small strip of squid will often work, and you will lose far less bait. Halfmoon caught from boats seem to be less picky and will often hit pieces of anchovy, sardine, or squid.

Boats: Although mainly considered an inshore species, quite a few are landed by anglers fishing from boats, especially at Catalina. 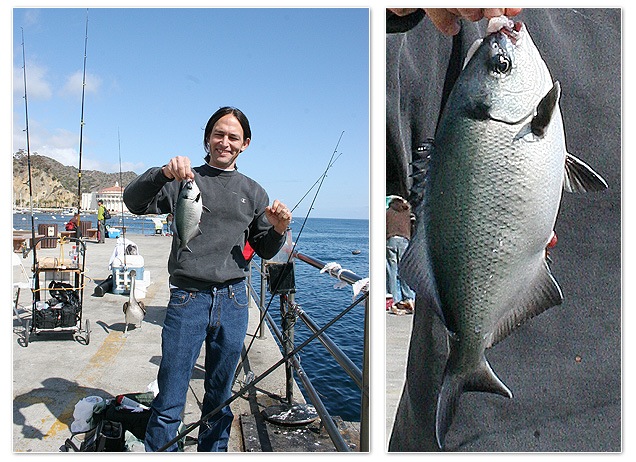 Jimbojack and a halfmoon from the Cabrillo Mole

Food Value: Basically the same as their sea chub cousins opaleye. A good eating fish that is mild flavored, small flaked, firm textured, and low in fat content. It is suitable for many forms of cooking but most commonly fried or steamed whole.

Comments: Halfmoon are good fighters; I think if they reached a larger size they would be prized sportfish. As is, their fight is very similar to opaleye. Their eating habits are also similar to opaleye (both are considered to be herbivorous species that maninly eat plants) but they will eat almost anything in their environment including red, green, and brown algae, sponges, bits of seaweed, green moss, shrimp, mussels, squid, and fish. Apparently they have a hard time deciding whether to be vegans or meat-eaters and that may explain their scrappy and perhaps irritable nature. 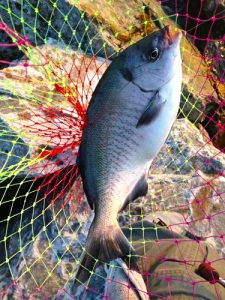 It seems they can also make a quick color change. California Fish & Game, April 1960, mentioned just such a change. “When a half-grown harbor seal escaped from its tank at Marineland of the Pacific and entered the large tank occupied by the fish, a number of adult halfmoons suddenly displayed a striking change in color, apparently as a fright reaction. They developed a dark-gray longitudinal band along the middle third of the side, and above it a narrower, whitish band, contiguous to the normal bluish gray color of the back. This color change may he a cryptic device to obliterate the outline of the fish either from above or from below. (Kenneth S. Norris, personal communication.)”