Species: Heterodontus francisci (Girard, 1855); from the Greek hetero (different) and odont (tooth) and the Latin francisci (referring to San Francisco). (They have a small pointed tooth at the front of their jaw and a blunt tooth at the rear.)

Size: Reported to 48 inches, but the largest verified was just over 38 inches long and 22 pounds. Most hornies caught from piers are under 30 inches in length. 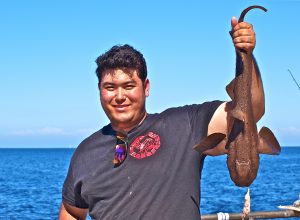 Horn shark caught at the Cabrillo Mole in Avalon

Range: Found in the tropics, Peru to Columbia, the Pacific coast of Mexico, the Gulf of California, and California. Common in southern California and found north to San Francisco Bay and Bolinas Bay, northern California.

Habitat: Prefers rocky areas although also found near sandy areas that contain kelp. They are nocturnal, bottom-feeding foragers who prefer to spend their daylight hours resting on the bottom or in caves and crevices. At night they head out in their search for food—primarily squids, urchins, crustaceans, anemones and mollusks—but rarely are they found more than six feet from the bottom. Found intertidally down to about 650 feet.

Bait and Tackle: Crabs, shrimp, squid and small fish are prime baits but hornies appear to take almost any natural bait. Most horn sharks taken by pier anglers are fairly small fish so light-to-medium tackle equipped with size 2 to 2/0 hooks will suffice.

Food Value: Similar to most other sharks with firm texture and mild taste. Generally filleted and fried in some manner. The skin is tough so have a sharp knife and a whetstone to keep it sharp.

Comments: An interesting little shark. Small horn sharks are frequently sold in aquarium shops where they command top prices. They are generally harmless but anglers should be careful of the dorsal spines and be aware that agitated fish may try to bite careless handlers. 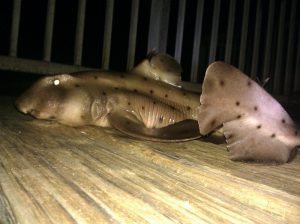