Species: Halichoeres semicinctus (Ayres, 1859); from the Greek words hal (belonging to the sea) and choer (like a pig); and the Latin words semi (half) and cinct (banded, in reference to the color).

Identification: Similar in shape and sometimes confused with senorita; ; have a long and slender body (but considerably deeper than a senorita) and a small mouth with protruding teeth. Their coloring is generally greenish brown with dusky vertical bars; males have a dark blue bar behind the pectoral fin. Lacks the large black spot at the base of the tail fin found in senorita.

Size: Up to 15 inches although most caught from piers are less than 12 inches long. A 12-inch male weighed 1 pound and was 7 years old. 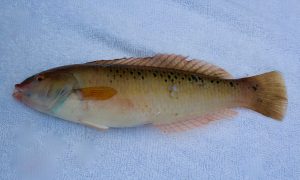 Piers: Common at only a few piers due to their rock-loving affinity. Best bets: Green Pleasure Pier at Avalon (where they are common), Redondo Harbor Sportfishing Pier, Paradise Cove Pier, and occasionally at inner bay piers such as the Shelter Island Pier and the Oceanside Harbor Pier.

Shoreline: Taken near rocks and jetty areas in southern California.

Bait and Tackle: By far, the best bait is fresh mussels or sea worms, although they will bite on shrimp or small crabs. Tackle should be a size 6 or 4 hook and a light leader. Rock wrasse like to grab bait and immediately head back to their hole under a rock so be ready with a quick response.

Food Value: The verdict isn’t in. Some say they’re good, some say not so good.

Comments: This little fish invokes an interesting vocabulary and a somewhat epicene and unconventional sex life. These wrasses are protogynous hermaphrodites, which means in simple terms that they start their lives as females and become males when they reach a length of about one foot. Some sources say all rock wrasses go through this BIG, BIG change, some sources say as little as 5%. Whatever the percent, it must be a traumatic experience. They are also diurnal (another interesting word) meaning they sleep at night. Most seem to bury themselves in sand with only their head sticking out. Reports say they go to bed at twenty minutes before sunset and reappear twenty minutes before sunrise. Since I’ve never witnessed any of these critters wearing a watch, or even a tiny clock, I’m not too sure how they manage this twenty-minute routine? Perhaps the moon acts as the zeitgeber, the environmental cue triggering their strange naptime behavior? By the way, they are not the only local fish that are hermaphrodites, California sheephead undergo a similar feat at about the same size.