Alternate Names: None that I have heard, although I have seen them mistakenly called shinerperch. In Mexico called mojarra enana or perca. 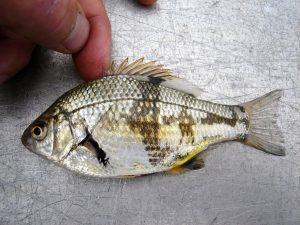 Size: To 6.3 inches. Those caught from piers are normally 4-6 inches.

Habitat: Rocky shallow-water areas, among seaweed, and beds of eelgrass and surfgrass. Recorded to a depth of only 30 feet. Primarily feed on small crustaceans.

Bait and Tackle: These fish are sometimes taken on light tackle by anglers fishing for larger perch. Hook size number 8 and a small piece of bait, especially pile worm.

Food Value: Too small so throw ‘em back.

Comments: They are good striper bait.