Species: Hexagrammos lagocephalus (Pallas, 1810); from the Greek words hex (six), gramma (line), lagos (hare) and cephelos (head, referring to the large pair of cirri on the head, attached to the edge of the eye).

Identification: Five lateral lines on the side, and one pair of cirri on the head. Their coloring is reddish-brown with darker mottling; they often have large, bright red spots and blotches. The inside of the mouth is blue. 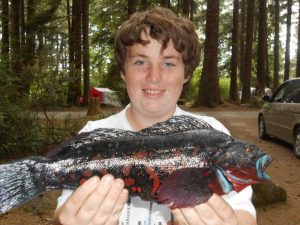 Size: To 24 inches; most caught off piers are less than 15 inches.

Range: From Point Conception to Attu Island, Commander-Aleutian Chain Alaska, and northern Bering Sea. Also the Kurile Islands, Russia to the Okhotsk Sea (between Russia and Japan), Sea of Japan, and Yellow Sea (between Korea and China). Rarely encountered south of San Francisco. 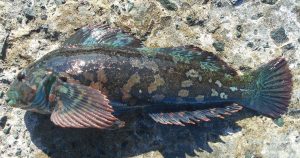 Boats: Primarily an inshore fish so an uncommon catch for boaters. However, those boaters fishing in fairly shallow waters from San Francisco north catch a few.

Bait and Tackle: High/low leaders using size 6 hooks and baited with small pieces of shrimp, fresh mussels, pile worms or tube worms are the best set-up. Like kelp greenling, rock greenling will often tap the bait first and then return for a solid hit so be prepared. 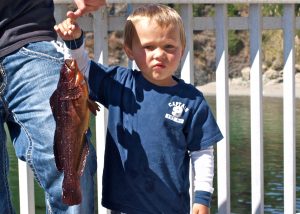 Food Value: Greenling are good quality, mild-flavored fish with large flakes and moderate fat content. They’re suitable for most forms of cooking but they are especially good for pan frying. Most pier caught fish are fairly small so the fillets may not offer much meat.

Also—some books use Hexagrammos superciliosus as the scientific name for this fish. I’m thinking we need a greenling with the name Hexagrammos supercalifragilisticexpialidocious. Perhap it would have some sort of a Mary Poppins look to it?