Range: Reported from Peru and Chile, the Galápagos Islands, and the Gulf of California north to Vancouver Island, British Columbia. Uncommon north of Point Conception and rare north of Monterey. 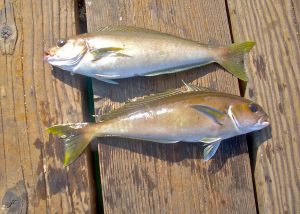 Habitat: Mostly found in offshore rocky reefs and banks although common around some kelp beds; shallow water in summer, deeper in winter. Found from shallow waters to at least 620 feet deep with the largest concentrations at 90-200 feet. Typically feeds on crabs, shrimp, octopuses, squid and small fish.

Piers: Although occasionally seen at southern California piers near deep water or kelp, they are only common at two piers, the Cabrillo Mole and Green Pleasure Pier, both in Avalon on Catalina Island.

Shoreline: Rarely taken by shore anglers unless fishing at Catalina where they are common; Pebbly Beach near Avalon is a good spot late spring to summer.

Bait and Tackle: Usually caught on the bottom though reported to typically feed four to six feet off the bottom. Top bait seems to be fresh squid cut into strips about 4 inches long and half an inch wide. It’s reported that a reverse dropper loop—with the hook on the bottom and the sinker hanging from a dropper loop a couple of feet up the line—can be deadly. Other good baits include ghost shrimp, market shrimp, mussels, worms and small live bait. Light to medium tackle and a size 4 or 2 hook is all that is needed for most of the pier-caught fish. Deeper water fish require stronger tackle.

Food Value: A good eating fish but somewhat bland in flavor with small flakes and a soft texture. The flesh is white in color and low in fat content. It can be prepared with basically any cooking method. However, some reports say that at certain times of the year, in certain areas, it seems to develop an unpleasant taste. As example, some people report a bitter taste from fish caught in shallow-water kelp beds (although apparently there’s no problem with fish caught in deeper waters). J. Charles Davis in his book California Salt Water Fishing (1949, A. S. Barnes and Company) said “an excellent food fish but should be skinned before cooking. The skin has a strong smell of iodine and if the fish is cooked without skinning, the flavor is imparted to the meat and makes it unpleasant. If skinned it is delicious.” I’ve only eaten skinned fillets and they were indeed delicious. 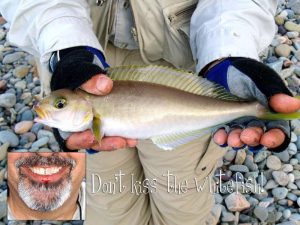 Comments: Care should be taken when handling these fish because they have very sharp serrated edges on their gill plate covers. Their small mouths make them hard to lip latch so use a wet towel to grab and cradle their body. Due to the excellent fighting nature of these fish they are sometimes called the “poor man’s yellowtail.”

One of my favorite quotes (and a quote within a quote) concerns ocean whitefish and comes from Milton Love’s great book Probably More Than You Want To Know About The Fishes Of The Pacific Coast. “Here’s a florid, but fun quote from C. F. Holder’s The Game Fishes of the World (1913, Hodder and Stoughton) about fishing for whitefish at San Clemente Island. ‘Possibly the finest game fish of this region among the smll fishes is the Blanquillo or whitefish… When fishing with Dr. Gifford Pinchot in 1910 we found a rock one day rising to within ten feet of the surface then dropping to a great depth… The zone of thirty or forty feet was evidently devoted to the blanquillo… some weighing ten or twelve pounds. I took so many whitefish that day on the side of that beautiful mountain of the sea, up whose sapphire sides Queen Gulnore might have appeared at any moment, that I never felt quite the same regarding blanquillo.’ So, what’s the deal with the Queen Gulnore and why does she like whitefish so much?”

Queen Gulnore (usually spelled Gulnare is a character found in Fairy Tales from the Arabian Nights and the story The King of Persia and the Princess of the Sea. She was a most beautiful and charming slave who was married to the King Saleh of Persia. Eventually he discovered that she is of royal blood from a kingdom under the sea and reunites her with her family. She chooses to stay with her husband and their child Prince Beder (who is able to breathe underwater and on land). As for whitefish—who knows?